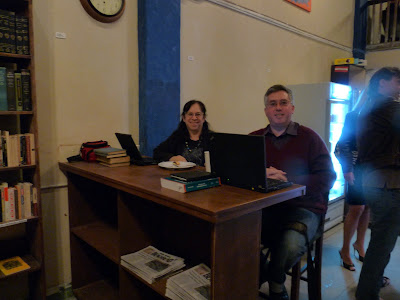 Back where we belong 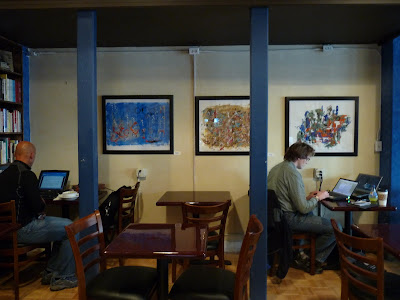 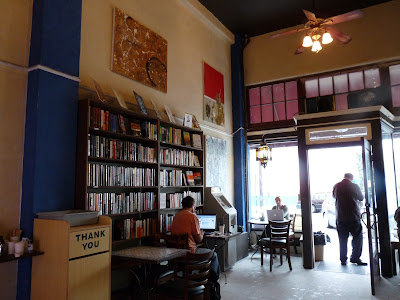 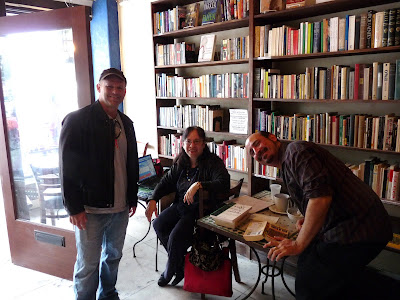 Today was the opening - called a "soft" opening, as everything wasn't completely finished yet, but by any description, it was memorable, and there was much wonder and rejoicing. The Novel Cafe, which closed last month, has opened with new owners. The beloved bookstore/coffeehouse where we have sat, worked, read, written, relaxed, listened to Patsy Cline ("After Midnight") and Tom Waits ("You're Innocent when you Dream"), where we really lived for eighteen years, is now transformed into 212 Pier. This transformation, anxiously anticipated by an entire community, has been accomplished with such painstaking care, taste, love, and respect, as to seem almost a work of alchemy. The beloved old cafe, run down and seedy in recent years, is reborn, a place of beauty! 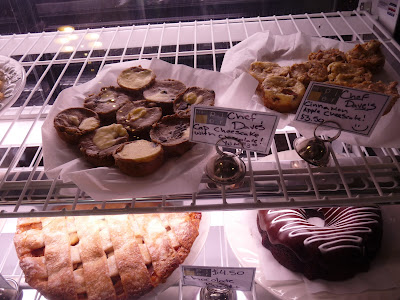 The food is better 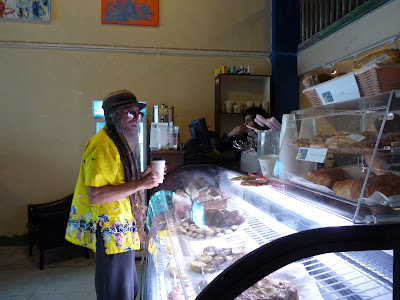 The customers are the same 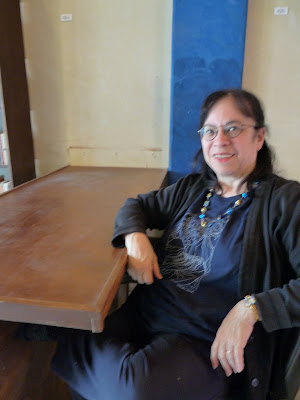 The new owners consulted all us "regulars," and evidence that they listened and took our advice is visible everywhere. For example, when the old owners removed the wooden counter where I sat every night for so many years, the new brooms, Guru and Jonathan, promised they'd build me a new one. Good as their word, they did (it is now called the Birchall/Ferruggia Counter, as Joe also likes to sit there), but just a couple of days ago I tested it out and it was too high to comfortably use a laptop. It had already been bolted into the floor, but Guru merely shrugged and said, "Doesn't matter. We'll fix it." And they did! 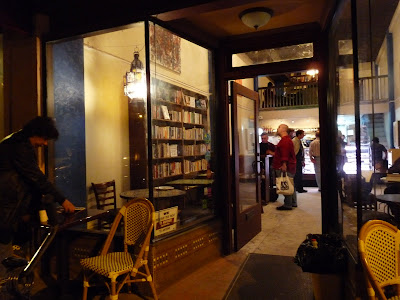 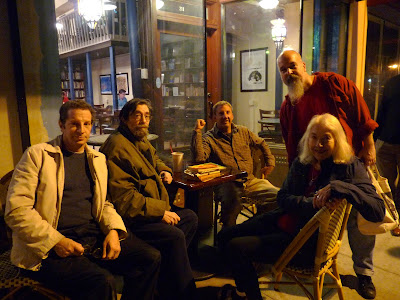 The beauty is in the details. The Novel originated as a bookstore, founded by bookseller Richard Karno in about 1990, and for some years it was a very beautiful place. But it got very run down, and in the end the books were just sloppy toss-outs in no particular order. Now, Rocco, who owns the lovely little bookshop Angel City a couple of doors down, has taken over the books, and even though they're not all on the shelves yet, the arrangement is intelligent, meticulous, scholarly, attractive. The old Novel always had paintings on the walls; the new show is stunning. The old Novel had pretty mediocre coffee, which we drank out of loyalty; 212 uses better beans and the cappuccino is more potable. Evidence is everywhere that the two young men who did the job not only love the place as so many hundreds of people do, but they have the sensitivity and practical intelligence to carry out their faithful yet transformative plans. Well done, guys!

One of the nicest things about today was watching as all the regulars wandered in, one by one. The looks on their faces were lovely, as they saw the refreshed, revivified place for the first time - and one and all realized that the good old Novel hadn't gone, but it was clean and lovely and reborn. There were a lot of smiles. How often are you given a gift that's so much better than you expected?

I've scanned some pictures of my family and friends over the years at the "old" Novel, below. 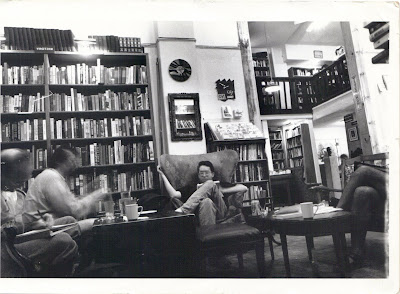 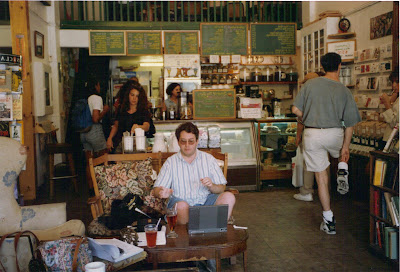 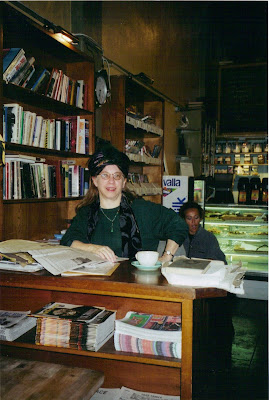 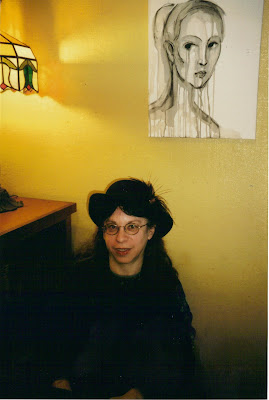 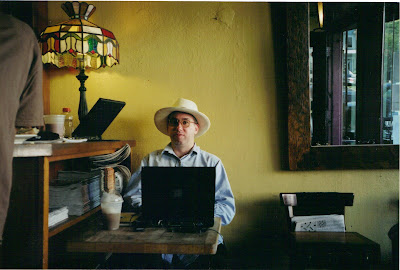 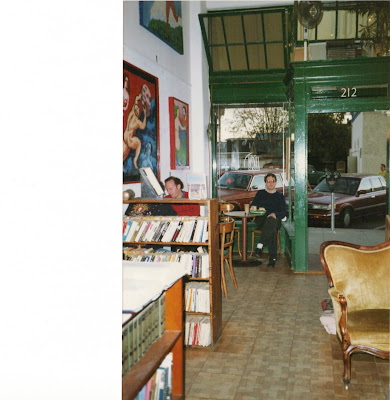 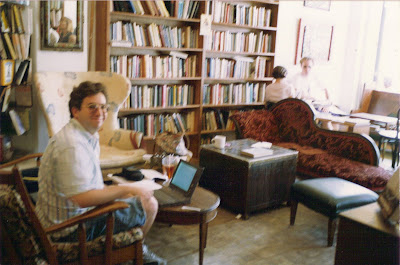 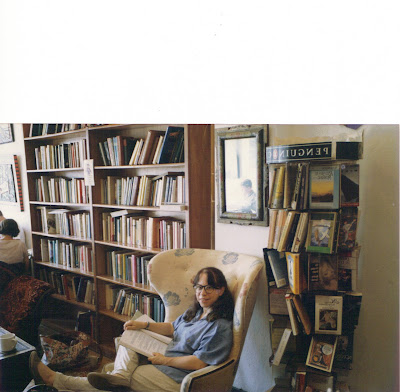 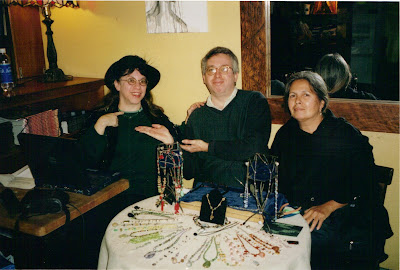 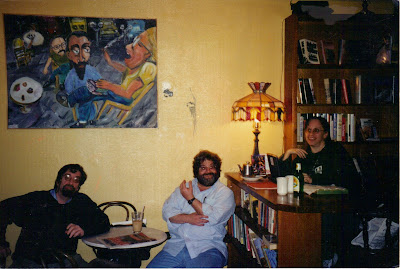 Peter, Andy Klein, and me. We bought the painting of Peter, which hangs in my study at home! 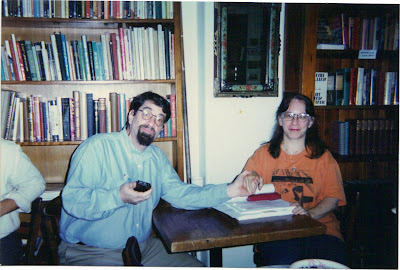 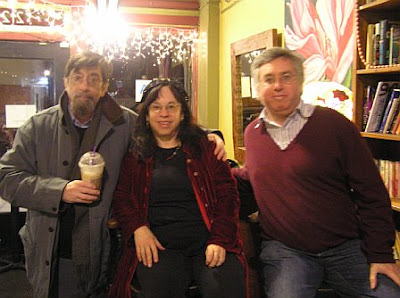 That's wonderful. It's so grand that they were so considerate to the old regulars. I love a good combination of past and future in the present.
~Corwyn Celestial

On my goodness, what a wonderful place. (Laura from Australia.)

Wow Diana. What a lovely place and what a lovely post. You really have deep roots here. I am happy for you about the rebirth.

Voices of the Independent said...

I can't wait to try this place out again. Enjoyed the old place a while back, and was nervous when I saw it being remodeled. Thank goodness they didn't ruin it like the new owners of Anastasia's Asylum did. It's good to know there are still a few great old haunts left.