Kings Canyon and For the King 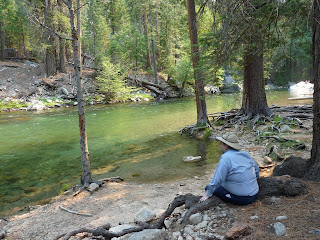 Peter enjoying King's Canyon
Here I am at Cedar Grove Lodge in King’s Canyon National Park, which is the northern part of Sequoia. It’s been a favorite place of ours for years, and perfect for Peter while he’s still semi-convalescing.  No place could be more peaceful. The beautiful Kings River rushes right past the lodge, and Peter loves to sit on the porch and watch the water and the Stellers Bluejays that pop and flit about. 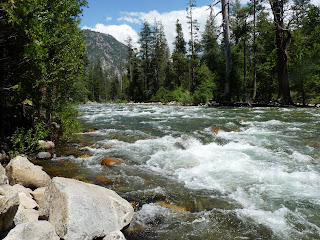 The river runs
Today we drove to Road’s End and took a little walk by the river. But mostly we’ve been reading, and I have read two books by Frenchwomen on this trip: Adelaide and Theodore by Madame de Genlis, and the new historical novel by my friend Catherine Delors, For the King. So I spent the weekend simultaneously in eighteenth century France, and by a very American, western river. Usually in these settings I’m more moved to read Americana, but not this time, and nor was Peter.  For the record, he was rereading Prometheus Bound and Thus Spake Zarathustra, and reading part of The Mahabarata for the first time.  (We are united in our love for reading and writing...but what different books!) 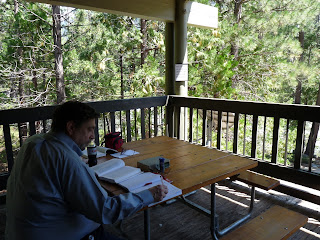 Peter reading on the porch at Cedar Grove Lodge
For the King is a hybrid, being a combination historical novel and detective thriller, and it is exciting in both genres.  The historical background is particularly vivid and rich; in the details, the feeling of living in Paris in 1800, is evoked so well, that you feel you've been plunged into the tense, turbulent, rapidly changing society. The realities of daily life are fleshed out with a full bloodedness that many historical novels don’t achieve. The story centers around a fascinating true event, the attempted assassination of Napoleon by the explosion of a gunpowder cart, or “infernal machine.” Chief Inspector Roch Miquel, a clever and likeable detective, has his hands full with taking evidence while walking through a minefield of political maneuvering, in which his own peasant father, a former Jacobin, is faced with the guillotine.  The mystery plummets along urgently, laced with danger, politics, sex, fashion, and love - a rich French potion. 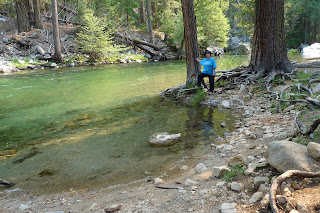 Me in Kings Canyon

Wild raspberries, picked and eaten...
I’ve read little about France, concentrating on Jane Austen and England, but France and its political events impinged upon Austen's life, and I enjoyed reading this story set in the France she knew about (though never visited), through her cousin, Comtesse Eliza de Feuillide, whose husband was guillotined.  Jane Austen also read Madame de Genlis’s book, Adelaide and Theodore (Adele et Theodore, in French), as is evidenced by her mentioning it in Emma, in talking about Mrs. Weston's new baby:

"She has had the advantage, you know, of practising on me," she continued -- "like La Baronne d'Almane on La Comtesse d'Ostalis', in Madame de Genlis' Adelaide and Theodore, and we shall now see her own little Adelaide educated on a more perfect plan."

So I’ve always meant to read it, and obtained a translated copy thanks to my useful almost-librarian son Paul, who downloaded it from the ECCE site; I also found the introduction by Gillian Dow online. 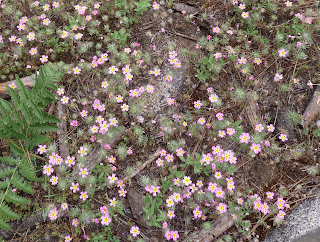 Gilia
Adelaide and Theodore is very readable; the style and attitudes took me back to the world of Les Liaisons Dangeureuses, written in the same year (1782) and which also would have been known to Austen. Gillian Dow writes, “As portraits of decaying and corrupt Ancien-Regime high society, the two novels are remarkably similar,” and that’s what I felt. These baronesses and viscontesses, writing to each other, remind me of Laclos’s characters in their epistolary style; but they are writing in milk-and-water fashion, like Hannah More out of Jean-Jacques Rousseau, about how to bring up children – instead of how to attract and corrupt lovers! But, being Frenchwomen, the subject does shift from whether or not to teach your boy Latin, to how to conquer one’s own proclivities to coquetry. Written in 1782, when Mme. de Genlis was thirty-six, she delivers a feeling opinion on being a fading beauty. “I think there is one time of life very dangerous for women, who are not entirely free from coquetry. It is when they are still handsome, but no longer possess the brilliancy and charms of youth, nor are talked of for their elegance of person, which now ceases to attract admiration. In short, as soon as it is said of a woman, she is still handsome; that still spoils the compliment.” 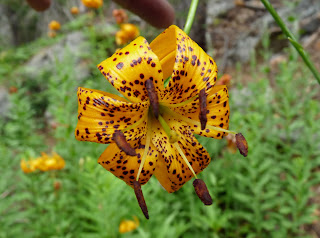 There can be no doubt that Austen knew a good deal about this ancien regime French society, its manners and morals - her cousin Eliza was a "living rule" example of it, and Austen's own Lady Susan, the portrait of a character who seems more French than English, is proof positive.  In Adelaide and Theodore so far (I've read only the first half) I've detected only a few places that made me think might have influenced Austen, or given her thought. “Genius [in a woman] is a useless and a dangerous gift,” writes de Genlis. “It lifts them out of their proper sphere, or serves to disgust them with it.” What would Austen have thought, reading that? Perhaps it’s why she wrote in Northanger Abbey, “A woman especially, if she have the misfortune of knowing anything, should conceal it as well as she can." 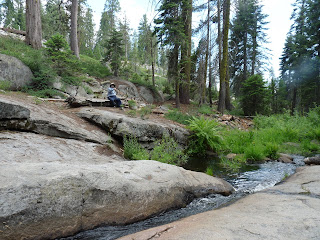 The mention of studying history with “emperors down to Constantine” recalls a phrase in Mansfield Park, while “an artful woman may be able to govern a weak and narrow minded husband,” may put us in mind of Mr. Collins and Charlotte. But these are stray thoughts. More interesting is the France I read about in Adelaide and Theodore, one of aristocrats leading a life exquisite except in the complete lack of modern medical science (a woman is bled for her headache, and bears her pain nobly so as to teach her children to do the same), and how very different it is from the France in For the King, which takes place six years after the Reign of Terror and shows the lower orders as Austen and Genlis never showed them. Nothing could make clearer how the Revolution changed France, than reading this pre-Revolution book, side by side with the novel set in the turbulent post-Revolutionary France. 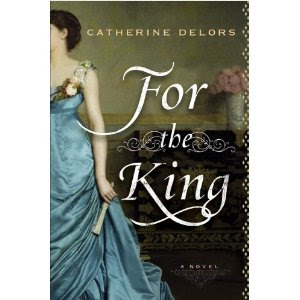 And then I looked up, and there was the river...not the Seine, but one beside which, in 1800, Indians shot deer and ground acorns.  On the last night, I stepped into the woods for a last look at the darkling river, and I came upon the largest black BEAR I ever saw:  a veritable monster, cinnamon dark, most busily engaged in nibbling raspberries from the very bushes where I'd picked some earlier.  I hastened back to the car, for he was a noble monster indeed.  Like this one, only...bigger. 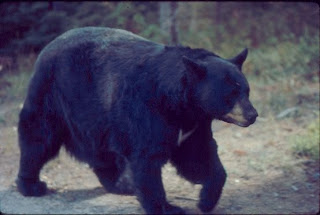 Monsieur Ours
Speaking of animals, the cats had an emotional meltdown at our being away (or possibly Paul had one, trying to meet the pampered neurotic fears and fancies of all three).  When we got home, it was clear that the cats had all concluded, as one, that we'd died, and therefore our reappearance after three days was as if we were ghosts.  They ran.  It took an hour or so to win them back, and then Pindar appropriated me and would not allow Marshy to approach, which made her skulk.  Oh, it was a tempestuous evening!
Posted by Diana Birchall at 5:32 AM

What a great post! Great pictures too. You transported me back to California...

Needless to say, I am more than flattered to be read along the notorious Madame de Genlis.

Thank you for this post...I enjoyed your journey both into the wilds and into old world France...

Reading and enjoying your post, Diana, and thinking 'How blissful' and 'How idyllic' and then I saw that bear and thought 'No, perhaps these idyllic-looking places are not for me after all'. Then I smiled and thought: "Exit, Diana, chased by a bear" (with apologies to Shakespeare's Winter's Tale). Glad you made it! Barbara