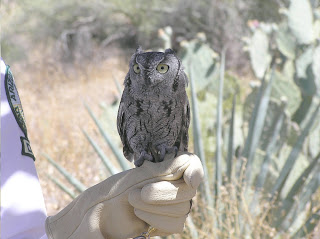 Work sent me a 550-page manuscript by a top chick lit author to urgently read and write up by Monday morning. Finished printing out book at 7 PM, hurried to the airport for my 8:15 flight and was the last person to check in on overbooked flight. Fortunately a volunteer accepted a free air coupon and I got on. I never realized how fast it is to Tucson, less than an hour and I only had time to read the first 50 pages of the manuscript.

Arizona Jane Austen Society organizer friend Bobbie met me, and drove me to her lovely home outside Tucson. They have four cats and I'd anticipated having to call 411 from respiratory failure (nothing's too big a sacrifice for a Jane Austen weekend), but was pleasantly surprised: not a sniffle or a wheeze. The house is tiled throughout, no hairy carpets, and so beautiful - Bobbie and her engineer husband and clever sons have clearly made their house a labor of love and it's full of art and books. We sat outside in the cool evening air among the desert plants, me scarfing leftover shrimp and pasta, them drinking wine (I couldn't, my goal was to finish 200 pages tonight). However, I had a major anxiety and insomnia attack, and despite ultra comfortable bedroom, slept not one wink. It occurred to me with some force that covering a 550-page manuscript was not commensurate with giving a major talk, appearing in a play reading, meeting a raft of new people and longlost relatives, and seeming intelligent throughout, on no sleep. 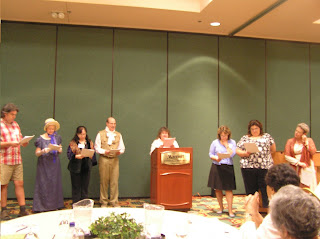 Nevertheless arose officially at 8, and we drove to the Tucson Marriott, an attractively desert-style landscaped hotel, where the Arizona Janeites gathered in a conference room. My dear cousin Dorothy, now in her 80s, was there with her sweet daughter Peggy; they live nearby, and I haven't seen them in a dozen years, so it was a warm and lovely reunion, and I much appreciated their coming to a Janeite event to see me. I believe it was a success for them too, as they afterward earnestly emphasized that they were going to reread Emma. The Tucson Janeites are a warm, lively, and casually dressed lot (I feel it is safe to say that Mr. Elton has never been portrayed wearing shorts before). The first speaker was imported from California, like me; Kay Young, a professor from UC Santa Barbara read an excerpt from her forthcoming book, Coming to Consciousness: Mind, Body, Emotion and the 19th-Century English Novel. It was excellent and made me see Emma's imaginings in a new light - how Austen didn't use specific visual objects and images but portrayed Emma's mental state to an unprecedented degree throughout the book, so much so that it was almost a textbook of how imagination works.

I gave my talk, "Mrs. Elton in the Desert Air," next; it was the same talk I gave in New York, about Bristol, the slave trade and the social influences that made Mrs. Elton more worldly and modern than the other denizens of Highbury. I simply changed most of the New York references to Arizona ones, but was pleased that they still got the Bella Abzug joke, and liked the one desert quote I managed to dig up and insert in the title. It went well and there were plenty of questions. Then lunch, after which we did the reading of my playlet, with considerable spirit and brio, to a good laugh count, whatever the sartorial standard (actually, a couple of people wore elegant Regency costumes, which gives a piquancy when standing next to those in flip flops). This was followed by more discussion, and then an ambitious musical program - Janne Irvine played, sang, and did Austenian recitations with sprightly vigor, the more remarkable because she is blind. She gave us the one-hour version of a two-hour program, which was just as well, as the chock-full program, running from 9 AM to 4 PM, was necessarily long, and with my sleepless night, I was in danger of being sung to sleep. 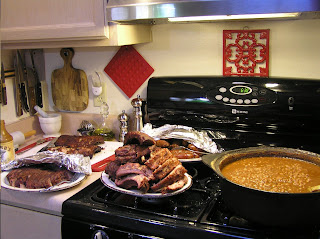 Cooked in the smoker all day...

Back at Bobbie's house, I read another hundred pages, and then Janeite guests trooped in for a truly fabulous barbecue. The ribs and beans had been smoking all day in the smoker, and I never tasted any with such a flavor and tang. If they were in any doubt about my rapturous compliments, the bones were evidence: I consumed eight ribs and untold amounts of homemade coleslaw with lashings of beans. Obviously sound sleep would have been well nigh irresistible after this, but I read until I finished the book, then took half an Ambien at 10 PM, and next thing I knew it was 6 AM and time to sally out into the desert. 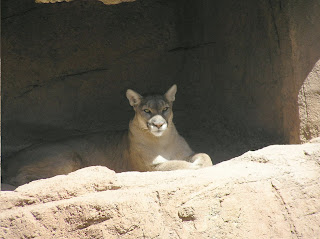 Since it's so hot in the afternoons (about 100 degrees), mornings are the time for sightseeing, and we drove to the Arizona-Sonora Desert Museum, which certainly was worth seeing. It's landscaped habitat with desert animals living as they do in the, well, desert. The wolves and foxes were sleeping, but we saw a magnificent mountain lion, some leaping bobcats, lizards and prairie dogs and many birds, including a woodpecker pecking away on a saguaro cactus. My favorite was lovely Granite the little screech owl, who sat docilely on a docent's wrist. It's a fascinating, unusual museum, the only one I've seen with sunscreen dispensers built into the bathroom walls, and free iced tea to members: http://www.desertmuseum.org/ 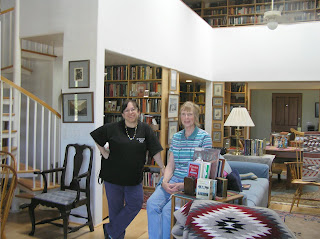 Then we drove to Tubac, where old friend and book collector Lucy lives; she was Regional Coordinator of the Jane Austen Southwest group after I was, back in the early '90s, and she's been much missed since moving to Arizona. But it obviously agrees with her: she's radiant and full of projects and her house of books has to be seen to be believed. Tubac is a cute upscale desert chic town, and we had a lovely lunch at a bistro surrounded by beautiful hollyhocks and cacti, with a mist sprayer cooling the terrace (Bobbie has one too; mist is sprayed down from the ceiling and you sit under umbrellas). Wine Country Salad, pecans, dried cherries, grilled Portabella mushrooms, gorganzola and greens, delicious. Then we drove to Lucy's house, a modern white structure on vast expanse of foothill land, it's basically a monument of books in the desert. The house is also filled with a lifetime's worth of Lucy's beautiful collectibles, ranging from Navajo hangings to English engravings, but it's the books...first editions of Jane Austen, complete run of Household Words, and enough collections of 18th and 19th century women authors to happily populate a Chawton Library West. Was particularly charmed by the quaintly illustrated books of the Rt. Hon. Lord Brabourne, Friends and Foes from Fairyland, Queer Folk, and Higgledy Piggledy, and by a copy of Orlando with Virginia Woolf's own signature in purple, with the three little dots in an eccentric row. Went away muttering "must try to get a copy of Hary-O, the Letters of Lady Harriet Cavendish, and Arthur Fitz-Albini..." It also made me vow to go home and organize my books, which reminds me of a quote from Emma:

"She did unfeignedly and unequivocally regret the inferiority of her own playing and singing. She did most heartily grieve over the idleness of her childhood -- and sat down and practised vigorously an hour and a half." 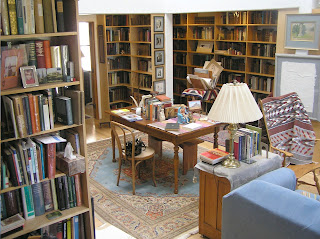 Laden with books (Lucy gave me Artless Tales by Anna Maria Porter, one of Juliet McMaster's publications, and a Chatsworth gardening book signed by the Duchess of Devonshire), but with my suitcase still lighter on the whole, as I'd sold many of my Mrs. Darcy's Dilemmas, I parted regretfully from Lucy and the vast majority of her books, and Bobbie kindly drove me to the Tucson airport. There was wireless internet and I sat with my laptop looking out at the mountains and commenced my write-up. Very fast smooth trip home, stopped to pick up some kabobs for dinner, another stop at the Novel Cafe for a cappucino to keep me going, and then home, where I finished my write-up by a tidy three AM. And so it was done.
Posted by Diana Birchall at 1:50 PM

What energy you have Diana! I was amazed that you could pack so much into a weekend and still have time to read a manuscript. What was that like BTW?

I was intrigued by the misters at your friend's place. We have low humidity here in Hunter Valley NSW Aust and I am always getting zapped by static electricity - around 30 - 40%. It is hard on your skin and I have to keep reminding myself to moisturise.
Chel

Yes what stamina. I enjoyed reading it.

Did I read correctly? FIRST EDITIONS of Jane Austen? Wow, I am surprised that you were able to tear yourself away from those Diana. Being a book freak myself, I think that I would have fabricated some story about not being able to leave, ever. (No reason to go anywhere else, right?)

I always love your writing Diana but you know me, it was the description of the food I loved best - my mouth is watering at the thought. Wish I could have been there to witness Mr Elton in his shorts!

Your description of Tucson reminded me of the AGM there, including a wonderful performance by Janne Irvine. I admire your interweaving your work with the talk you gave and time with friends. Thanks for incorporating photos as well!