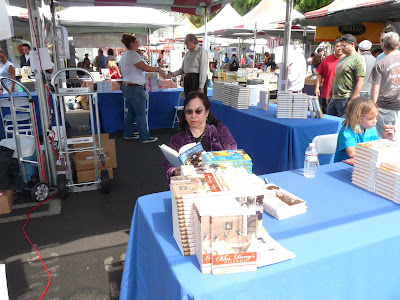 Me Selling Books (not)

Oh, Lord, I suppose when the Women's National Book Association asks you to speak on a panel about women's books at the West Hollywood Book Fair, any old writer worth her salt will pant like a steaming warhorse at the sound of battle. So I duly accepted the invitation, and went, fortunately escorted by Paul, who knows his way around West Hollywood and helped me find the megalithic monumental Pacific Design Center where we were to park, as I couldn't have found the entrance to that monster electric blue cube if my life depended on it. From there we crossed the street to the park where all the fair booths were set up, and we found the "Women Rule" Tent. Friendly, deft speaker Kelly, president of the local WNBA chapter, met us, and the other speakers arrived: Dori Carter, who's written a book of cynical short stories about Hollywood expressively entitled We Are Rich; Syrie James, author of the big best sellers Lost Memoirs of (respectively) Jane Austen and Charlotte Bronte; and Estherleon Schwartz, whose self published book Tears of Stone and My Deal With God tells of her escape from Nazi Germany, living as a welfare mom in a cockroach infested apartment (in Beverly Hills, that is), and becoming Head of a Clothing Empire (House of Cashmere) and a Cantor. 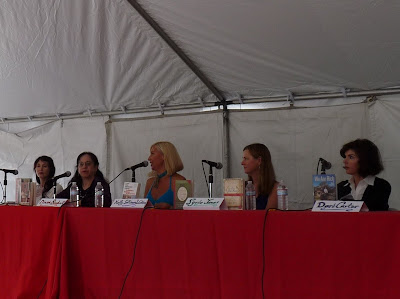 I couldn't conceive how Kelly was going to bring this panel together, though the omnium-gatherum panel title "Ordinary Women, Extraordinary Lives," was some clue. But she accomplished it, and I was impressed - she did her homework, seemed very familiar with all our books and stories, and pounced on the things that connected them. Dori's talk about how little the veniality of Hollywood has changed connected to my talk about my grandmother Winnie's time in Hollywood; there was a Jewish thread through all the talks; and of course Syrie and I are both Jane Austen writers. Kelly asked questions and gave each of us a chance to talk a little about our books, so I talked about both Mrs. Darcy's Dilemma and Onoto Watanna as celebrations of women writers, and also pointed out that my grandmother was an ordinary woman who led an exceptional life, while Jane Austen was an exceptional woman who led an ordinary life!

So far, so good. The panel ended with Estherleon and her Indian-from-India partner singing one of her poems, which she did in her best cantor style, fluting like a shofar, really very moving. For a sample, check out her website: http://www.estherleon.com/index01.html She was a very sweet lady, who admirably combined the qualities of glamor and soulfulness, and although her story sounds unbelievable, it turned out to be interesting and genuinely emotional. Syrie's work is commercially super successful, and I've met her at a few Jane Austen events; she knows how to sell, and I feel I can watch her and learn! I found Dori intriguing, too. It turns out that her husband is Chris Carter, the creator of The X Files and Milennium, but neither of them were at all what you'd think...he was a very unassuming, pleasant, approachable guy, there to support his wife. Dori herself was reticent rather than pushy, and gleams of wit and cynicism about the movie business and its rich denizens kept breaking through attractively: we liked her. They live up in Montecito with dogs and horses and like Jackson Hole a lot (as do we). 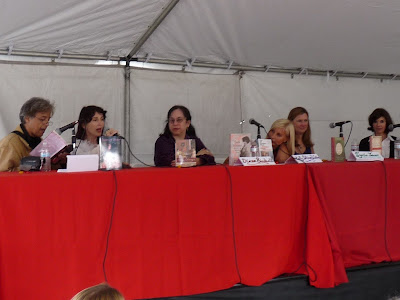 Estherleon and her Indian Friend, Singing

The disappointment was the usual thing: We gave a party and nobody came. There really weren't many people at the fair, mostly just the few dozens of assorted invited authors, all hawking and balking, i.e., hawking their books forlornly and balking at buying each other's. Except for meeting the other speakers, we could've stood in bed. And I felt guilty that Book Soup had taken the trouble to order books of mine and nobody was buying. I flogged Jane Austen and my grandmother with all I had (well, truthfully, rather half-heartedly and resignedly), but it was no use. They wouldn't look. They wouldn't buy. The expensive cupcakes moved faster than the books.

On the way back to the parking, a cheery guard of whom we'd asked directions before, asked if we'd had a good time. "Well, no," I replied, "we didn't sell any books." "Oh, that's no surprise," he said. "Let me show you something. See that building there? On the corner of Melrose?" We looked. Yes? "Well, from there - down three full blocks - there is not one single store that is still open. Not one. Three blocks down there's a bar, that's still open, but for four blocks beyond that, not one store. They have to keep the windows looking nice, so you can't tell, but this whole stretch of Melrose Blvd. is out of business." And indeed, only when you peered hard could you make out a "For lease" sign or two. On what used to be one of the busiest parts of one of the biggest fashion streets in Los Angeles. "And the Pacific Design Center, here?" the guard continued. The megalithic cube, yes. "Well, only one suite is rented now. This whole place is a shell. You know, I don't think the recession's going to get any better. And Obama will be a one-term president."

You heard it from the security guard.
Posted by Diana Birchall at 3:54 PM

At least you learned a valuable lesson, Diana: in a recession, sell cupcakes, not books!

Seriously, I don't think people outside LA realize how hard it has been hit by the recession. My own neighborhood (Downtown) just a few miles away, is now a ghost town. So sad...

How sad - and so different from the Brooklyn Book Festival where we sold a ton of Austen books and got 160 on our mailing list. Also there was a children's book festival at Columbia U yesterday and it was very crowded with families, buying lots of books. Either NY hasn't been hit as bad or book lovers in NY don't care - they still buy.

Meeting the individuals is important and so there you gained "social capital." Jim quickly learned his idea for Isabel wouldn't work, and we bought home Literary Marketplace. She then discovered many many publishers will not accept anything from a writer without an agent. She found a few which would accept a letter of inquiry without an agent and sent off 4 letters (one to source books) and she has about 3 which will accept a manuscript without an agent.

Onto the depression: it's a depression, not a recession. People forget that the low in employment was 1934 not 1930. See Moore's Capitalism where he concentrates on the visibile: foreclosures. Obama is not mentioning jobs programs anywhere; no one else on TV does either. It's a sort of conspiracy: have the wealthy who engineered the destruction of the old order since Reagan paid everyone off?

I agree; if Obama does not act to make a jobs program, if he does not directly pour money into ordinary people's businesses, stop foreclosures and start rebuilding the US in the way Roosevelt did, he's a goner. And he deserves to be. He's betraying the people who put him in office.

Where we are we see empty malls; on my block we have two empty houses (not foreclosure but not sold). One understandable reason Izzy is not keen to go to career counselors is they have no lists of jobs.