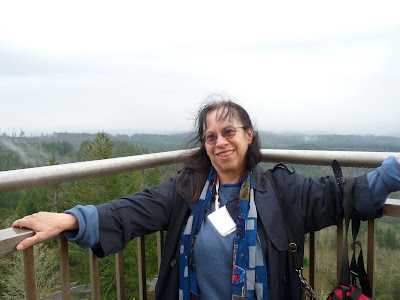 On top of Astoria Tower, Oregon coast
Easy flight, didn't have to wear the tricorn hat on the plane (made other arrangements).  Got here too late to register for a banquet table for Saturday night.  Had a hamburger and turned in, but didn't sleep much (missed my cat Pindar's four pointy little feet running over me all night).  In the morning I bore down on the conference registration table which was to open at 8, but my friend/roommate Jane and I were leaving on our Columbia River tour at 8.  So I pushily demanded they open, in fine operatic New York street style, which bad behavior was worsened by my cutting dead conference organizer Susan Schwartz by not recognizing her, until she had to protest, "Diana, we have met many times before!"  This kept happening all morning as I failed to recognize one old friend after another and tried to pass it off with witty repartee, most unsuccessfully. 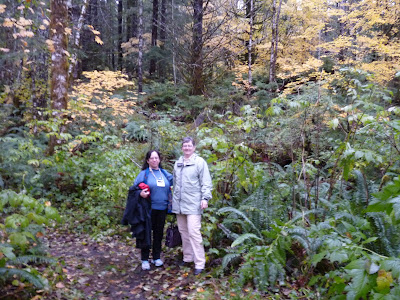 Me and Lindley in the rain forest
Breakfast was an uninspiring $14 steam table hotel scrambled egg, so Jane and I nipped to a McDonalds and I had my first Mickey D breakfast ever:  a biscuit, egg, and miscroscopic piece of bacon, $3.  That and a utilitarian Starbucks cappuccino "set me up for ever," as Lydia said.  Then we were joined by my non-Janeite visiting friend Lindley from Kamloops, and briskly boarded the bus (two busses, 90 Janeites).  A two hour bus ride through farmland and rain forest on a lowering, gloomy day.  We stopped in the middle and were allowed a short hike to a stream, where the air smelled like champagne poured over moss:  exhilaratingly refreshing. (Um, there were proper loos as well, I don't mean to make it sound like we dampened the stream.) 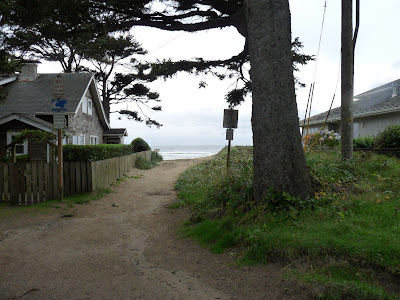 At Cannon Beach
Back on buses were drove to the little town of Cannon Beach (a cannon washed up there once, also a whale).  Lovely evocative beach, windswept under dark clouds, with a striking monolith called the Haystack that is on all the T-shirts and tote bags sold in the rather twee town.  Pretty wooden houses, obviously subject to lots of weather, many duly marked Historical.  The main street mostly consisted of art galleries, cafes, teashops, more art galleries, bakeries, a bookshop, a market, and more galleries, and we were there for an hour and a half; we'd rather have been dropped off at the tidepools of the Monolith.  But we walked on the beach, and bought local specialties at the bakery (a maple bar doughnut and marionberry turnover).  We got the idea that October is a slow month, when a lady ran breathlessly out of one of the tea shops and asked with great excitement, "Are you off those two buses that just arrived in town?  I saw them!  My friend said, my lord, look, there are two buses full of people pulling into town!"  We calmed her, and went on. 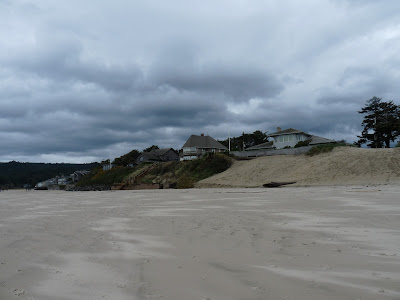 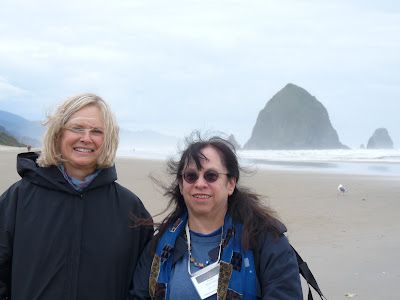 Jane and me and the Haystack
Back on the bus we drove to lunch at a former cannery on the river, just outside Astoria.  Attractive place with a river view, but the food was a universally crashing disappointment. Of course we all wanted Fish, and the restaurant actually had a lovely seafood menu.  But being a group, we got a buffet.  The clam chowder was pretty good, but the turkey rollup and macaroni and teaspoon of Caesar salad, the less said about the better.  It was an infringement on the rights of men and women. Then we drove to the Astoria Tower, kind of like Cleopatra's Needle in Central Park, with historical drawings on it, and Nancy and her friend and I walked up the whole thing - around 200 winding iron stairs, like the one the murder victim died on in Murder Must Advertise.  Not the best thing for my knee, but the view was worth it, and you only live once. 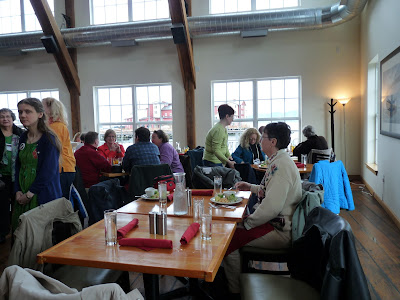 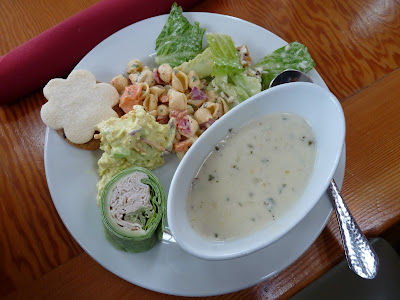 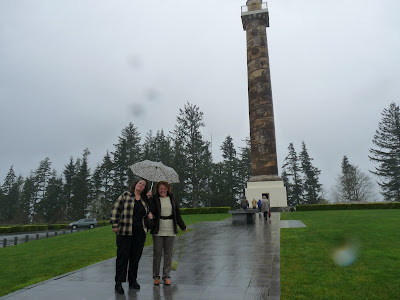 Nancy and Kristin Szilagyi  at the tower 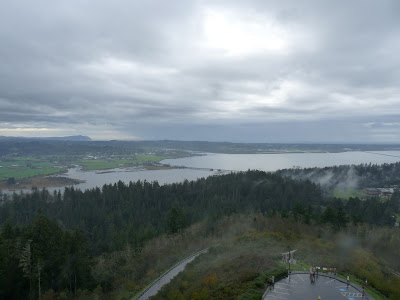 View from the tower
Next stop, the something house in Astoria.  Can't remember its name (obviously) but it was a rather dark and damp looking Victorian house.  I'd spied a local heritage museum and asked the tour guide about it, and she said it was mostly exhibits about the races and kinds of people who had lived here on the Oregon coast.  And she told me that when Oregon became a state (1859), it voted to go "free," and African Americans were allowed to live there for a period of three years.  At the end of that time, they were free, but they had to leave town immediately, or be beaten and hanged by the Ku Klux Klan!  Apparently Oregon had the biggest Klan west of the Mississippi!  Who knew?  I didn't.  So the heritage museum had a lot of Klan stuff, and no wonder they took us to the moldy Victorian place instead. 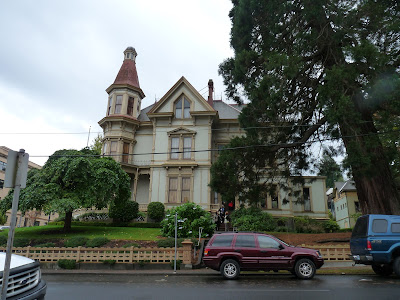 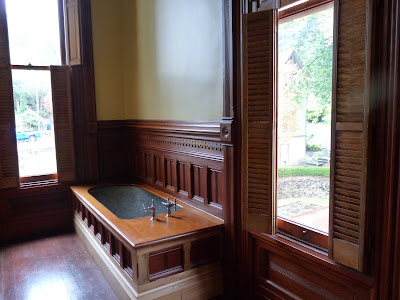 Inside Victorian House
Then the two hour drive back to the Hilton, an intense hour spent madly book shopping and schmoozing at the Emporium (Portland AGM T-shirts), dinner with Lindley, Jane and Carol at a nice Thai place down the street, and now you see me doing business as usual on the computer.

Today was the restful day.  The conference proper commences tomorrow! 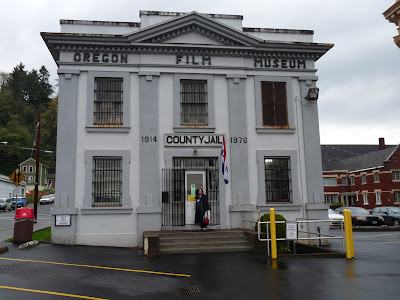 Jail and Film Society?  I didn't ask
Posted by Diana Birchall at 10:10 PM

Diana, I'm enjoying your posts from the Jane Austen conference. The building in your last photo, the Jail and Film Society, is the one used as the jail in Goonies.