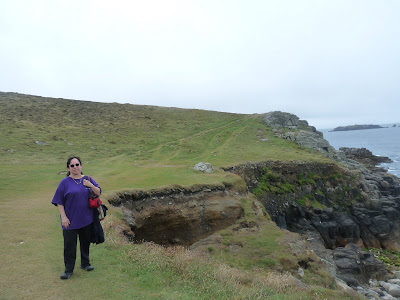 Hell Bay, Bryher
Wednesday, July 20
Another wonderful day...Bryher is producing a unique mellowing peaceful effect. It rained heavily all night and in the morning, though Jan assured me it would clear up by afternoon (which it did), so there was no reason to rush out early anywhere. After a gigantic leisurely breakfast (this time I had excellent Cornish smoked salmon and scrambled eggs, with fresh croissant, Brie and Stilton and strawberries; oh my), we relaxed in the lounge, computing and reading. It gradually grew lighter, so in the afternoon we ventured eagerly out. First we climbed Gweal Hill, and then decided to continue on the track to Hell Bay itself. So we tromped along the spectacular coastline path. A little hard for me as my knee was protesting after all the walking it did the day before; but it was exhilarating despite (or because of) occasional slight misting, and we walked far out on the Hell Bay headland. It’s often the scene of famously huge smashing waves, but was peaceful today. 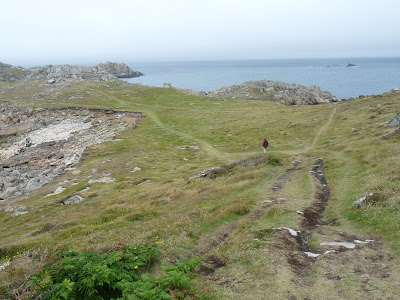 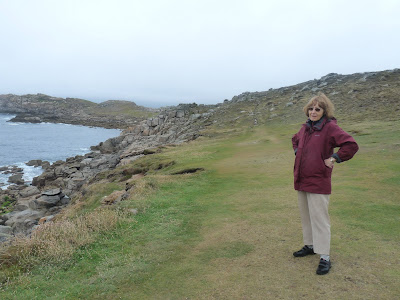 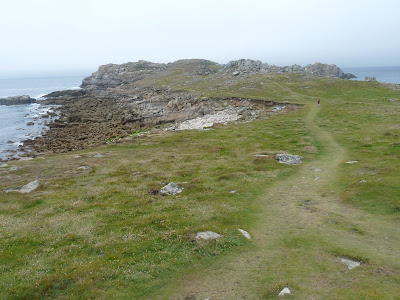 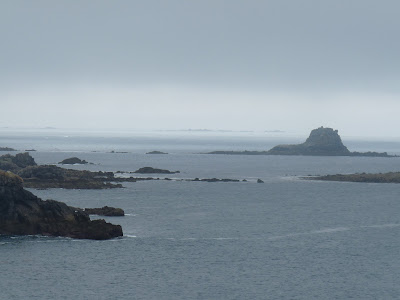 Looking out from Hell Bay
Back at the hotel the sun came out fully, lighting up the islands and sea, so after a little rest and reading I went out again, and walked all the way round the Great Pond by the hotel. Very soft gentle walking, on grass and spongy machair – absolutely beautiful.
﻿

Beach near Gweal Hill on the way back 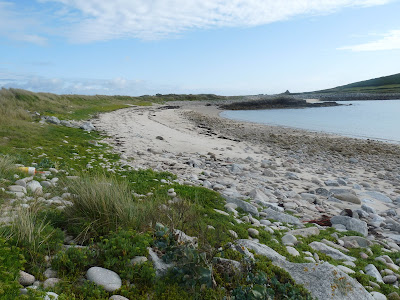 When I got back we sat in the pretty lounge and enjoyed the hors d'oeuvres provided before dinner. Dinner is always a stellar event in the lovely dining room gazing out at the idyllic view, water and islands. I had grilled mackerel for starter, then a sublime duck. Dessert was brownie, ice cream and cherries. And THEN you have tea or coffee and petits fours! Such stuffing as goes on here, but it’s made viable by the energetic walking all day, or so I tell myself. 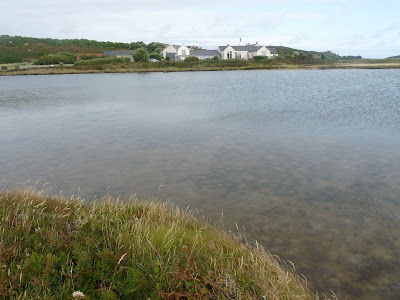 Great Pond, looking toward Hell Bay Hotel
Tomorrow we have the happy perplexity of too many places to choose among...could go to St. Agnes, a beautiful island where I’ve stayed before, with moorland and ruins; or there's a trip to an uninhabited island, Samson which I've never seen, and always wanted to visit but never managed to accomplish, as the boats don’t visit it often. Or there’s a motorboat trip around the islands to see seals and puffins, so we’re spoilt for choice! 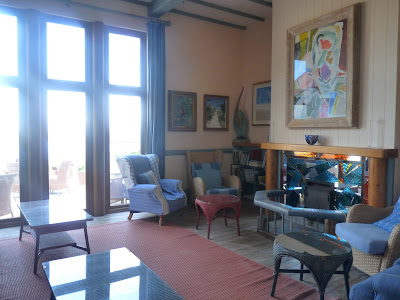 Back in the hotel lounge, which contains the art collection owned by the Darrien-Smiths 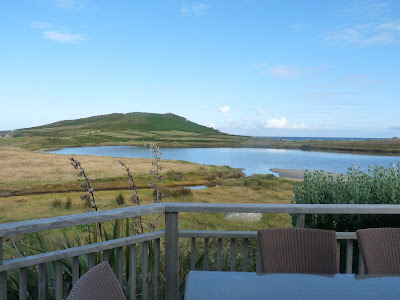 Lounge terrace facing Great Pond and Gweal Hill
﻿I spent the evening reading the writer Bryher’s memoir, The Heart to Artemis: A Writer’s Memoir, which seemed eminently suitable for a visit to Bryher itself.  Born in 1894 (died 1983), Bryher, born Annie Winifred Ellerman, took the name of her favorite island.  "As one would," said the friend who recommended the book, not realizing that I myself am named Winifred, after my grandmother!  Well, yes, I changed my name, too, to my middle name.  As one would.  Though after I wrote her biography I wished I could change back, in tribute...but it was a bit late! 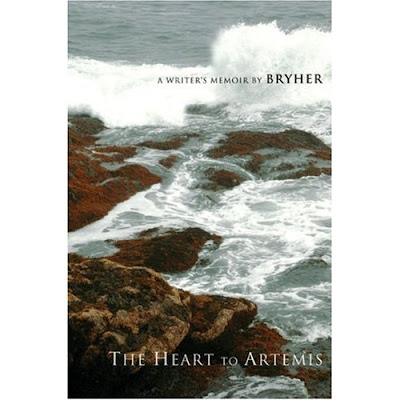 She (or he, as she preferred, but I'll stick with she) wrote in invigoratingly vital prose about her repressively Victorian upbringing, her rebellion only lifting during the family’s trips out of England, to France, Italy and Egypt, which she rapturously enjoyed.  I was completely absorbed in the narrative, until about halfway through it had a sad falling off.  Bryher, who hated her conventional upbringing with its backbone of religion and codes of behavior, found a new religion in Freudian psychiatry, and became what can only be called tiresome about it. And her account of life in bohemian circles in Paris in the 1920s ought to have been at least as evocative as the description of childhood, but it devolved into annoyingly heavy name-dropping of all the famous personages she knew (admittedly, they ranged from Joyce to Hemingway). 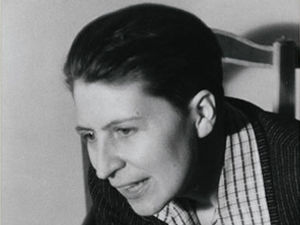 The author Bryher
I found her oddly and disappointingly disingenuous, considering the book was written in 1960 and she was supposedly a free spirit; but here is a famous lesbian who looked like Radclyffe Hall, was the lover of the poetess H.D., yet there's no insight into this important aspect of her life, nor does she mention (I had to find the information elsewhere) that the basis for her free spirit life was that she was the heiress of a shipowner father John Ellerman who, when he died, was the richest Englishman who ever lived! Not that she didn’t use her privilege well…Bryher was one of the founders of Sylvia Beach’s famous bookstore, Shakespeare and Company, financially backed many artists and filmmakers, practiced a fine poetic and historical novelist career herself, and during the war famously made her home in Switzerland a receiving station for Jews escaping the Nazis. A life well lived…but somewhat skewed autobiographical writing, especially marred by the worship of Freudian analysis. Most disappointing of all from my viewpoint is that even though she took the name of her favorite Scilly island, she hardly ever mentions the place. Still, it was an interesting choice for island reading, and I had an eerie feeling, sitting in the Hell Bay lounge, occasionally looking up at the scenes the author must have loved a century ago, that I was almost certainly not the first person to read Bryher on Bryher. 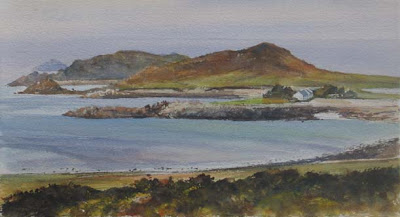 Gweal Hill and Gweal from Samson Hill, Bryher
Painting by David Rust, at the Tresco Gallery 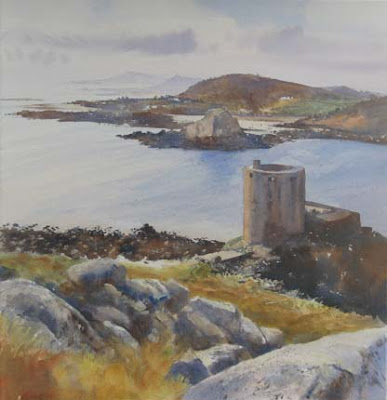 Cromwell's Castle to Hangman Island and on past Bryher
Painting by David Rust, at the Tresco Gallery
Posted by Diana Birchall at 1:08 PM

The pictures are really lovely and you seem to be walking and eating your way through time :) On Bryher's evasiveness, alas, it's common. Carolyn Heilbrun goes on and on about how we have to tell the truth about our lives so as to start fruitful conversations which can transform ourselves and then produces this utterly pollyanna account of herself. Ellen