Chawton Then and Now 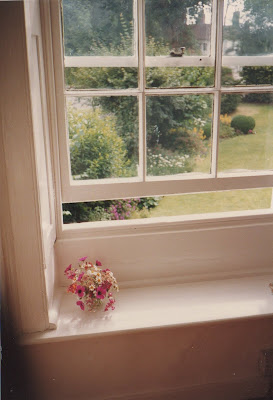 Flowers at Chawton, 1985
﻿It was as long ago as 1984 that I first attempted to write in imitation of Jane Austen's "voice" (which I hasten to fervently and categorically state is not a possible thing to do), and in that first attempt, won a writing contest in Persuasions, the journal of JASNA (the Jane Austen Society of North America). I channeled Miss Bates, and though I wince at a youthful effort, I'll attach it at the end.
﻿ 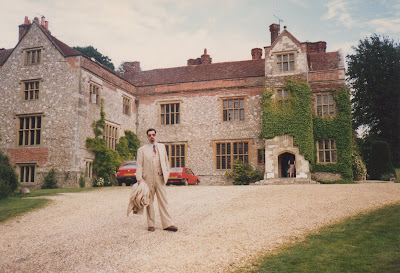 Husband Peter at Chawton Great House, long before it became the Chawton House Library
Faulty and feeble though the effort might have been, I was encouraged by its success, and it was the beginning of my attempts in that direction, which culminated in my writing full blown Jane Austen sequels, Mrs. Darcy's Dilemma and Mrs. Elton in America. The following year, 1985, was not the first time I attended the annual general meeting of the English Jane Austen Society at Chawton, but it was the first time I took pictures. 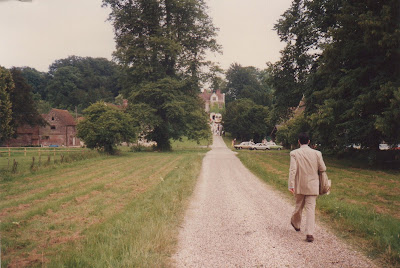 Peter walking toward the Great House...much quieter place then!
﻿
At that time, I believe Lord David Cecil was still Hon. Chairman, and Tony Trollope and the Countess of Huntington were much in evidence; it was very much the old guard. These long-ago meetings were perhaps the most quintessentially English occasions I'd ever intruded upon; my husband and I were, I believe, the only Americans present, and it was a smaller and more low key affair than the meetings are today. 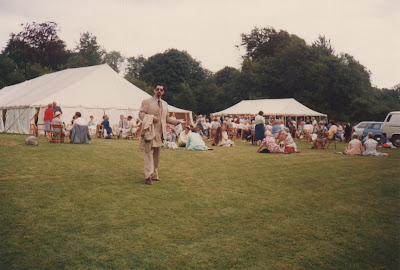 The tents, as they were then.  Smaller. 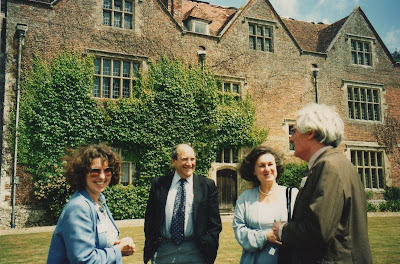 Maggie Lane, Lyndall Gordan and her husband, and Brian Southam, 1985
This was many years before Sandy Lerner conceived of turning the "great house" into Chawton House Library, and the whole place, achingly lovely, was in a state of summery sleepiness and old world ways. I remember the Countess introducing Lord David Cecil, and using an upper class old world trill, she intoned, "Will the Chairman please r-r-r-ise." Fortunately I still have some pictures from that day, and will share them here. And, having just returned from the 2011 meeting with more pictures, I invite you to contrast and compare the difference between Chawton meetings, a quarter century apart. 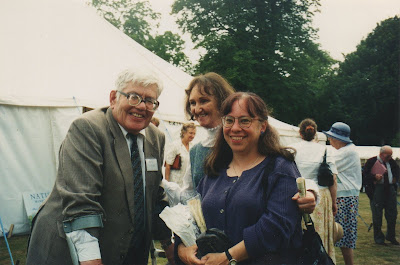 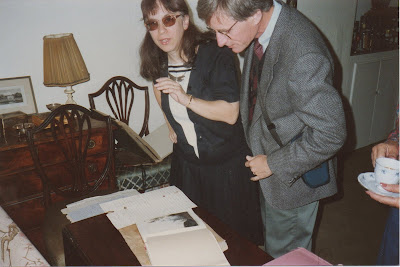 Later, Professor Ed Copeland and I examine the famous painting of Jane Austen with her back turned, done by Cassandra.  It was at that time kept in a drawer in Alwyn's house!  Nowadays it's under lock and key in a museum, you may be sure! 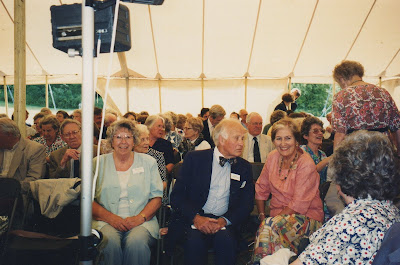 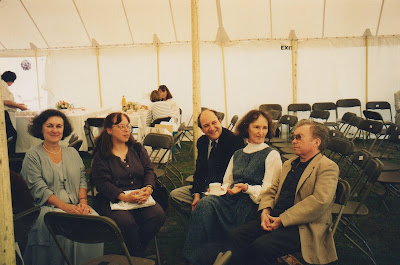 Lyndall Gordon, myself, her husband Siamon Gordon, Gaye King, and David Nokes
And now, some more up-to-date pictures.  Below, members of our panel at the 2009 Chawton House Library conference, "New Directions of Jane Austen Studies." 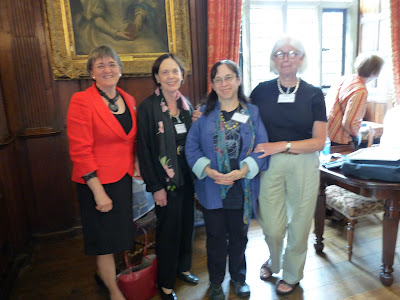 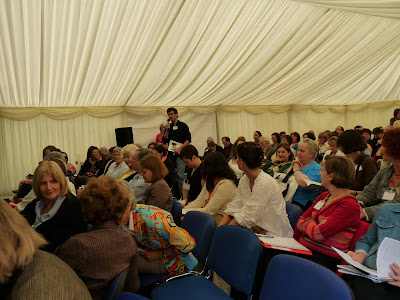 A larger tent, more people...and they do seem younger.  Many more Americans, too. 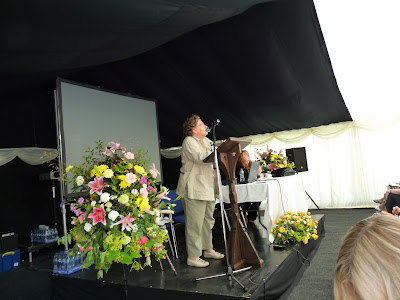 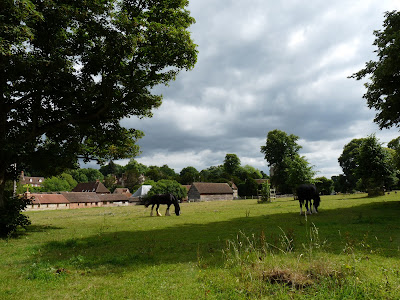 And now up to days present, here I am at the Chawton meeting once more, in July 2011, in the lovely, mature garden. 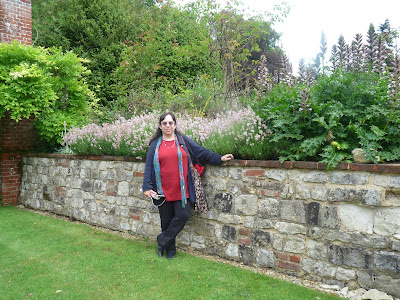 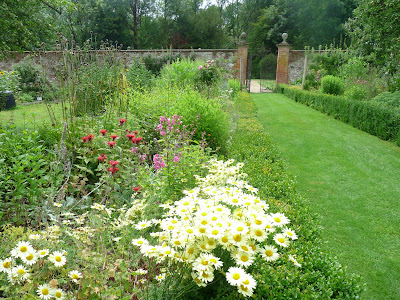 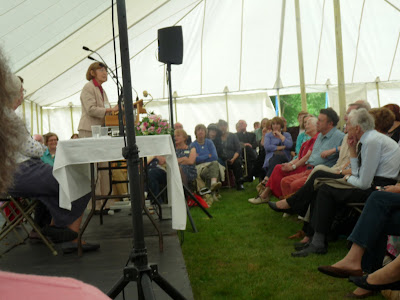 Professor Janet Todd delivers the address on the reality of Mr. Darcy, to a larger audience in a bigger tent 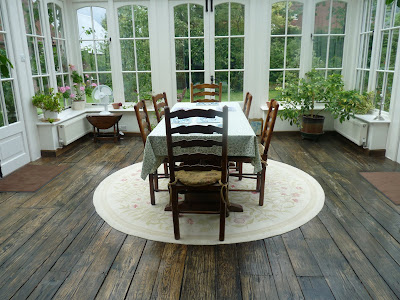 Interior of the remodeled stable block 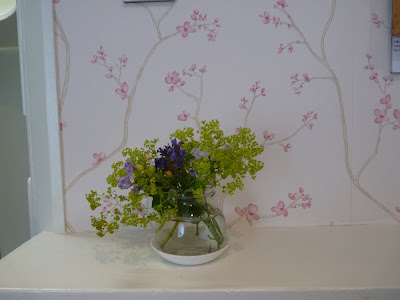 Nosegay at Chawton Cottage in 2009:  always a tradition
And now, my first essay in Austen-sequelizing!  From Persuasions, 1984. 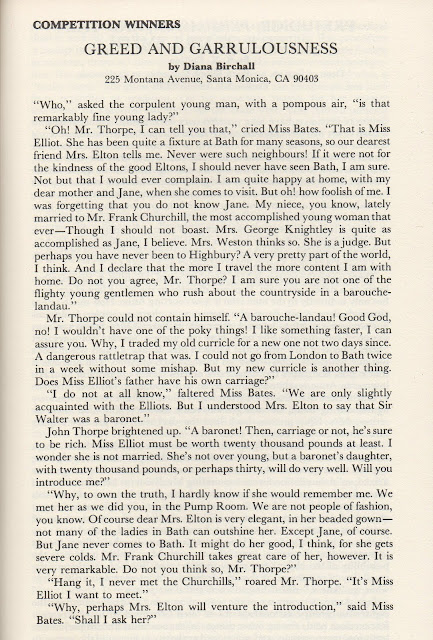 A lovely trip down memory lane for you, Diana. How many of these Chawton conferences have you attended over the years? Barbara

Lost track, Barbara. Five or six, I think, in a quarter of a century.

If there is an ideal male costume for the JAS meetings, it is the pale linen suit. All Peter needed was a panama hat!
Ron

Thank you, Diana, I love these peeks into your wonderful journeys!
And your essay was delicious!!

"Oh! this is beautiful indeed! this is the very thing!" Thank you! You brought back satisfying memories for me of several quiet visits in the 80s and 90s, when everything associated with JA was truly light, bright & sparkling. My last views of the garden were the week of 9/11 and I have not been back to England since. It is good to be able to think about it the way it was and the positive effect it continues to have on my life. "The comfort of it in her hours of leisure was extreme."

Linda, I can see you feel as I do about the charm of the Jane Austen world in the "good old days." I'm not sure if memory gilds things
("How wonderful, how very wonderful the operations of time, and the changes of the human mind!”), or if the Jane Austen world really was more wonderful in the days before the glut of films and zombies...but I know what I think!

This is simply fabulous, Diana. I love the before and after shots, and seeing the famous faces that crop up in the Jane Austen world.

I was researching David Nokes, because I am reading his Jane Austen book, which is excellent, I think. Anyway, I was looking at a few photos of him on the web, and whee there was my friend, Diana. You sure get around. I was sad to see that he died in 2009, so there will be no more books. I just need to find his "Raillery and Rage: Study of Eighteenth Century Satire" now to complete my collection of his works.