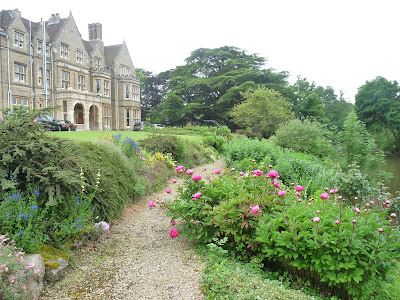 
Tuesday June 18. Intensely busy day. Said farewell to Bath, and Jane Odiwe, took taxi to station rather than haul heavy suitcase, and boarded a train which changed at Didcot, but there my difficulties ended: my friend Jean met me at Oxford station. We went directly to The Grand Cafe, which advertises itself as the oldest coffeehouse in England, est. 1650, but looks vaguely Italian; and there I delighted in one of the best Victoria sponge cakes I ever ate, and tea. 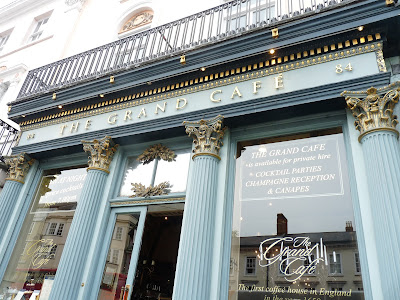 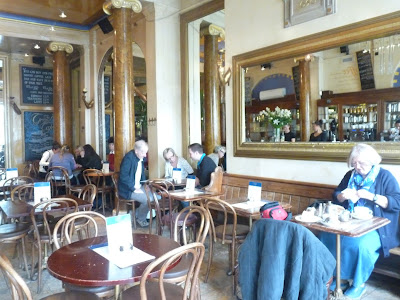 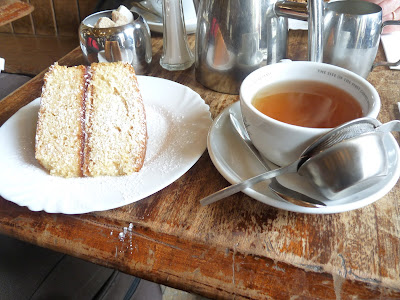 Then we walked down to St.Hilda's College, to lunch with Jean's friends "in college," very handsomely on pasta and cold ham and cheeses. These were all St Hilda's fellows and media members, who were about to have a meeting; when they began their business I went off on my own for a walk, leaving my suitcase at the porter's office. 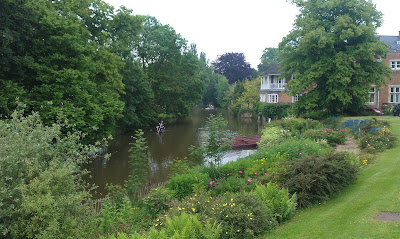 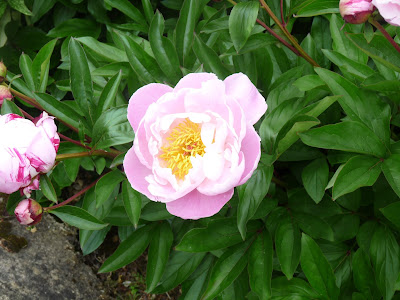 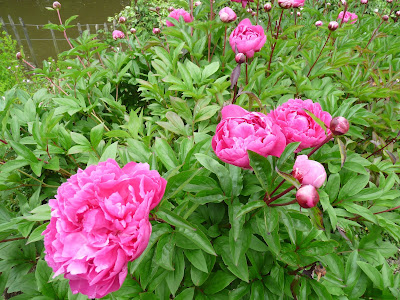 First I happily inspected a charming but expensive antiques shop (where I bought nothing but a few cat post cards from the 1930s), and then visited the Ashmolean, to refresh myself with an exhibit of old master drawings - Michelangelo, Raphael, Turner, up to more modern ones.  I particularly liked a self-portrait of William Palmer, which has led to my liking of him in general - what a pity his son burned so many of his works!  The Guardian shows many of the drawings in this exhibition, here:
http://www.guardian.co.uk/culture/gallery/2013/may/24/old-masters-ashmolean-museum-in-pictures#/?picture=409452754&index=0 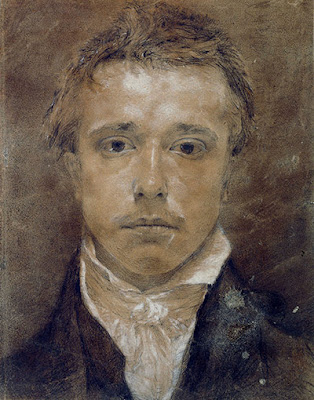 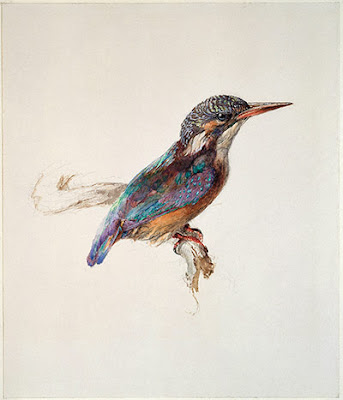 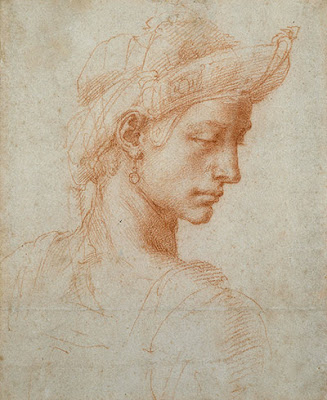 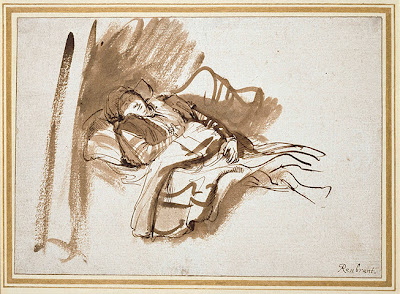 Rembrandt's wife Saskia, dying, probably of plague
After enjoying the exhibition, I ordered a cab at the Randolph across the street to go to the home of Allison (a journalist), where the talk was to be. I was quite amazed by the array of wonderful people who came: more accomplished and delightful intellectuals in a room than I might meet over the course of several years in Los Angeles (sorry, but it's true!). A famous publisher, the production designer for Dr. Who, a range of most interesting writers, including best-selling friend Elizabeth Aston. What would bring this knowledgeable, sophisticated group out to see me? Well - my talk was entitled, "A Life in the Story Department: Forty Years Reading My Way Through Hollywood." If anything interests writers and publishers, it's selling books to Hollywood! 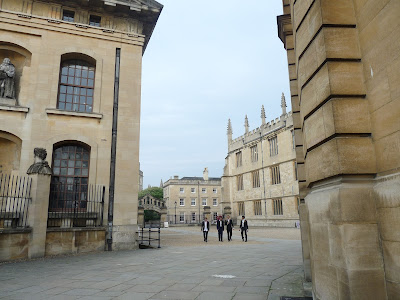 Golden youth of Oxford
The talk went nicely, it was only hard, afterwards, to keep up any level of witty conversation during dinner (most delicious risotto...and an interesting exposure to Oxford dinner-table talk) while being assailed with waves of belated and rather severe jet lag! Never mind, it was very enjoyable. Lizzy kindly drove us and my suitcase home to Jean's house on Cumnor Hill and I plunged into much-needed sleep. 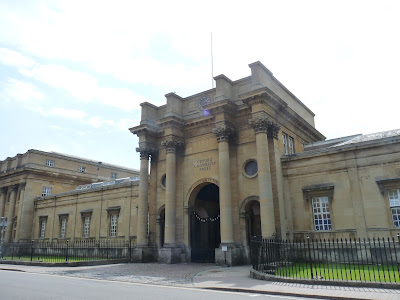 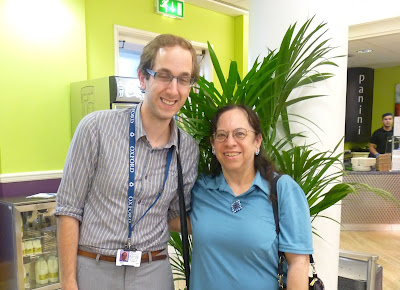 Wednesday was a bit more relaxing!  I was excited to meet Simon of the Stuck-in-a-Book blog ( http://stuck-in-a-book.blogspot.com/ ) at the Oxford University Press, where he has been working as editor of the Oxford Words blog (for which I was honored to write a piece
http://blog.oxforddictionaries.com/2013/06/dorothy-l-sayers/ ).  We had a lovely lunch in the OUP's canteen, and I devoured delicious Scotch egg and smoked mackerel, and Simon his usual vegetarian choices, while covering a range of subjects with great dispatch and (at least in my case) delight!

After lunch it turned warm, went to muggy 76F (it will get cooler and showery tomorrow), and I strolled back from Oxford University Press to the Bodleian where I saw a rather nice small exhibit called Magical Manuscripts - ancient tomes and manuscripts and how they influenced Tolkein, Lewis and Pullman. Some quotes:  "When in doubt, go to the library."   "Libraries are the half enchanted repositories of the strange and indecipherable scripts written in unfamiliar formats with which fantasy literature abounds."  There was the Ashburnham burnt fragment, an 11th century Anglo Saxon life of St. Basil that survived the great fire of Ashburnham House  of 1731. A heroic librarian, Dr. Bentley, escaped the blaze through a broken window clutching the Codex Alexandrinus. 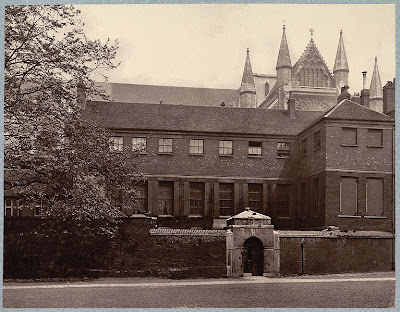 Ashburnham House, 1880
There was also the Mirroir du Monde, a 1463 chronicle of world history up to Christ, which had a merman monster, quite hideous with big breasts. What I liked best though was an unpublished Lewis manuscript about Digory and his kindly godmother Mrs. Lefay, and how he lost the ability to talk to animals and trees. The squirrel Pattertwig is in it. Digory says he is ill and Pettertwig offers him a nut, even though it's a cold winter - "what kind of squirrel would you take me for if I didn't have enough of a pile to spare a friend a nut?" And Digory turned away as it is very bad form to look to see where a squirrel's store is. 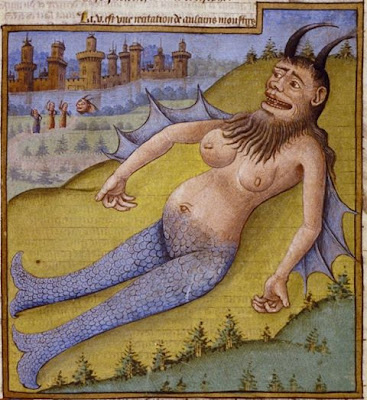 After that I sat at the cafe at Blackwells where I could use my iPad, and Jean met me there. Chatted about the writing life till they threw us out, then had an elderberry sparkler at the Quod, a lovely restaurant garden. Then since Lizzy thought the riverside pub the Trout's food has gone downhill we took a cab to another riverside pub, The Punter, formerly the Waterman's Arms.  Lizzy's children, Anselm, science fiction author and editor, and Eloise, classics scholar going into neuroscience, came. They love cats and are altogether charming, talented, and very knowledgeable about publishing, so conversation was lively!  And the food was superb, as Lizzy had intimated. English venison, potatoes dauphinoise, beet compote, fresh press local apple juice, and crumble.  We looked out at the narrow bending river as the summer twilight set in about 10 pm, with relaxed, pleased with themselves Oxonians chattering on the grass. Lizzy drove us home again and I visited with Jean's lovely husband Tony who sadly missed dinner because of a town council meeting. He kindly helped me with maps for tomorrow though he gets up at 5 AM to go to London. Now I'm going to sleep - Cambridge tomorrow. My suitcase is lamentably getting heavier as I keep acquiring books... 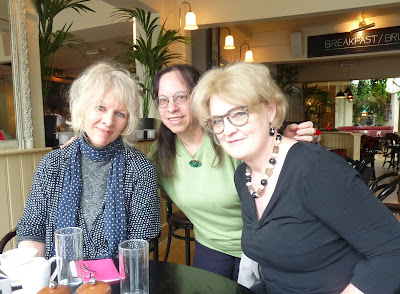 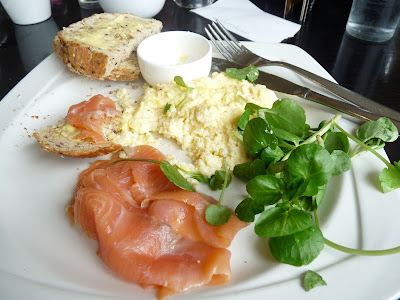 In the morning, Jean and I bundled up my cumbrous load and took a taxi into town where we met Lizzy and author Rosie Orr at Brown's.  We talked writing and publishing and I ate English free range scrambled eggs with heavenly smoked salmon and brown bread and butter. Then they took me to the bus stop, and waved me goodbye.  Very sorry indeed to leave this sociable clever and very nice set.  As Anne thought in Persuasion
when she met Captain Wentworth's friends, "These would have been all my friends," was her thought; and she had to struggle against a great tendency to lowness. 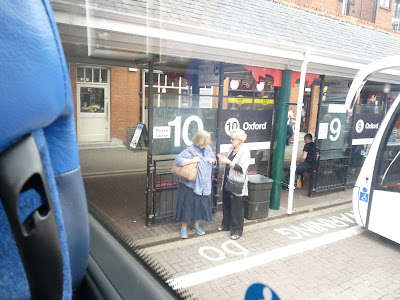 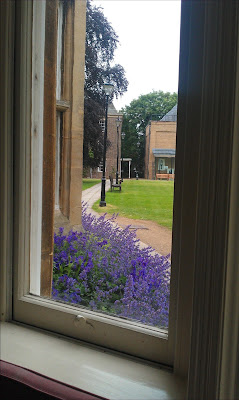 Posted by Diana Birchall at 4:49 AM

Diana, I am reading these avidly. I love your eye for a good flower and a delicious meal and your enthusiasm for all things English and rejoicing in every experience that comes your way from dinner in an Oxford college to a good breakfast. As a nation, we tend to run ourselves down and writers on England-as-a-whole often concentrate on the hard-pressed and overcrowded nature of the island. I love how you've celebrated the gracious and good things you've encountered. Your writing reminds me of Rupert Brooke's lines from Granchester: 'Say is there beauty yet to find?/ and certainty, and quiet kind?/deep meadows yet, for to forget /the lies, the truths, the pain'. Next year, I hope you might find some time for a visit to a quiet Suffolk village, full of flowers at this time of year and with some perfect riverside pubs nearby

I too love reading your experiences of good times in the UK, Diana, and feel very uplifted by your responses to everything and everyone. The Ashmolean drawings are simply superb. I'd say, come to Yorkshire next year, but who knows whether I'll be there or not ... as you know I'm away this year. Barbara

I see it as a brave trip too. Ellen

This entry was entertaining. I liked seeing a repulsive ancient image of a "merman" (reminds me of a scene in Zoolander)and you are right that the Grand Cafe looks Italian/Roman (and is certainly grander than the cafes of LA).

Your food descriptions make me hungry so now I must eat.

Ah, Tig, it is a stout old would-be English heart that is beating in this corner of California, and I will never cease celebrating England! I definitely will factor in a Suffolk village next time, having felt so badly about missing it, and you. You know how much planning it takes to make these trips operate smoothly. And you have forestalled my Grantchester visit, watch this space!

Thank you, Barbara - we'll have to make our travel schedules overlap next year! Can't wait to read all about "Swisserland," as Jane Austen calls it; I'm still digging my way out after my trip.

What a wonderful trip, Diana! On one hand, I'm jealous. On the other, I know I never would have been able to hold up my end with the historians and intellectuals you met along the way.

Thanks for sharing, and I loved all the pictures... well, almost all of them. The painting of the merman kind of gave me the creeps. ;)

Thanks, Shannon! The historians are the best part, they have the most interesting things to say about the food! I hope you get a trip soon.


Another poem your blogs remind me of, Diana, is The White Cliffs by Alice Duer Miller. I don't know if it's known in America. It's the verse narrative of a young American women coming to England and marrying into an English family. It was published in the early years of the Second World War. My grandmother gave me her copy a few years ago, with the comment that of course it was very sentimental stuff and not real poetry but they found it very comforting reading at the time. Apparently it inspired the song 'There'll be Bluebirds Over the White Cliffs of Dover'

I have loved England, dearly and deeply,
Since that first morning, shining and pure,
The white cliffs of Dover I saw rising steeply
Out of the sea that once made her secure.
I had no thought then of husband or lover,
I was a traveller, the guest of a week;
Yet when they pointed 'the white cliffs of Dover',
Startled I found there were tears on my cheek.
I have loved England, and still as a stranger,
Here is my home and I still am alone.
Now in her hour of trial and danger,
Only the English are really her own.

II
It happened the first evening I was there.
Some one was giving a ball in Belgrave Square.
At Belgrave Square, that most Victorian spot.—
Lives there a novel-reader who has not
At some time wept for those delightful girls,
Daughters of dukes, prime ministers and earls,
In bonnets, berthas, bustles, buttoned basques,
Hiding behind their pure Victorian masks
Hearts just as hot - hotter perhaps than those
Whose owners now abandon hats and hose?

Thanks for that, Tig - I am awash! Love it. But I must tell you I have a personal interest, too. Because far from being unknown in America Alice Duer Miller and my grandmother knew each other - they both sat at the same table at Mark Twain's 70th birthday dinner, which was attended by literary figures, and was written up in Harper's Magazine! There are even pictures of each table, and one of the table with Winnie and Alice. I've written about it on this very blog, and if you'll search for the entry of May 30, 2010, you'll see it. Quite fascinating, if I say so myself! This is the link:

I'll send this to you too, as I know it's not easy to use the comments section on my blog. Winnie I believe felt about England as both Alice Duer Miller and I do, but was never able to visit it.