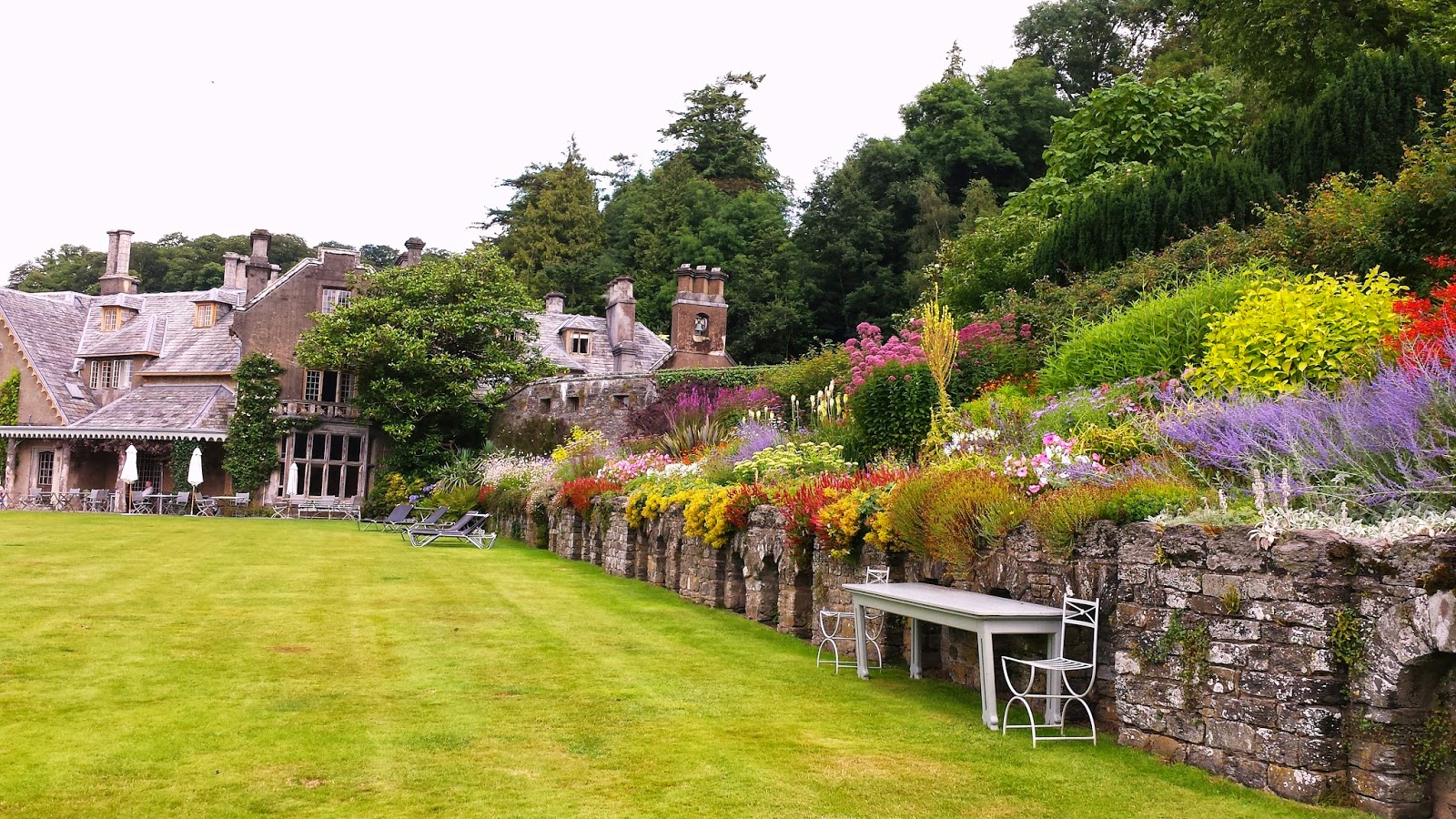 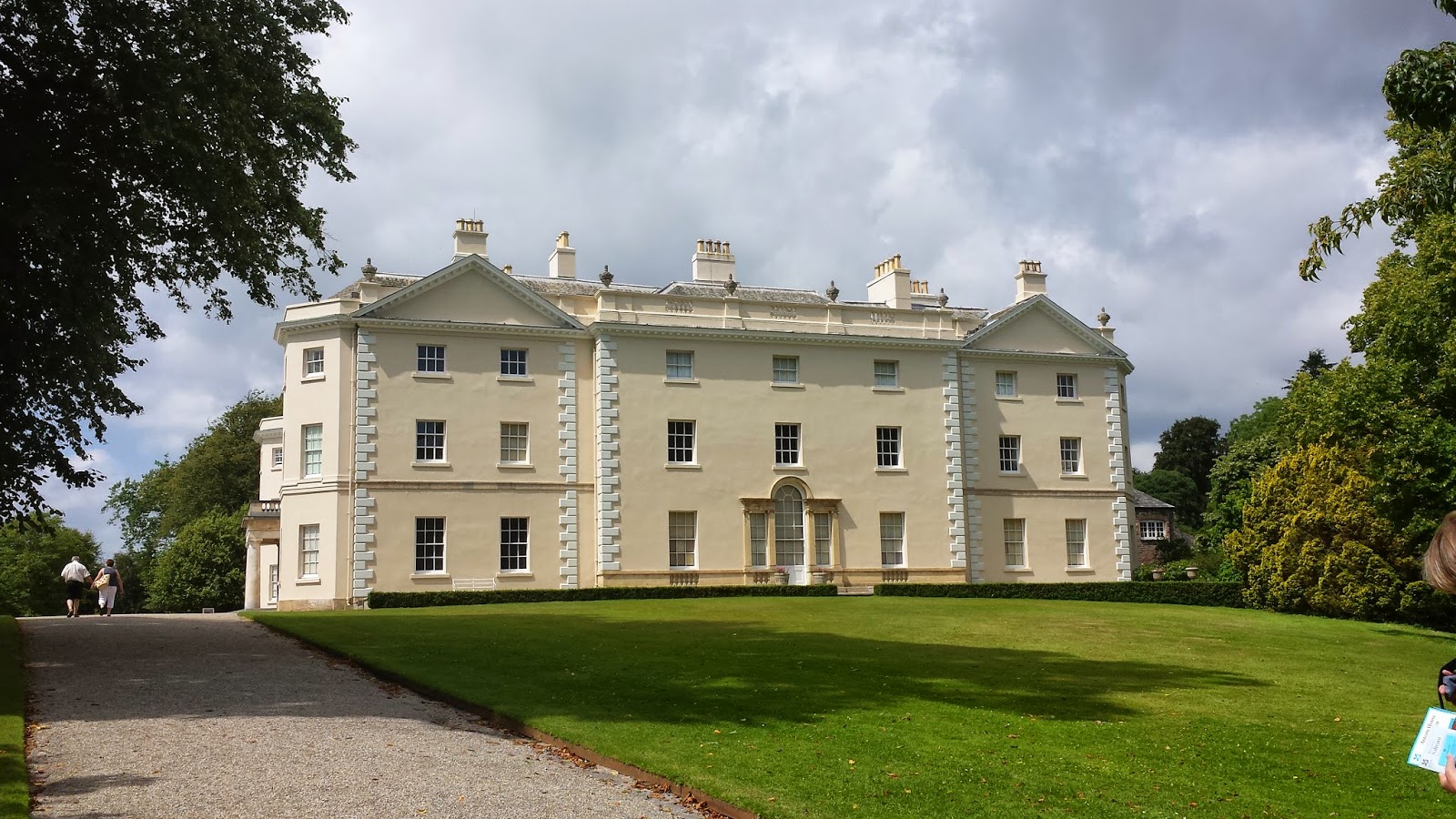 Saltram House
Woke today at 6:30, hearing the cows moo and saw Rosie's son purposefully striding about the farm buildings. I was then able to use his room for internet, and also had a lovely morning walk round the pretty garden, photographing flowers. Then breakfast, at which I was joined by the other guests, not the most congenial - an elderly couple who bragged and showed pictures of the country house in Kent where they used to work, and a lady who worked for a Greek shipping magnate in hopes he'd take her to Greece but it was only New York, which she HATED, she said with emphasis. Told stories of Sammy Davis Jr's bodyguards being afraid of kidnappings (?) and how she was forbidden to wear a bikini on a Long Island beach (this was 1967) and what a TERRIBLE place America was and how she'd never go back for anything. Since she hadn't seen the place in nearly 40 years and was addressing all this to an American, it was kind of peculiar, but didn't keep me from enjoying my bacon sausage egg tomato and thick brown toast with butter and honey. 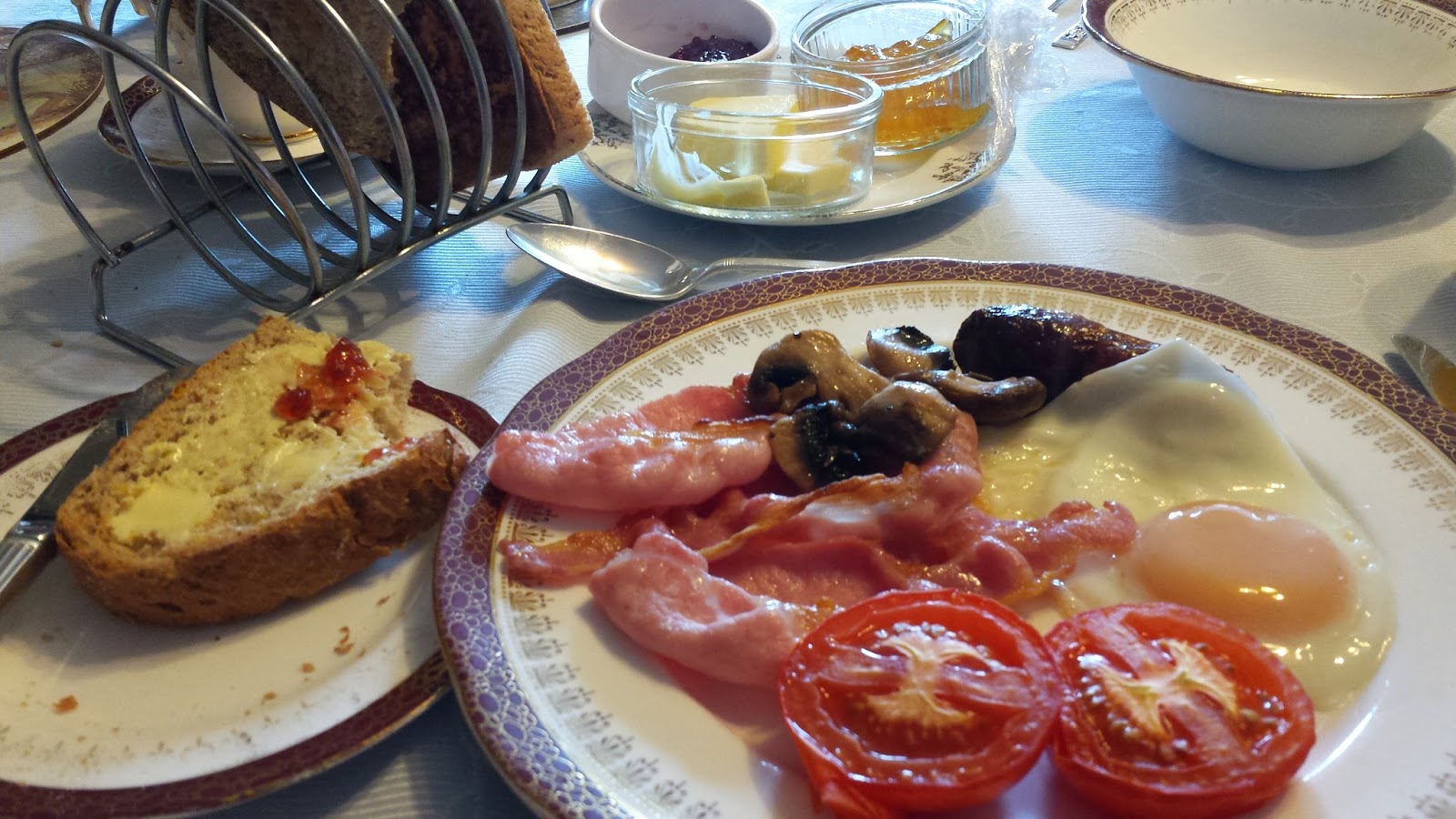 A Devon country breakfast
Lynne picked me up at 10 am. Glorious sunny day, fresh feeling after last night's rain. We drove to Endsleigh House in Milton Abbot, which is now a luxury hotel, but with grounds perhaps not that much changed since the Duchess of Bedford, who had an affair with Landseer, met him for trysts there. Lynne told me all about it and I got the book, Mistress of the Arts, by Rachel Trethewey, which looks fascinating and will resonate much more now that I've seen the setting.  Endsleigh, built in 1811 as the sixth Duke's hunting lodge, is a place of truly swooning beauty, with gardens designed by Humphry Repton, and there's a deep and beautiful arboretum full of rare trees, where Lynne often enjoys walks - how enchanting! 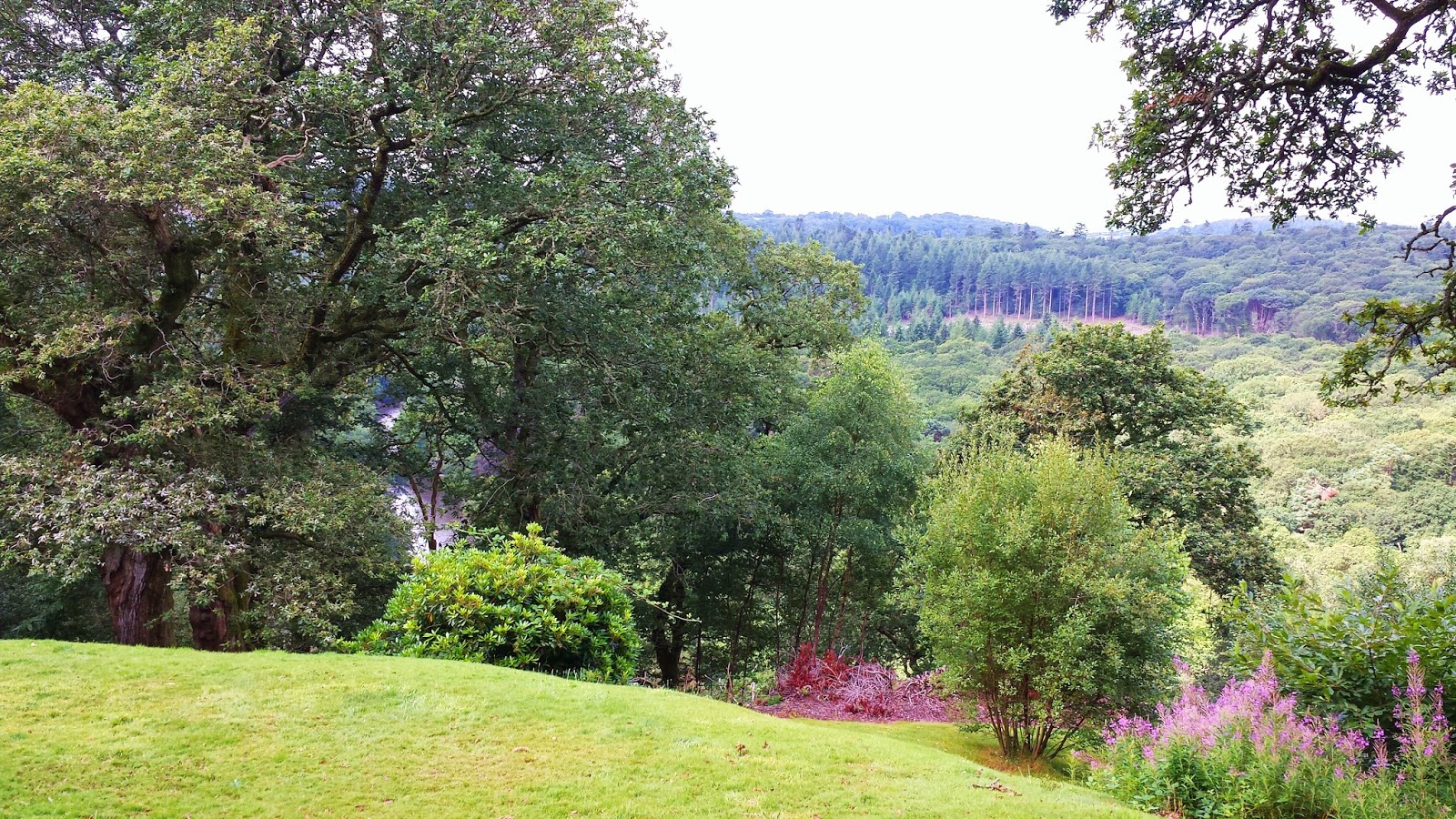 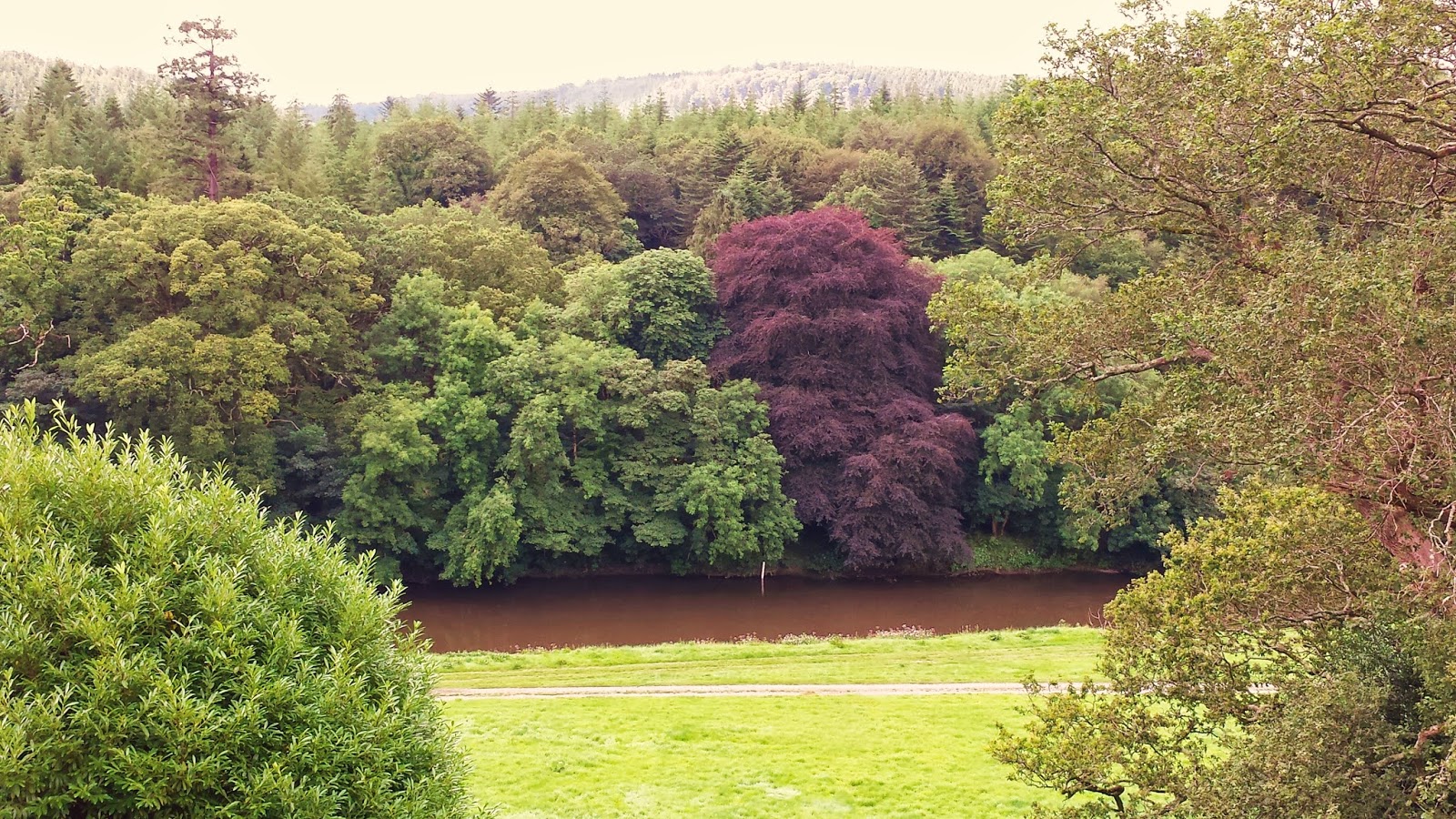 Overlooking the Tamar
Her reading group also has its meetings at Endsleigh in a room with 18th century Chinoiserie wallpaper and flowery green views out into the gardens. (Bit of a contrast to my reading group's digs!) 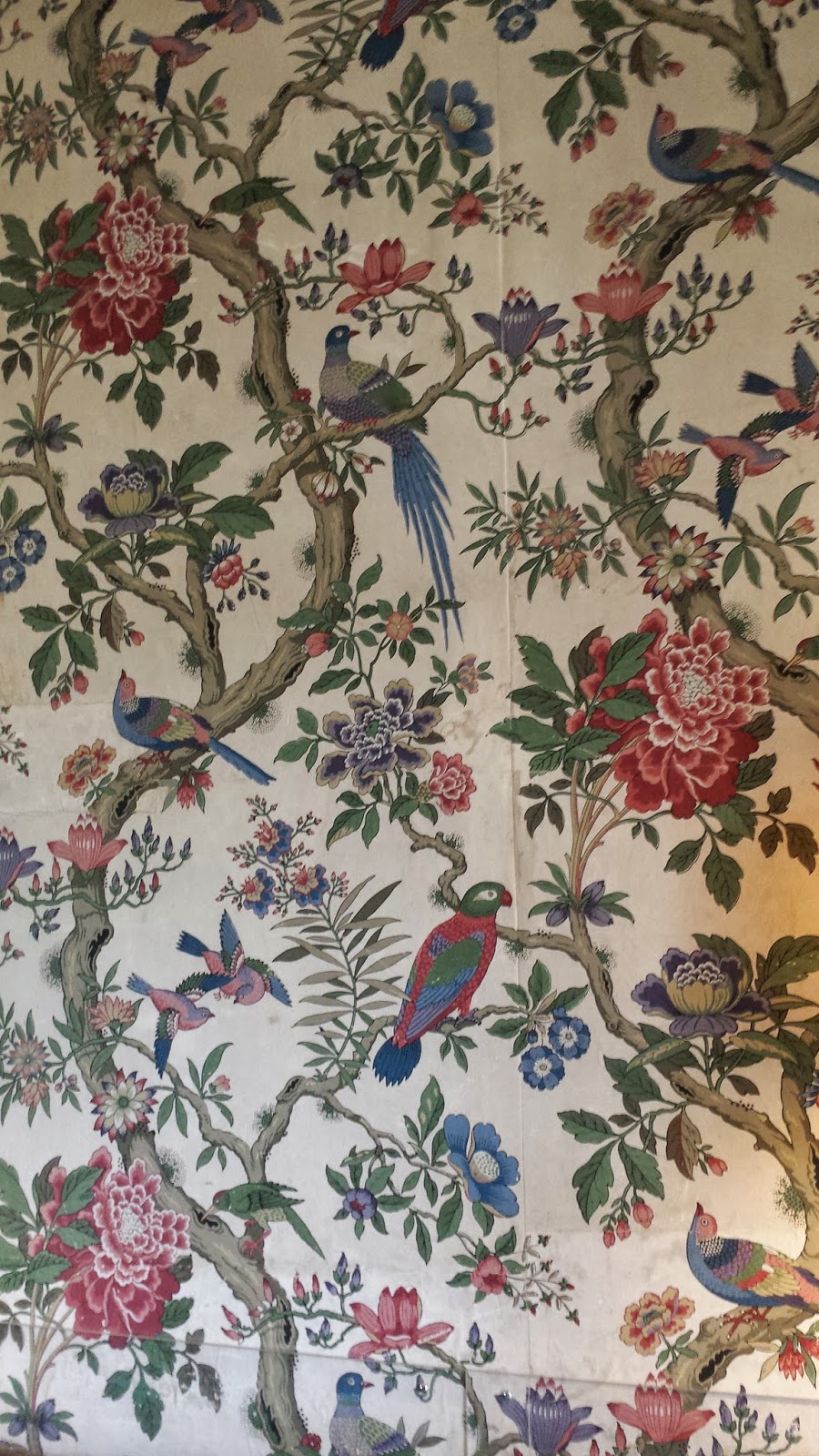 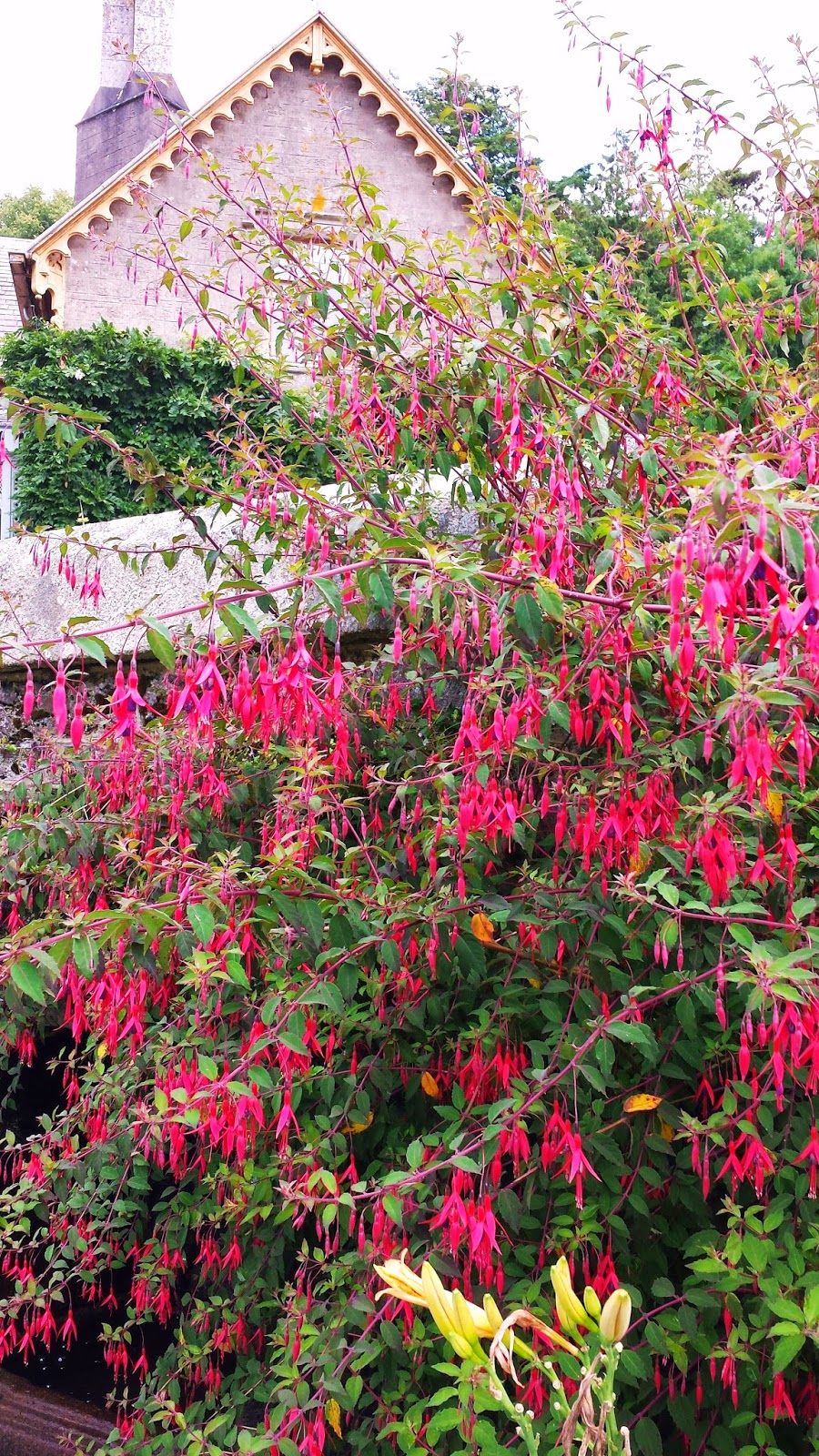 Fuchsia at Endsleigh
There are grottoes and a little 18th century shell folly but really it is the flowers that are the star - my word, the gardening there is English high art at its most transporting! Especially ravishing was all the buddlia covered with masses of butterflies, some rare ones.  After wandering through these amazing gardens, we sat peacefully gazing out at them and I drank my newly discovered favorite drink, Luscombe apple cider - sheer nectar! It was the Devonshire summer moment, to perfection. 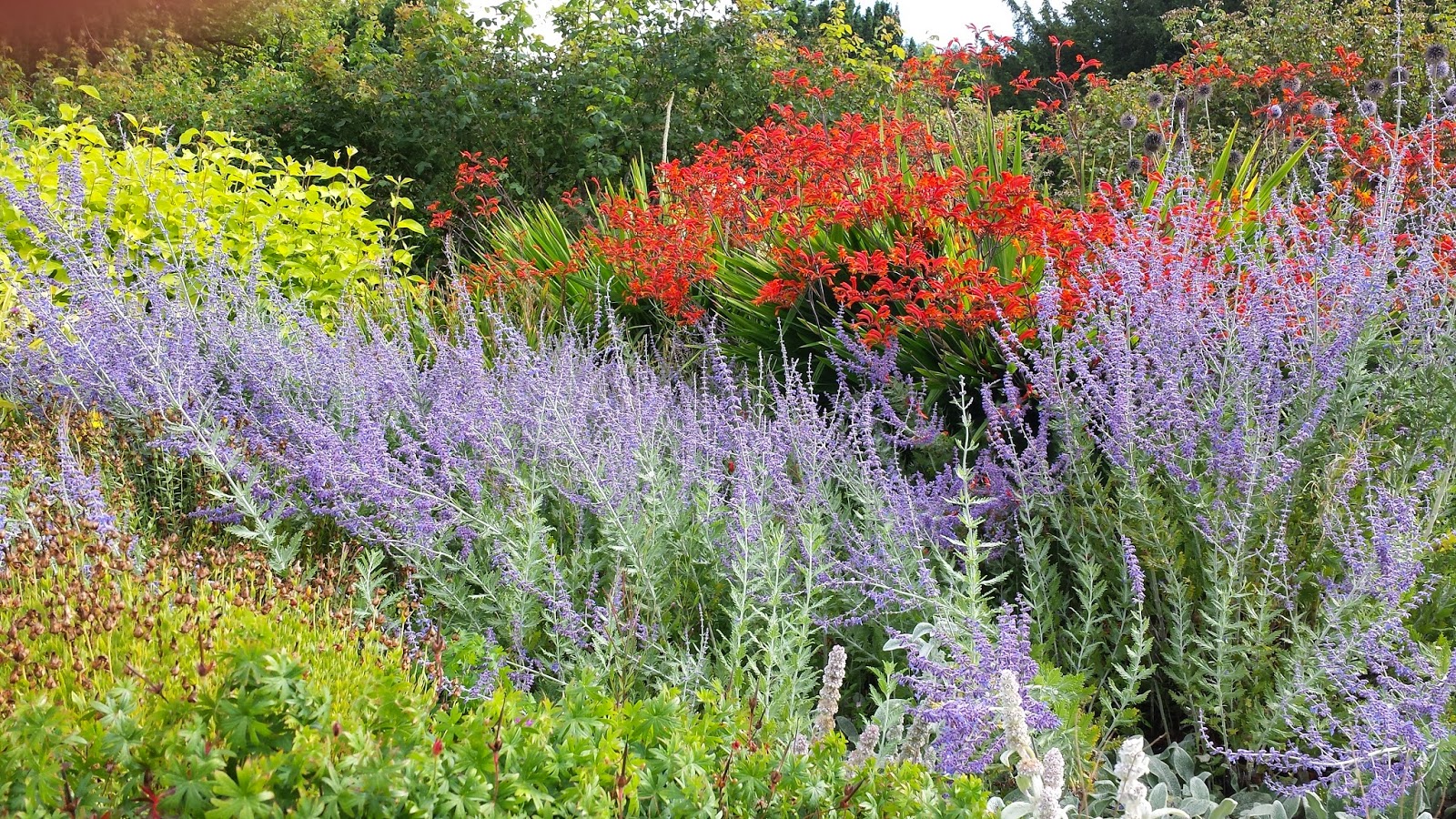 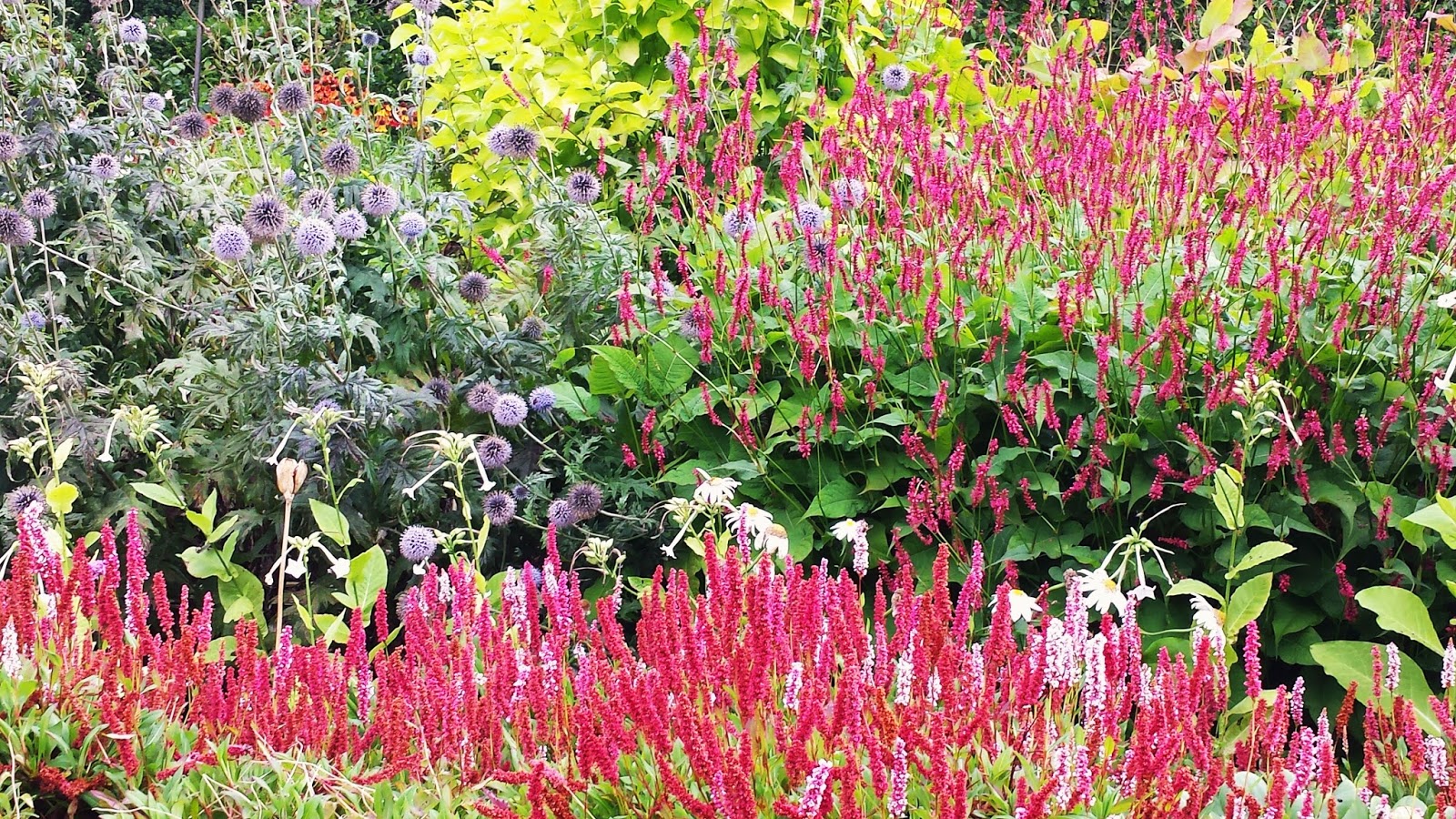 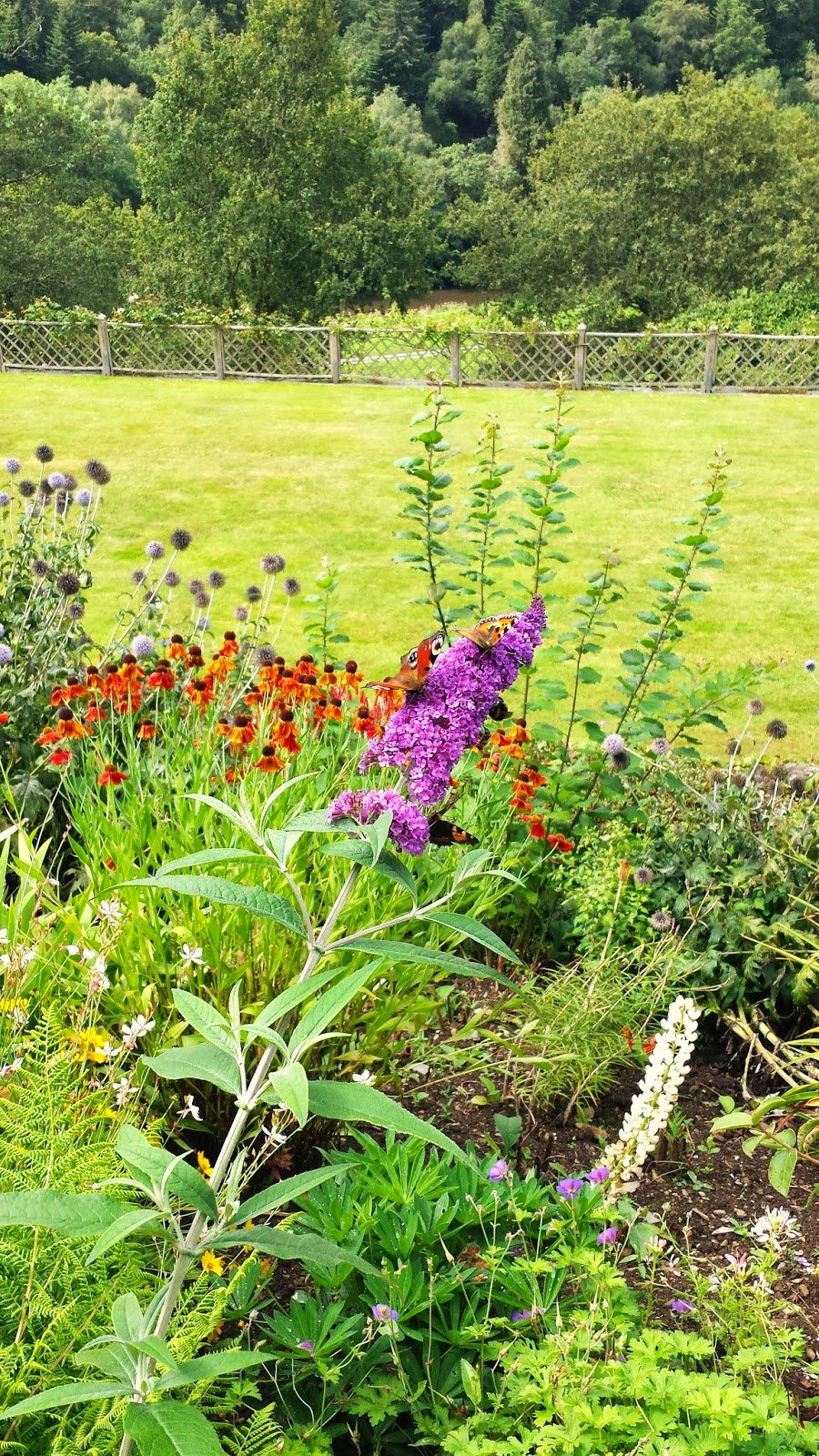 Butterflies on the buddlia 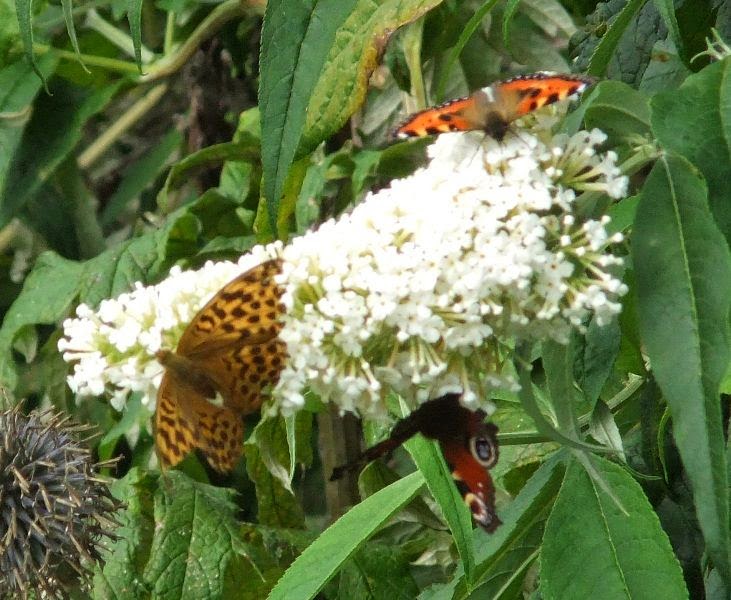 An English butterfly summer.  Picture borrowed from Lynne:  three species on one flower! She thinks it's a Silver Washed Fritillary on the left, Tortoiseshell above, Peacock below. 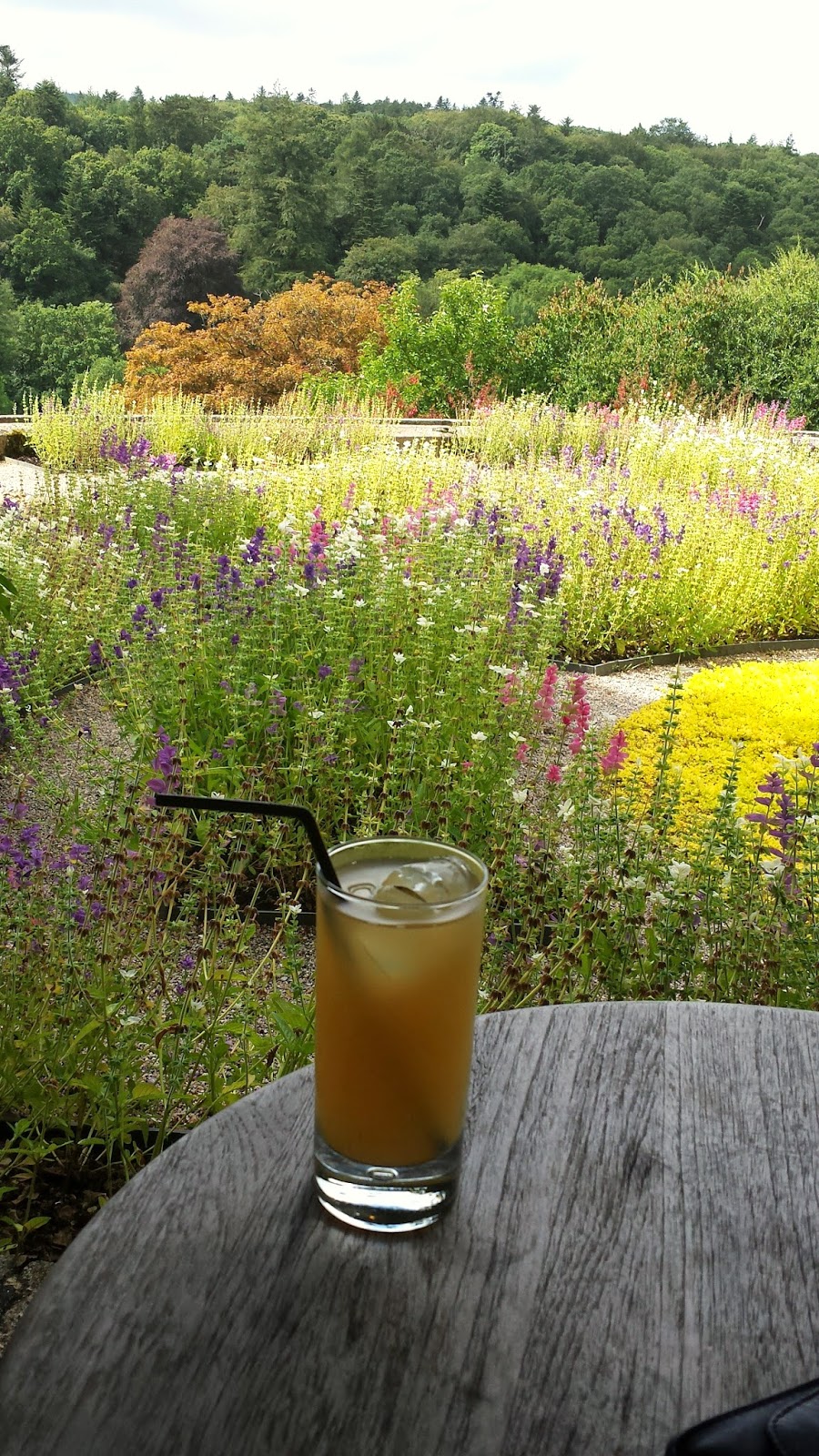 Luscombe apple cider and a perfect view
From there we drove through the lovely town of Milton Abbot and then to Plymouth. Heavily bombed in the war, there's not much left in Plymouth reminiscent of Jane Austen's day, but I think the light must have been the same. Its special quality of white, by-the-sea airiness must have enveloped Austen when she visited, as she likely did, as she sent characters in both Persuasion and Sense & Sensibility there. Our second beautiful country house of the day was Saltram House, home of the Countess of Morley who was Jane Austen's correspondent and admirer. Designed by Robert Adam, Saltram has most beautiful interiors, especially a saloon the first sight of which is staggering, with its gorgeous plasterwork ceiling. It's said to be one of the best preserved early Georgian houses in the country, and is a fascinating place, rich with Reynolds portraits (as he was a friend of the family) as well as works by Angelica Kaufman and Gilbert Stuart. 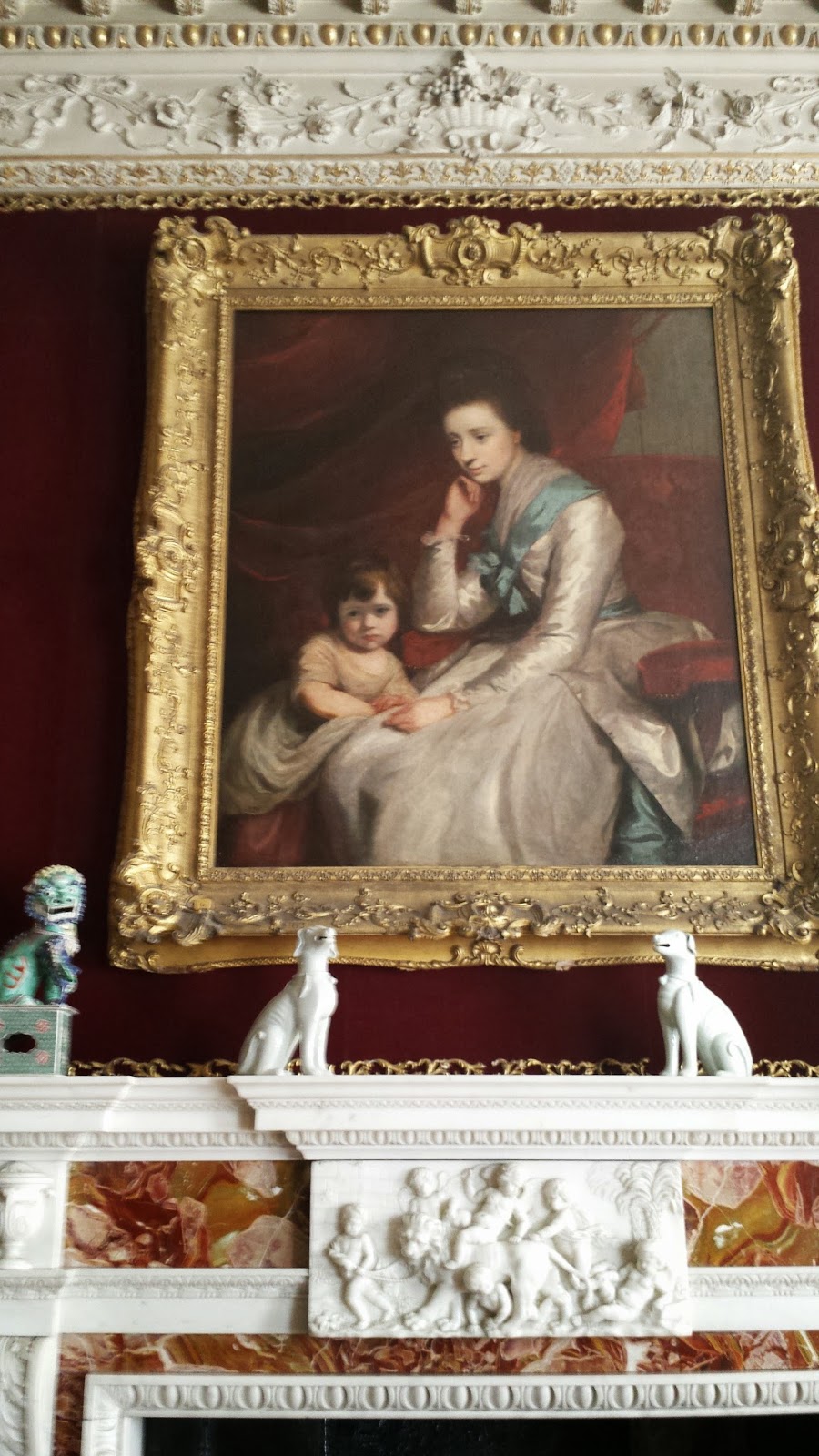 A portrait at Saltram House﻿ 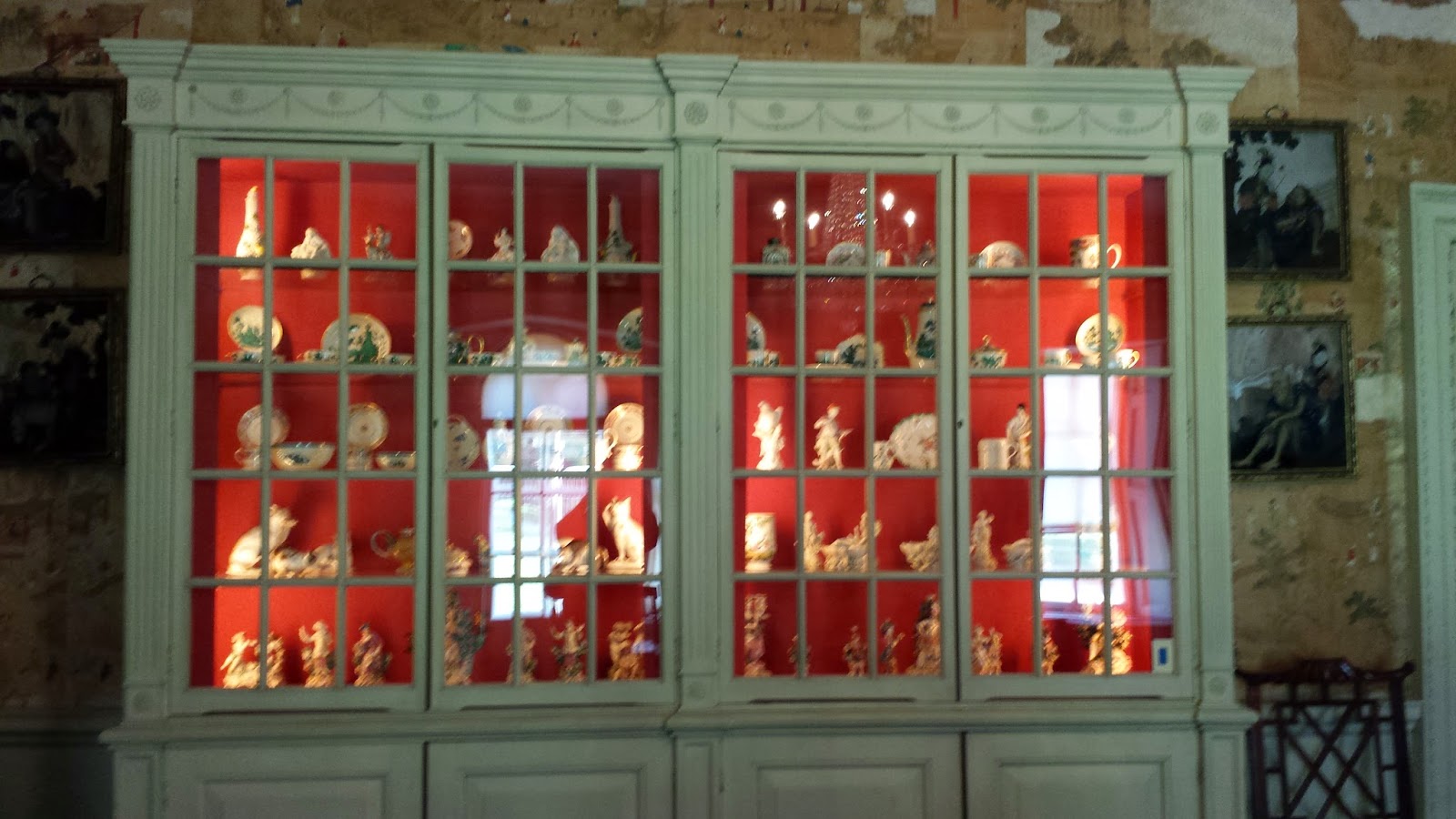 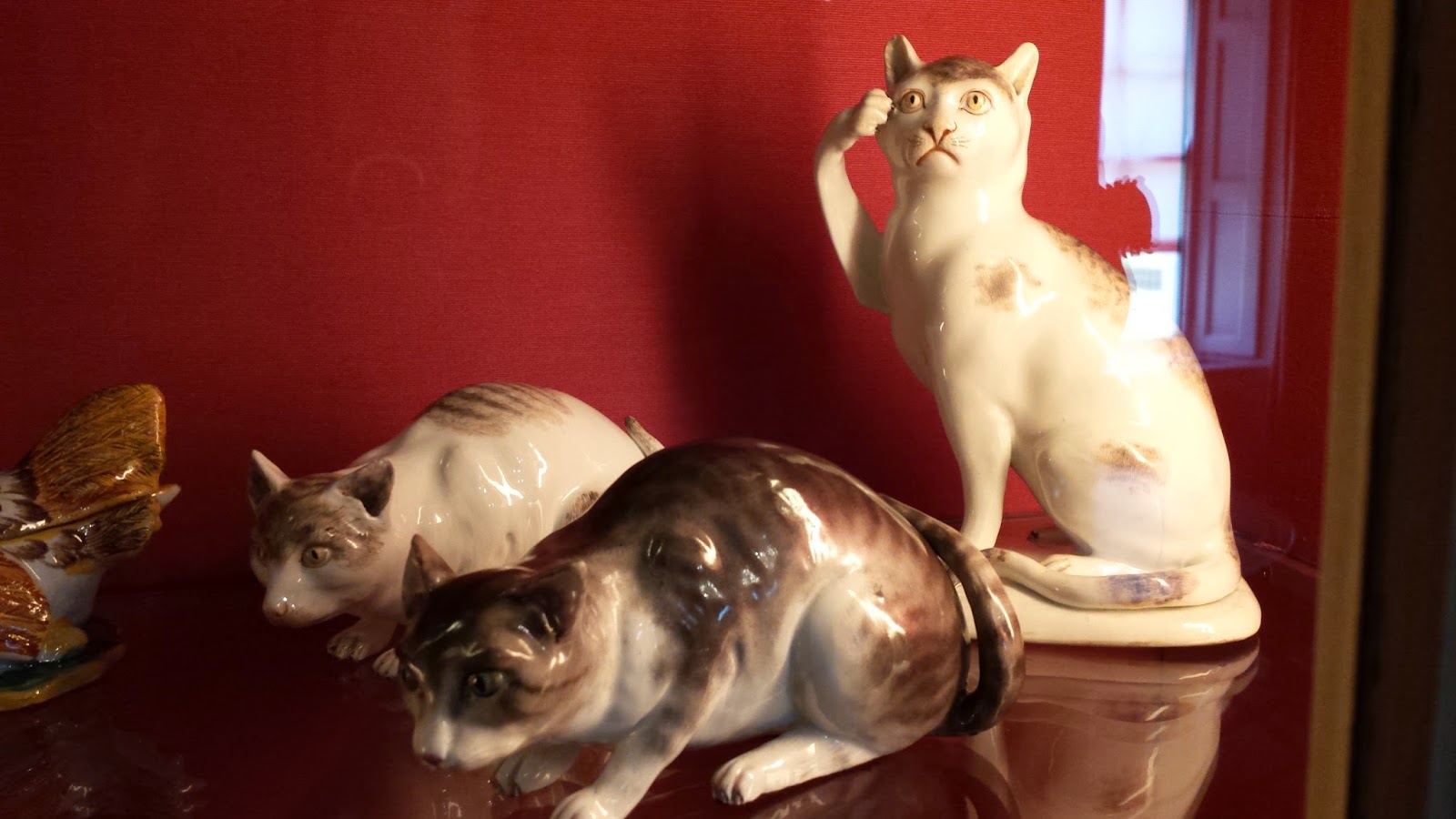 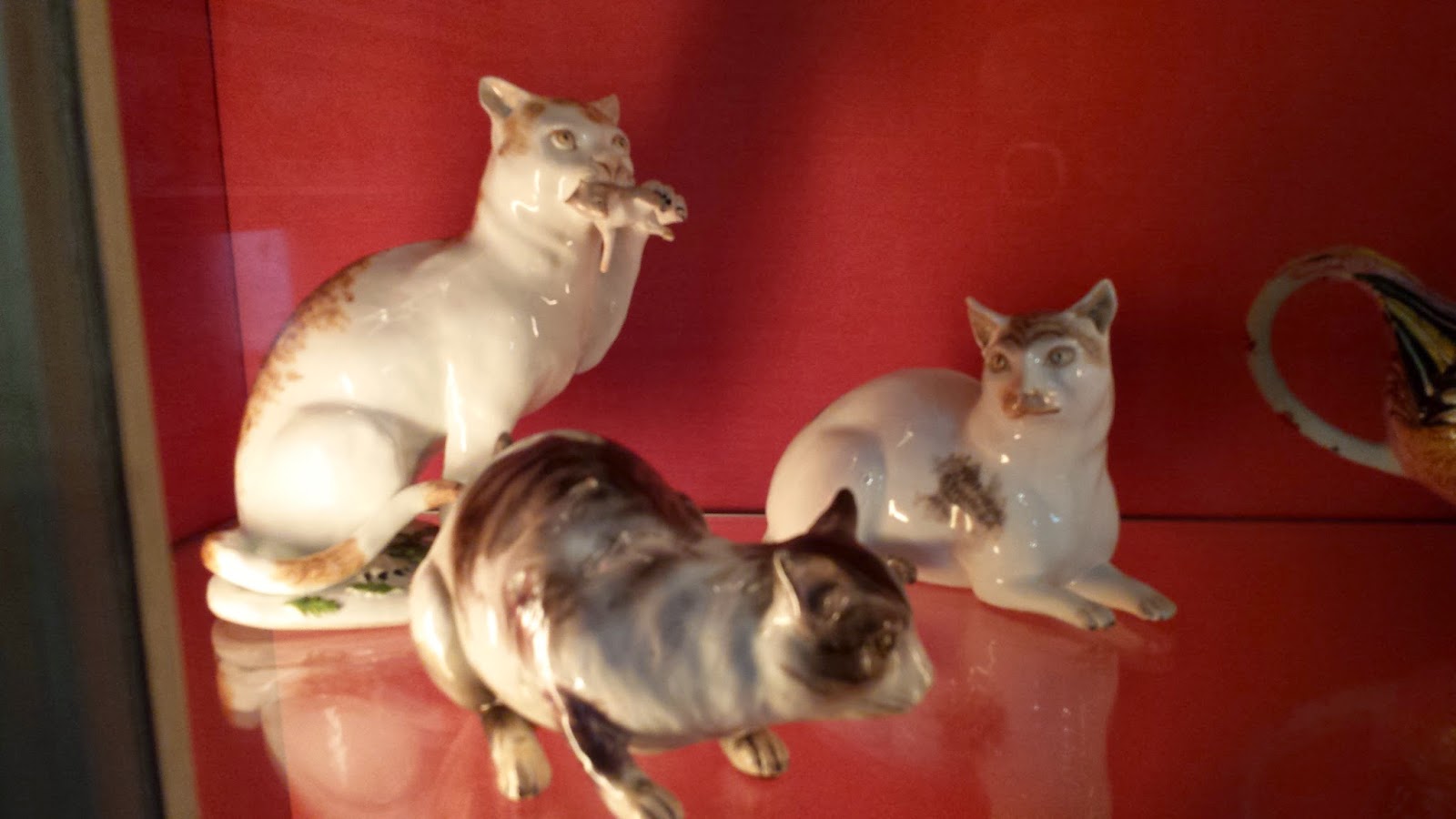 Occupants of the cabinet
There's lots of Chinoiserie and lovely curiosities, and many portraits of Countess Morley, as well as the interesting and accomplished copies of paintings she made herself. Her edition of Pride and Prejudice is to be seen in the exquisite library, and there are also some papers of Henry Austen, who was her chaplain or clergyman, after JA died.  We "did" the house thoroughly, then had some lovely duck pate and salad and tea in the cafe. Then Lynne drove me to Plymouth station, where I had a slight mishap: in my haste on the outward journey I didn't take my receipt from the ticket machine, had no proper return ticket, and had to fork over another £50 for a new ticket. Never mind; these things happen in traveling, and here I am comfortably on the train going back to Paddington, watching the Dartmoor sea wall slide by with boats gayly scattered on the water. 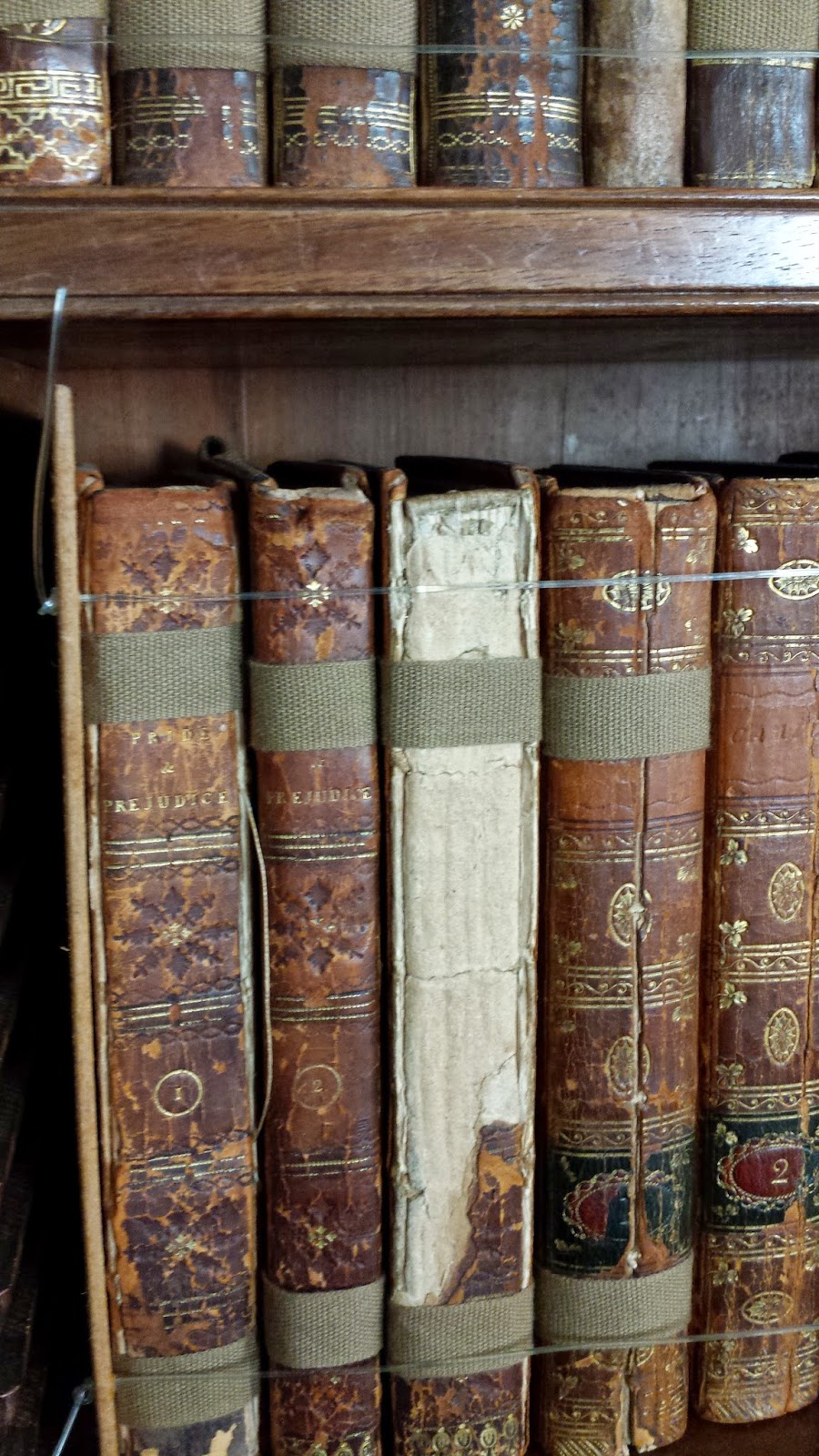 The Countess of Morley's copy of Pride and Prejudice 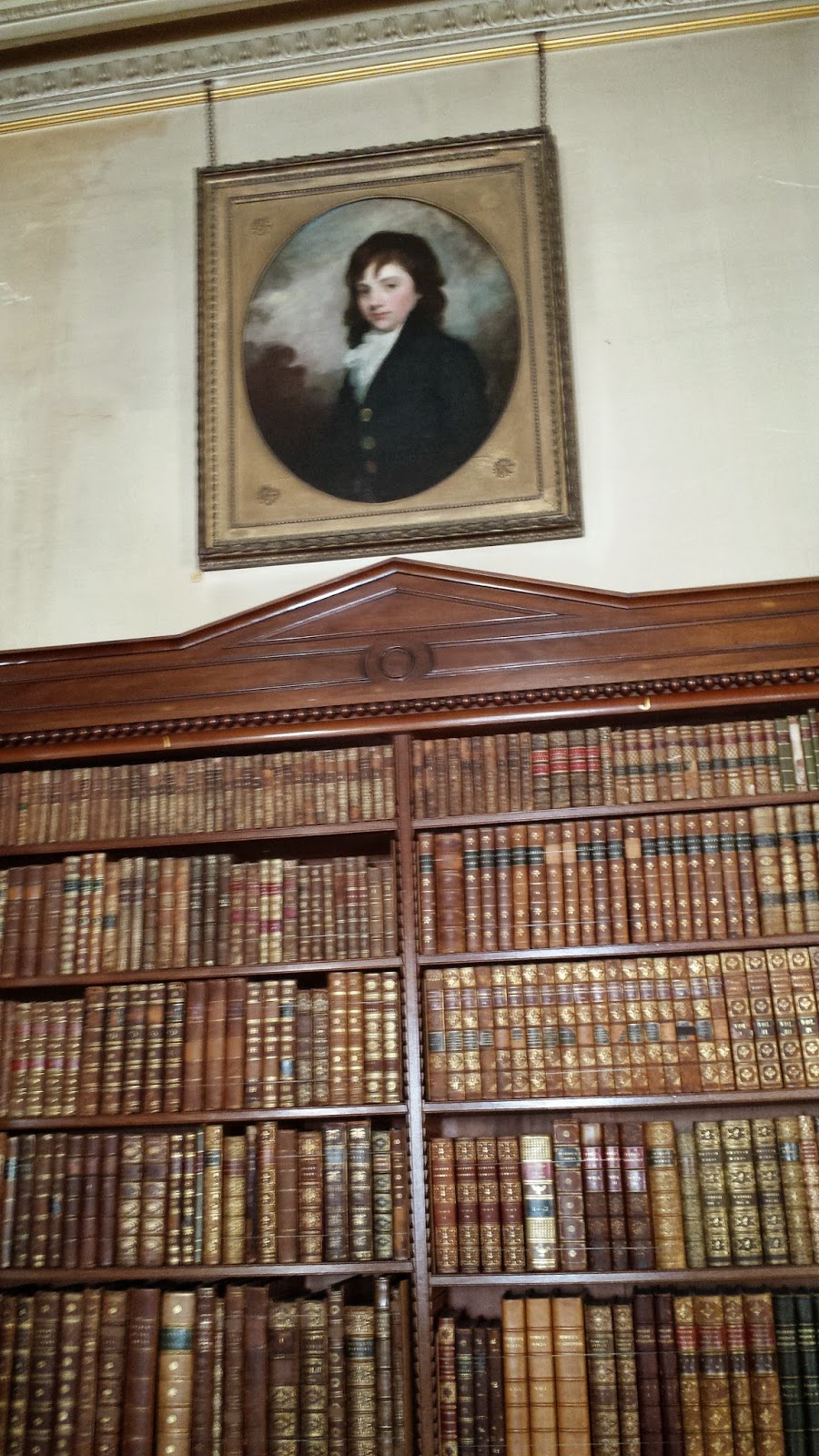 Lord Morley as a boy, portrait in the library 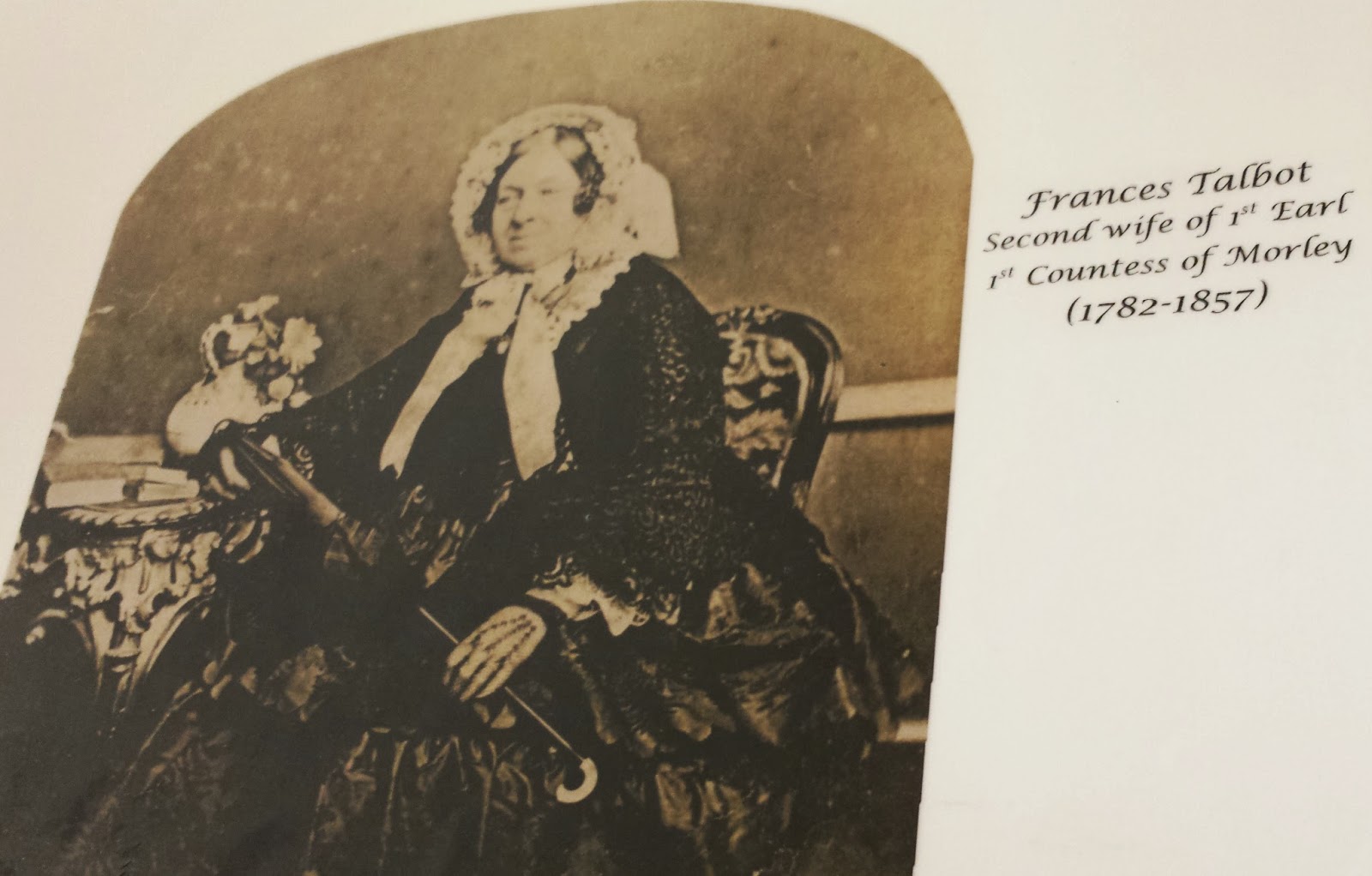 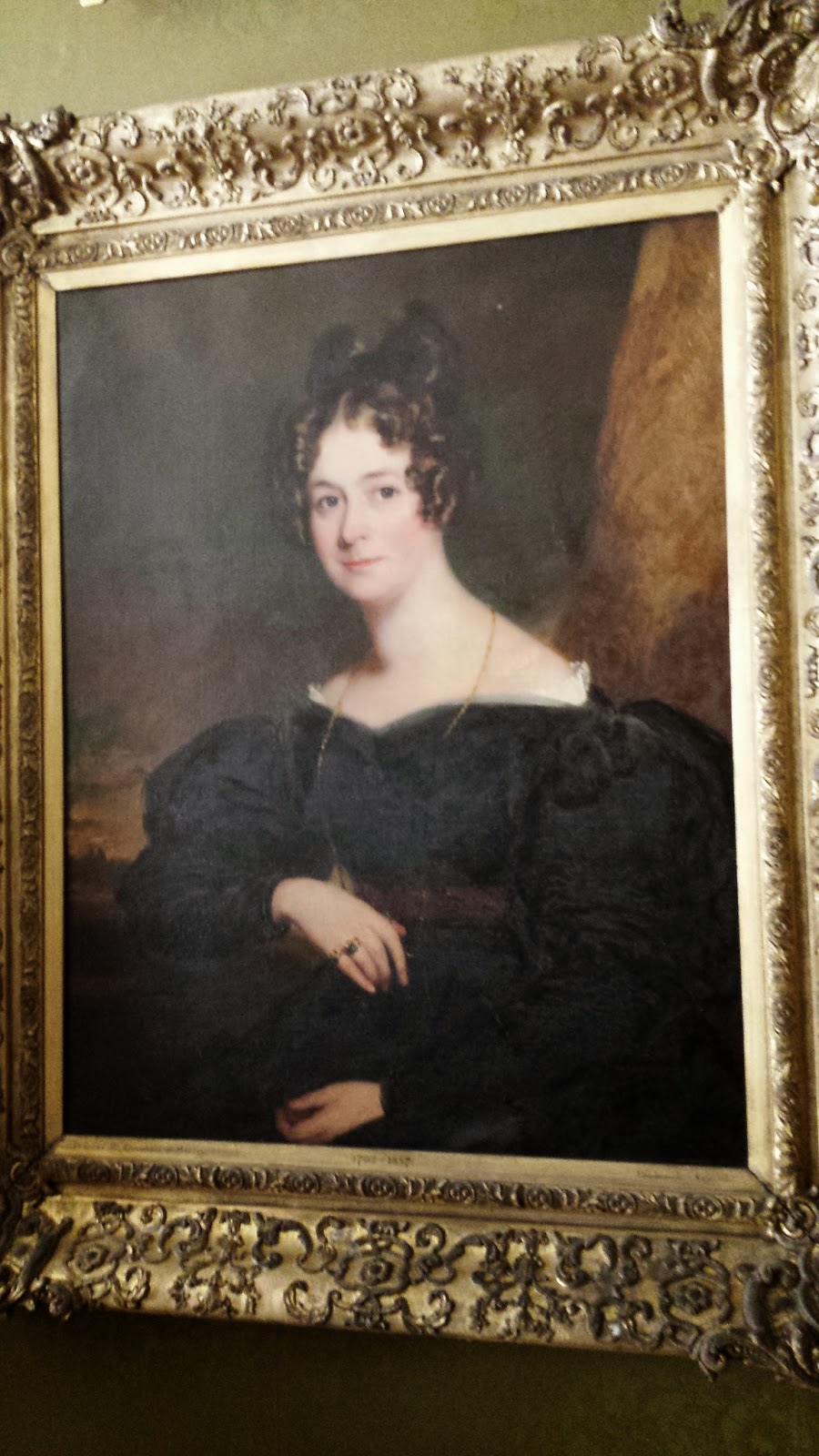 I would have loved to see Saltram house. The common fate for many of those houses not taken down is to become either a partly National Trust tourist attraction (also available for filming) or an expensive luxurious hotel.

Well, at least in both those cases - they're still here to be enjoyed! And that's a lot.

Firstly, I applaud the work of the National Trust! This island would be a darn sight worse off without it. Sorry you had to suffer a rude guest at breakfast, Diana, but you soon rose above it. A perfect day - I have Endsleigh and Saltram on my list. Can't wait for more of your reports. Barbara

Thanks so much, Barbara, your liking my travel writing is compliment indeed, as you are past master (mistress?) of the art (to make a play on that book title, too). Thoroughly agree about the National Trust, which preserves so many sublime places for us to see. About rude guests, that's just part of the Jane Austenian side of the human comedy of traveling, isn't it!

Also, when doing a travel post, I rather like to show a little shade in addition to the sunlight, with the idea that it may make it feel like a real diary to the reader (as it really is), so they can share the experience, warts and all. Obviously if something really AWFUL happened I wouldn't want to include it in a light hearted travel blog...but I think a couple of silly guests over breakfast is fair game! :-)

I agree, Diana. I think having to pay the additional 50 quid is AWFUL and I'm very sorry you had that experience. Just think of the number of books ......

Reading about Saltram house I remembered our blogs on the Countess of Morley and her remarks on Emma. Her house that was is filled with art objects I see.