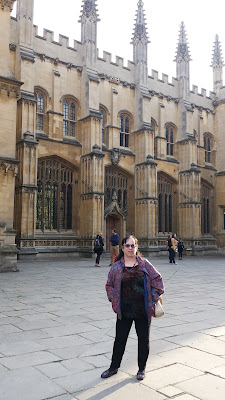 Arriving at the Bodleian

Off to Oxford on the Cambridge-Oxford bus, where my friend Jean has all kinds of festivities lined up for me!  People don’t speak well of this bus, say it’s a boring ride, but it’s the most direct way to go from Cambridge to Oxford; otherwise it would be train to London, cross the city from Euston to Paddington, then another train to Oxford. The bus takes three and a half hours, but relaxing on the coach with a good wifi connection is very comfortable and easy, and best of all I’m not driving!

Arrived at Oxford bus station at 2:30, where Jean met me, and we had a cappuccino, then took a taxi to novelist friend Lizzy’s lovely flat. Another novelist friend, Nancy from Canada, arrived, and after pleasant tea and chat I left my suitcase at Lizzy’s and we taxied to the Bodleian. I was lucky enough to be here on the day of a lovely event for the Friends of the Bodleian, Duke Humfrey’s Night (Jean and Lizzy are Friends, Nancy and I were their guests). The purpose was for friends to contribute toward upkeep of certain manuscripts - you'd get your name on the book’s container box if you contributed sufficient. The catalogue was online (see below), and we also got copies, so we could see the manuscripts to sponsor.

Some lovely ones:  Autobiography of a Pincushion, The Widow of Kent, Victorian funeral invitations, 11th century illuminations, altogether an eclectic and glorious hodgepodge. 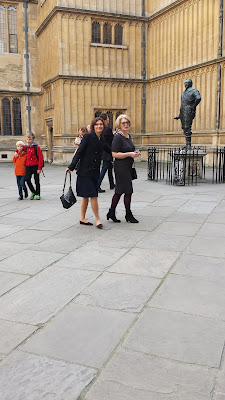 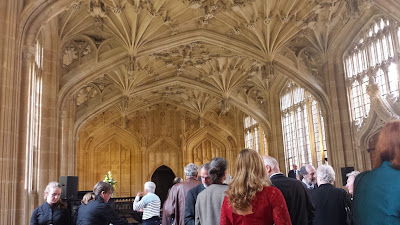 The books and objects were fascinating to pore over, but so was the crowd – they weren’t what I’d normally encounter in my daily round: dons and Oxford officials, several “Lady This and Thats,” a Duchess, and the great science fiction Brian Aldiss were there.  He’s now about 90, so warm and charming, and he told me he is writing a fictional autobiography. Also Michael Pickwoad, the illustrious production designer of Dr Who (and veteran of a long career that encompasses everything from Withnail and I to Lost In Austen) whom I met with his wife Vanessa when they came to my talk last year. 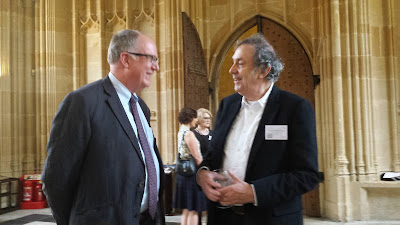 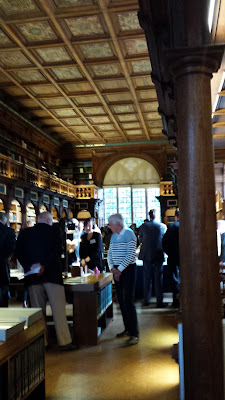 The manuscripts on display 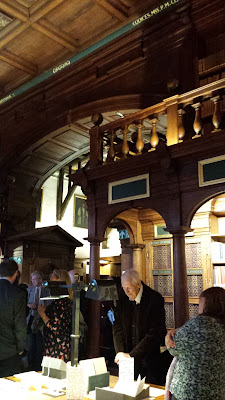 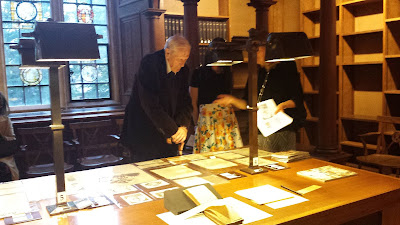 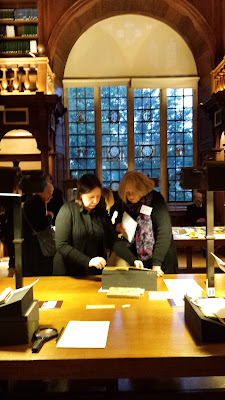 A librarian with friend Jean 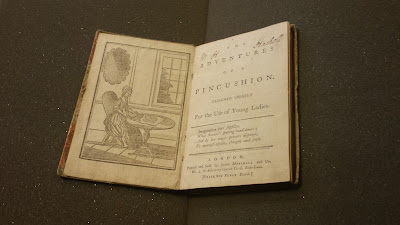 Adventures of a Pincushion by Mary Ann Kilner (1783) 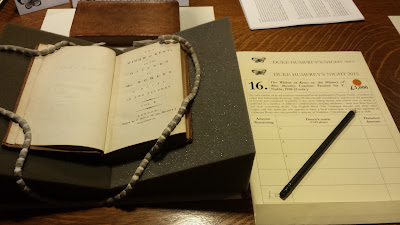 The Widow of Kent; or, The History of Mrs. Rowley 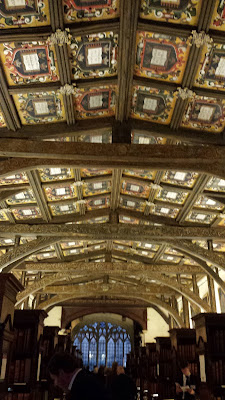 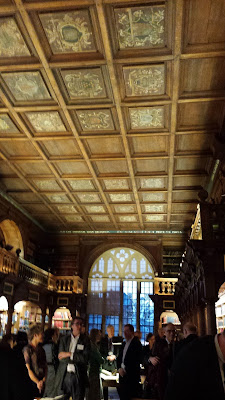 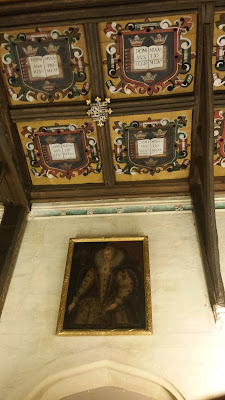 Between people-watching, examining the exhibits, and photographing the lovely images of the Bodleian with a lavender twilight falling outside, it was a distractingly sublime time!  Afterwards we met Jean’s husband Tony at the Old Bookbinders Ale House in Jericho, family run French bistro where we scarfed down steaks, then taxied back to Jean’s house on Cumnor Hill. 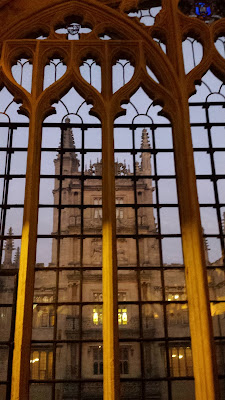 The beautiful windows, at twilight 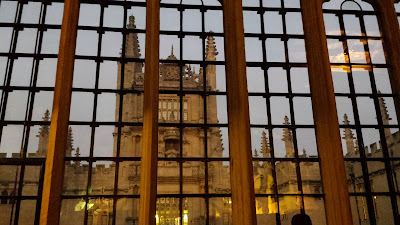 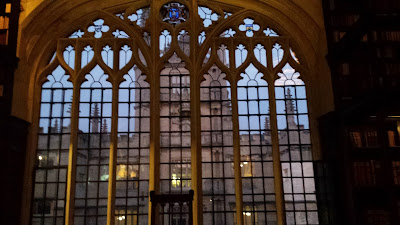 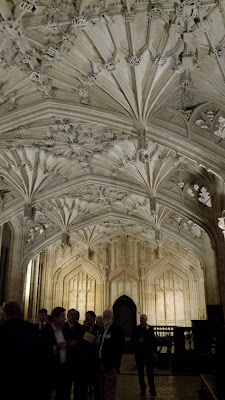 The Friends gather for a talk 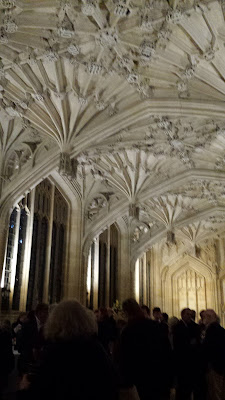 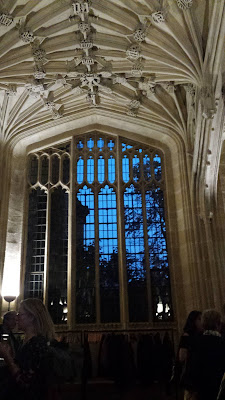 There is a Duchess in this picture, but it is too dark to see her!

Slept soundly, and Jean toasted me some lovely crumpets with delicious organic Yeo valley butter and homemade mixed berry jam from a friend's farm (I'm bringing some home packed well in suitcase so Customs can't nab it as they did last time). Then we took the bus into town and went to the Ashmolean, where it was the last day of an exhibit of the Regency painter Adam Buck. He mostly did neo-classical chocolate-boxy portraits, some of which were replicated on china…not a great artist, but anyone interested in the period would enjoy seeing his pretty works collected there. What I liked best were the portraits and material on Mary Anne Clarke, a “Beauty and a Star” of her day, who lived sumptuously, was patronized by the Duke of York, and appears in a Cruikshank satirical cartoon. Daphne du Maurier was her great-great granddaughter and fictionalized her life in her novel Mary Anne. 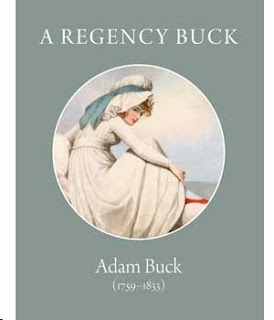 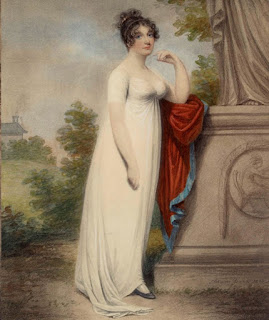 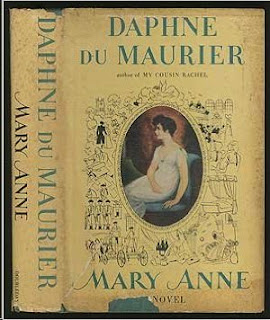 After enjoying the exhibit, we joined David, Alison and Polly, who run the Writers in Oxford group. They’d booked a table at the lovely restaurant on the roof of the Ashmolean, and we had a long and leisurely lunch, with lively chat about books and writing. The view of Oxford from the roof is nice, though slightly marred by the recent fire at the Randolph Hotel opposite, which was under scaffolding. The sun was so strong I ended up using a napkin as a sunshade and felt very relaxed!  Afterwards Jean and I headed to the Pickwoads’ for tea, so gracious of them to invite me!  Such a thrill, for they are easily the most charming, cosmopolitan, friendly couple I've met. Their lovely sunny house is filled with art, as their parents were both artists, and everything in it is a feast for the eyes (as the tea and exquisite lemon cake were for the body). It was bliss. 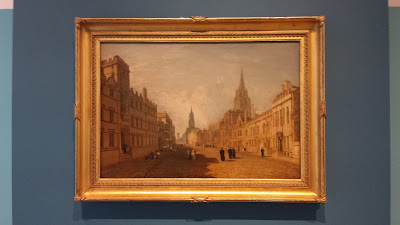 Turner's "View of High Street, Oxford," on special exhibit at the Ashmolean Museum 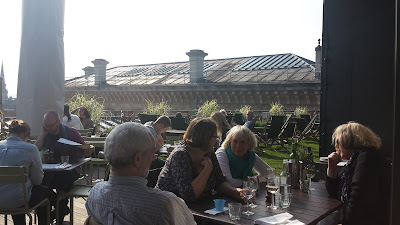 The restaurant on the roof of the Ashmolean Museum 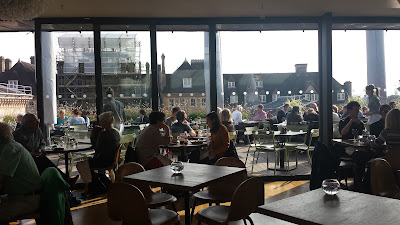 The scaffolding on the Randolph Hotel can be seen here 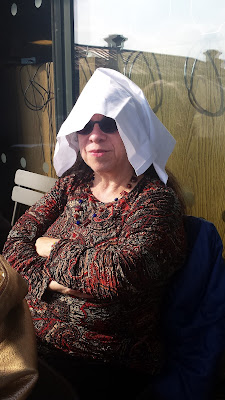 I'm almost too relaxed in Oxford!


Returned to Jean’s for a bit of a rest and dinner (Tony cooked a lovely stew), and then I took a taxi to the Oxford train station for the 9 PM train. Got there in good time, but the ticket counter was closed and the machines wouldn't take my credit card (American cards have no chip), so people said forget it, I should just pay the man on the train. But there was no man on the train! And when we got to Paddington, the barriers were open.  So I had a free ride, saving me 24 pounds (rather high for a one-way ticket – but then, I didn’t pay it!). Then taxi from Paddington to my London hotel, and my light was out for the night.
Posted by Diana Birchall at 1:57 AM

It's wonderful to see the Bodleian again, Diana. Great picture of you with the napkin on your head! And thank you for reminding me about Adam Buck--I've been meaning to order the catalogue ever since I first heard about the exhibit. Will do so right now.

I brought the catalogue book home with me, Sarah, and it's beautiful - I recommend it!

Order confirmed. (Shipping costs the same as the book itself. Glad to hear it's worth it!)