London! In Which I am Whisked to Wicked Twickenham. Post 2.

The seven-hour flight from New York to London is so much easier than the eleven hours from Los Angeles, that even though it was an overnight flight and I couldn't sleep, I felt fresh and excited on arrival. Checked into the hotel, dumped my luggage, and then sallied out to the Royal Academy, to see an exhibit I'd had my eye on: "The Age of Giorgione." 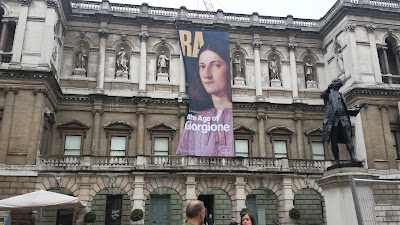 Although it was a small exhibit, compared for instance to the massively comprehensive Vigee LeBrun I saw at the Met in New York, it was intense. A handful of these exquisite, vibrant, meaning-soaked portraits were the kind of paintings that burn themselves into your eyes and mind. Here's one of a melancholic poet I stared at for a long time; Georgione's genius lies in revealing the individual: 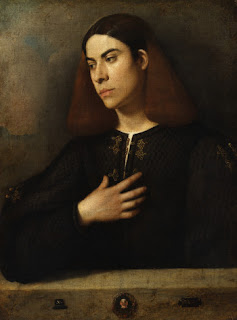 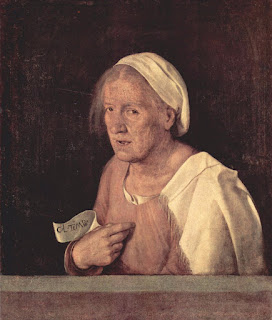 "La Vecchia", presumably Giorgione's mother, points to the depredations of age in herself. The paper she clutches reads "Col Tempo" - with time.

Little is known of Giorgio da Castelfranco (Giorgione) but he is said to have lived wildly, and died at 32, of the plague caught from his lover, on the Lazzaretto Nuovo in Venice. I've actually been there, mostly paying homage to Diaghilev, but could have dropped a flower for Giorgione too... 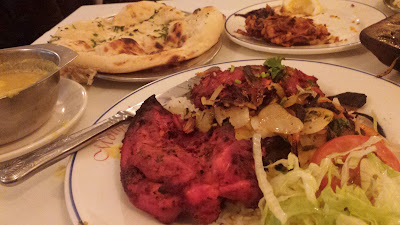 Finished off the day with an Indian meal at my favorite quiet little Indian restaurant, Mohadjheel, in Marchmont Street around the corner from my hotel in Cartwright Gardens. 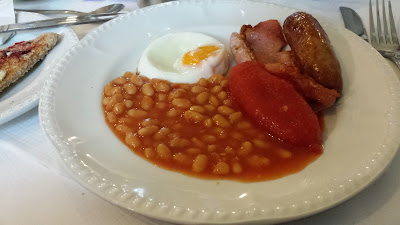 London breakfast
From my diary:

Slept to a miracle at the George. Their renovation a couple of years ago has been transformative. Marble floored bathroom (well faux but feels nice),one of those water-on-the-floor ones without a step or door. (It has been my private opinion since my first visit in 1968, that English bathrooms are mad. No offense meant to the many wonderful English friends I have made over the course of 36 trips, but in my experience it is just so.)

It was grey and a bit humid when I got up, but not raining. Had my lovely English breakfast. Then I set out for St. Pancras, very close to the hotel, but I was feeling a bit flustered, it being my first morning, and St Pancras and Kings Cross, so huge, with so many separate buildings, can be a bit disorienting when you're rushing to find the right one. I missed having coffee, though in the end the train was a bit late, and when I arrived at Peckham Rye it was pouring! 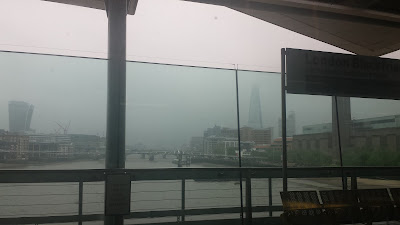 On the way to Peckham Rye

My friend Ron Dunning was waiting, and drove me to his house to visit the cats. Rufus the stocky little three legged ginger, cuddled and purred. His father, sleek grey Max, was running and leaping lithely. Tiger Lily, the Pindy-like tabby I'd come to see, was elusive but Ron found her and brought her to see me. She wouldn't stay but I at least did get to pay homage to the little mother. She's imperious, and brooks no disagreement from her son and erstwhile husband. 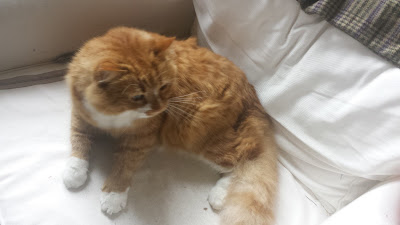 Ron, my human friend, is the friend everyone ought to have on arriving in London - at least if you're interested in the city and its history. Ron has "the knowledge," not only of London and the best ways to drive around it, but more singularly a rich historical knowledge, that can casually show you where the Fleet used to be a river, and precisely how neighborhoods have changed over the centuries. Driving with him opens new vistas of what you are seeing as if a hand is revealing what's underneath - I can never go back to how I saw London before the tours Ron has given me on recent trips, a truly great gift. On this occasion, we set out driving to Richmond via Roehampton, and saw the deer in the park. 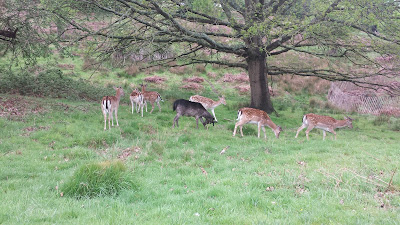 Walking by the river, we reached Ham House, an impressive pile in the grand old manner. We fortified ourselves with lunch (lentil soup with scones), and then went over the house, with its scores of dark old paintings and portraits of the ages of King Charles I and II, green views out the windows, and elaborate furniture within. 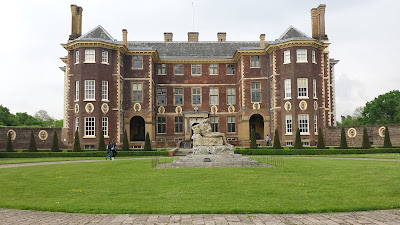 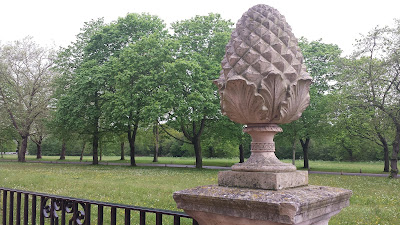 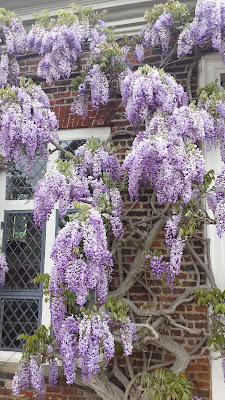 Wisteria on the Ham House grounds

I particularly liked the Green Room that had been the duke's "closet" and was left just as it was in 1700s, cluttered with pictures and ornaments. It was "open cabinet" day, which apparently occurs just a few times a year, when all the cabinets had doors open and could be better seen. This fanciful Japanned creation in the Green Room was spectacular. 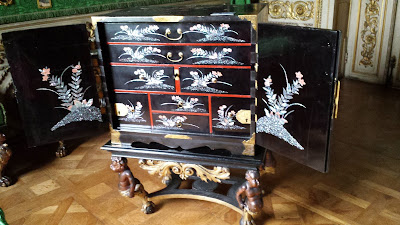 There were also marvelous miniatures, and my favorite was this one, "A Man Consumed by Flames," made by James Oliver in 1610. The inscription reads, "He freezes who does not burn." 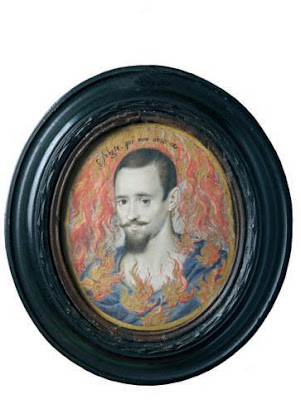 After seeing the house we walked back to the river, and took a little ferry across to the Twickenham side. 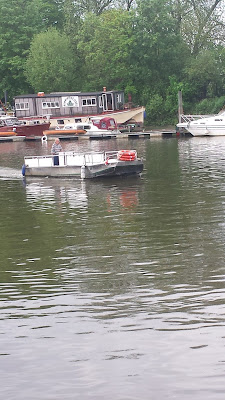 From the ferry we walked to see Marble Hill House, where lived George II's mistress Henrietta Howard, Countess of Suffolk. This was an enchanting house, built in the 1720s, and much copied (the model for many plantation houses in the American colonies) with a fascinating story behind it. 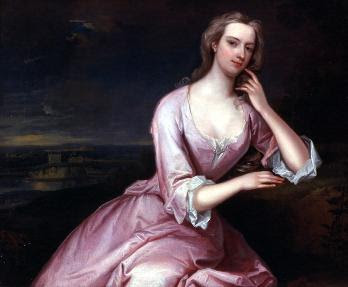 Paid well by the king, Henrietta had the house built for herself, and although she was deaf, her wit and intellect were such that her home was frequented by a glittering circle that included Alexander Pope (who wrote verses about her), and Jonathan Swift, John Gay, Lord Chesterfield and Horace Walpole. Years later Mrs. Fitzherbert, mistress of George IV, on learning of his marriage, exiled herself to Marble Hill House, so it has a royal and romantic history. 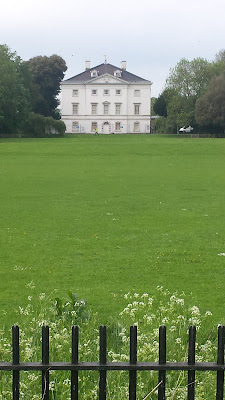 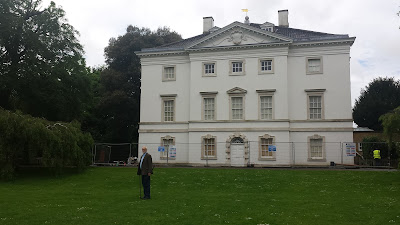 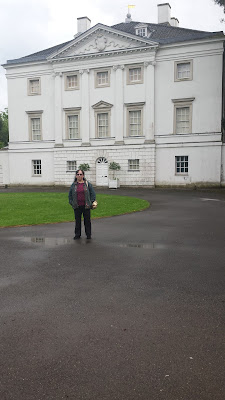 Me at Marble Hill House

Ron, who is a descendant of the Austen family (multiple great grandson of Francis Austen), knows his Jane Austen well, and, possessed of an acute historical imagination, reminded me that Twickenham is where Maria eloped with Henry Crawford in Mansfield Park! 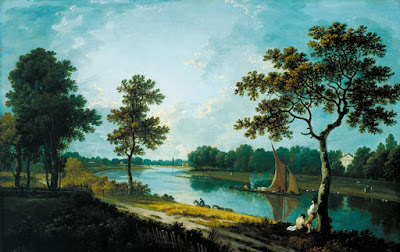 "View of the Thames," by Richard Wilson, 1762.  Marble Hill House on the right. A romantic retreat...

"Mrs. Rushworth had gone, for the Easter holidays, to Twickenham, with a family whom she had just grown intimate with: a family of lively, agreeable manners, and probably of morals and discretion to suit, for to their house Mr. Crawford had constant access at all times."

Mary Crawford writes cynically to Fanny: "Mrs. R. has been spending the Easter with the Aylmers at Twickenham (as to be sure you know), and is not yet returned...I suppose Mrs. R.’s Easter holidays will not last much longer; no doubt they are thorough holidays to her. The Aylmers are pleasant people; and her husband away, she can have nothing but enjoyment."

At the end of the novel, Edmund laments Mary's casual cynicism: "She saw it only as folly, and that folly stamped only by exposure. The want of common discretion, of caution — his going down to Richmond for the whole time of her being at Twickenham — her putting herself in the power of a servant; —it was the detection in short — Oh! Fanny,it was the detection, not the offence which she reprobated."

But Twickenham has still another wicked association in Mansfield Park, as the site of the vicious Admiral's cottage. What a place!

Mary Crawford relates: "Three years ago the Admiral, my honoured uncle, bought a cottage at Twickenham for us all to spend our summers in; and my aunt and I went down to it quite in raptures; but it being excessively pretty, it was soon found necessary to be improved, and for three months we were all dirt and confusion, without a gravel walk to step on, or a bench fit for use. I would have everything as complete as possible in the country, shrubberies and flower–gardens, and rustic seats innumerable: but it must all be done without my care. Henry is different; he loves to be doing.” 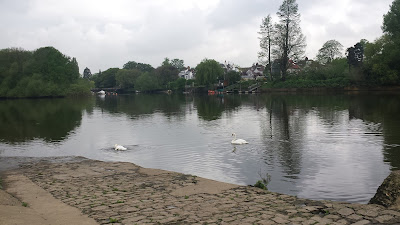 The Thames near Marble Hill

Such quotations, associations, and reflections, aided by Ron's descriptions, made beautiful but wicked Twickenham come alive for me. I liked seeing the place where nobles came down the river in launches for their louche parties, or to visit the little mistress they had stashed away. Seeing the river, the houses, thinking about the stories, both literary and historical, it suddenly all seemed so real, and so much easier to picture. 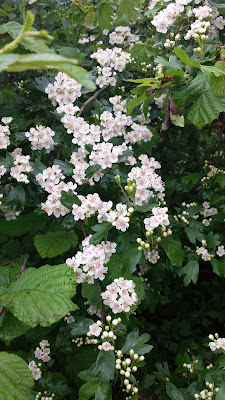 Hawthorne in the park

We then started the long drive home, with a brief stop to walk around the gardens of Strawberry Hill, Horace Walpole's eccentric folly of a house. We finished the day with another Indian dinner at Mojadheel. 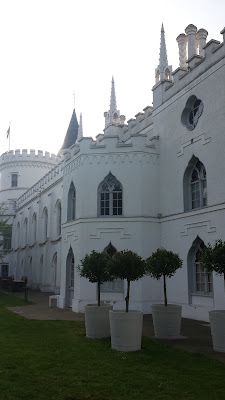 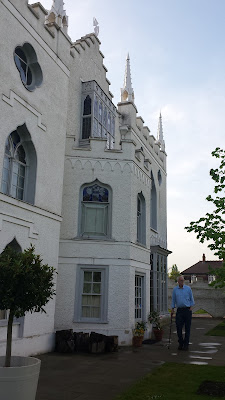 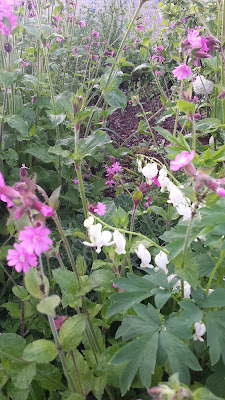 Loved this adventure of yours. Especially Strawberry Hill and the environs. I had forgotten all about the elopement to Twickenham.

I had never seen hawthorn before! Thank you! And ad always I greatly enjoyed your travelogue.

I moved to Marble Hill, in Twickenham, within a few months of arriving in England, and lived there for the next year and a half. I knew that it was a lovely area, but assumed that most of London was the same. It's not, the riverscape between Richmond and Twickenham is a treasure – rus in urbe, or at least sub-urbe. (Latin for country in town, but it sounds more poetic in Latin.)

All we know about Jane is what is included in surviving letters. We don't know whether she ever took the comparatively short walk from Henry's house in Henrietta Street to Brunswick Square, or the pleasure boat upstream to Twickenham – but both of those pleasures were available to her. She knew that Brunswick Square was a new development on the north edge of London for the middling class, and that Twickenham was far enough from town to keep one's mistress there, or to elope to.

Now that I'm deeply involved in the study of the Austens I passionately want to educate visitors about the actuality of their lives, and to divert them away from thinking only of the movie sets.

Diana, I'm pleased that you have been such a willing subject! Next year we should make a point of getting to Strawberry Hill during opening hours and, if possible, make time to get to Syon Park as well.

Wow! Busy first day in London. What an amazing talent for one who died so young. Those west of London houses are on my list now that I have a bit easier access to that part of the river from Surrey when based at my son's place. And all I knew about Twickenham was that it's the place my husband visits each year to see rugby football 6 nation cup games! Barbara

So, brief comment: I'm afraid I remember the lovely shot of Ron's cat best :) (Also the photo of the Chawton House pussycat -- poor thing is right, all these guests continually crowding his or her space. The photos are lovely -- I have been to Ham House but not the other places. It seems so good that you could visit Ron's house too.

The man in the miniature looks a lot like your husband!