Another Day, in the Park 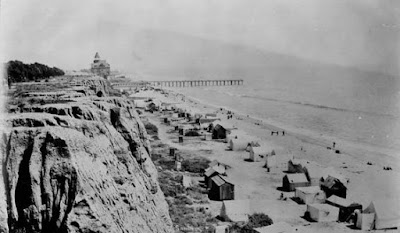 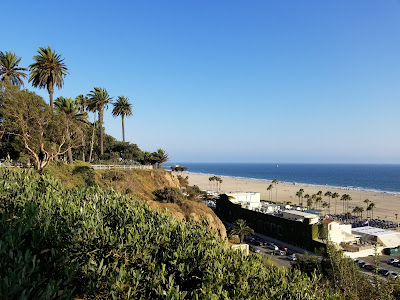 View from approximately the same spot today. The cabins are gone, and the Pacific Coast Highway runs below, with beach clubs and houses beyond. The pier (not the same one as in 1887) is partly hidden by trees but can be glimpsed if you click to enlarge.

Here is a short essay I posted on Facebook, about Saturday's walk...followed by pictures:

The picture (top) of the Santa Monica bluffs, aka Palisades Park, was taken in 1885. This was before trees, Australian eucalyptus and palm allées, were planted, and when there were still beach huts on the sands below. It's where I walk now every evening, 130 years later. I used to think it was a pretty but not very interesting park, and didn't bother with it, preferring to stay indoors and wish I was in England. Now that I walk it regularly, I'm finding that every night I see more. Tonight I saw a brief gleam of orange sunset between two layers of heavy grey fog out to sea. I saw a probably mentally ill and homeless young woman, walking a skinny cat on a leash. The cat was ecstatically enjoying the outdoors, and tried to climb a fig tree. By contrast I saw the usual numbers of wealthy homeowners walking their posh exotic dogs on their own evening strolls - though not a dog person I've come to recognize many of them (but not their owners). There's a Newfoundland that looks like Nana in Peter Pan, several pit bulls, a silky brown she-creature with cascading hair, a velvety black dog with russet legs who wrestled with a palm frond, and many more. I saw a crazy eyed heavy set man with wild hair and a T-shirt on which I glimpsed the words "Ass" and "Shades of Grey." A squat, very aged, poor woman in layers of uncleaned schmatas and flat silver braids, walked with a very young Japanese man twice her height. I caught snatches of their conversation, which was about Tai Chi and Harry Potter. While doing my stretches, I was approached by a youngish man who wanted to know if the stuffed spider perched on the fence near me, was mine. I pointed out that it probably had been dropped by a child, and some kind person had placed it there to be found. He commented that he could do what I was doing, and I replied "I should hope so!" upon which he smiled and departed. A lovely young couple asked me to take their picture, and I did, with her sitting perched on the fence, he kneeling before her. I got some very nice shots and they were sweetly, ingenuously grateful. Reaching the lavender bed that's my turnaround point, I inhaled the powerful scent, and looked out to sea where a small boat had its lights shining. A young couple sat outside the fence in forbidden territory, dangling their legs dangerously at the edge of the cliff, and smoking marijuana. They glanced at me warily but I smiled and they puffed on, reassured. On the way back I paused for more stretches by a cinquefoil shrub, and noted how narrow and vertiginous the bluff was at that point, so eroded they'd put in metal posts to hold it up. A professional woman who sometimes paws over the jewelry at the Salvation Army beside me, nodded at me pleasantly, going the other way. Coming to a soft stretch of green turf, I gently jogged toward the Montana Avenue traffic light, where I turned for home. 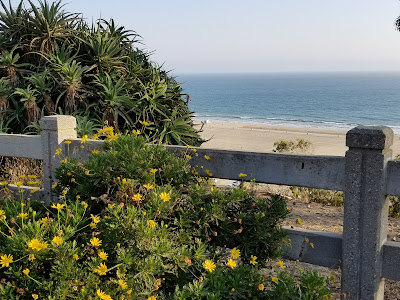 Cinquefoil shrub (at least that's what I think it is) 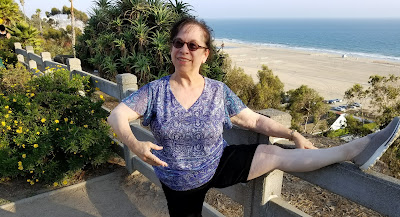 Dancing by the cinquefoil 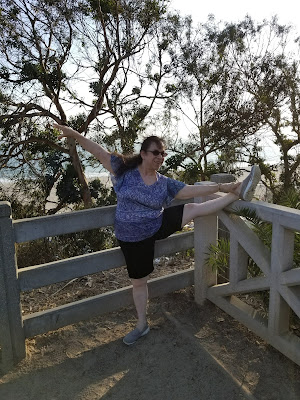 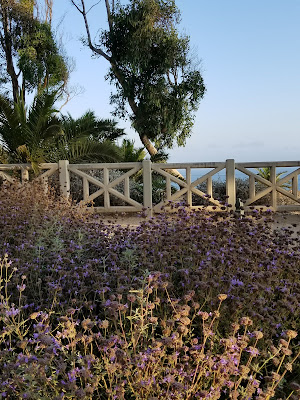 Lavender garden, at Inspiration Point, the fragrant turn-around spot of my walk. 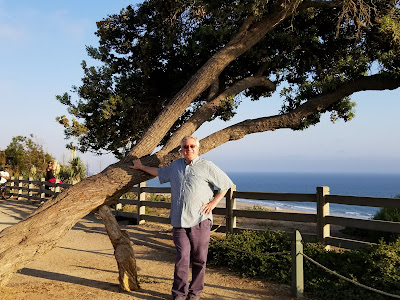 Paul by one of the century-old, nearly horizontal Australian tea trees 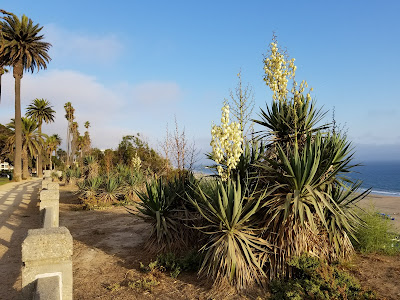 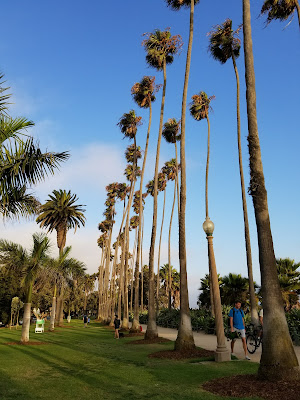 Palm allée. This is where I start to run, because the turf is so springy. 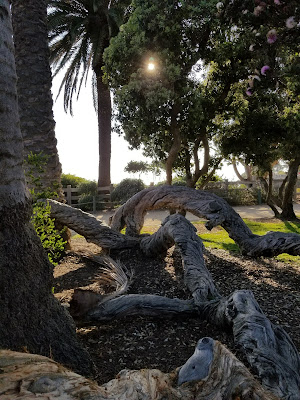 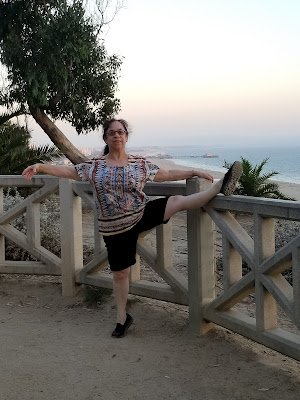 And more ballet, another day... 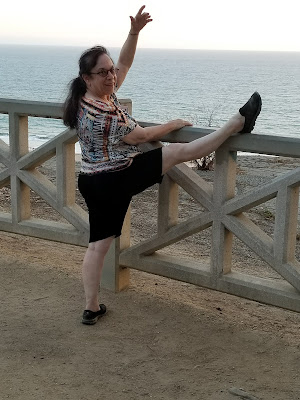 Posted by Diana Birchall at 2:07 AM