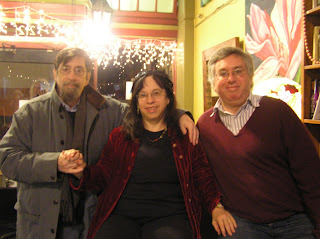 Peter, me and Paul at the Novel


On Christmas Day, we went to the annual party at the Novel Cafe. The Novel is a used bookshop/coffeehouse in Santa Monica where my family and I have been regular habituees for...17 years now. I know because Paul moved back to Los Angeles from Chicago (where he'd gone to the University of Chicago and lived after college) in the early 1990s; he was 27 then and he's 44 now. We found the Novel that year, and it's been our coffeehouse, our home away from home, all these years! It's been my workplace, in particular; I've done a good deal of my work there, both writing and story analysis, though somewhat less in recent years, as the place has declined since its heyday. 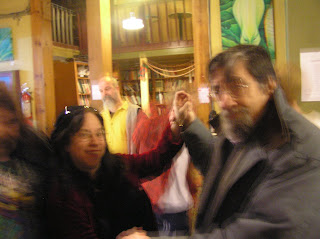 Me and Peter dancing


It's still a comfortable place to work; I like to sit at my counter with a cappuccino and my laptop, for at least a couple of hours every day. No one bothers you while you're working, and for someone who works at home, it's nice to get out for awhile. And even though I don't engage with people much, it's good for people-watching of a sort I probably wouldn't get to do otherwise: there's an interesting mix of professionals and homeless, students and screenwriters and neighborhood people. Homelessness has long been an enormous problem in Santa Monica, and it's always been difficult for the management, to keep the welcoming bohemian feeling and yet not be entirely taken over by street people so as to make customers uncomfortable. 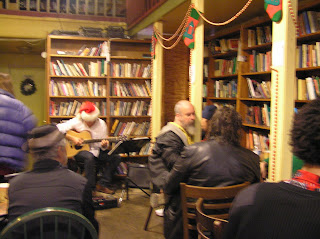 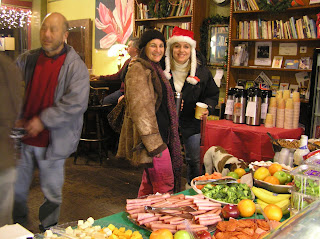 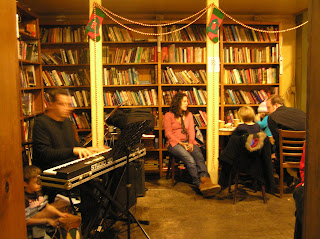 
On Christmas Day, however, the Novel opens to all for a party in the early evening, and the mood is warm and cheerful. I think this year wasn't as joyous as last year, when there seemed to be more of what Emma calls a "dancing, singing, exclaiming" spirit; I don't want to be so banal as to say maybe it's the general economic mood, but it did feel just exactly like that. Nobody seemed to be feeling very blithe or exalted. Still, people were clearly enjoying the food and the music, the fact that dogs were allowed inside for once, and everyone was saying "Merry" Christmas to each other with nice smiles. 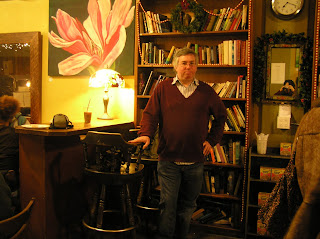 Paul at the Novel 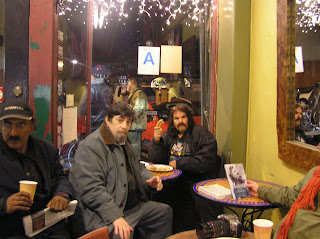 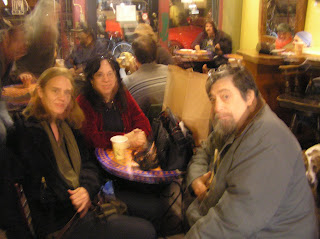 Jennifer, me and Peter

And where were the three little kittens? At home, dreaming of sugar plums...We had our Christmas turkey later, with friends Andy, Jennifer, and Lee. Pindar, Catullus, and Martial were little angels and stepped neither upon the turkey nor upon the pie... 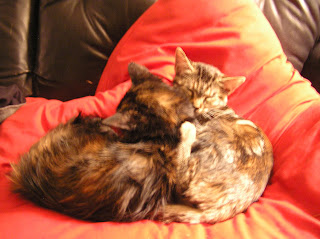 Catullus and Pindar asleep
Posted by Diana Birchall at 1:27 AM

I and our oldest son share a common dream - to open a used book store. If I ever do it will be a place like this :-)

How lucky you are to have such a place. The kittens are like ours. They bond. I don't know that I have any pictures of Jim and I dancing. We did used to dance a lot when we were young. Like Austen, I love to dance.