Pindar, Catullus and Martial are At Home, Receiving. Or: Do Not Name the Dish from Which You Will Not Drink 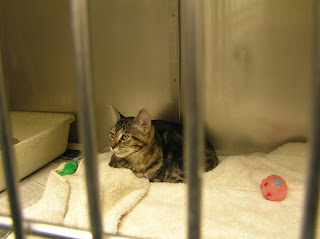 I've always said that I would never, ever stoop to writing in a blog about my cats. When blogs first became popular I was repelled by them; the many fine literary and book reviewing blogs, the blogs that take you into English gardens and show you different scenes of Venice every day, had not yet appeared, and they all seemed to be horrible diaries that people had narcissistically and with poor judgment put on line, writing torrential accounts of stupefyingly dull daily activities, always interspersed (it seemed) by pictures of their cats. That, I swore, I would never do. But here I am, on the first day of the Rule of the Cat Queens era, introducing my newly acquired, charming trio to the world! 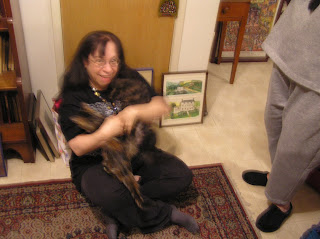 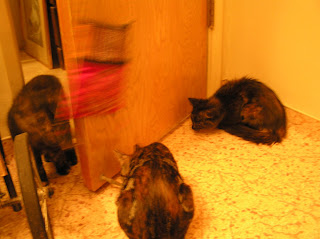 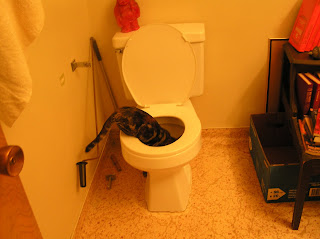 
I went to the Santa Monica Cat Shelter to finally adopt the cats of my choice, the striped Bengal tabby I already thought of as Pindar, and one of its two soft black, red and brown siblings, to be named Catullus: a Greek poet and a Roman one, names chosen by Peter, who had a preference for boy cats. An alternate name was Martial, for the Epigrammatist, but in the event, Peter was slated to be in for a slight shock: all the cats were girls.

I thought it was a shame to break up the three litter mates, as they were obviously very attached; every time I saw them they were hopping all over each other, one wriggling heap of fur. But I couldn't imagine a house crawling with three cats, so I chose my two, and went to do the paperwork as the clerk put them into a cardboard carrier. I had a hair appointment, so quickly stopped at the pet store to buy two litter boxes and some litter, and then drove the cats home, giggling at the little "mews" coming from the back seat. At home, I opened the box, and first one kitty, then the other, poked up their heads and after a cautious moment or two, hopped out of the box. They then proceeded to act as all visiting cats do in our book-and-object filled home, and went running around everywhere sniffing. I set up the litter boxes on the terrace and left the kitties to get acquainted with their new home, while I went out for an hour. 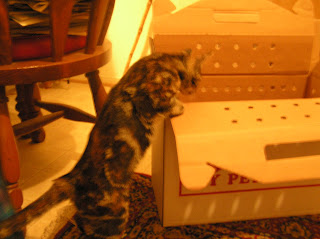 The Box I Came In 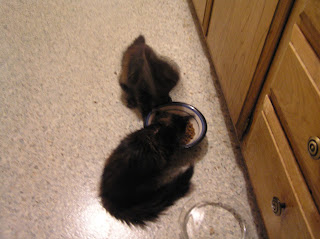 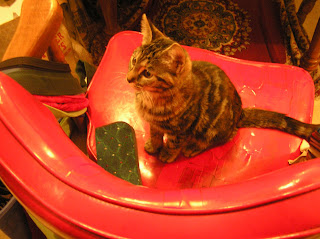 When I returned, I saw a dark black and brown cat streak by, and then another...and then the first again. And I realized to my horror, that the clerk had given me the two dark siblings, and kept back the very cat of my desire, the striped Bengal tabby! What to do? In chat, I consulted briefly with two friends, Sandy and Lynne, who intimated that certain things were "meant," and I called to consult Paul, who was at the library. The kittens' grandfather human, Peter, was asleep and did not know the Solomonic Choice that was occurring at that moment. But rather than bring back one of the dark sisters (which?), I called the shelter and told them what happened, and that I'd be coming by for the striped one. Fortunately it's the evening they're open late, and I picked up Paul and we went over together. And what a sad sight met our eyes, the poor Bengal Pindar all alone in her prison-like cage, looking intensely forlorn and waifish. It was impossible to resist that face, and the clerk sold her to me for half price, a family rate for three. She is, like the others, not a Bengal after all but a Tortie (Tortoiseshell Tortie or Torbie. Like calicos they're a genetic anomaly that's almost always female). She mewed all the way home, unaware that she was to join her sisters; and when she came out of the box she was hesitant and sniffing for about five minutes, but was soon Pindar, the Queen of the Litter, streaking around the house in circles, galloping and leaping with unfettered abandon. Not one of them had so much as a single instant of fear: our large and object-stuffed house was clearly, after the jail cell, pure Paradise. 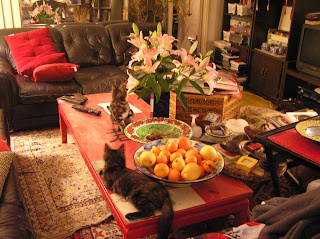 A House Full of Things 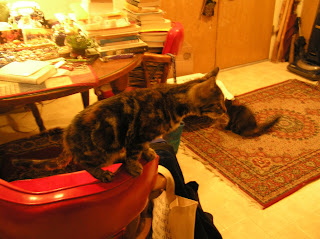 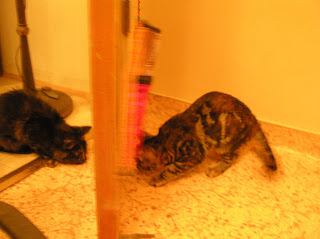 Within an hour Paul and I, and our cat-struck neighbors whom we invited over for an enchanted look, were thoroughly acquainted with the new Queens, and calling them unerringly by their right names at all times. Never did three cats have such differing personalities, which they established immediately. Catullus is the smallest, and very affectionate; she will climb all over you, a soft little black ball of fluff, and wants to be cuddled. I gave her black twin the Martial moniker, because she is a crazy streaking thing, running races with herself, stalking the others, never holding still. And Pindar the beautiful is at once dignified, cuddly like Catullus, and also active like Martial - a creature of regal balance. 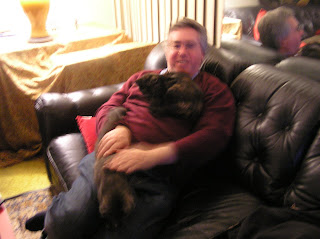 Our lives, of course, have been turned completely upside down; going from zero cats to three in a few hours is transformative, to say the least. These hectic kitties wore us out but didn't subside to cat naps in various chairs until midnight. They're sweet cats though, and well behaved; used their litter boxes first try, ate nicely, and although a little too attracted to my shawls and scarves (which will be put away), they've destroyed nothing. Later, I woke Peter and told him when he got up to be careful. "Oh, the cats," he said. "Are there one or two?" "Well - three actually," I said. He came out to look and was immediately beguiled, grinning ear to ear. We none of us seem to be doing anything but watching cats; certainly life will be interesting in this the Pindaric Era, of which this is Day One. 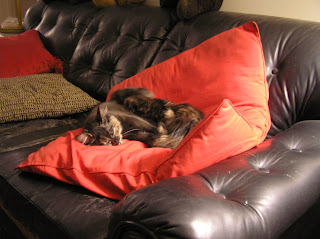 Settling to Sleep
Posted by Diana Birchall at 12:54 AM

The Bengal cat is gorgeous, just so strikingly pretty. You will have to have them spayed even if all three are girls.

It's like having babies -- only they are cat babies.

I think of myself as their grandmother too, and find myself calling Jim "Dad" more when they are around. I never would call him "Dad" and "granddad" does seem too old.

They are cheering but they are also troublesome. They have a narrow range of behaviors stemming from what was probably a single cat whose type pleased so that it was bred over and over again, and then the breeds emerged (like Siamese).
I've thought about them and also the typical photos and one of these days I'm going to write a thoughtful blog on cats even if it will seem laughable to others :)

Happens to us all in the end Diana, cats just have a way of creeping onto blogs in the same way that they creep onto laps as you read.We are fortunate in that we don't live near civilization and virtually no traffic beyond our own and the odd tractor, so our fourteen-year old cats are turfed out at night to revisit their roots and to fend and forage, though we suspect they head for the straw in the woodshed and carry on sleeping. We like to think we don't pamper them but as I type this they are all curled up in front of a gently glowing woodburner in a state of Devon-ly bliss(bit like me really!)

I am happy to read about your cats (despite being a dog owner!), and what great names you have given them.

They are just wonderful, Diana. Although they may be a bit of a handful, I'm glad you got all three. Mrs. Merdle, very much a cat person.

I love your cats. You definitely did the right thing getting that third one! I too have succumbed to putting my cat on my blog. He is a strange character called Timmy, very beautiful but inclined to suddenly bite. I still love him to bits, though.

I love cats but am too allergic to have them anywhere near me. But I'll talk about my rescued dog any day (and wish I had gotten two at once, for my little wee pooch is lonely). These animals add such a special element to one's household. One thinks that one's life is complete before they enter it, and then the next thing you know a gaggle of people are willing to just sit around the living room oooh-ing and awe-ing away. I can see why you felt the need to add these posts to your blog - these kitties are CUTE. Congratulations.

Diana - these are gorgeous gorgeous gorgeous. So glad you have the three. We have always had cats: first two were Butch and Sundance, then we had Tabitha Twitchit, then we had Ginger and Pickles and then we had Darcy and Bingley. When I left my husband I had to leave the cats which upset me more than anything else, and a year or two later when ex remarried, his new Mrs moved in with another two so at one stage they had about five all over the place. That was one of the times when I regretted leaving.....