The Miracle of the Cats and Carbohydrates 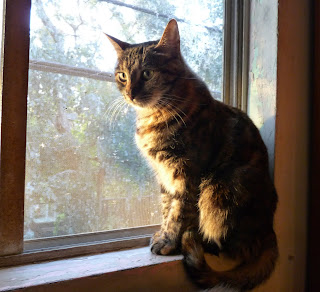 Pindar
The most recent biopsy on Peter's (small and early) prostate cancer showed that it's active enough to need to come out sooner rather than later. He'll have the robotic prostate surgery at Cedars Sinai within the next few weeks, but the scariest factor here is his severe diabetes, which makes him alarmingly prone to infection. So, faced with this prospect, I went into action, and put him on a strict No Carbs diet, ten days ago. Results have been so astonishing that the word "miraculous" would not be an exaggeration. He went from an average glucose level of 250+ (very high) to average 120 (normal) in just a few days. 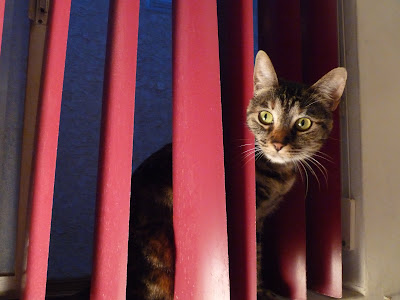 Pindar, whose blood sugar must be similar to a hummingbird's

I had skimmed all those Zone, Atkins, South Beach diet books, and never been able to stand them; have just thrown them across the room or out. Too complicated, too much deprivation; I knew we could not live life constantly balancing and measuring and counting and not enjoying. But since I knew he *must* do low carbs, I got a list of the all low carb foods he could eat, according to stringent first stage Atkins. All the recipes given were horrible, so I made up my own recipes and menus. This took three days of the most intense thinking and planning and researching and studying and experimenting. I did figure it out, however, and out went the bad food from the fridge, and in came a bunch of new things from Trader Joe.

Peter has hardly been able to cut down on the insulin fast enough! I don't know if he'll ever be actually off insulin, but nobody seems to have ever seen or heard of an improvement quite as dramatic as this before. The doctors are literally speechless. Our conversation with the endocrinologist, after only three days of the diet, went like this:

"Who put him on this diet?"
"Me."
"How did you learn it?"
"Not through those impossible books. I made a list of low carb foods he likes and am tailoring recipes using them."
(Doctor's eyes bug out and he says simply:)
"If you can keep this up, Peter's blood sugars should be low enough for surgery within a month. It's in your hands now." 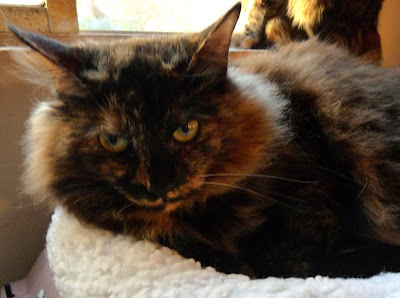 Marshwiggle, who is not on a low carb diet

We really can't express our own amazement, and I must say dear Peter is most touchingly grateful to me, as he knows that this has been a lot of work. We always knew "diet would help," but this? And *which* diet? I only chose this one because two hopelessly obese people I knew had taken up what seemed to me a bizarre and difficult way of eating, in the last year or so, and lost respectively 100 and 50 pounds. I never thought *we* could live like that - or wanted to - but events made it urgently imperative for Peter. So imagine our delight when we found that the eating need not be bizarre or unpleasing! It must be that Peter has some really extremely carb-allergic metabolism. Can he keep this up? Oh yes. Let me show you our menus of the last week:

Italian chicken with tomatoes and cheese, with spaghetti squash

Spaghetti made out of eggplant parmesan, with homemade meatballs

Chicken rolled in Parmesan and baked, with squash fries and baked asparagus

His favorite dessert is a baked custard with pumpkin, cream and cinnamon. I also make delicious muffins with almond meal and pumpkin.

Obviously he still has the surgery ahead (we haven't got a date scheduled yet, but soon), but this should certainly help his prospects.

I haven't photographed any of the food yet because I've been too busy cooking it, so I illustrate this post with cat pictures, as they are always Peter's comforters. We have also pioneered Cats as an antidote for depression, a service they perform most effectively. 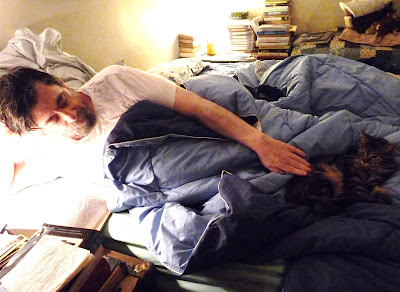 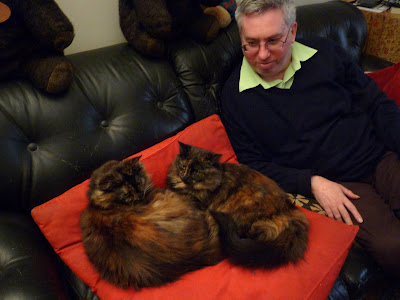 Posted by Diana Birchall at 7:38 PM

Cats are definitely good for depression!

Congrats on the success of the food changes! Yeah for you ;-)

I'm finding the food changes inspiring. Thanks for listing the menus.

I'm so thrilled Peter has had such wonderful results. I wish I could get you to cook for me. :-) Food photos would be great, but who can resist cat photos?

Congratulation on diet success, and the cats are lovely!

(you probably don't remember me, but I used to be on LP and piffle ages ago)

Taelle: No, I don't remember that name, though I'd probably remember if you have a Lord Peter "nom." I'm glad you read my blog though. I'm still on Piffle, though not on LP anymore. Regards - Diana

I do - it's "nice glass of Bass". I mostly live on LJ and saw the link for your blog on Ellen Moody's LJ.

Why, of course I know you as nice glass of Bass: an LP/Piffle stalwart!

Diana
What a fabulous story of your work with diet and blood sugars. Blood Sugar regulation is our biggest health crisis today consequently leading to a myriad of degenerative disease. I'd love to share your story on my website http://www.free-healthy-diet-plans.com as these are the types of fabulous results we in the lower carbohydrate community are witnessing. I have a 55 year old uncle who has suffered a heart attack, stroke and neuropathy due to his diabetes and I was able to pull his blood sugar levels from 600+ to 90. I hope Peter can discontinue his insulin. Many can. I'd also like to recommend to you, Dr. Richard Bernstein a diabetes Doc who has garnered great respect. He began as a diabetic himself, figured out how to properly regulate blood sugar with very little insulin and went to medical school to be taken seriously by the medical community. Fascinating story!
Be well and I thank you for sharing.
Misty

Her “Carb-Pairing” Trick Melted Away 22lbs in Just 13 Days

If you’re upset about your weight and want to lose a little more, get this…

....Without starving herself, she lost a total of 37lbs in the first month!

...Even without exercising, she went on to burn off 84lbs (almost a pound a day) and eliminated any sign of diabetes or any other life-ending diseases.

And the amazing thing is…

All she did was this D.I.Y. “carb-pairing” trick that reconditions your 3 female weight-loss hormones to drastically accelerate fat-burning while still eating the foods you love.

Check it out for yourself…