On Paul's Birthday, a Paean to his Cat - and Creamed Celeriac

Today is Paul's birthday, so his fond mother writes a paean to him and his cat.  Mostly about the cat, as they are One. 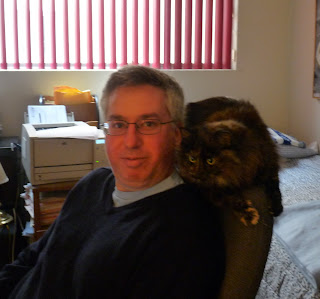 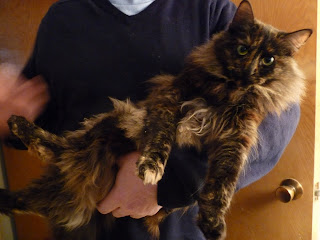 Her fur, the outward and visible sign of an inward and spiritual grace
Catullus is not the most beautiful cat in the world.  She was the runt of the litter when she came to us from the shelter, very unhealthy, seriously underweight with a crooked back and monkey-like features that even a mother couldn't love (she may have looked at her kitten unawares, to paraphrase Jane Austen, when she took off for points unknown).   Frankly, poor Catullus only got adopted because I ended up taking home the whole family of three.  I remember thinking, "Well, that one isn't even a pretty kitten, but she's long-haired, so maybe she'll look better when she's full grown." 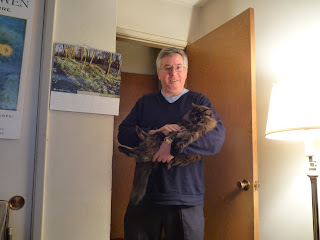 A man and his cat
Peter instantly fell in love with Pindar, the fast-moving, authoritative, coruscatingly intelligent, graceful little Alpha, who is a bit of a bitch - well, he wouldn't let me say that; but even he would concede that she is, as Paul says, charming to those above her, while bullying those below.  But even that's too harsh; she is simply the Alpha, who patrols the whole house, looking out with responsibility, love and concern for all family members, cat and human.  She has, in short, a lot in common with me, hence Peter's attraction for her, and vice versa.
I fell in love with Martial the Epigrammatist, cat of few words, also known as Marshwiggle.  She is the most Birchallian cat, shaggy, wayward, greedy, cowardly, bohemian, gentle, and infinitely cuddly and loveable.  You haven't lived until you have held and cuddled this fat cat.  She is the most like Peter in looks (alas, she hasn't his brains).  So she is my cat.
The Lord only knows what psychologically murky underpinnings made Paul gravitate so irrevocably toward the small, the bullied, the crooked, the runty Catullus.  She was needy, always latching on to people and even trying to suckle on Pindar, who endured it patiently.  I found this distasteful, but Paul simply saw she needed affection, and gave it to her.  He cared for her tenderly, played her favorite mouse-on-a-string games, and allowed her the run of his house.  She is now his bondswoman and liege, possessed of a boundless, wordless devotion for him (well, sometimes she does emit her characteristic little squeak:  "Kek"). 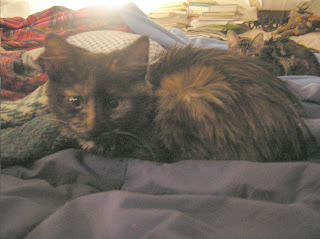 Catullus as a sadly runty kitten
And true enough, she has flourished and become quite a handsome cat.  Her fur is the best, most luxurious, silkiest, and most parti-colored in the house, swirling lashings of soft black and red.  Indeed, this lavish fur might be said to be the outward and visible sign of an inner grace, for there is no doubt that Catullus has the most beautiful character of the cats, gentle and loving:  an innocent.  Brainy she is not, and one of her names is "Garbage Eater," for her louche passion for chewing styrofoam; but she is entirely Paul's cat, and if she knew it was his birthday, she would doubtless make him a present of a dead moth. 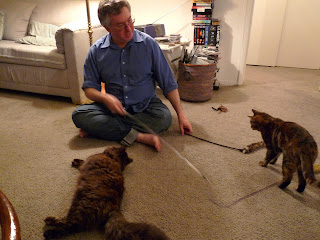 ...And he has The Patience to Play with Cats (I have it not)
Happy Birthday, Paul!  Fortysomething years ago my room at Lenox Hill Hospital in Manhattan was filled with lilacs, as an eighteen-year-old mother looked into the one-sixteenth Chinese blue eyes of her baby son...(bla bla bla, mom goes into sentimental peroration, as she does every year...)

I plan to include a Low-Carb Recipe with every post, which should be easy since we are trying new dishes almost every day.  Last night I made baked pork spareribs, and when they were getting their final browning under the broiler, I put half-a-dozen split baby bok choys under the broiler too, in a shallow pan in which they'd been tossed with soy sauce, apple wine vinegar, ginger and garlic.  Broiled baby bok choy (stirred once while broiling) turned out to be sensational when served in tandem with creamed celeriac!

Most people in the U.S. don't know about creamed celeriac.  We learned about it when staying at an exquisite small castle hotel in Scotland, Glenfeochan House near Oban (sadly now defunct). 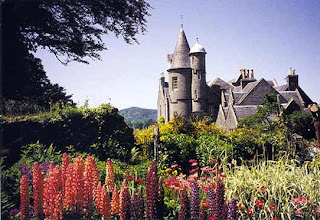 The owner's wife was a Cordon Bleu chef and told me how to make this delicious stuff as they (presumably) do in France.  Celeriac is just ugly celery root, which they now always have in Los Angeles supermarkets.  You chop off the gnarly outer skin with a knife, discard, and then cut up the white root in pieces, as if you were going to make creamy mashed potatoes.  You boil the celeriac until it's soft when pierced with a fork.  Drain, and then I put it in my Osterizer blender with a big lump of butter (lots!  2-3 Tb. for one root), some cream (or half & half), salt and pepper, and then cream the lot.  It comes out like creamy mashed potatoes but with a subtle, sophisticated taste - and is a very healthy, low carb vegetable.  Having celeriac and bok choy with our spareribs, we didn't miss potatoes at all! 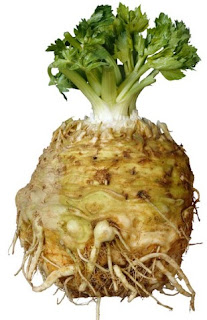 Posted by Diana Birchall at 5:01 AM

Sounds like a fabulous meal. I love creamed celeriac, though I hate wrestling with that gnarly outer skin.

Happy birthday to Paul and good wishes to Catullus who is indeed a most beautiful cat now.

Happy birthday to Paul. I don't know if it's low carbohydrates but Jim made us delicious cauliflower tonight. He puts it in the oven to bake with grated cheese on it. Yummy with Riesling wine.

It's hard to resist cats. After reading Goodall's book on chimps, a number of my students wrote seriously about their pets this semester, and I discover it's not that uncommon to have three.