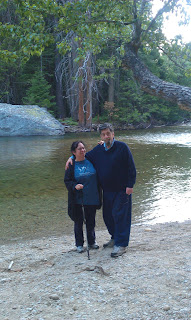 Me and Peter in King's Canyon

It's been a long time since we took a road trip, all three of us together, because usually one of us has to stay home with the cats.  But this time we left them in the good care of neighbors Pam and Richard for a few days and took off to one of our favorite places, Cedar Grove Lodge in King's Canyon National Park, which is the northern part of Sequoia National ﻿Park. 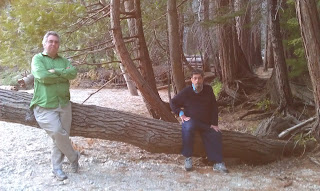 Peter and Paul by the river

Just before Memorial Day is a great time to go, for the crowds haven't arrived yet - and King's Canyon never gets the traffic of the more well known parks like Yosemite.  Perfect weather, but it's been an extremely dry year in the Sierras, so the King's River that flows through the canyon wasn't raging as it normally would be now, but was rather low.  They're predicting a bad fire season. 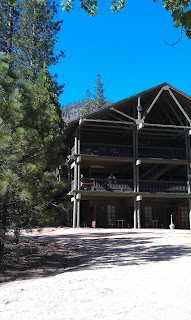 Cedar Grove is a modest, inexpensive lodge, unchanged in any detail for many years, and that's why we like it.  We used to go to Sequoia all the time - usually every month or so - until they tore down the 1930s cabins ostensibly to protect the sequoia trees, and built a monster modern lodge, Wuksachi, instead.  It's not near the sequoias but is a sterile unatmospheric structure that could be anywhere.  So we quit staying in Sequoia, and when we need our escape from Los Angeles into primeval wilderness, we now choose the area around Mammoth in the Eastern Sierras, or King's Canyon. 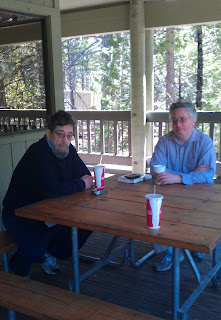 Peter and Paul at our favorite spot on the porch. 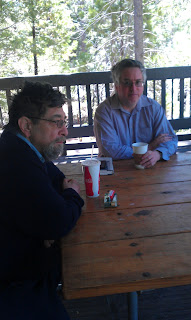 The great thing about Cedar Grove is the unchanging peacefulness.  You sit on the porch, with the river rushing by, smell the incense cedars and fragrant fresh air, and are visited by Stellar's Blue Jays.  The snack bar is sort of minimal and not cheap (the rooms are inexpensive, though), but you can get an eggy breakfast and a steak or some grilled trout for dinner. Then we went for walks in the forest by the river, which is as soul restorative as anybody could wish.  We didn't see any bears this time, but plenty of deer.  King's Canyon can be hot in summer, as it's in the bottom of a canyon at only 4,000 feet, but in May it was perfect.
﻿

With a river behind me 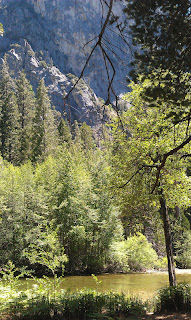 On our last day we drove through Sequoia and had a hike on our old favorite Sugar Pine Trail.  To my surprise, the knee that's so dysfunctional in the city (from post-ballet injury arthritis), ran up and down the trail like a rabbit's joint.  Possible explanations could be 1) endorphins from hiking 2) dirt trails being much easier on the knee than city pavements, and 3) my hiking stride, from the hips, doesn't bend the knees much.  Whatever the reason, it was a double adrenaline joy to realize that I can actually still hike as well as ever! 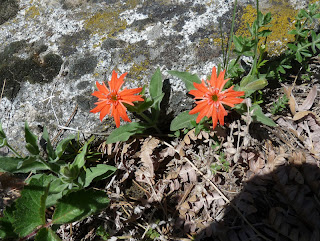 Indian pinks in Sequoia on the Sugar Pine Trail

On the drive home, we finally gave in to some modern technology and figured out how to use the GPS on Paul's Android, and to very good purpose.  We were wanting to stop for a Basque dinner in Bakersfield, which although an uninspiring Central Valley city, has a Basque community famous for its restaurants.  But we didn't know the names of any, or which were good.  So (since it's a long drive with nothing to do) Paul read out all the restaurant reviews, we picked one, and laughed like savages seeing their first Coke bottle while the GPS lady voice instructed us how to get there.  The Wool Growers proved to be one of the oldest and most famous, and we had a thumping good dinner of hearty bean soup, lovely Frenchy salad, sheep tongues, oxtail, and other hearty delicacies. 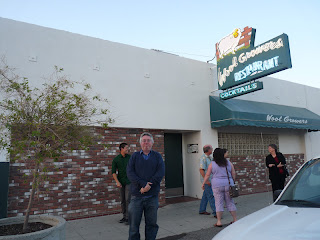 Paul at the Wool Growers Basque restaurant
﻿
﻿
Posted by Diana Birchall at 4:03 PM

It is good to see Paul looking so well! You are responsible for a lot of his improvement and I hope you are proud of yourself!

I am sorry to hear about the old cabins in Sequoia. We have not been there for years but when I was a child we visited often and I always enjoyed the way the old buildings fit into the landscape. Everything that is done to ugly up the world is for the "protection" of something or other -- we are told. But they are still ugly.

I have noted the name of the hotel and the restaurant for future reference!