Here is my semi-annual report on my Salvation Army, eBay and thrift shop finds.  Intervention not quite necessary yet (in my opinion; perhaps not in yours).  There's nothing on our beds but cats, and nothing on our chairs but books.  When the piles of Victorian Chinoiserie become threatening, then you can call Dr. Zasio from the Hoarders TV show. 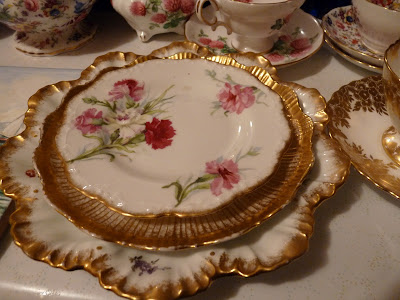 Limoges plates
I thought it would be fun to arrange this blog post in order of my top ten finds of the year. Of course there are more than ten...but these are the best! Oddly enough, there are no duds. (Another thing you may disagree on, as one person's treasure is another's trash.) Herewith, the List: 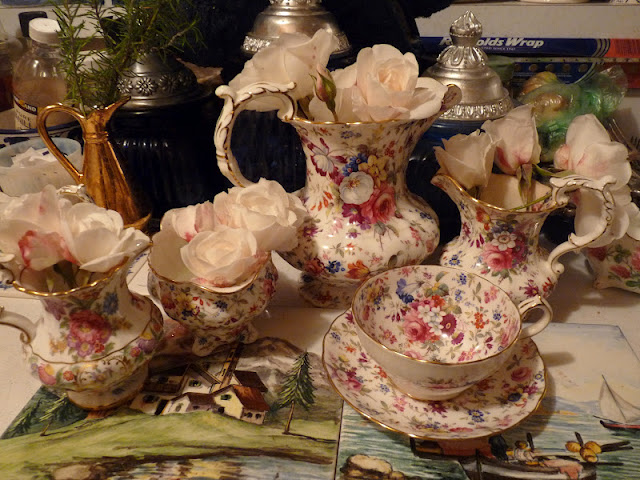 All right, that's at least two items.  But if we're going to make this top ten thing work efficiently, I'll have to stuff them in.  Also, I can't decide which I love most, my flowery chintz Hammersley pieces, or my beautiful hand-painted Italian tiles.  Certainly, the lot together makes our pathetic closet of a 1960s kitchenette look Paradisal to me. 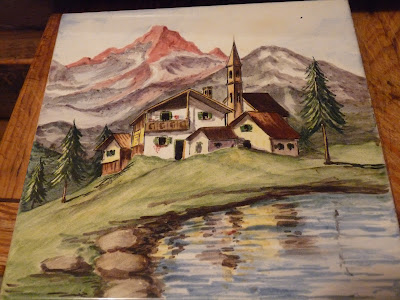 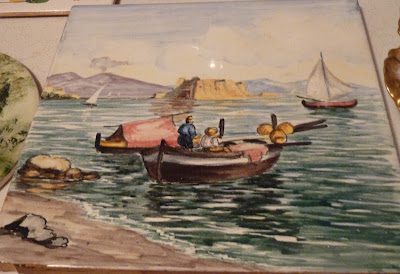 Got these on eBay, from a man in Pennsylvania who brought them back from Naples in the 1970s.  The two together were $15.  Below, a Delft tile, after the Gerard Dou painting, of an old woman reading, and a hand painted Wheeling tile from the 1950s. 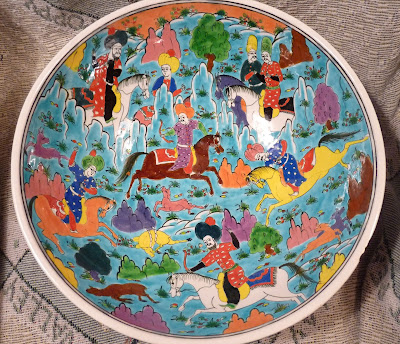 But as long as we're looking at large plates, I also love this one from Portugal (another Sally Ann find), and that also gives me a chance to show a pair of dear little Murano glass red birds. 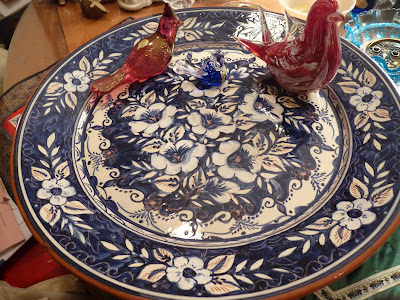 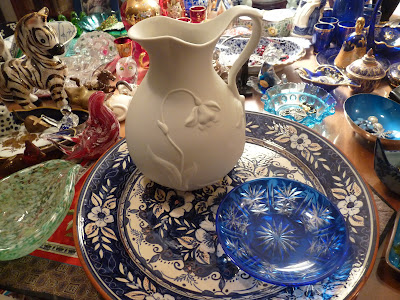 And here's the plate with a piece of Parian ware on it.  Do you know Parian ware?  I first read of it in Little Women, when Laurie gave a piece to Meg for her wedding:  "I don't think the Parian Psyche Laurie gave lost any of its beauty because John put up the bracket it stood upon."  This reproduction is from the Met, and the price at Sally Ann was about a tenth of retail at the Met.

One more plate.  A Bavarian pretty, which is now home to several of my little animals. 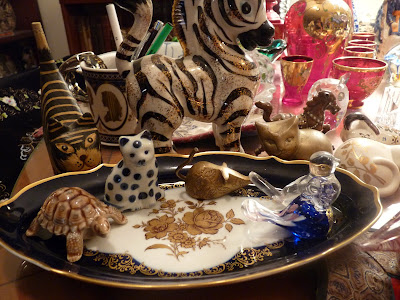 And that brings us to: 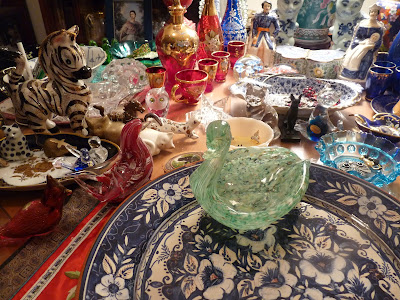 Moving on to another category...Boxes! 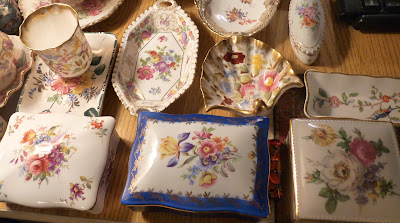 (Paraphrasing Pete Seeger)  Little boxes, on a desktop, little boxes made of porcelain. There's a pink one (lots of pink ones) and a green one and a yellow one.  And they're all made out of porcelain, and Paul thinks they all look just the same. 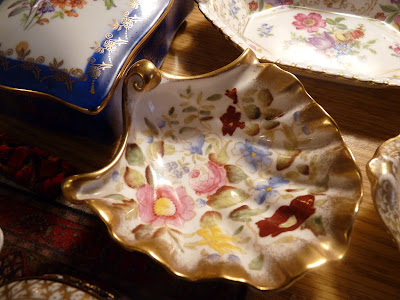 Now, just one more box for you.  The square box on the right is new. It's from India, and is made out of hundreds of cut-up pieces of bangle bracelets!   A very intricately made, sturdy little jewelry box.   $10 at Salvation Army... 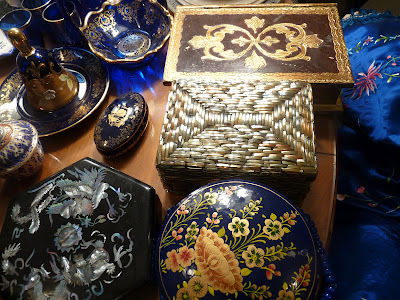 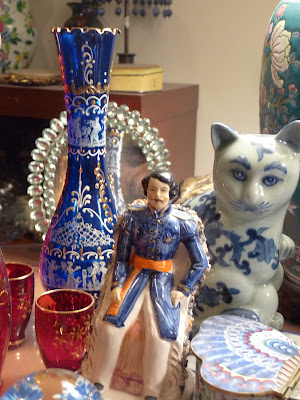 Too wonderful. Cobalt blue Venetian glass with Bacchus scenes hand painted all over it!  And I'm pleased with its surreal setting, with Prince Albert and the naif Japanese cat.

6.  An Interval for Cats 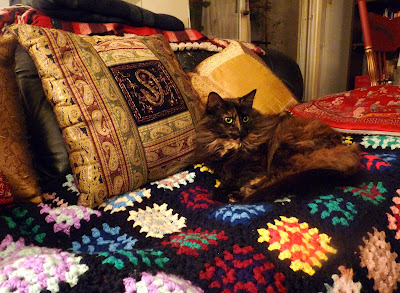 All the cats love this old-fashioned afghan which I bought on Etsy, but it is most peculiarly Tully's.  She looks like butter wouldn't melt in her mouth, or she wouldn't piss on my shoes, which she most certainly has done.  She has expressed her opinion more than once upon a pair of bright yellow Michael Kors loafers.  (I'm afraid she's right actually.  A cat of good taste, if poor manners.) 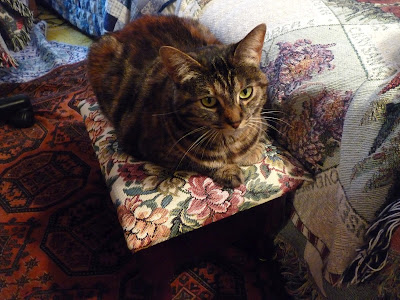 Sorry no pictures of Marshy this time.  She is not a materialistic cat. 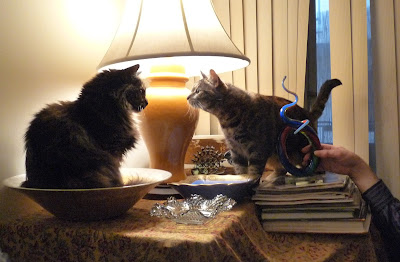 People are always asking, "Don't the cats break things?"  Amazingly, no.  Pindy in particular loves to tiptoe across that tinkling sea of flowered china on my computer table, and she places her little paws just so, with extreme delicacy, sometimes inside a dish, sometimes between.  Never breaks anything.  However, when they do break something it's spectacular - like the time Pindy and Marshy flew over Paul's living room with one bound for leverage on the coffee table, and their dual bellyflop strike took out five prized Venetian glass goblets like so many bowling pins.

Let's get this out of the way.  Here is my solution to keeping all the teacups off our tiny kitchen counter or higher in shelves than I can reach: 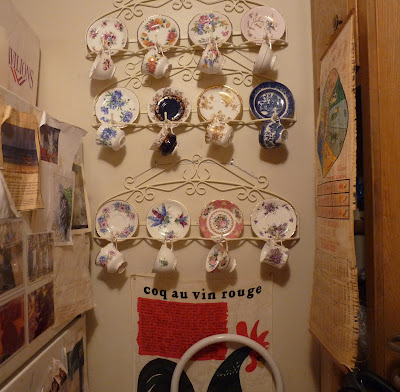 And here are some pretties. 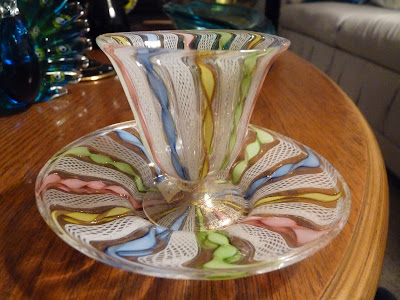 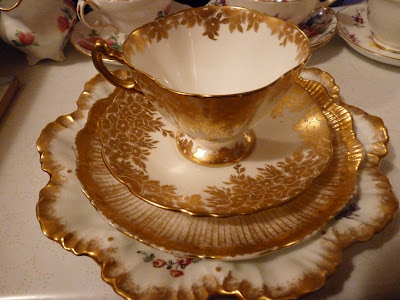 The most golden one of all.

Antique Hammersley, sitting on top of the Limoges plates.

8.  A little bouquet of Carnival glass 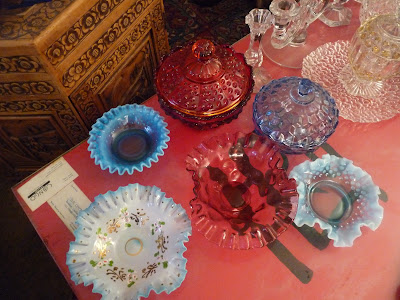 9.  Starting to move on to the end quickly...Small French Limoges plates. 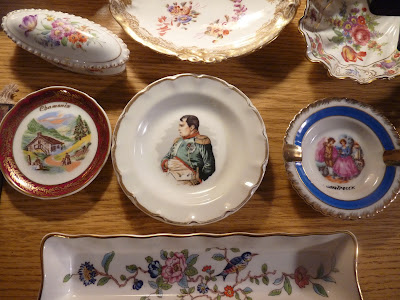 The pictures are Chamonix, Napoleon and Montreaux respectively.

And speaking of small collections, here are my Eggs: 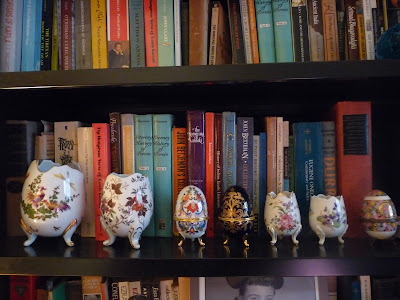 I can sense you calling Dr. Zasio.  Hoarders!  Well, I'm almost done, so before she gets here...

Oh, dear, Marshy (Martial the Epigrammatist Marsh-wiggle Marshmallow) is feeling left out.  She is far more beautiful than a gaudy glass peacock, so I will close with a picture of her instead.  As I said, her sin (if cats can sin, which I doubt) is not Materialism but, alas, Gluttony... 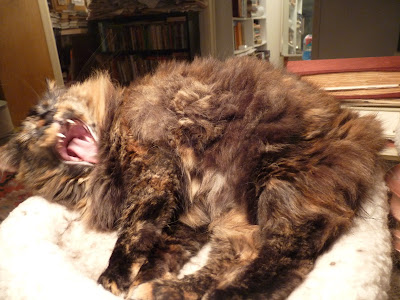 Here she is saying what she thinks of me going on about all these thrift shop baubles, instead of keeping to the proper topic, which is Cats.

Posted by Diana Birchall at 3:38 AM

I LOVE the peacock! All the other items are lovely as well, and I can sense the satisfaction and peace they give to your soul. The sign of a hoarder is that their "stuff" brings them no peace, but only anxiety. Your cats keep your balance in perspective, I'm sure. Breaking things only occasionally to remind you of what really matters. :) Lee

A top ten post for me, Diana! I love the idea of having 8 items at number one (and I'm allowing you cup and saucer as a single item!) and especially love the Austrian tile. I see you succombed to the Dou. Lucky Tully on the crochet cover - good too that Etsy get support. We have Folksy here - it's just the same and often a first port of call for cards and special gifts. The Venetian Latticino took my breath away and the dancing eggs are a hoot. How dull you would find my home!

Lee and Barbara, thank you both for your warm comments. They were so pleasant to read, after spending time putting pictures together, etc. Lee, your analysis is spot on...these things are somehow very soothing, and just what I seem to need at this stage of my life! And Barbara, I'm so pleased you liked my cock-eyed blog! I could never find your home dull, because you would be in it (plus a certain amount of books).

Diana, sometime when you are in the UK please pay me a visit and I will take you to my favourite auctions and car boot sales and help you search out new treasures. As I was walking round our local car boot at eight o'clock this morning, I was looking at the stalls with your eyes, as I imagined, and seeing all sorts of new treasures. Also, I need someone who can truly appreciate my collection of nineteen pressed-glass cakestands, the Moroccan plates from Fes and Meknes, the egyptian soda glass vases, and all the other goodies I love to find but that this household of five males fails to understand at all. One porcelain jelly mould is a lovely thing, they acknowledge, and both apposite and effective for flowers in the middle of the kitchen table. But they do question why I need five of them. Your collection is a delight and I can imagine exactly how much pleasure the hunt has given you. My favourite is definitely the Laticchino (sp?) . What a wonder of the glassblower's art.

ps I love the idea of a finds top ten - I'm starting to do that straightaway for next year.

What a fun post. I always love seeing your treasures.