﻿
For the fun and honor of the thing, I'm taking part in a game started by author Debbie Brown of the English Historical Fiction Authors Blog.  (I'm sorry I can't link to the site; any kind reader want to teach me how to link, I'd be grateful!)

The game is called "Meet My Main Character," and writers around the world are answering a series of questions about the main character of their work in progress. They then post these to their blogs, and tag others to follow. So, now here's me answering the questions. 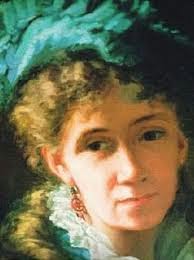 1) What is the name of your character? Is she fictional or a historic person?

Well, yes and no!  For she is Jo March, of Little Women fame, who was her real life originator Louisa May Alcott's alter ego.  If not precisely an historical figure, Jo Marsh is a fictional character who has taken on a unique and timeless reality.

2) When and where is the story set?

Ah, there's the rub.  The story takes place around 1907.  Jo March, who was 15 years old at the start of Little Women, during the Civil War, will, I hypothesize, be about sixty years old at the time of my novel.  For many years, of course, she  has been "Mrs. Jo" Bhaer.

3) What should we know about her?

I am assuming that my readers know pretty much everything about Jo.  I could have done it two ways:  write a novel about a sixtysomething Jo for people who don't necessarily have any clear memory of Little Women (or may never have even read it), or a literal imagining, for those who not only know and love the world of Little Women but are probably also acquainted with its sequels, Little Men and Jo's Boys.

4) What is the main conflict? What messes up her life?

What messes up Jo's life is, in truth, a very sad event. Being in her sixties, and married to a much older man, it is natural that in the course of time she would become a widow.  And so, yes readers, I had to kill off dear old Professor Bhaer.  The book opens with Fritz's death, and with Jo facing a new life alone.

5) What is the personal goal of the character?

Always active, eager, imaginative, original, on fire to help others and to throw herself into causes, it is inevitable that "Mrs. Jo" would take a great interest in women's suffrage, as Louisa May Alcott herself did.  And 1907/8 was the height of the dramatic suffragist movement in England.  So Jo, soon after being widowed, travels to England with her two nieces, and joins the movement - as a suffragette, marching, organizing, writing, and speaking alongside the likes of the Pankhursts. Jo's goal is to help women: and in doing so, she also helps herself.

As an older heroine may not be exciting to many readers, we also have the adventures of Jo's two nieces.  Josie, whom Alcott aficionados will remember as the theatre-mad teenager from Jo's Boys, is now a famous and dedicated stage actress in her 30s, who travels to England on a theatrical tour, at the same time as her aunt's suffragette mission.  Will she find the kind of success, and love, she hopes for?  The third heroine (for my "Meet My Main Character" is a triumverate!), is young Lulu, based on the real-life daughter of Louisa May Alcott's sister May ("Amy" in Little Women), whom Alcott adopted after May's death.  Lulu and her father Laurie are also in the traveling party, and Lulu embarks on some bluestocking adventures at Cambridge.  As for Laurie - well, you'll have to read it and see.  But I can tell you he's pretty worried about his older daughter, beautiful Bess, who is part of a very louche, bohemian, artistic Paris set, that includes Colette and Proust... 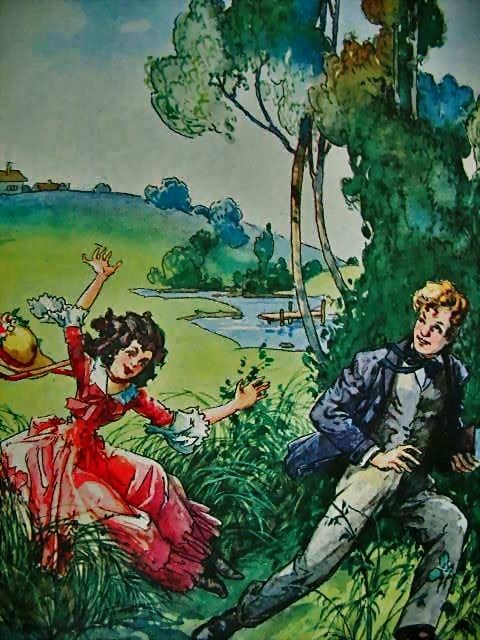 Young actress Josie in an illustration from Jo's Boys
﻿ 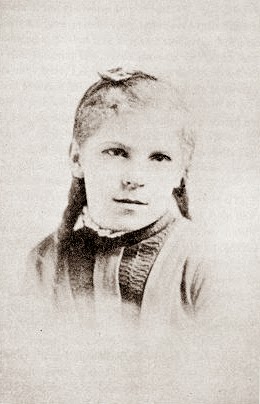 6) Is there a working title for this novel, and can we read more about it?

It is called Jo on the March.  A short excerpt is at the bottom of this post.

7) When can we expect the book to be published?

As soon as I can find a publisher!  Suggestions are very welcome.  I'm not sure if it should have a Young Adult publisher, for not many modern young readers are likely to have the requisite knowledge of Alcott's background and characters. A literary publisher who thinks a Little Women sequel might find some interested readers and fans, is what I seek. 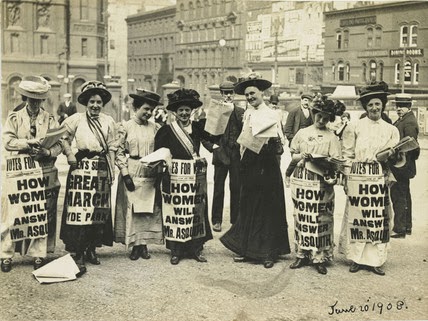 The 1908 Suffragette march that Jo goes on

Thank you for reading!  The author I've tagged who will publish her answers to "The Questions" on (or soon after) 15th April is:  Lyndsy Spence, author of The Mitford Girls Guide to Life.  Damn, sorry I can't link to her either.  Will somebody PLEASE come and help technically challenged author already?!

I can't even make a link to an excerpt, but must copy it entire.  Here it is:

At Sea
Aboard the Mauretania.


Here we are, my dear Meg, writing Ship’s Letters. We will do a good old-fashioned Round Robin, so be sure to circulate to all at home.
I confess to having a little weep when we left; and another when your Demi bid us farewell at the dock in New York and we saw the last of the dear family faces. It is so hard to part, when who knows what dangers may come between us; but we are off to the Old World, which will be new in Lulu’s eyes, at least. Josie and I, old hands, have no romance about the discomforts and inconveniences of life aboard ship, and we are thankful to have such a gallant gentleman as Teddy to play escort.
We are snugly set up in our stateroom. Snug as in small, for we women unanimously insisted that Teddy must not be allowed to pay for us to have a first class cabin; he did try, but we were too many for him, and he was properly foiled. So here we are installed, all ship-shape, in our neat little second class cabin, with four rather cramped bunk beds bolted to the floor. Lulu takes the upper, I the lower, and Josie has the other lower one, while the upper is taken by a little governess, Miss Marks, who is going out with an American family, the Parchers. We don’t know them, the father is a New York merchant, rather vulgar I fancy, judging by the demands they make upon our cabin mate; and they are all installed in first class, even the children. Miss Marks is a shy, quiet little person, and will be on the upper deck with her charges much of the time, so she is no encumbrance, poor thing, and we are quite by ourselves most of the time.
Not that we can expect to see Lulu in our stateroom very often; that child is all over the ship, poking her nose into everything, and I have had to remonstrate with her more than once. It is tiresome to have to play governess myself, at my age, but Teddy assures me that it will do her no harm to explore the ship to her heart’s content, and Josie looks out for her too, so with three pairs of eagle eyes upon her, our little eaglet can’t get into much mischief. Propriety is not what it used to be, in the year of our Lord 1908, not at all the same system that we knew under our dear Marmee. Lulu is an advanced young woman of the twentieth century and is quite as capable of climbing the riggings as of buttonholing the captain with questions. I hope we have not undertaken too much in bringing the child to England. I do know the gracious chaperonage Amy would have wished for her is alas beyond our united power to provide, and I only hope we can keep her from getting into outright scrapes from one moment to the next!
It is our third day out; I was a trifle unwell yesterday, but have my sea legs now, and am sitting in my own deck chair, books around me, sipping broth and nibbling biscuits like a squirrel. The food aboard ship is as usual far too abundant: dinners with endless courses, squab and forced meats and creations of angelica and fallals all set out in the most ostentatiously grand wood-panelled dining room. There is no end of dressing up for dinner, and that I find more trying than the motion of the ship, so for the most part I am contenting myself with apples and bread and milk. That is the diet for shipboard, and I have advised Lulu not to stuff, though it is like talking to the wind, and she is too old for me to forbid her sweeties. At any rate, being at sea seems to suit her as well as Josie and they are both in fine fettle. None of us are the worse for some slight pitching during the night, and Teddy is in capital form: he is in the saloon now, smoking a cigar, I am sorry to say, but I do believe the sea breezes are breathing new life into him, and he is quite brisk. We are to have a regular old-folks promenade on deck shortly. So do not worry about us, dear Meg. I hope all is well back at home, that Nat is doing better, and that Daisy is not too much distressed about him.


Your loving old salt of a sister, 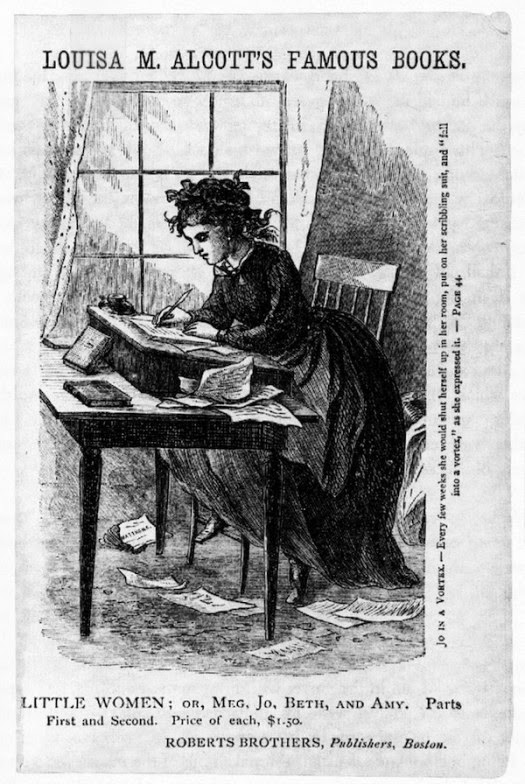 Oh, I love this letter so much! And I'm very interested in the suffragette movement. I will definitely love to read this book when it's out. Jo has always been my favourite and it's an interesting version with her being in her sixties. Good luck!

Thank you, Farida! I loved your post too - it was magical. What a range of authors are participating in this "game," isn't it astonishing!

Oh, my gosh, I want to read the rest of your Jo story. If you can't find a publisher, please self-publish on Amazon! I have a friend who has done so and while he is not making a fortune, many people are finding his stories enjoyable.

Thanks, Linda, I will definitely do that if I can't find another avenue. Publishing on Amazon is a very good way to get a book out there, I know - and I will!

I desperately want to read this manuscript! If you find yourself thinking about self-publishing - don't. Try small publishers first.

If you want a beta - please don't hesitant to email it to me. Hands down, Alcott if my favorite author. Portraying Jo and the revolutionary fits her perfectly.

intense beauty..Love your blog it is great