An English Summer: Day Eight: Virginia Woolf and the Supermoon 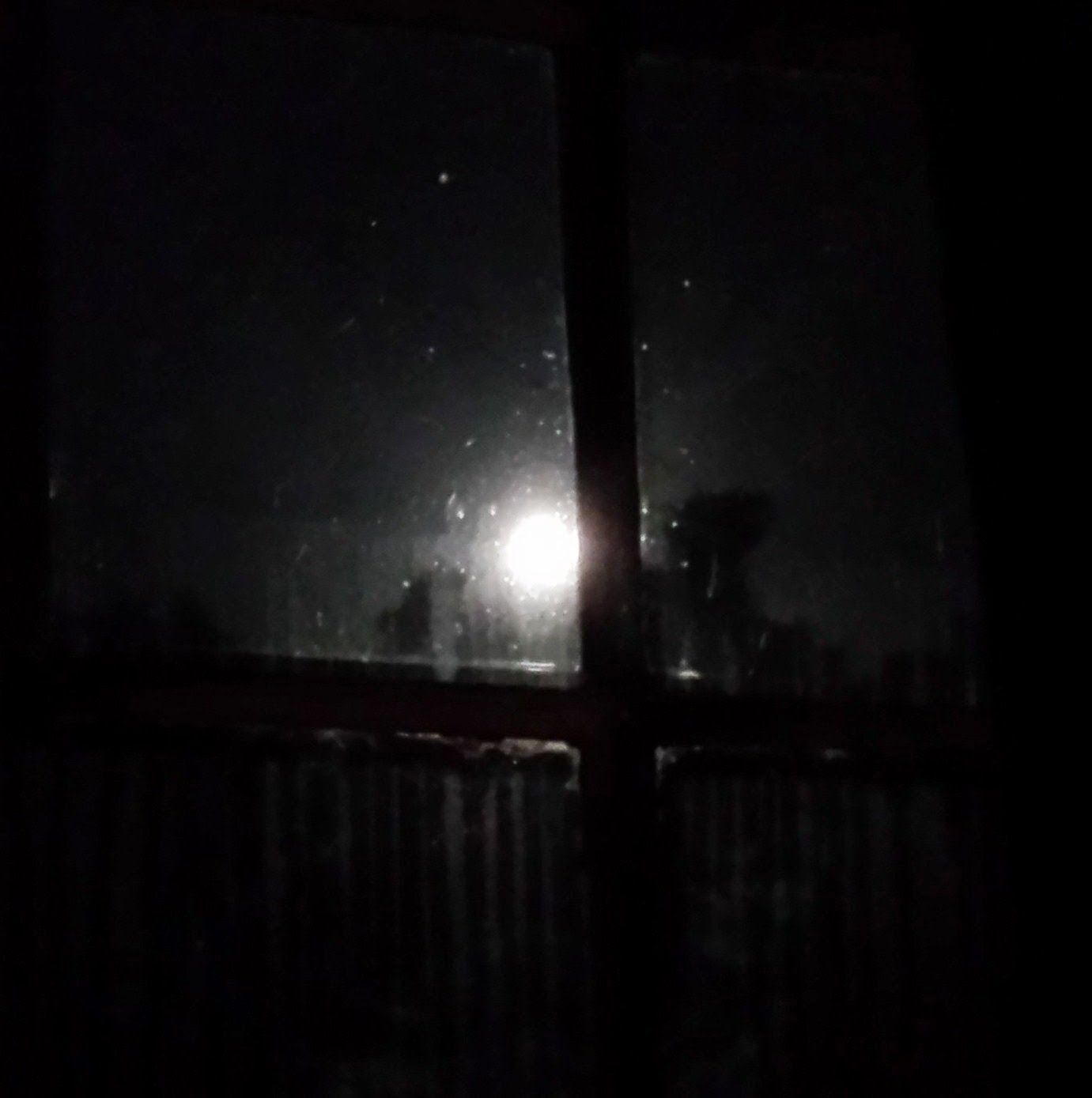 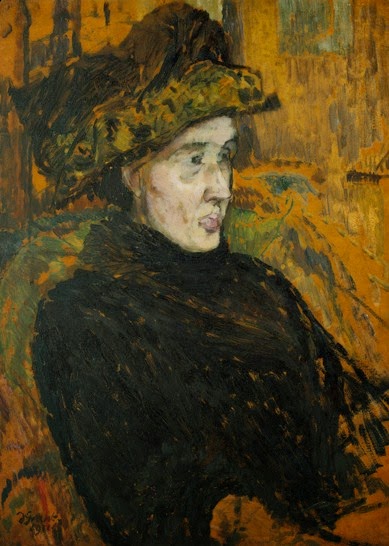 Didn't sleep very well as I was wakened by the Supermoon at 3:20 AM! Its rays were like a floodlight, so bright you could read by it. And then I didn't really get back to sleep, more than a little doze. After some breakfast tea Derek drove Jan and I to the Cambridge rail station and we took the train to London. The object was to see the Virginia Woolf exhibition at the National Portrait Gallery and we were not disappointed.  Curated by Frances Spalding, the exhibit will be on until October 26. Here are details:

The exhibit opens with pictures of Virginia's and Leonard's house in Tavistock Square, bombed during the war. Then it moves to the beginning of her life, to Julia Margaret Cameron's photographs of her family and people who visited her parents. There's a "Hyde Park Gate News" that the children did, that's touching. A picture of Virginia at thirteen, in mourning for her mother; she looks shell shocked. A year later she had her first breakdown, and on display is her older half-sister Stella's appointment diary, detailing doctor's appointments for Virginia. 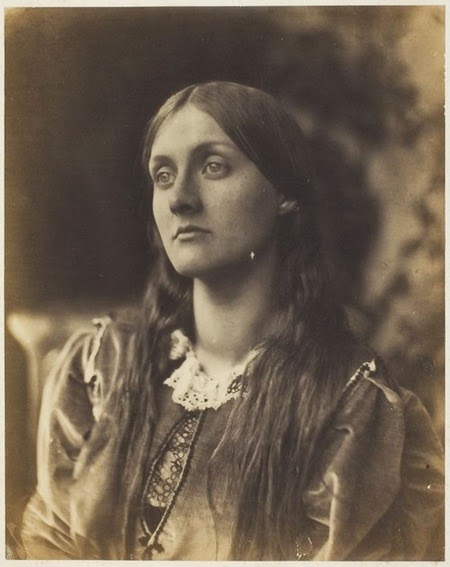 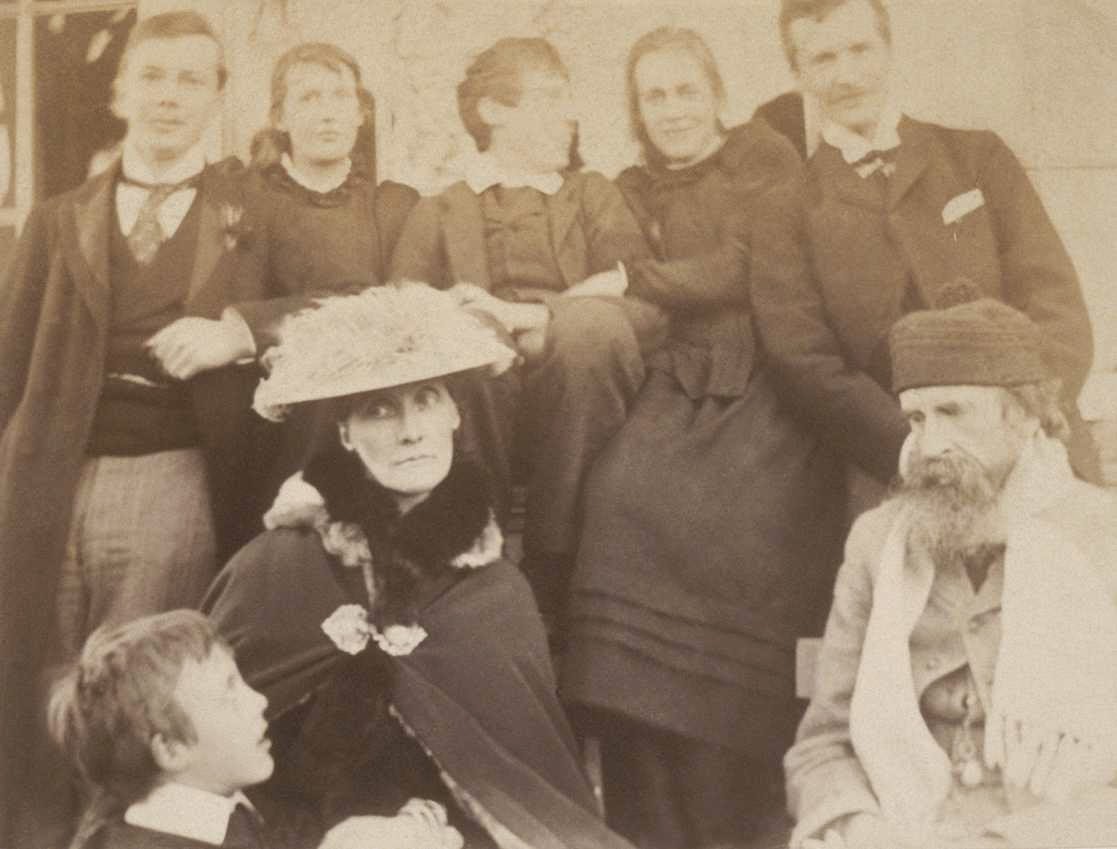 Julia Stephen shortly before she died, with her children 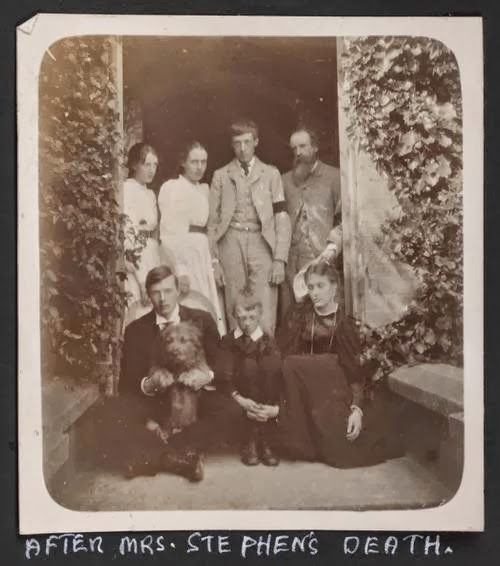 
This is a biography told in pictures, and brief but illuminating text, that illustrates the pictures, explaining what you're seeing and bringing it to life. A picture of Virginia's mother with her last child Adrian makes it plain why she did not survive: the beautiful woman of the earlier portraits is now prematurely aged and totally worn out. A photograph of the amalgamated family, Duckworths and Stephens, shows who everyone is and gives food for imagining how they stood in relation to each other. There's one of George Duckworth with the teenage Virginia who looks anxious and hunted (he was supposed to have molested her). Then one of Virginia's great-aunt Sarah Princeps and her husband Thoby Princeps shows more relations - as Sarah, Virginia's grandmother Maria, and Julia Cameron were sisters. 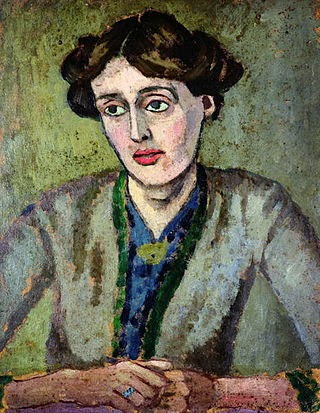 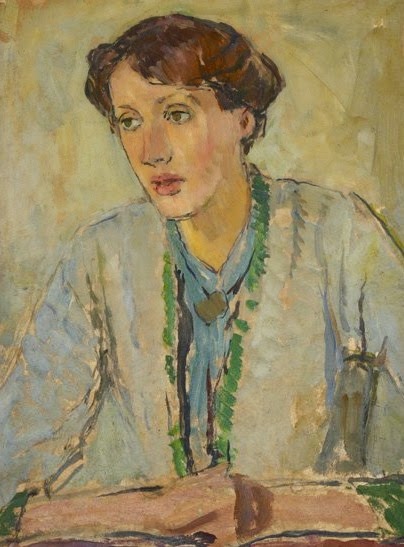 Virginia by Vanessa
﻿
There's an early picture of Vanessa painting, with Virginia and her brothers watching in the background. Then we see an early example of Virginia's talent: the narrative shows how Virginia's Aunt Caroline suggested to her father Leslie Stephen's biographer that Virginia's memoir of her father be incorporated in the manuscript, and there it is, evidently Virginia's first piece of published writing. 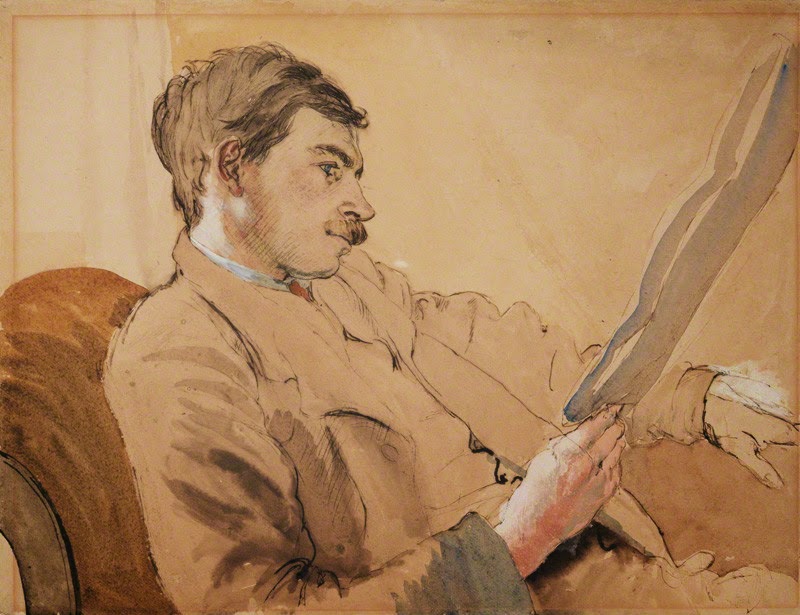 John Maynard Keynes by Gwen Raverat
﻿
The exhibit incorporates to advantage many Bloomsbury portraits in addition to photographs and manuscripts, illustrations and first editions.  I especially liked Gwen Raverat's drawing of Keynes (1908), and was also taken with a portrait of Lytton Strachey by Simon Bussy (his brother-in-law, 1904), while he was working on his Cambridge Fellowship on Warren Hastings (of all people).
There are the letters showing that Strachey advised Leonard Woolf to marry Virginia. "You would be great enough, and you'd have the advantage of physical desire. I was in terror lest she should kiss me," he wrote, having proposed to Virginia himself and been accepted, then realizing it was wrong. 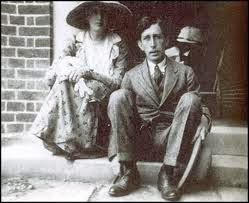 More portraits - Duncan Grant by James Strachey; Roger Fry by Vanessa; Virginia by Fry. "The Conversation" by Vanessa, an interesting painting of three lumps of women. Then a letter (1921) by Virginia about Rose Macauley: "we had Rose Macauley here the other night. Rather a harm-sacrum woman, very modest, or incredibly benighted." Since my reading group is reading Rose Macauley, I took note. 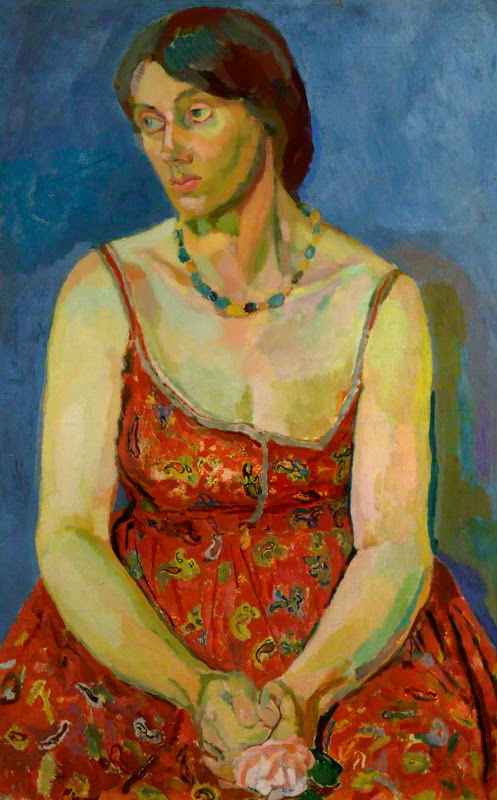 The Hope Mirrlees portrait by Simon Bussy was accompanied by Virginia's comment, "Her stockings matched a wreath in her hair...her scent was such we had to sit in the garden." Only later did I connect Mirrlees as the author of Lud-in-the-Mist.

Then a passionate letter of Virginia to Vita Sackville-West: "My darling - I do love every part of you from heel to hair." 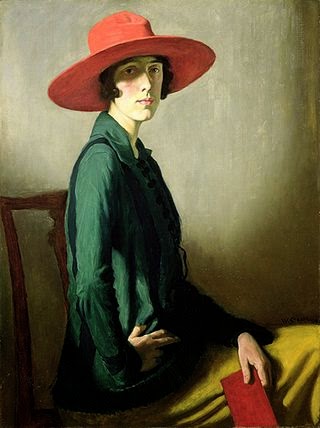 Vita Sackville-West
﻿
A diverting slide show of pictures from Ottoline Morrell's albums at Garsington, shows Virginia in various social groupings, appearing at her ease. Also some Vogue photographs of her, very studied and arranged, with descriptions of her style of dress (pro and con). 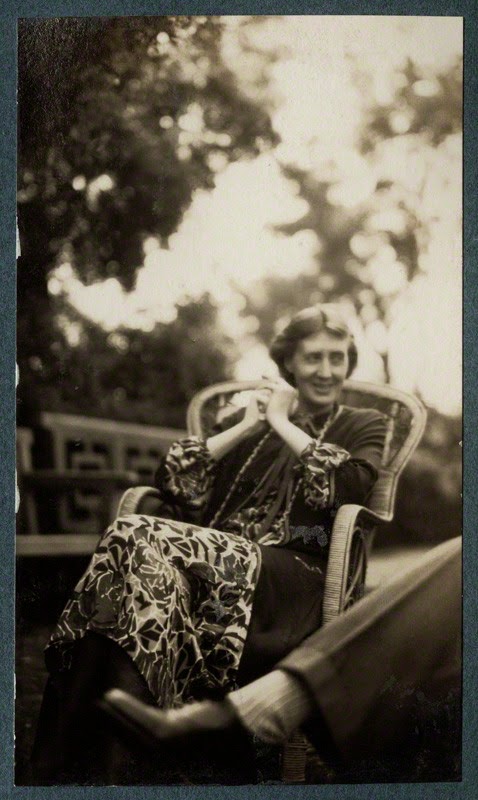 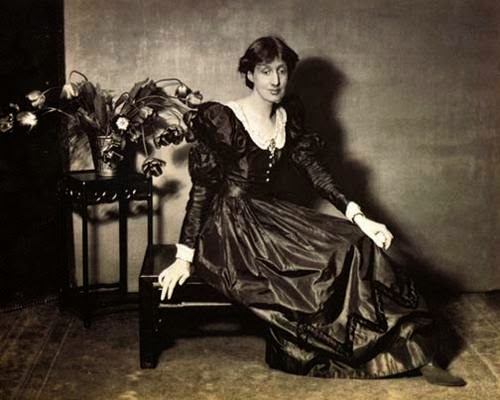 There's a portrait of Vanessa by Fry, intended for her son Julian to take to China on a post, but he died in the Spanish Civil War, and Vanessa broke down afterwards...

Also a photograph of Freud, who visited Virginia and Leonard in 1938, but had trouble speaking because of throat cancer. He gave Virginia a narcissus.

A painting of Desmond McCarthy by Grant: the text calls him a literary critic who did not fulfill his promise, only in conversation, which Virginia describes as "babbling like a nightingale."


We had meant to have tea at the Ritz but apparently you need reservations ages in advance, and who really requires a tea that's £50 per person. So instead we had a light lunch (crab salad) in the restaurant on top of the National Portrait Gallery, with breathtaking views of the Nelson statue and St. Paul's. 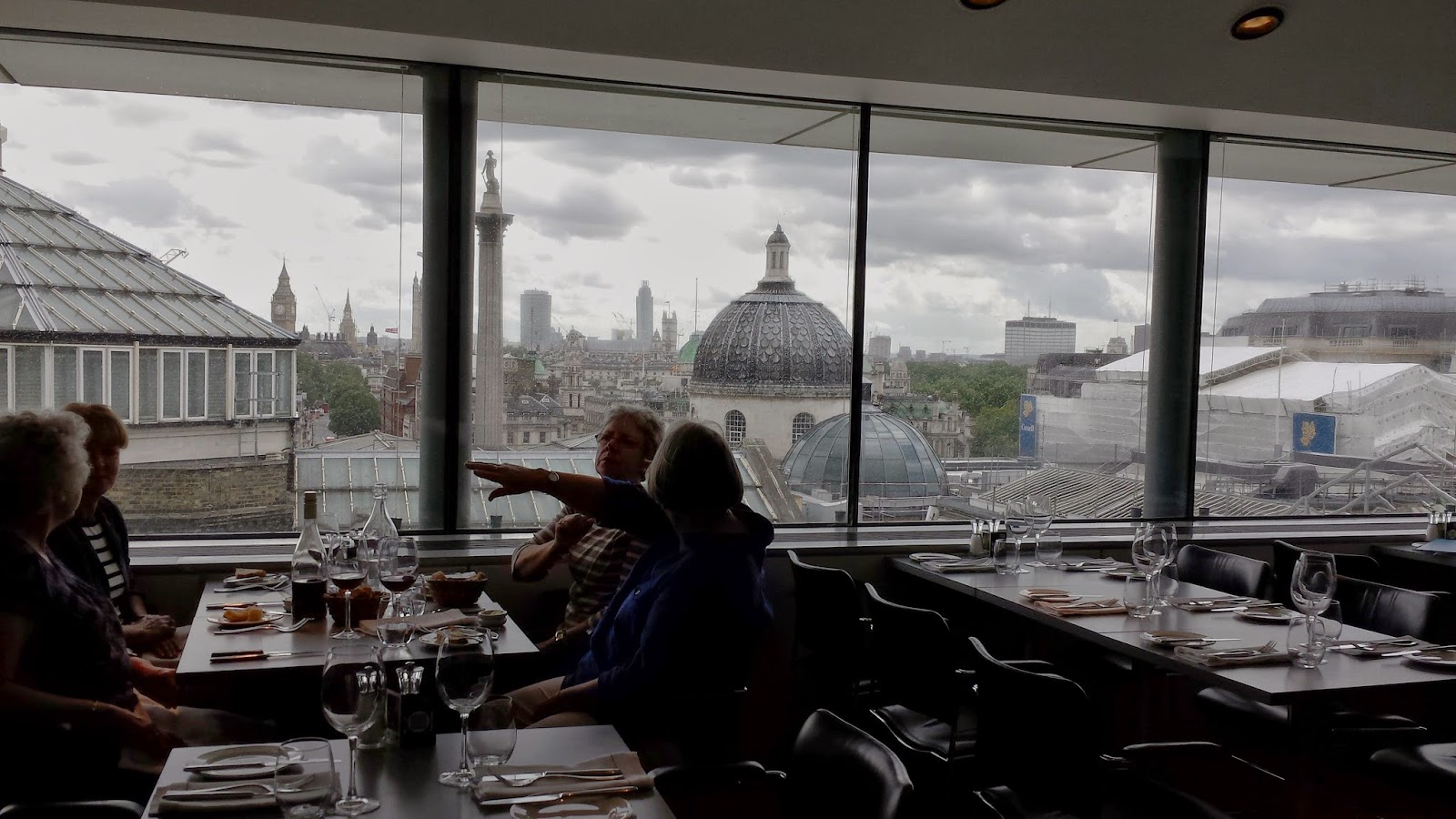 On top of the National Portrait Gallery﻿ 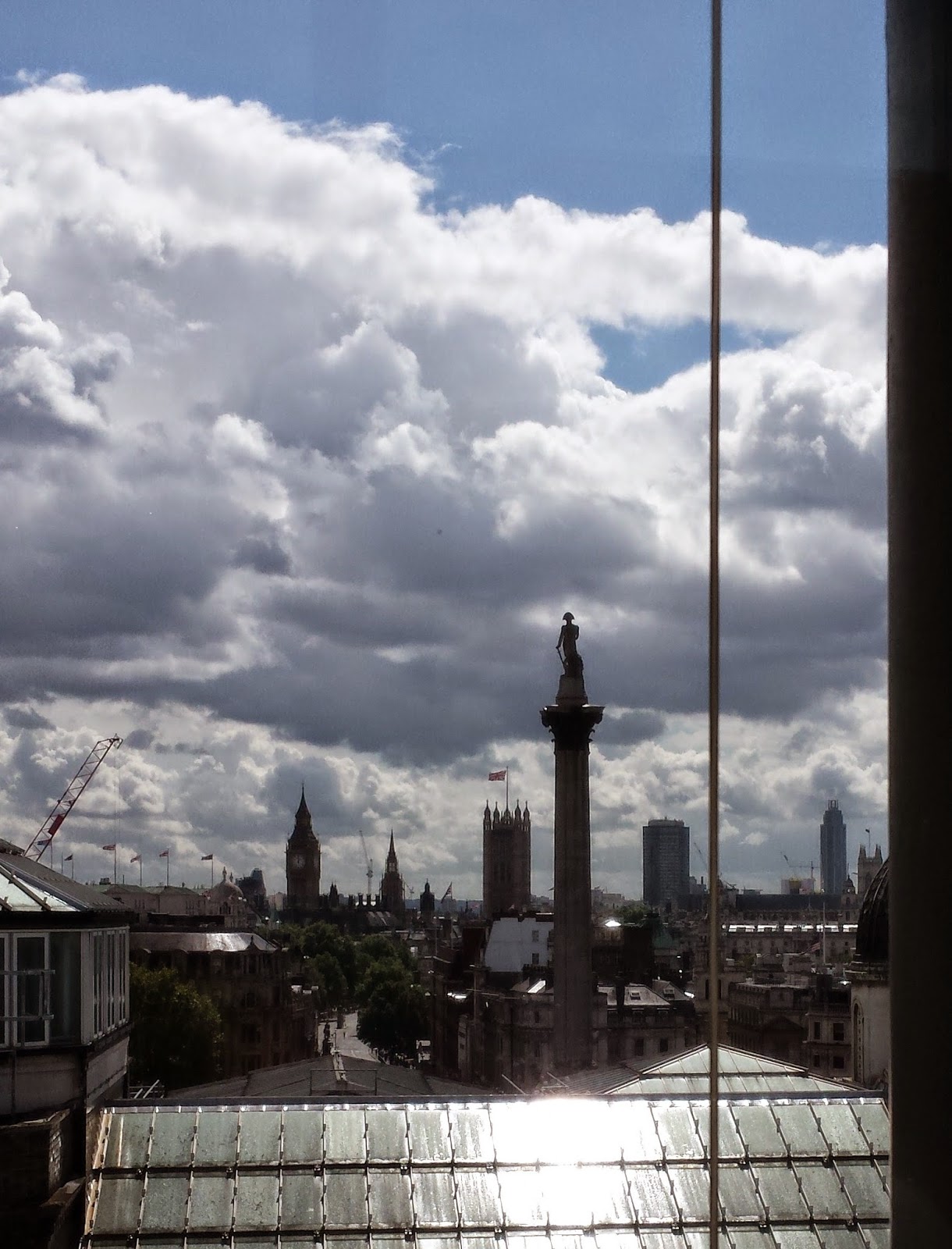 The view
﻿
Jan had an errand in South Kensington, after which we took advantage of the fact that we were near the Victoria and Albert Museum, and enjoyed looking around at interesting things there, until they closed. 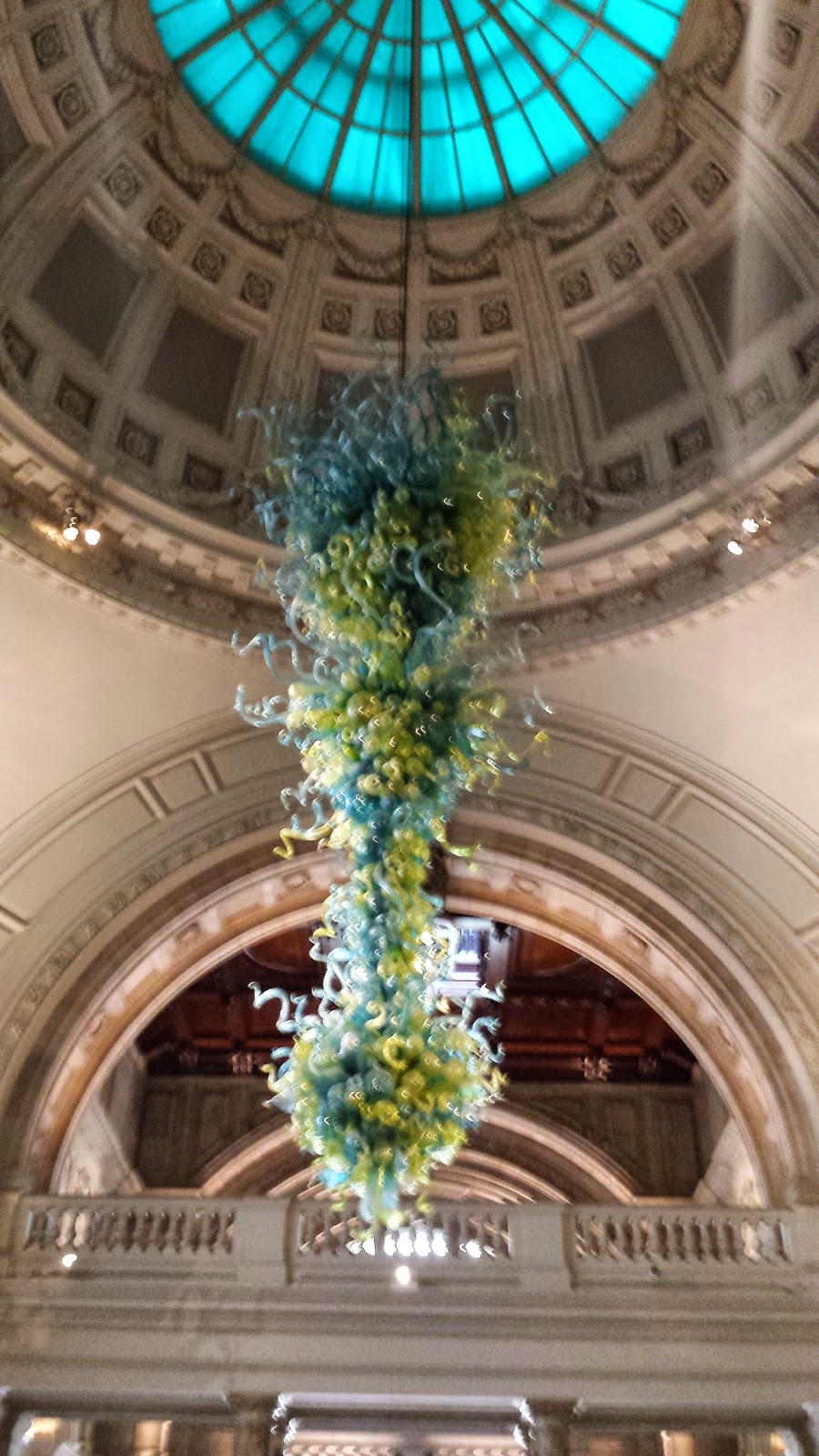 Gorgeous Italian glass sculpture at the V & A 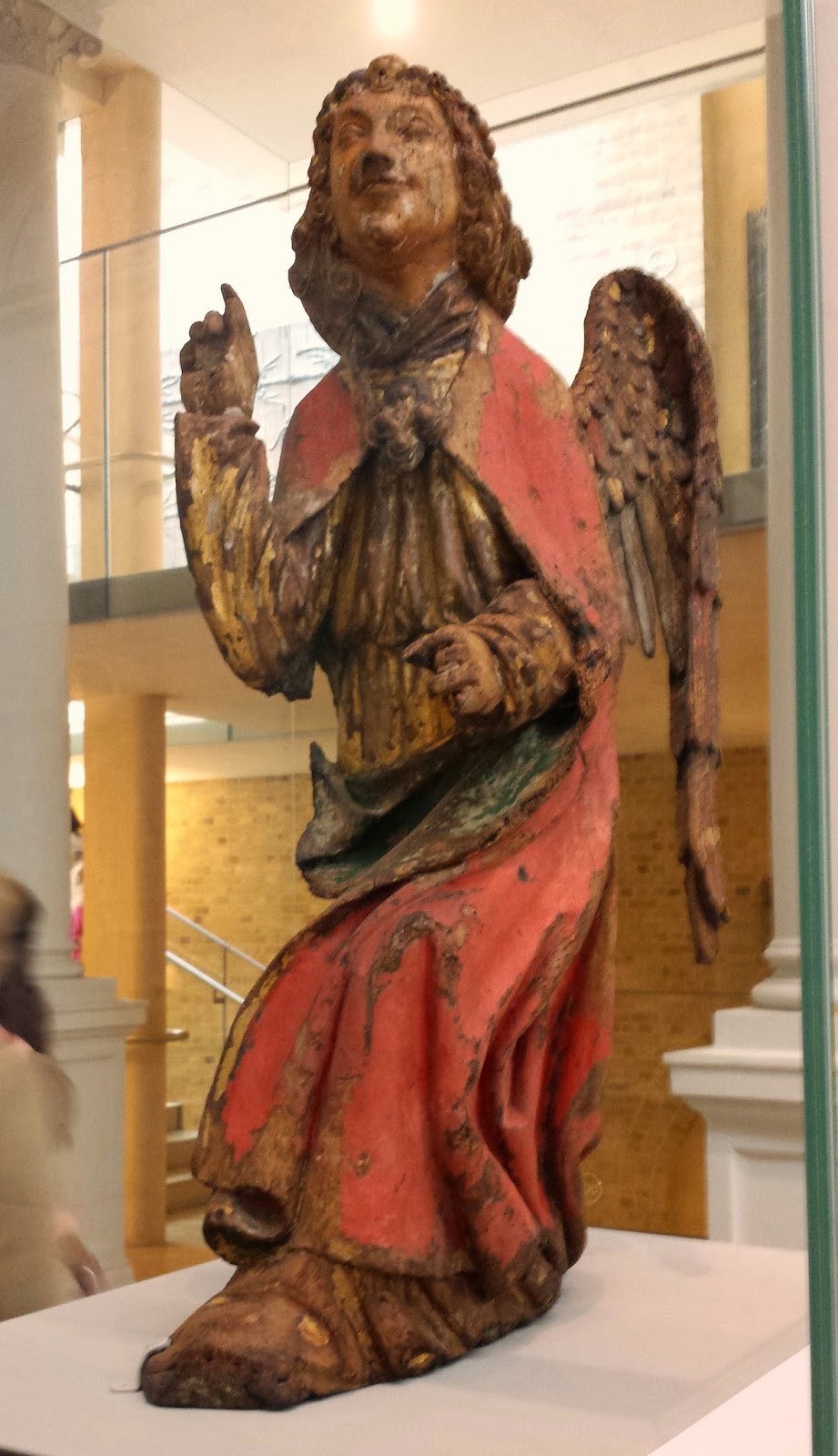 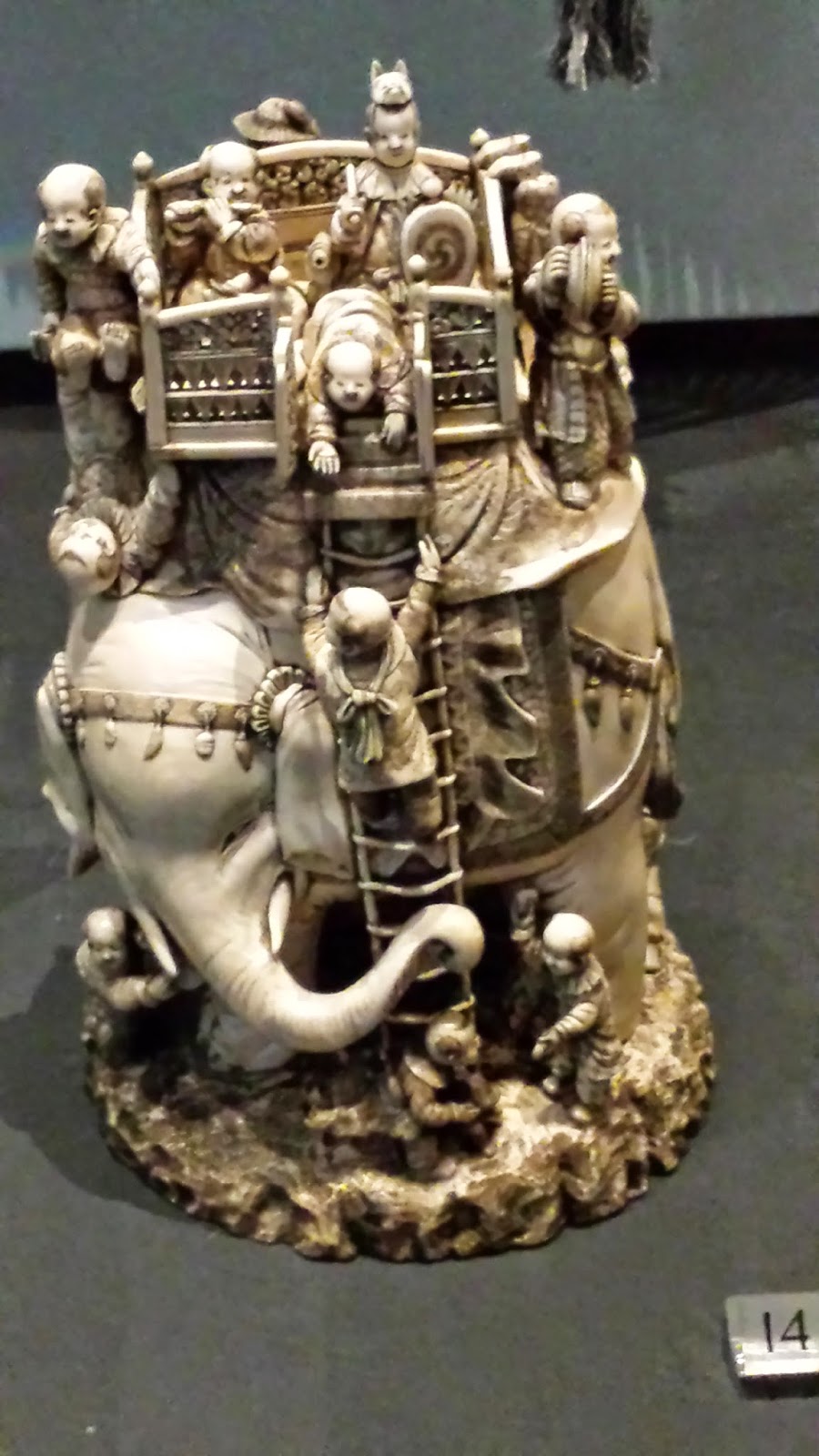 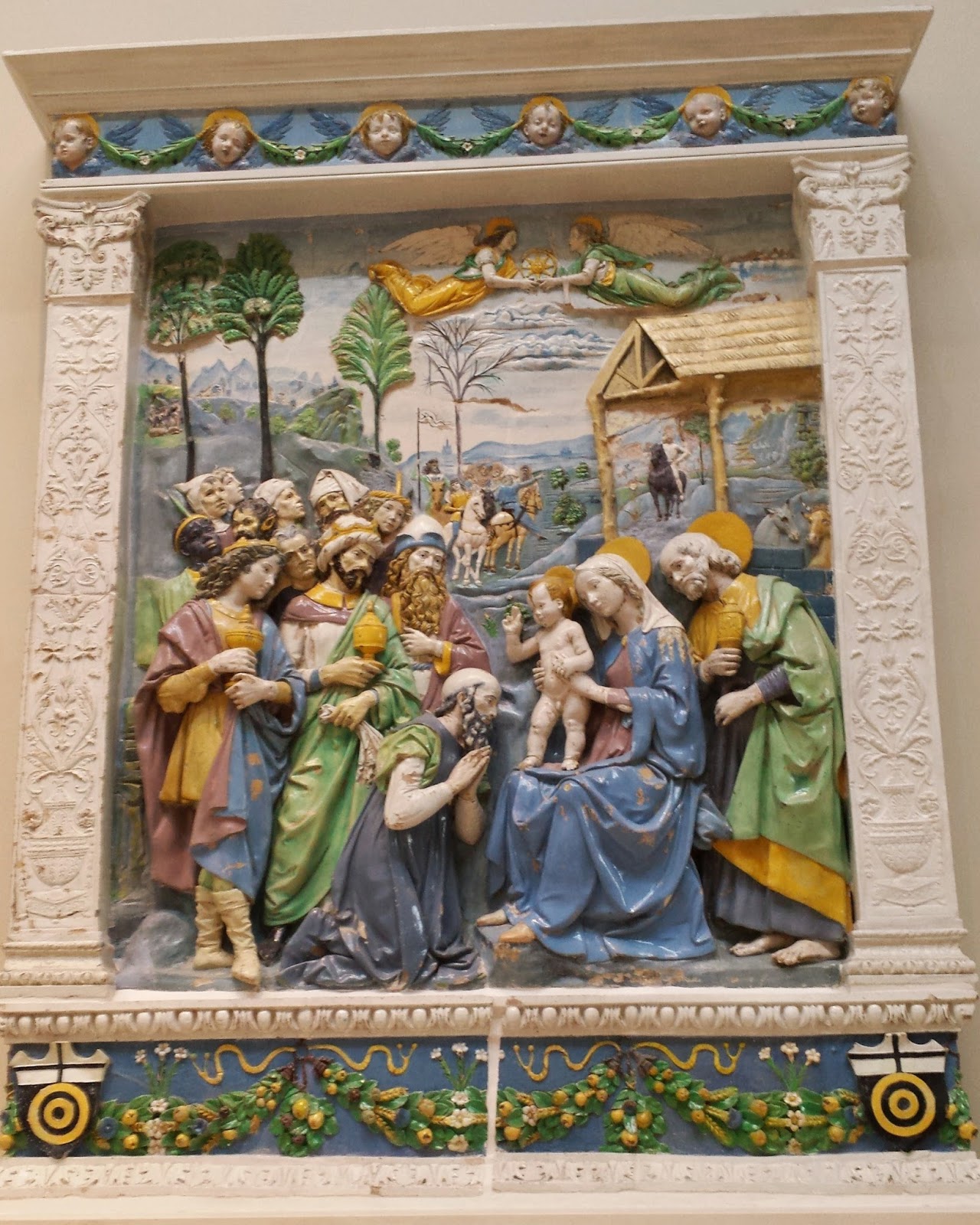 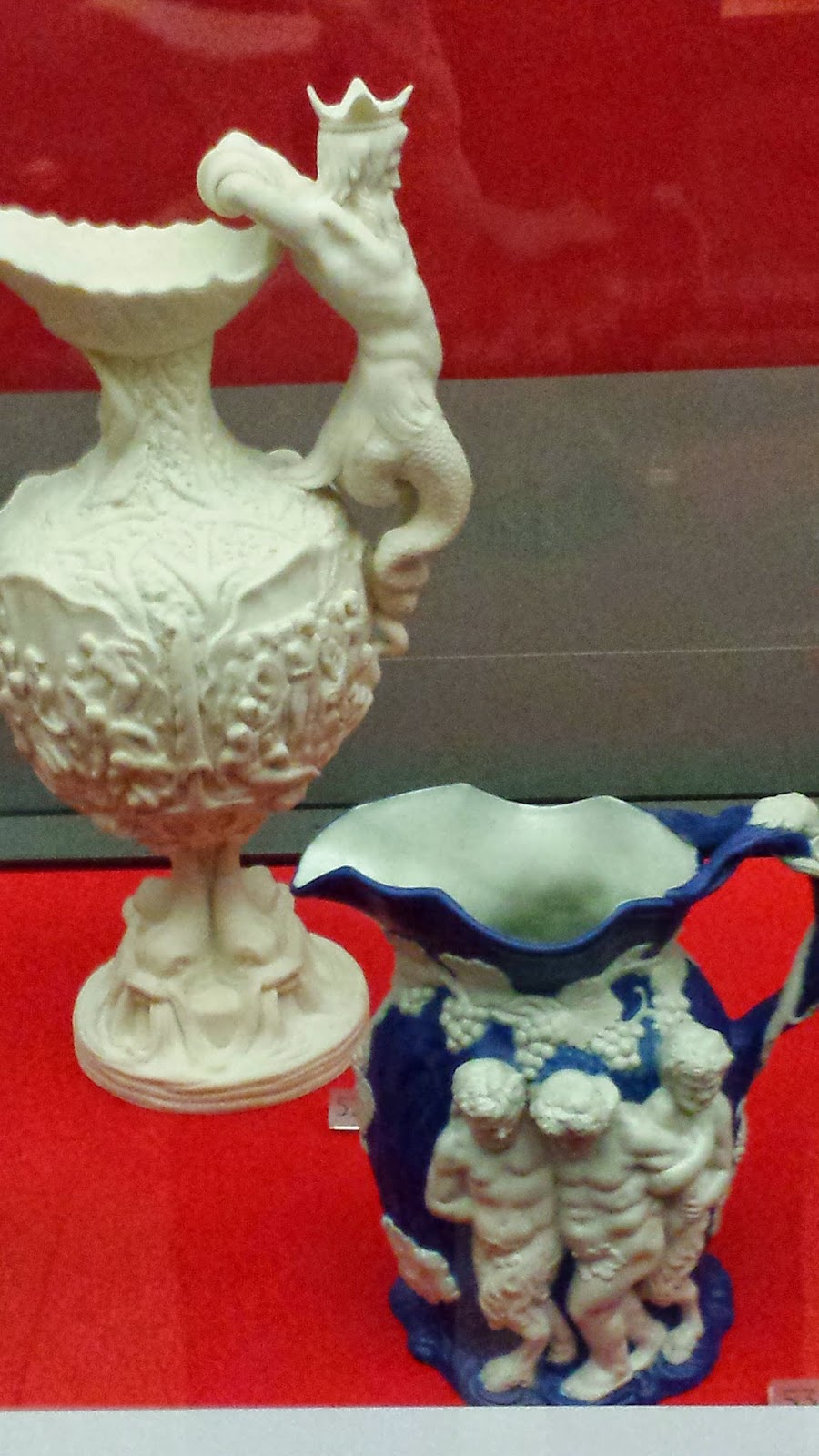 These could be in my house... 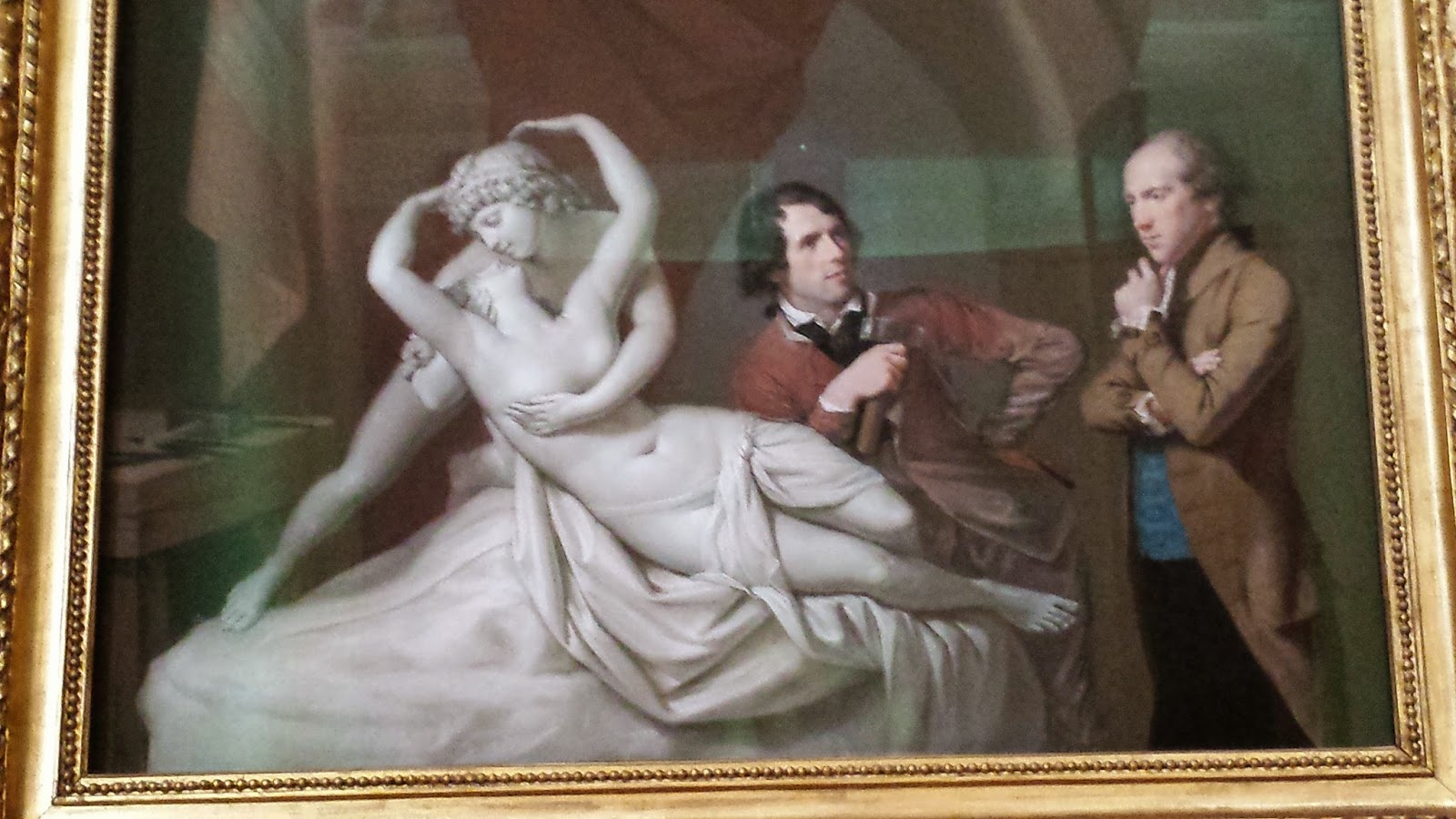 Canova and his art dealer, a rum looking pair
﻿
Grabbed a quiche and some internet at Le Pain Quotidian, then took the tube to Kings Cross, caught the 7:15 train to Cambridge, arrived at 8 and Derek picked us up. We then had creme brûlée and tea and went to bed after a tiring day with a lot of walking, but enormous stimulating fun, stuffed with new thoughts and images. 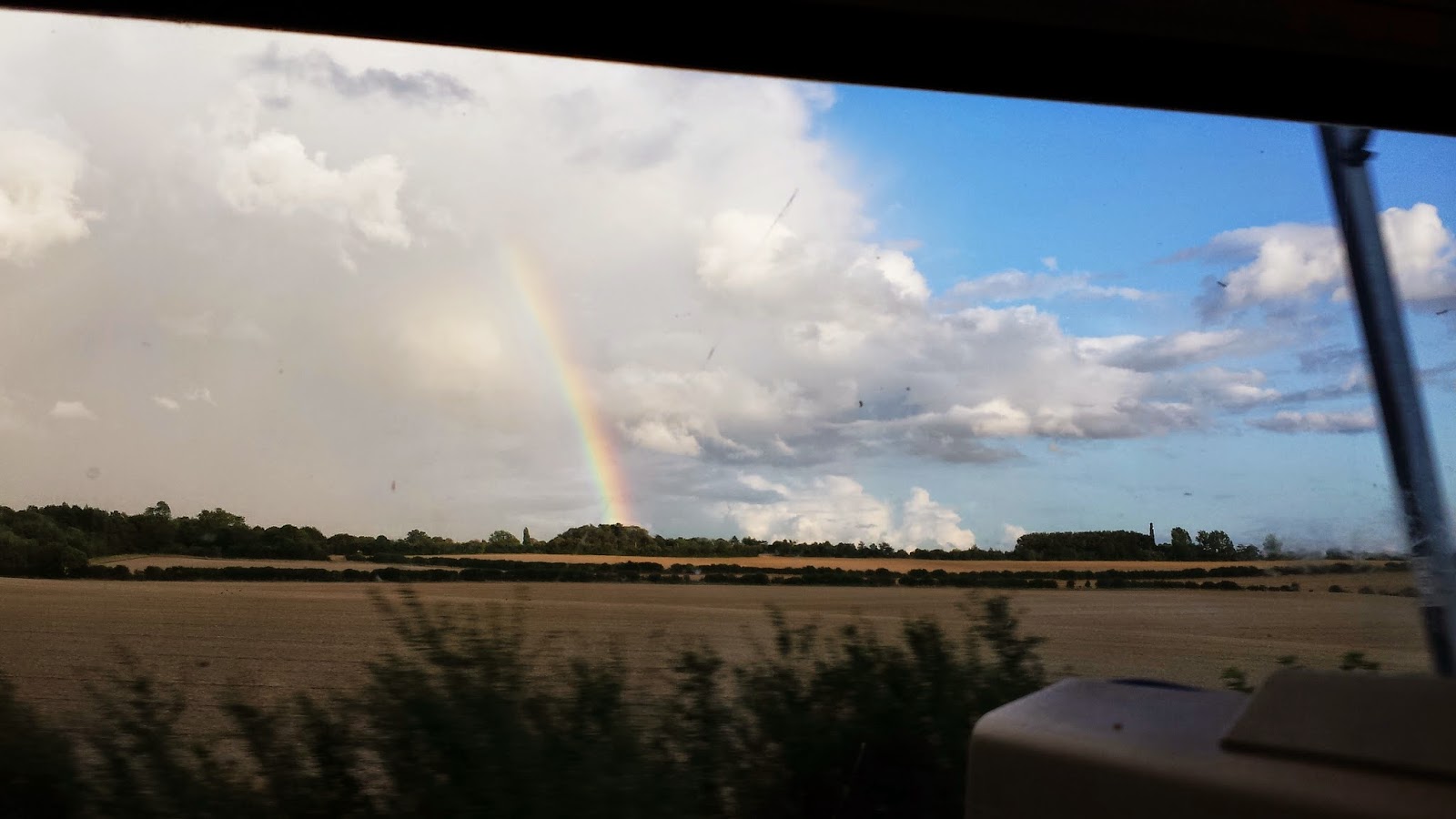 Rainbow seen from the train 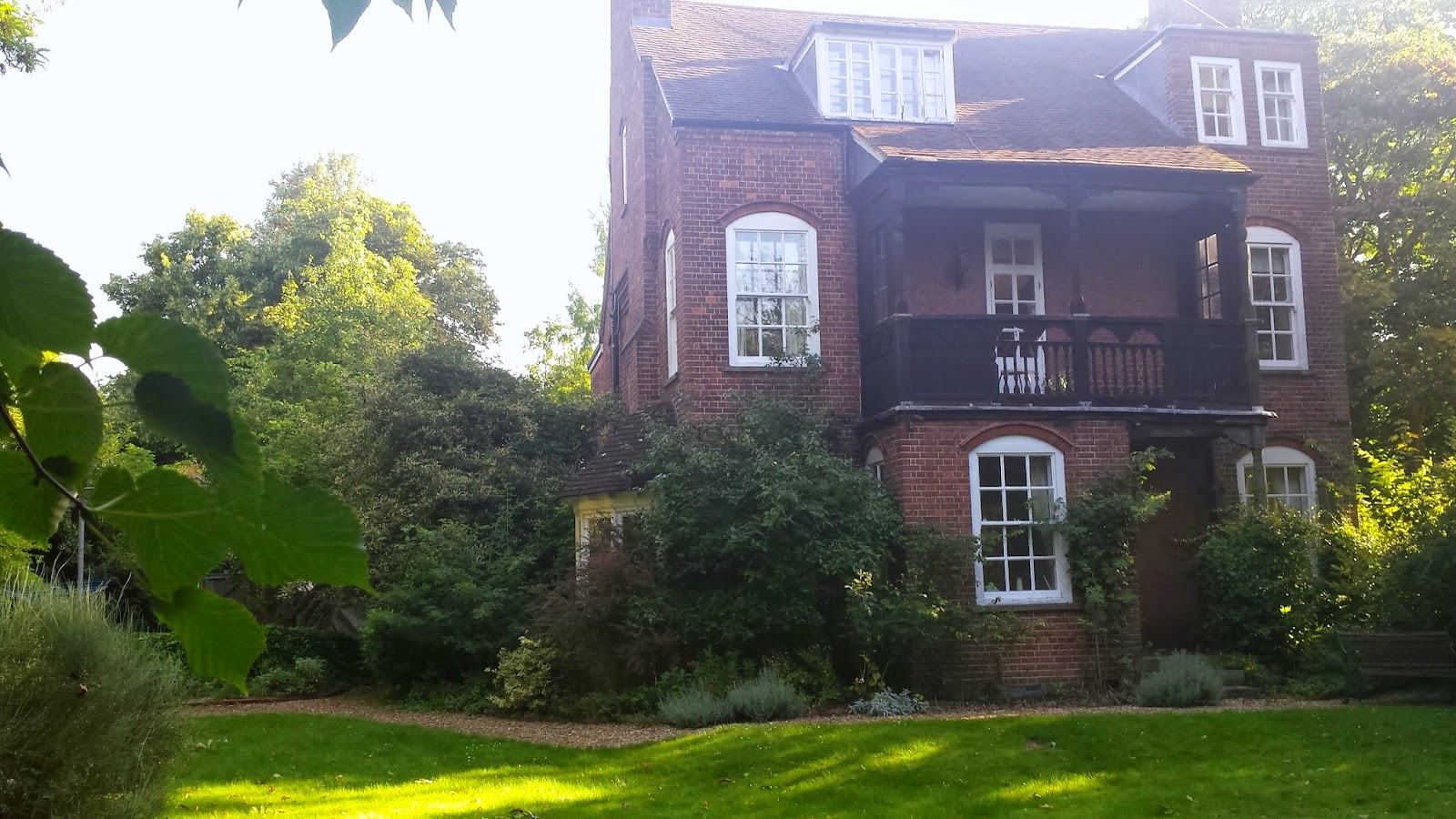 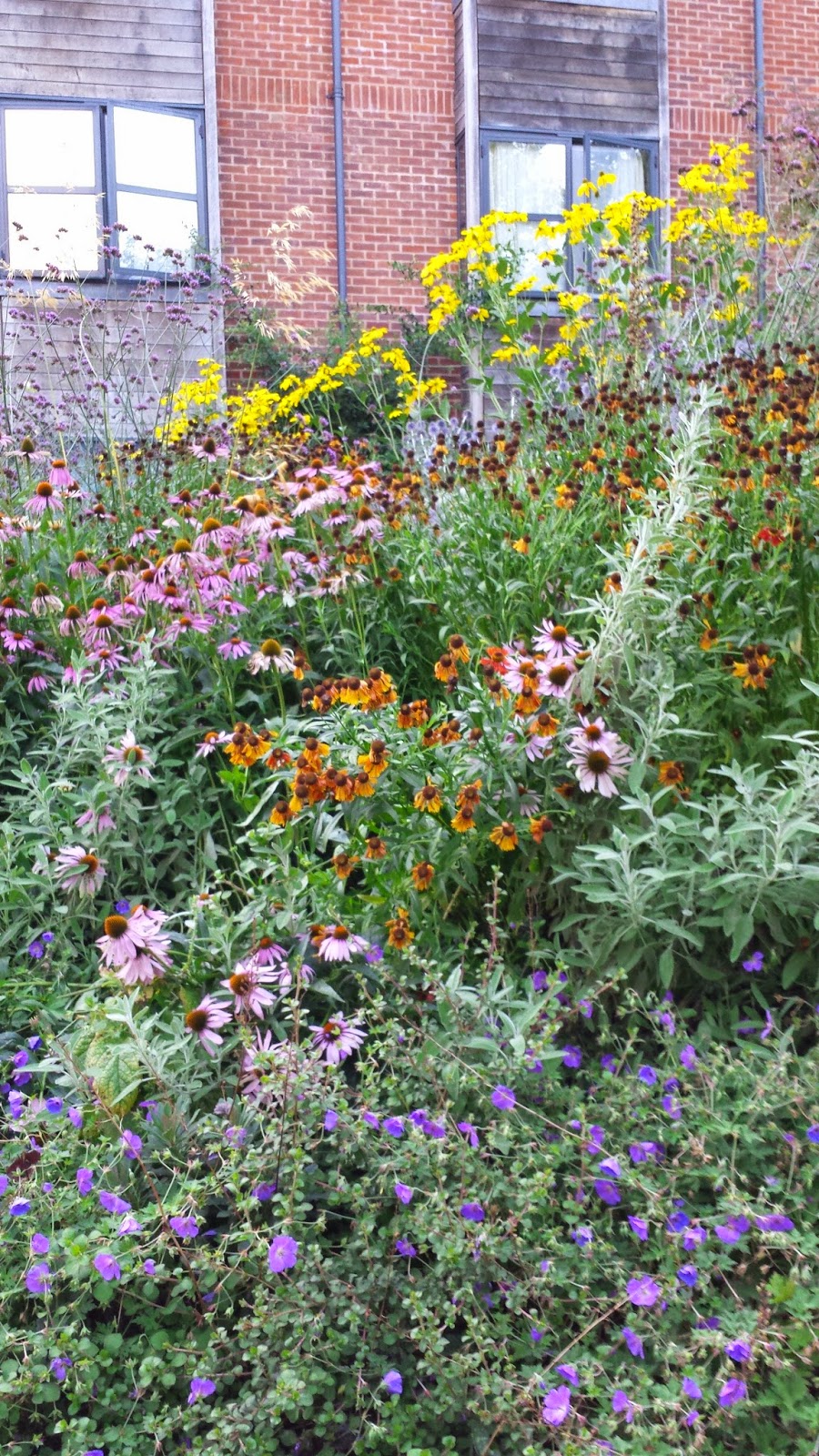 Flowers at Lucy Cavendish.
﻿
Posted by Diana Birchall at 4:00 AM

How lovely it would be to live in Cambridge again - so handy for London. What a full day you had - my legs ache for you but so special to be able to travel with a friend with whom you can immediately exchange thoughts. I'm glad you were able to see the VW exhibition. Barbara

A very rich day indeed. I liked the Morrell photograph of Virginia Woolf best. It seemed to me to capture her for real -- I know photos are said to be constructed too, still .... Ellen

I really do conclude that Cambridge would be the perfect place to live, Barbara. I am more fortunate to have friends there, than I can adequately convey.
Ellen, yes a rich day exactly describes it - and my legs weren't so bad, Barbara, because we kept sitting down for tea! :-)