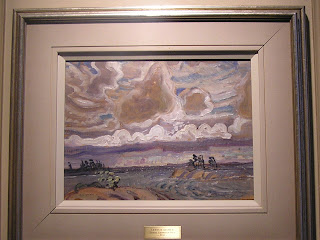 My favorite Group of Seven painting at the Faculty Club 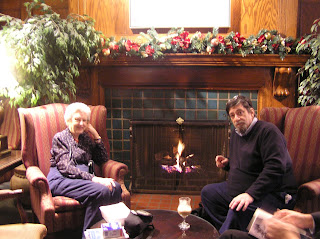 Peter and Mary at the Faculty Club

Well, we're home - after such a trip, you'd think we were returning from China. First there was the hurry to clean up the cabin and deal with our luggage before the Temagami taxi driver Romeo came (he turned out to be an ancient, chirpy little man whose mother had many sons and hoped for a daughter called Juliet). We waited on the station platform in cold rain, as the pretty little station is closed for the winter, but the train came chugging up on schedule, and fortunately the conductor helped us get our luggage aboard. We had four small but heavy suitcases with wheels, thanks to the necessity for Peter to lug seven weeks' worth of weighty tomes (what would he have done without the Oxford Dictionary of English Proverbs, or Alexandrians Under the First Three Ptolemies, pray tell? There were also five heavy carry-on totes, too wearisome to enumerate their contents, but books squashing cookies would be a fair description. The conductor mentioned that we weren't allowed to bring more than two small bags, under 50 pounds, onto the train (must have been listed in extremely small print somewhere; I know I never saw it), but he would make an exception just this one time. This seemed an extraordinary statement as the train was almost completely empty. But we got comfortably seated and read and dozed for the awfully long 8-hour journey. Dull gray day, not much to see. Had an egg sandwich and tea in the dining car by way of diversion. As we approached Toronto, we chatted with a spry elderly man in a beautiful beaver cap, who was 92 years old and had traveled the world. He lived near Cochran, the train's northern terminus, so it was an 11-hour ride for him, but he said he'd never allow any of his three daughters in Toronto to pick him up at the station - too much trouble, he'd take a cab. He alit nimbly from the train and sprinted on ahead of us. 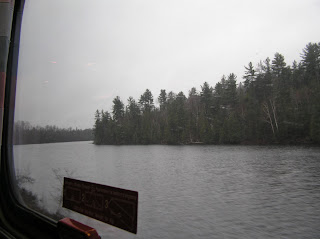 On the Northlander train from Temagami to Toronto 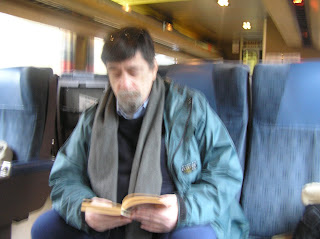 Peter on the train


We were slower than the 92-year-old man because at the Toronto train station, there was a truly grim amount of suitcase lugging; Peter ought not to carry or pull much, so he pulled one wheeled suitcase and carried one or two shoulder bags, while I - you guessed it - carried the REST. When we found my cousin Frank who'd come to pick us up, he seriously asked if *I* was having a heart attack! I was wondering that myself as my left arm especially was aching, but it turned out to be merely that half-pulled-out-of-the-socket feeling. 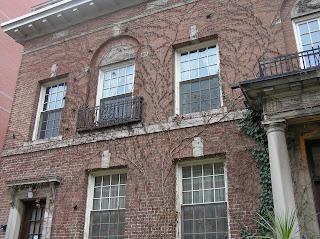 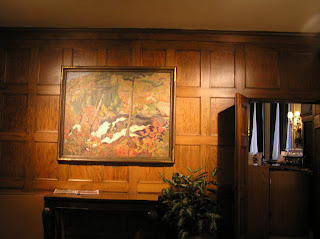 Frank and his wife Jane (Frank's my cousin Tim's oldest son, a negotiator for the city) gave us a truly delicious dinner (pork chops, rice, brussels sprouts with garlic and ginger beautifully cooked, lemon cake), in their lovely Victorian Toronto home, but just as I was about to go to bed, I checked email - work had sent me a script, which I didn't dare not do right then! By the time I read it, wrote it up, and dealt with the wireless network it was 3 AM. Got up early to finish, to re-pack the bags, and get ready for Tim and Mary who were coming at 11 AM to take us to lunch at the University of Toronto Faculty Club and then to the airport. Our cousin Katie and her charming husband Ian came too. Katie very kindly brought short-acting insulin for Peter (we suspect his high sugar readings have been due to an infected tooth - he's been taking antibiotics and looks and feels better already). The lunch was lovely; I had roast lamb. At the Faculty Club you can see wonderful paintings by the famous Canadian Group of Seven, and I had a good stare at them and we sat by the fire after lunch for awhile. Tim and Mary are both 85, and not only look good but are still driving - it was so kind of Tim to take us to the airport! 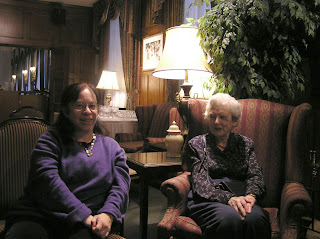 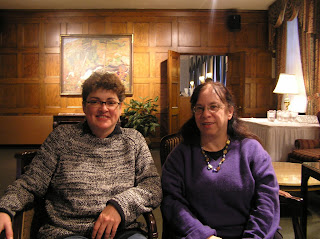 Once there, Peter and I had to deal with The Luggage problem again, which was so terrible Peter got ghastly tired and had to sit down before getting on the Customs line. Airline personnel even brought him water and asked if he wanted a wheelchair! (He macho-ly said no.) At one point I was hauling all four wheeled suitcases (it *can* be done, you drag them behind you two in each hand) plus three of the five carry-ons. (Book bag, pill bag, heavy miscellany bag, two laptops). Husky passersby helped a little. We were pretty much done in by the time we got to the gate, but I went and got Peter an iced coffee and a banana and he revived considerably. On the plane he felt fine again and spent some of the flight talking to our seatmate, a pleasant and intelligent German Toronto businessman.

But it was the bumpiest flight I've had in YEARS. Over the Rockies, we were hit by both bad weather and the jet stream bashing the plane from the side (I didn't know that was possible), and of the hundreds of flights I've taken in my life, this was one of the top three or four worst. The turbulence was so bad the plane RATTLED. I was rigid and white. Even Peter who is totally unperturbed by flying and considers it just plain safe, looked up and said, "Hm, this plane is taking an awful shaking, hope it holds together." The captain said very tensely, "We will be undergoing some mild to moderate turbulence for the next 15 minutes." The German said, "Oh, that's pilot talk for 'Hold on for the ride of your life.'" (Note to self: Moderate in this context means Extreme.) It wasn't any fifteen minutes either, it went on for at least half an hour, with another little spell later. I'd been watching Rebel Without a Cause, which I'd never seen in its entirety before, but I couldn't look at it, and never did find out what happened to James Dean in the end (does anybody know? Did he go to jail or did that car just take him home?).

When we finally landed, dear Jennifer was waiting. She does 200 sit-ups daily and whisked all our luggage onto a cart faster than I've ever seen anyone perform such a feat, and pulled it to her car. (There'd been no carts visible at the Toronto train station or airport. Probably fiendishly hidden behind pillars.) Peter, full of beans, wanted to be dropped at his coffeehouse to see his buddies, and Jennifer took me home where Paul was waiting, as we'd thought he wouldn't fit in her little car with all the luggage. Jennifer had brought us flowers! It was, to put it mildly, good to be home. 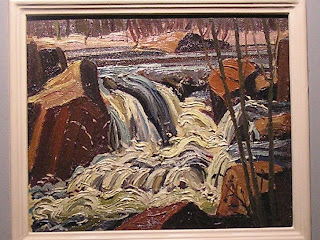 Posted by Diana Birchall at 7:18 PM