Venus Rising over the Lake - a Reflection 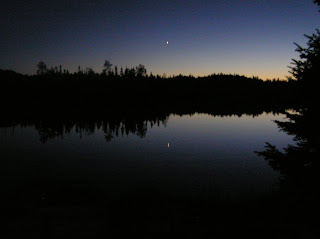 I was in Pifflechat today shortly after sunset, when I looked up and saw Venus reflected in the lake. The water was unusually still and glassy and you could see Venus's reflection clearly. I told Bevis (in England) that I was going to run out and take its picture and he said "Go for it." So I did. It was so dark that I had no notion it would come out, just my ordinary digital camera on no special setting, but it did. And five minutes later, I was showing the picture to Bevis and to his fiancee Helen in Australia. A very internet moment! I only saw stars reflected in a lake like that once before, at Lake May last summer; never thought I could actually take a picture of the phenomenon. But there it is. 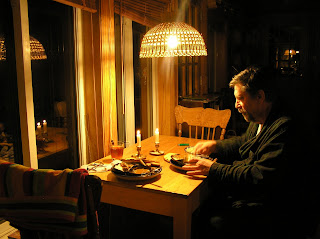 As I'm writing about Piffle, I'll say I was completely charmed when another piffler, Farley's Footwear (real name Ian), wrote a haiku about me at Lake Temagami. To understand the poem, you have to know that my Piffle nom is Miss Schuster-Slatt, after the pushy character in Dorothy L. Sayers' Oxford novel, Gaudy Night. I relate to her in a similar way as I do to Mrs. Elton. (By the way, Bevis's Piffle nom is Vamping the Senior Common Room, and his fiancee Helen's is Leoville. I chat with them most days, and also with Sandy (Rachel Levy), Debbie (A Menace to Society), and others. Here's the haiku:

When we were in Vermont, we went out at around 10 at night for three nights straight. The sky was filled with stars and we could see Venus.

Your photo with just the one star at the center is comforting.

Fanny would have loved it.

Fancy meeting you here. (Though nothing should surprise me in this crazy connected world we live in these days....)

I re-read Murder Must Advertise this week, and was suddenly reminded of all you lovely pifflers. Trying to bring the names of all of you long-lost friends to mind, Bevis's popped into my head...I googled "Bevis" and "piffle"...and landed here on this post!

How lovely to know that you are all still piffling...and how absolutely incredible that Bevis and Helen are engaged! Please fill me in!!! I MUST know the details!

I do hope you and your husband and son are all well...