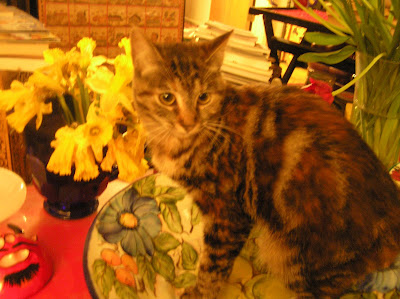 I never liked Southey. It was his letter to Charlotte Bronte that did the business. When she was twenty-one, she wrote to ask the then Poet Laureate (1837) for his advice on a writing career, and he responded with, "Literature cannot be the business of a woman’s life, and it ought not to be. The more she is engaged in her proper duties, the less leisure she will have for it, even as an accomplishment and a recreation. To those duties you have not yet been called, and when you are you will be less eager for celebrity.” Charlotte wrote back, politely but not without sarcasm, "I trust I shall never more feel ambitious to see my name in print; if the wish should rise, I'll look at Southey's letter, and suppress it." 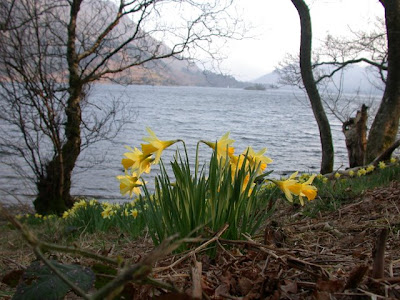 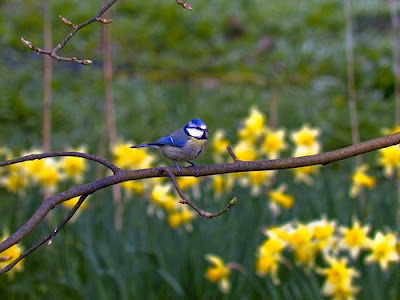 Yet I came across a quote about Southey that was positively endearing, and won me to him, for the man had a nicer side. He liked cats! Yes, he did, and he sounds quite as silly about them as I am. This catly quote comes from the excellent book by Kathleen Jones, A Passionate Sisterhood: The Sisters, Wives and Daughters of the Lake Poets:

"Southey once remarked that a home was not complete unless it contained a three-year- old child and a six-week-old kitten. [He had] a whole tribe of cats with names like Pulcheria, Madame Bianchi, Lord Nelson, Bona Fidelia, Baron Chinchilla, Rumpelstilzchen, Hurlyburlybuss and the Arch Duchess Knurry-murry-purry-hurry-skurry. Prester John gave birth to a litter of kittens and had to be renamed Pope Joan. Their lineages, escapades and 'cat-astrophes' were recorded by Southey in 'Memoirs of Cats Eden,' an essay written for Edith May and subsequently published in The Doctor. Cats Eden was often given as the address on his letter-headings. Southey loved children and became a benevolent father-substitute to his niece and nephews. He regularly wrote stories and poems for them, the most famous of which is the tale of the Three Bears." 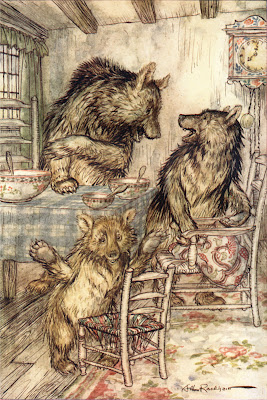 A Passionate Sisterhood is a good companion piece to Janet Todd's Death and the Maidens, which is about the life of Fanny Imlay and gives much insight into the Shelley/Byron circle, and the way the not-so-Romantic poets treated their women. Jones's book shows that Coleridge and Wordsworth, like Shelley and Byron, were social idealists in theory, but the lives of their women tell another story. Typically, Coleridge wrote, "I can neither retain my Happiness nor my Faculties, unless I move, live, & love, in perfect Freedom..." A woman did not have the right to expect a man to love only one woman, and Coleridge does not say what is to happen to a woman's need for "perfect freedom." He also wrote, "The perfection of every woman is to be characterless. Creatures who, though they may not always understand you, always feel you and feel with you."


A very private love: Martial on my lap 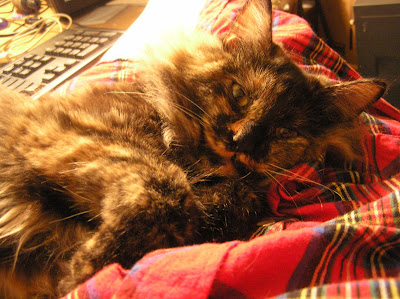 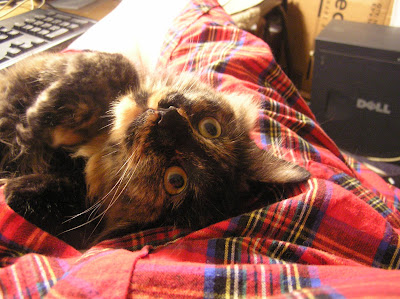 Sara Hutchinson, whom Southey loved, took a different view. "Old Maid as I am, don't think that, though I firmly believe that the balance of comfort is on our side, I am a favorer of a single life - comfort is but a meagre thing after all - but I have seen such misery in the marriage life as would appal you if you had seen it. Such millstones about the neck of worthy men! Of course you will not suppose that I think all the fault belongs to the women."

Coleridge's daughter, Sara Coleridge, was a literary lady, and wrote of her favorite authors: "The profundity of Mme de Stael, the brilliancy of Mrs. Hemans (though I think her over-rated), the pleasant broad comedy of Miss Burney and Miss Ferrier, the melancholy tenderness of Miss Bowles, the pathos of Inchbald and Opie, the masterly sketching of Miss Edgeworth (who like Hogarth paints manners as they grow out of morals, and not merely as they are modified and tinctured by fashion); the strong and touching, but sometimes coarse pictures of Miss Martineau...and last not least the delicate mirth, the gently-hinted satire, the feminine decorous humour of Jane Austen."

But when Sara Coleridge married her cousin, Henry, and gave birth to two children in two years, becoming extremely ill, she begged her husband to allow her two or three years' respite from child-bearing. "This assurance Henry felt himself unable to give. They were newly married - he had an ardent nature; abstinence was unthinkable." 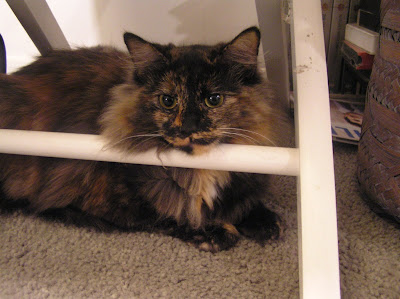 
Against this background, Jane Austen's decision to remain single looks more attractive. Or there was the option of taking up a place on the sofa as an invalid, like Elizabeth Barrett Browning. (I really am getting to like Mary Wollstonecraft more and more.) I don't know any pair of books that have taught me more about women's condition in the 18th and early 19th century than A Passionate Sisterhood and Death and the Maidens.

Reading them led me, naturally, to ponder how familiar Austen was with Wordsworth and Coleridge, and how their work affected her. The perfect book to answer this question is Jane Austen and the Romantic Poets by William Deresiewicz. Certain it was that Austen was as familiar with Lyrical Ballads as any reading person in England. Deresiewicz points to the Tintern Abbey reference in Mansfield Park, where Fanny Price's room is described:

"...its greatest elegancies and ornaments were a faded footstool of Julia’s work, too ill done for the drawing–room, three transparencies, made in a rage for transparencies, for the three lower panes of one window, where Tintern Abbey held its station between a cave in Italy and a moonlight lake in Cumberland, a collection of family profiles, thought unworthy of being anywhere else, over the mantelpiece, and by their side, and pinned against the wall, a small sketch of a ship sent four years ago from the Mediterranean by William, with H.M.S. Antwerp at the bottom, in letters as tall as the mainmast." 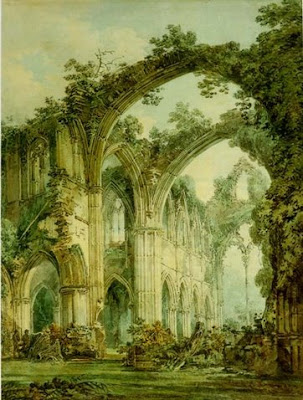 
Deresiewicz's book provides illuminating springtime food for thought. He theorizes that the difference between Austen's first three novels and her last three reflects the influence of Wordsworth and Coleridge. He reasons that in the later novels Austen opens her imagination to the whole world of economic realities that lie below the lives of the country gentry, more than she did before. Showing a more Wordsworthian sense of time and change, she does not bring her later novels to full closure (to the rejoicings of future sequellists).

But this is not taking us to the subject of cats, even after Southey's promisingly cattish quote. So I will proceed forthwith to my monthly Cat Report. The darlings are getting Larger, as they approach nine months in age; they are fatter, and their coats so glossy and luxuriant, they positively gleam. My proper study, in addition to Austen and the Romantic poets, continues to be the psychology and interaction of cats. It is invaluable to have constant exposure to three such fascinating moggies as ours. They alternate between wildness and somnolence, playfulness and bickering, secret love and public disdain. I wish I'd been able to photograph their funniest fight, but it would have come across as only a blur. These problems will soon be solved, and my cat pictures should much improve, because I've just bought a new camera - a Panasonic Lumix DMC FZ28s (s for silver). It was a particularly diverting fight, too: Pindar and Catullus both stood on their hind legs on the high back of a chair; I don't know how they balanced so long, a full five minutes, while trading blows with their little paws, interspersed with bared teeth and nips. They stood there punching each other rather ineffectively, like little feline boxers, until finally (and inevitably) Catullus conceded by jumping down from the chair. Only then did Pindar majestically make her own descent (mind you, at seven pounds she is by far the smallest cat, a sleek sparrow among huge crows), and began deliberately licking her paws. Martial, who had been watching the proceedings intently, then went over to her, bowed low, and licked her paw, in as obvious a gesture of fealty and obeisance as has ever been given in a medieval court. 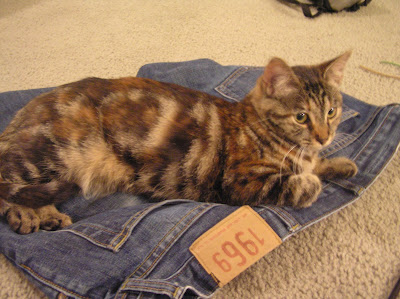 Pindar, Queen of the Cats: Nothing gets between me and my...


The only other news of the cats is of their extreme suffering in the late heat wave. Fortunately it lasted only two days, but the temperature spiked to 93 Fahrenheit, and that's too warm if you're wearing a thick floor length sable coat, boots, Russian hat and mittens. Which is what our two poor, long-haired cats were wearing. Short-haired Pindar was as frisky as ever, but the two longhairs were lying flat out on the floor like mink throws, looking so miserable! Having been born only last August they had never endured hot weather with full heavy manes before. I put up a fan, which they disdained, and we couldn't have them in the air-conditioned bedroom (not putting a litter box in there). They lay out on the terrace, but in the afternoon it baked, and they tried to take shade beneath the scraggly bougainvillea, looking so pathetic. I tried forcing them to drink more water, but they were too stupid to make the connection, and I don't know how they will ever fare this summer!

Catullus on a hot day 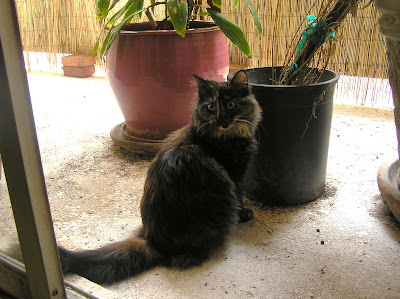 I WANDER'D lonely as a cloud

That floats on high o'er vales and hills,
When all at once I saw a crowd,

A host, of golden daffodils;
Beside the lake, beneath the trees,
Fluttering and dancing in the breeze.
Continuous as the stars that shine

And twinkle on the Milky Way,
They stretch'd in never-ending line

Along the margin of a bay:
Ten thousand saw I at a glance,
Tossing their heads in sprightly dance.
The waves beside them danced; but they

Out-did the sparkling waves in glee:
A poet could not but be gay,

In such a jocund company:
I gazed -- and gazed -- but little thought
What wealth the show to me had brought:
For oft, when on my couch I lie

In vacant or in pensive mood,
They flash upon that inward eye

Which is the bliss of solitude;
And then my heart with pleasure fills,
And dances with the daffodils. 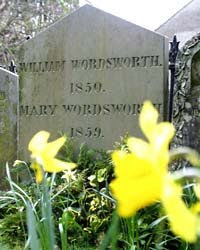 Daffodil pictures from the First Daffodils 2009 site and the Wordsworth Trust
Posted by Diana Birchall at 5:09 PM 6 comments: