Acting Up in Seattle

I've written about the experience of writing and acting in one's own play and the exhilarating feeling that comes when the audience laughs (not at you, but well, you know what I mean).  That post is on the Austen Authors blog, www.austenauthors.com  But I thought that here I'd give a picture of the whole visit, when Syrie James and I flew up to Seattle to play Jane Austen and Charlotte Bronte in my playlet, "You are Passionate, Jane." 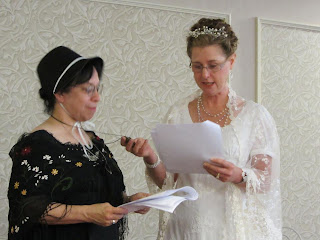 Me and Syrie as Charlotte Bronte and Jane Austen in "You are Passionate, Jane"
(photo by Sallie Tierney)

The play takes place in Heaven, where Jane is the Literary Gatekeeper, and I cast the divine Syrie who keeps my Charlotte writhing in suspense to see if she "ascends" or not.  It was enormous fun: the performance, the relief that it went so well, and the royal way we were entertained by our JASNA Puget Sound region friends!  So, here is my diary...

Trip started on a fraught note, as I didn't finish my work manuscript till 3 AM and I had to get up at 5 to make the 7:20 AM (yes, AM) flight.  So, with an hour and a half of sleep, and hating flying at the best of times, I felt pretty ragged.  Luckily kind neighbor Pam drove me to the airport, and the flight was a smooth two hours over pretty mountains.  On arrival, I waited listening to awful Princess Cruises greeters herd their victims, but my hostess Laurel Ann Nattress (of premier Jane Austen blog Austenprose fame) met me and we collected Syrie.  Then we drove straight to the Queen Mary Teahouse, which is just what it sounds like and what it ought to be:  a cunningly English enclave bursting with pretty china, scones, cakes, sandwiches, and flowing with tea.  We were joined by two other Austen Authors, Shannon Winslow and Susan Mason-Milks, whom I knew online but now happily know in person. 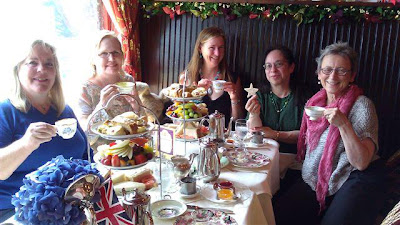 Then we drove to Laurel Ann's lovely country cottage in Snohomish.  Lovely sunny day, green countryside farmland, her cottage so English and pretty, with the exquisite English garden she made... lobelias, hollyhocks, foxgloves, roses to perfection.  After enjoying rapturous breathfuls we repaired to an English pub to dine with members of the JASNA-Puget Sound group, Marian, Ken, Charlene and Julie.  Lovely folks, delicious steak pasty and spinach salad - but I was falling asleep at the table, so they drove me to Julie's pretty condo in Redmond where I was to sleep, er, crash.  Delighted to make the acquaintance of her handsome boy cat Byron, an English shorthair in a trim cat suit of grey with orange eyes. 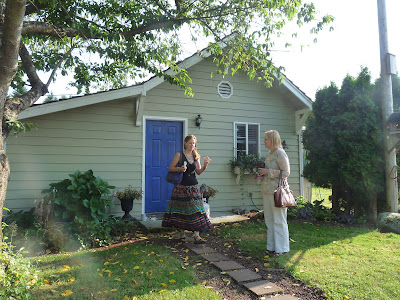 Syrie and Laurel Ann at the cottage 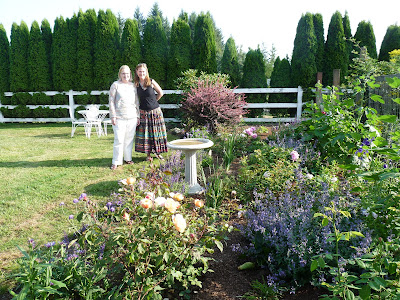 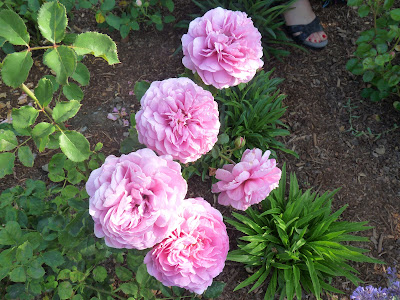 Saturday.  Slept like the dead, then woke up and had a cappuccino at a coffeehouse across the way called Tully's like my cat. Then we drove to Laurel Ann's, and all four of us went to Snohomish, a veritable village of antiques stores, never seen anything like it outside England and went a little bit crazy! We had lunch in a pretty place with especially good scones and homemade raspberry jam; also a Dungeness crab omelette.  Then shopping until dropping:  I bought a Venetian bag, Limoges earrings, a Carnival glass bowl and Shawnee porcelain gold vase.  Syrie bought a lace shawl and beaded reticle, and Julie got the most amazing vintage shoes like a cyclamen flame. 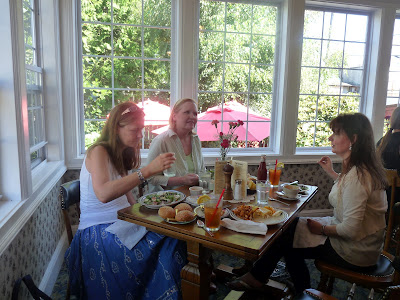 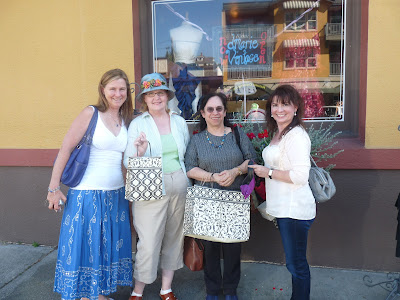 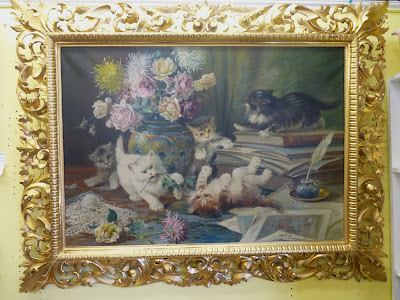 On the way back we stopped at a fruit stand and picked up fresh corn and blackberries. Laurel Ann and Julie then proceeded to bake the most gorgeous blackberry pie! Dinner was salmon, corn, quinoa, salad, pie and ice cream. First course enjoyed outdoors, but finished the rest inside. Then back to Julie's to sleep. 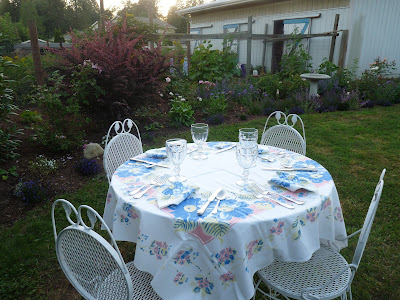 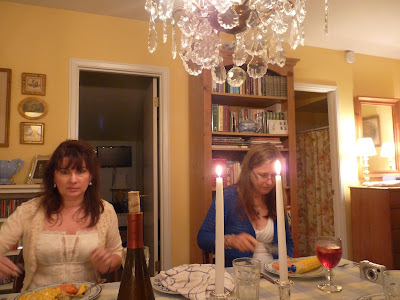 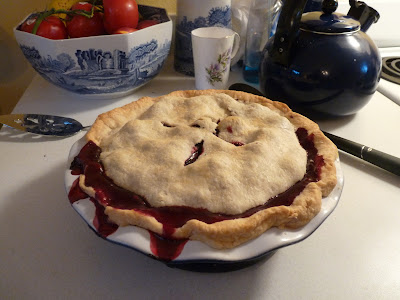 Sunday.  Day of the play.  We drove to the venue on Mercer Island, and I changed into my costume. Syrie and I primped and prepared, while mixing a bit with the arriving group members.  Then we were introduced and went up to the "set" of chairs and our props on a little table, and launched into it.  Didn't use microphones, but it all went well:  audience laughed a lot!  Syrie was magnificent, the very airy, grand, whimsical, authoritative and tart Jane Austen in Heaven; all I had to do as Charlotte Bronte was to react against her with tears, rage and resentment, until...well, I won't give it away, but it was fun to be crowned!  Afterwards a short Q & A, and then we sort of collapsed and ate sandwiches and chatted with fellow Janeites.  Susan from the Piffle group came to see me, and so did Sallie the Byronist, and we chatted happily. Then dinner at an excellent Chinese restaurant with Syrie, Laurel Ann, Julie and Susan. 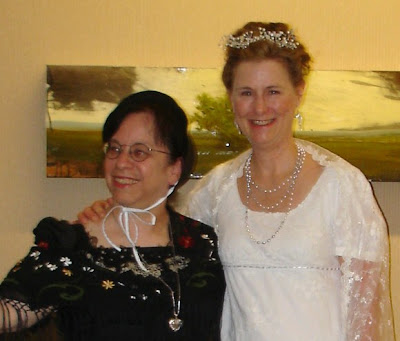 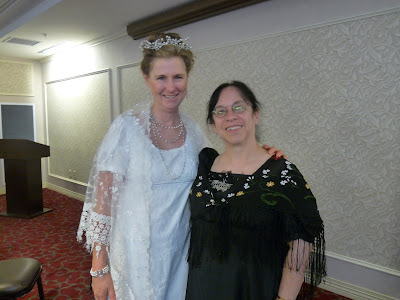 Syrie and me after the play

Monday.  Our hike.  We drove to the cottage, and then went on a walk to the Snohomish River, three miles round trip.  Rather a sultry day, so we were glad to sit on the turfy green grass under trees and have a picnic. 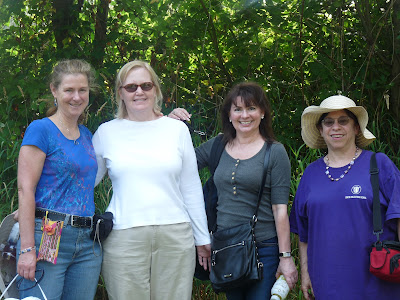 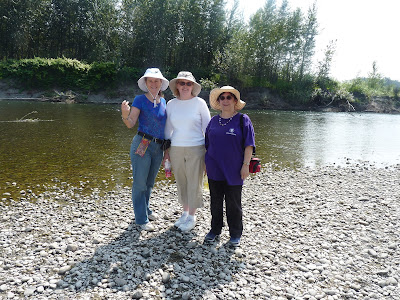 By the Snohomish River

Later we went back to Laurel Ann's and had a repeat of our first dinner there, which was perfect, as it could not be surpassed!  The only variation to the salmon and fresh corn was that there was fresh asparagus too, and as we'd finished the pie we had fresh Rainier cherries and chocolate digestives instead.  Syrie and I then fast-forwarded through the Emma Thompson Sense and Sensibility to get a bead on "our" characters in "Austen Assizes," the play we've co-authored for the Brooklyn JASNA AGM in October.  Imogen Stubbs played Lucy (we really noticed the expressive usage of her sly eyes), and Harriet Walter was Fanny Dashwood (made me realize I really am going to have to dress up more...). Then back to Julie's house and a final frolic with my darling new friend Byron before bed, and flying home Tuesday morning... 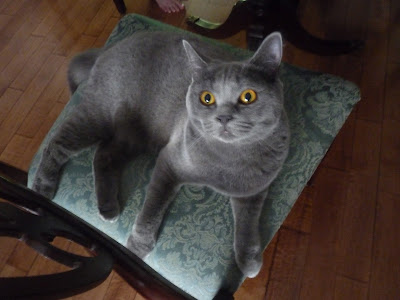 The Boy Byron.  A very fine cat indeed, though possibly the poet is sunk in the athlete. 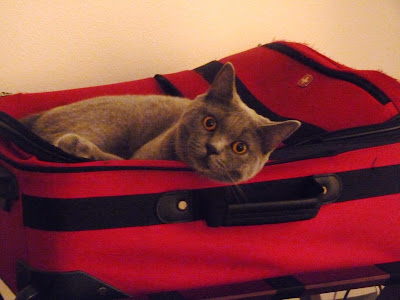 Coming home with me in my suitcase, Byron?
Posted by Diana Birchall at 4:08 AM 6 comments: