The Austen Assizes and the Brooklyn Bridge 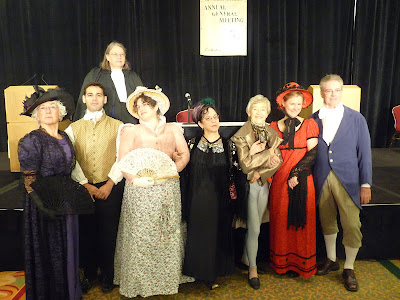 Cast of "The Austen Assizes," by Syrie James and Diana Birchall

No time and only a few waning shards of energy left with which to blog, but "The Austen Assizes" was a huge success. Several hundred people howling with laughter for a solid hour, never heard or saw anything like it! The actors were hilarious, divine - everyone in the other panel sessions could hear the constant laughter and shouts through the walls the whole time! Walking on air...Literally, for after the play I went and walked across the whole entire Brooklyn Bridge. An unparalleled, exalting day. I'll only share a few top pictures now, and tell the whole story more fully later. 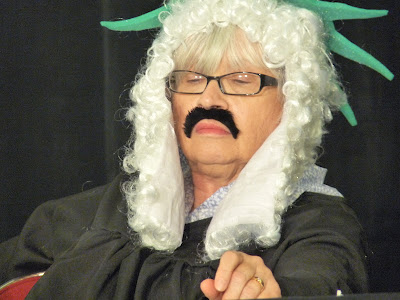 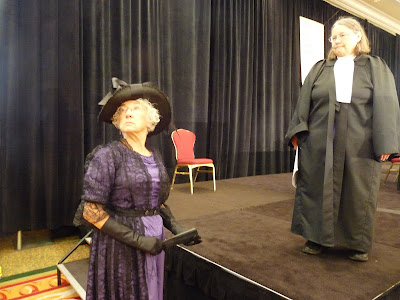 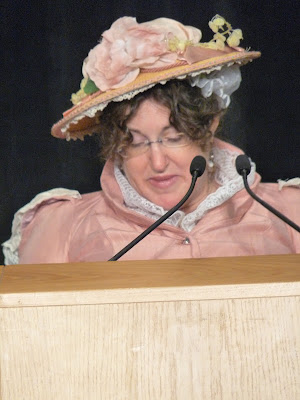 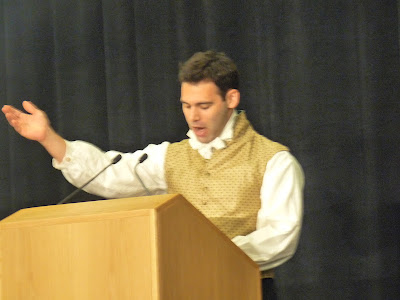 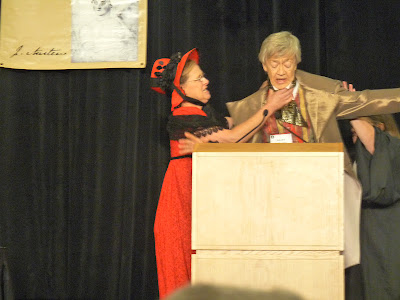 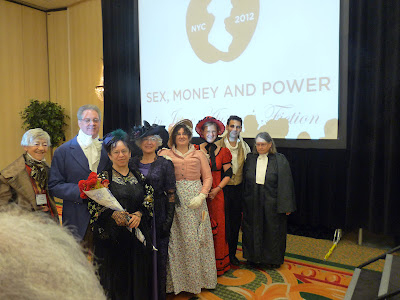 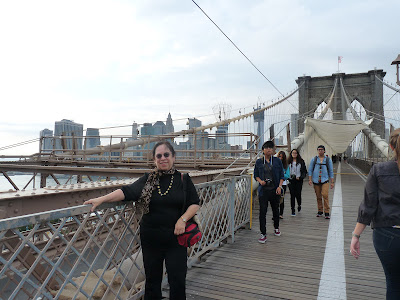 Me on the Brooklyn Bridge 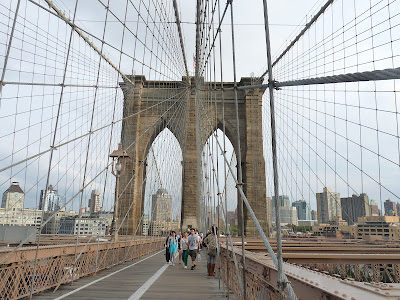 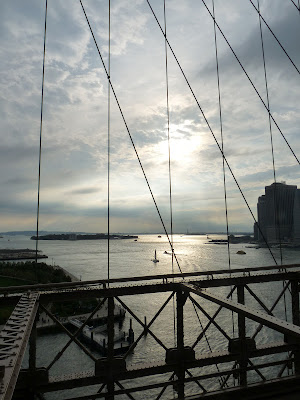 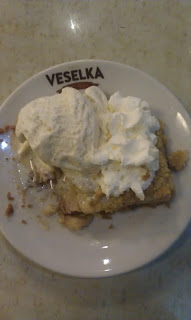 
My first report from the JASNA conference in Brooklyn.  Every minute busy, exciting, packed, stimulated - never enough sleep, body aching from hauling up subway steps and walking on punishing concrete. In the debate that's pressing to my contemporaries, the die-hard New Yorkers swear this is the only place in the world to be old, with the cultural offerings and services, you live in an elevator building and take cabs. The other group (into which I fall) says that this is the last place you'd want to grow old, it's overwhelmingly physically punishing and assaultive.  Picture me trekking back from Brooklyn to the Village every night after an incredibly packed day, dragging my heavy bag, knee aching, huge young people bashing into me so that I feel like I'm in one of those games where you have to dart to avoid collisions, and getting the worst of it. Moreover it's mortifying to remember that only a mere few visits ago I was one of the darters myself!

But the conference itself is sheer joy.  There's something about being part of a far flung community for thirty years, coming together yearly, keeping in touch via internet; it's all explosions of "THERE you are!" and "Eeek!  You are the very and only person I have been wanting to SEE!"  Here, I say in all modesty, I'm known to all and it's the only niche in my life where I approach (dare I say it!) mini-celebrity status.  And now, burgeoning out with my new play ventures, there's a walking-on-air exalted feeling about it all, which quite counteracts the ache in my subway-stubbed stumps.  So, on with the picture show... 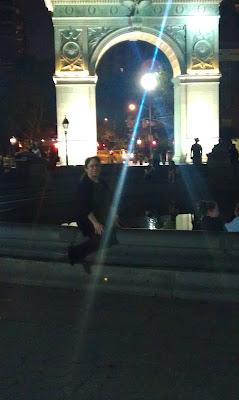 Washington Square Park at night.  The same spot where my icon picture was taken in 1962. 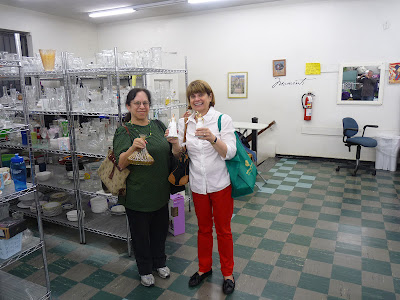 Thrifting with Hunter Elementary School friend Debbie on the Upper East Side.  The kids in us definitely come out! 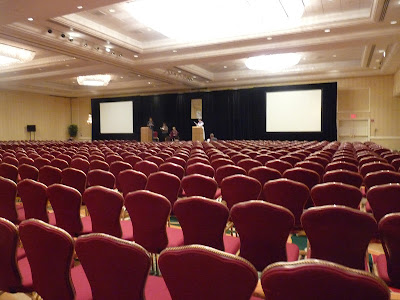 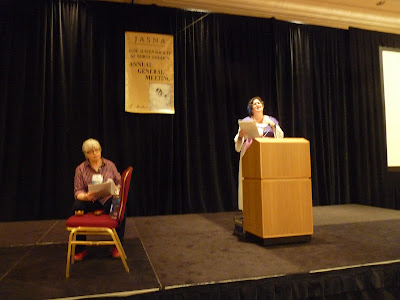 In rehearsal.  Joan Ray as the Judge, Miriam Fuller as Mrs. Bennet 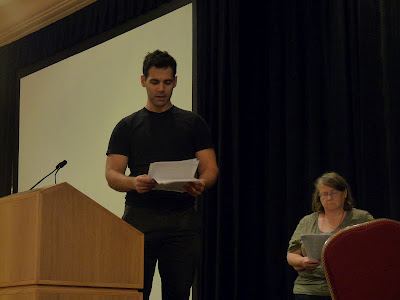 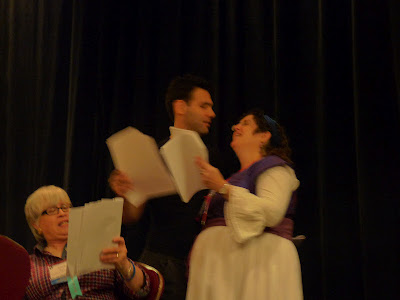 Jonathan and Miriam - Willoughby and Marianne 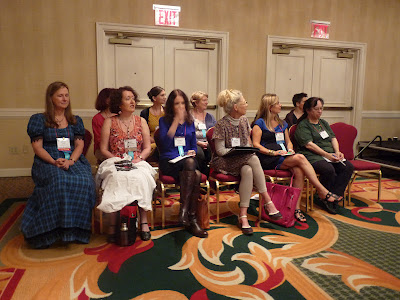 A dozen Austen authors at the publishing panel.  My, we look glummish! 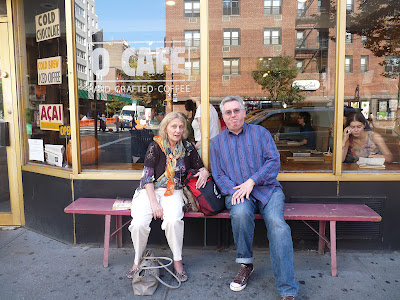 Ellen Moody and Paul, breakfast in the Village 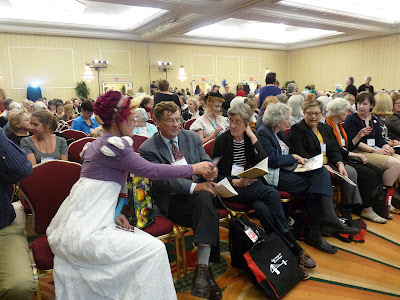 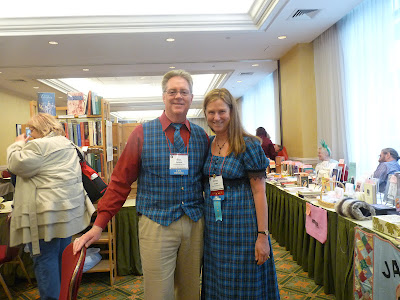 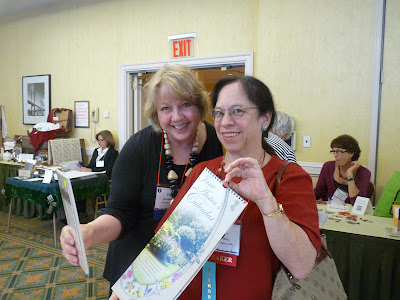 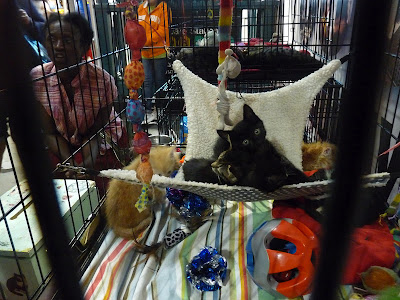 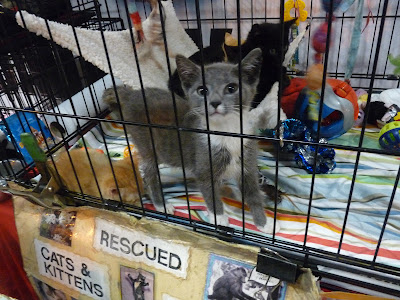 Oh, would that I could take you home!

Notes on the rest...Anna Quinlen's talk was magnificent, witty, deep, intelligent, readerish, moving.  From reading Jane Austen, she said she learned﻿ that "Some women could live forever."

Other break-out sessions, Tim Bullamore,  London obituary writer, also editor of Jane Austen's Regency World Magazine, was witty; Miriam Fuller gave a rouser about "coded sexual indiscretion" in the novels.  And the day was rounded off with dinner in an excellent Italian restaurant, Queen, with a party that included by Elsa Solender (former JASNA President), humorist friend Gene Gill, simpatico Susan Schwartz, fascinating musical theater genius Amanda Jacobs, a group from Chawton House Library, and more.  Talk about stimulating conversation!  But that's life at this AGM.  Tomorrow is the play.

The weather is horrible.  Muggy, humid, foul, there are fleas.  You'd think it was Rome in August.
Posted by Diana Birchall at 11:05 PM 8 comments: