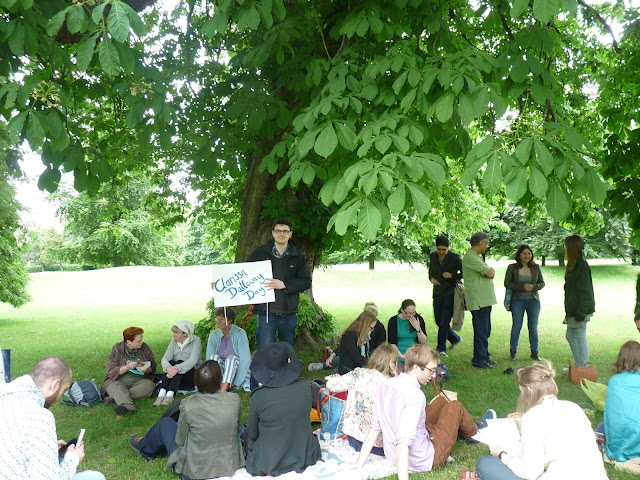 Left my bag at the nice b&b in Gower St., had a look at the English Sunday papers in their corporeal, not online, form, and then sallied out with my new Oystercard. The Virginia Woolf walk was to meet in Dean's Yard, Westminster Abbey, at eleven, so I went early.  Hadn't been to the Abbey since my first trip, 1968, when I took little Paul, so I went in for the Sunday matins service.  Only a handful of worshipers, despite the hundreds of tourists staring at the Abbey outside, but it was quite lovely, magnificent setting obviously, beautiful singing, and fun to see the church bigwigs processing in their scarlet robes.  When the service was over, I joined the Woolfians in the Yard. 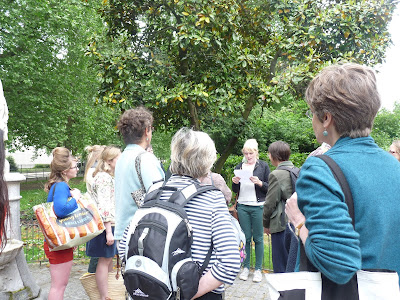 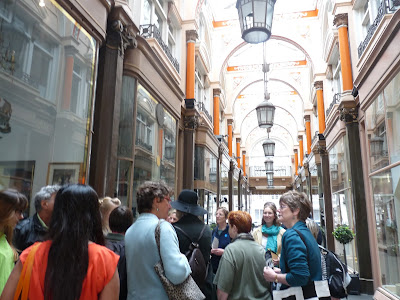 A couple of dozen people assembled, all wearing some green in honor of there being a lot of it in Mrs. Dalloway. The weather was nice for a walk, cool and refreshing, with gleamlets of sunshine.  Some grad students at London University and members of the Women's History Society and Literary London Reading Group had organized this, so it was a nice mix, and everyone was relaxed, enthusiastic, and friendly. The whole walk took over two hours, and was a fantastic walking tour of central London, for starting at Westminster it went past Buckingham Palace, along Bond St, and all through Regent's Park, which was very beautiful. We stopped half a dozen times along the way for short readings from Mrs Dalloway at the appropriate places, and finished with a picnic and book discussion under an ancient spreading chestnut tree. Simply lovely, and such a peculiarly English welcome to London. 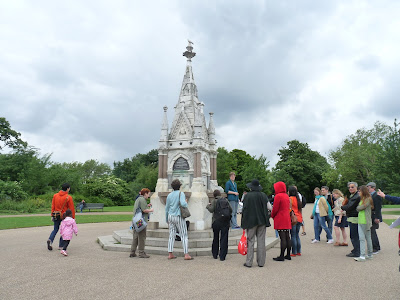 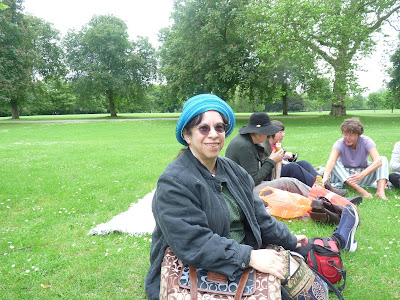 I'd reread Mrs. Dalloway in preparation, and though I'm not much of a fan of Woolf's novels (it's the letters, diaries and essays I love), there's some beautiful writing and evocations of London in it, which were thrilling when well read on the spot.

"It was June. The King and Queen were at the Palace. And everywhere, though it was still so early, there was a beating, a stirring of galloping ponies, tapping of cricket bats; Lords, Ascot, Ranelagh and all the rest of it; wrapped in the soft mesh of the grey-blue morning air, which, as the day wore on, would unwind them, and set down on their lawns and pitches the bouncing ponies, whose forefeet just struck the ground and up they sprung, the whirling young men, and laughing girls in their transparent muslins, who even now, after dancing all night, were taking their absurd woolly dogs for a run; and even now, at this hour, discreet old dowagers were shooting out in their motor cars on errands of mystery; and the shopkeepers were fidgeting in their windows with their paste and diamonds, their lovely old sea-green brooches in eighteenth-century settings to tempt Americans..."

She's got that right.  I could use a sea-green eighteenth century brooch right about now.  My rhinestones are 1950s, not 18th century, and this one's my most sea-green: 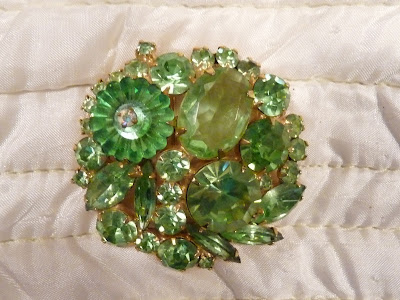 "...and she, too, loving it as she did with an absurd and faithful passion, being part of it, since her people were courtiers once in the time of the Georges, she, too, was going that very night to kindle and illuminate; to give her party.  But how strange, on entering the Park, the silence; the mist; the hum; the slow-swimming happy ducks; the pouched birds waddling..." 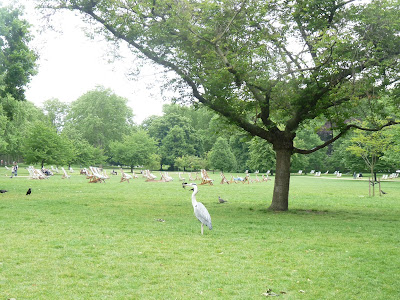 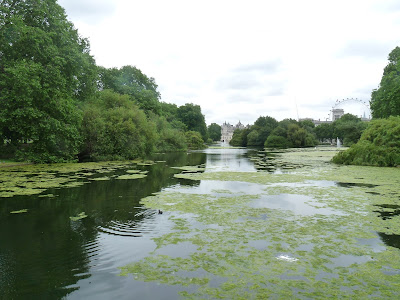 Here's a blog one of the organizers wrote about the day, I'm glad to see myself in the last picture:

Afterwards, as I hadn't brought picnic food, I had myself a lovely lunch in an outdoor cafe in the park. An exquisite egg mayonnaise sandwich, fresh chocolate cake, and tea. Everything was excellent; in the U.S. the equivalent would have been dreck.  Can't understand why that is so, but it is. Then I walked in Queen Mary's Garden, and as legs were getting tired, I took a bus along Euston Rd. using my nice Oyster card most of the way to the Gower St. Hotel. Retrieved suitcase there and wheeled it to the George, where I'm staying tonight. (That's my usual familiar b&b, and it's £60, a lot cheaper than the Gower.)  Now I'm resting on my bed, looking out at the trees and tennis players in the Cartwright Gardens evening sunshine. 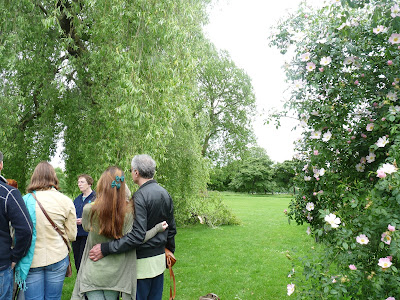 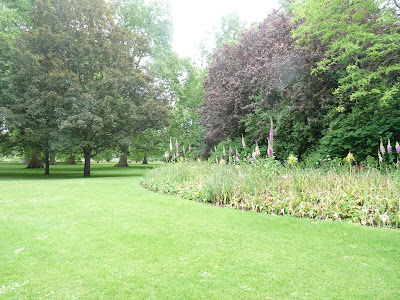 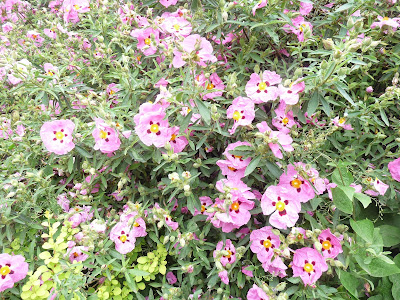 "There were flowers: delphiniums, sweet peas, bunches of lilac; and carnations, masses of carnations. There were roses; there were irises..."

London is looking lovely! Well kept, plenty of tourists but not exhaustingly pushingly crowded like New York.  Very multinational, everybody looking happy, as if they're having a good time, and know they're lucky to be there.  I know I am.
Posted by Diana Birchall at 5:59 PM 6 comments: 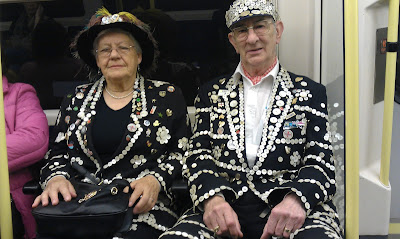 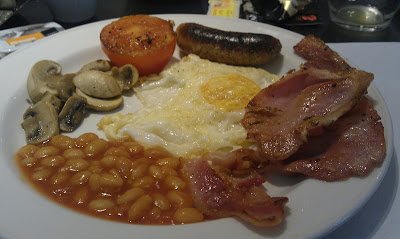 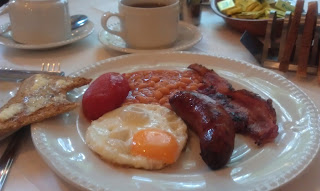 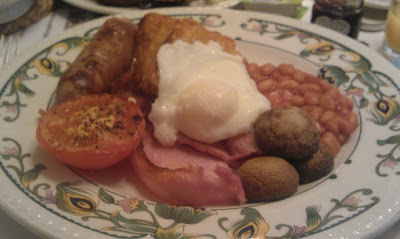