Visit to the Getty to see "A Royal Passion: Queen Victoria and Photography" 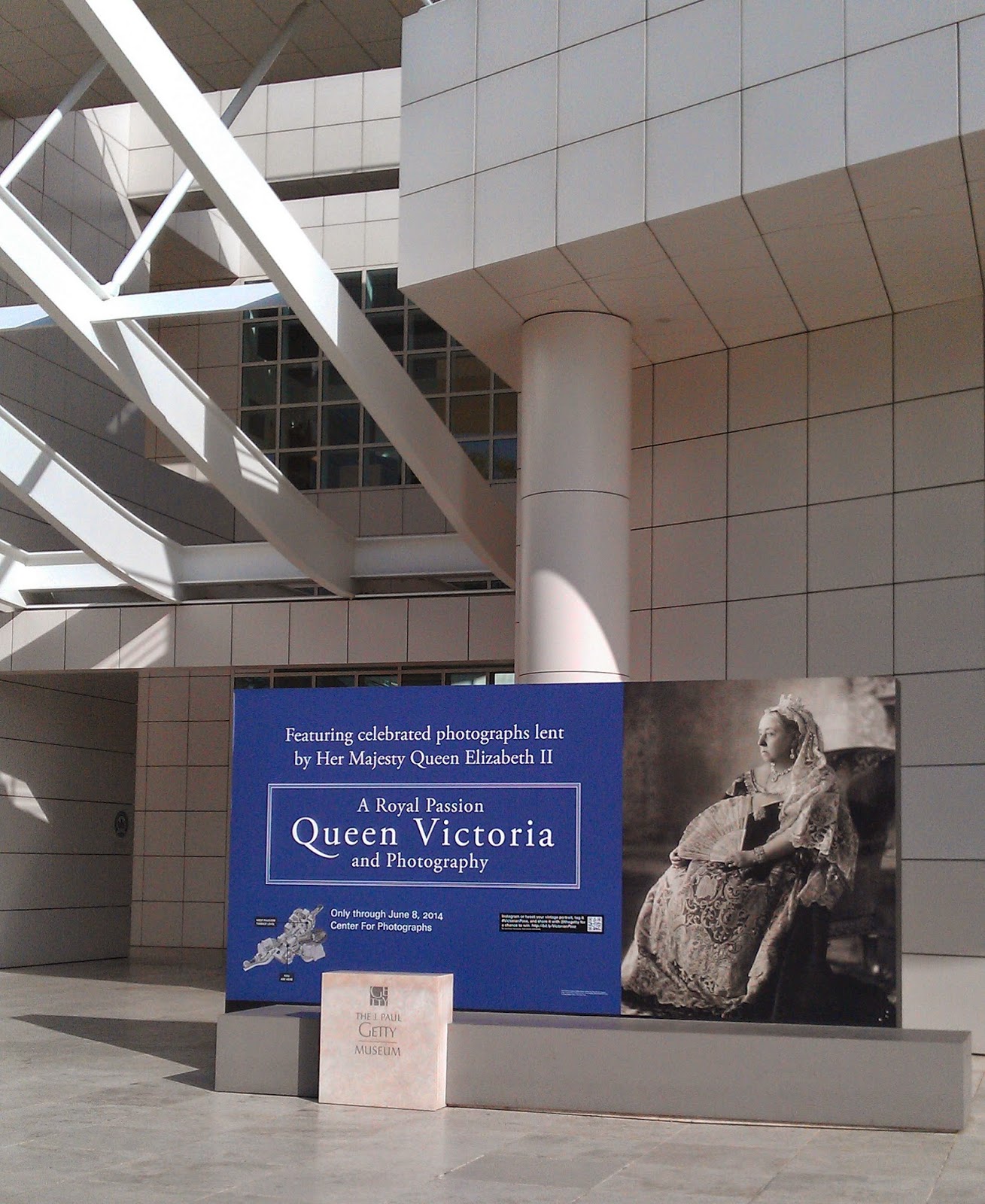 I waited until rather late in its run (it closes June 8) to visit the exhibit "A Royal Passion: Queen Victoria and Photography" at the Getty, figuring I'd go to the lecture by the exhibit's curator, Anne M. Lyden, formerly of the Getty and now curator of international photography at the Scottish National Portrait Gallery. Getting anywhere in L.A. is penitential these days - the 405 is being reconstructed and there are complicated detours, plus Sunday turned out to be not the best day to be at the Getty, which was a mass of tourists. I got there gnashing my teeth with tension, as I always do after encounters with Freeway L.A., and it takes some soothing to come down from that state. When I arrived at the screening of "Belle" feeling that way, the film quickly took me into another world, and made the expedition worth it. I'm not sure the Victoria exhibit came up to that. I'm all for museums and lectures in London and New York, but the reasons why I try never to go anywhere in L.A. all revolve around the exasperating tensions that come with being cut off by Mercedes tanks at 75 mph. 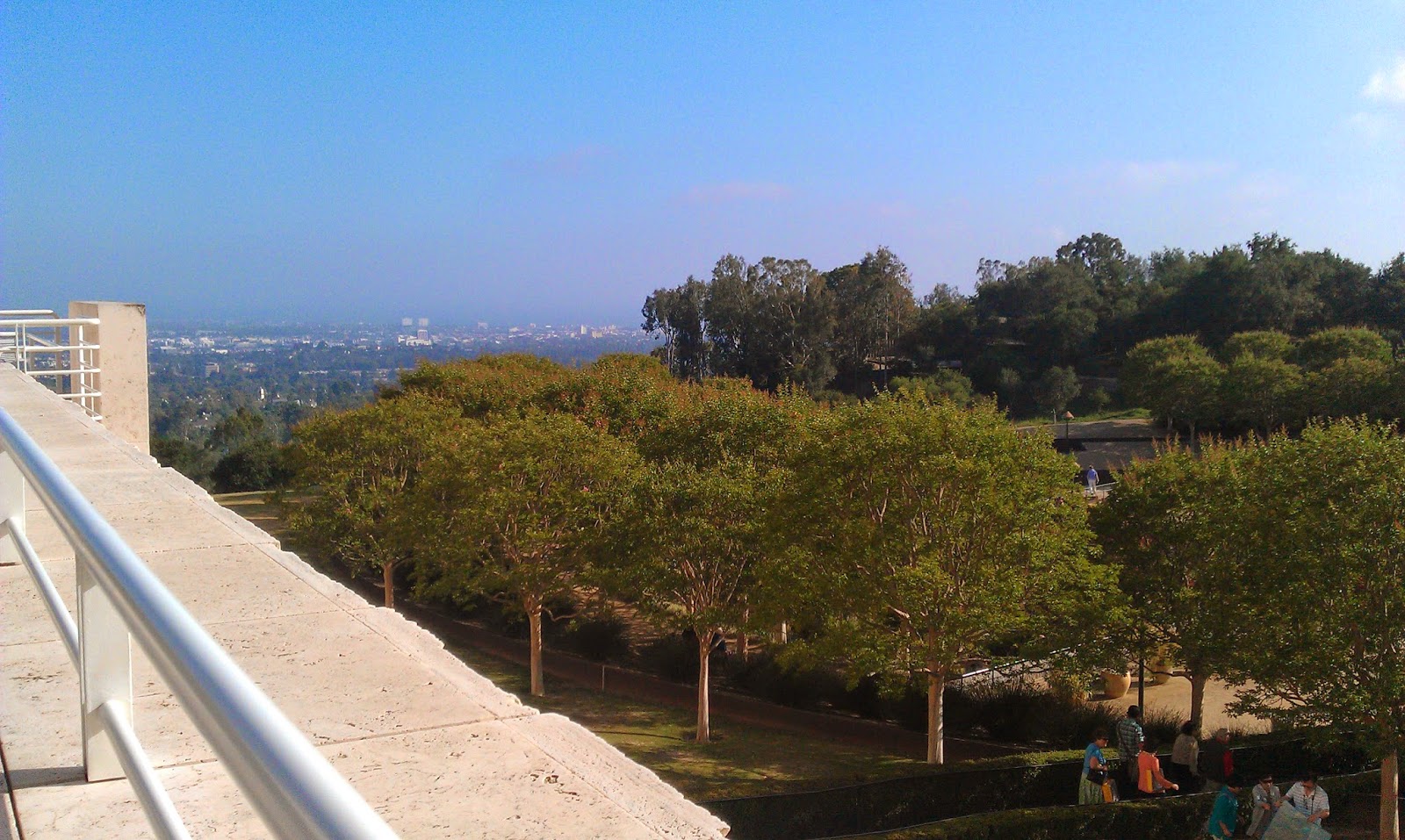 And after all, the lecture itself was rather disappointing. It introduced and accompanied the photographs but was a very basic overview.  I was familiar with most of the images shown in the slideshow, though I did enjoy several domestic scenes I'd never seen before, such as the one (below) of Victoria holding a picture of Albert she intended as a gift for him. Yet I must admit I came away feeling I hadn't learned very much. Despite the familiarity of the material, there was still plenty of room for intelligent observations and commentary that would have helped us to see more, but this was not given. You can tell when a lecturer is only too aware she's talking to Californians, and says things like, "Westminister - that's the seat of government, you know," and includes pictures of Kate and Wills. Really? 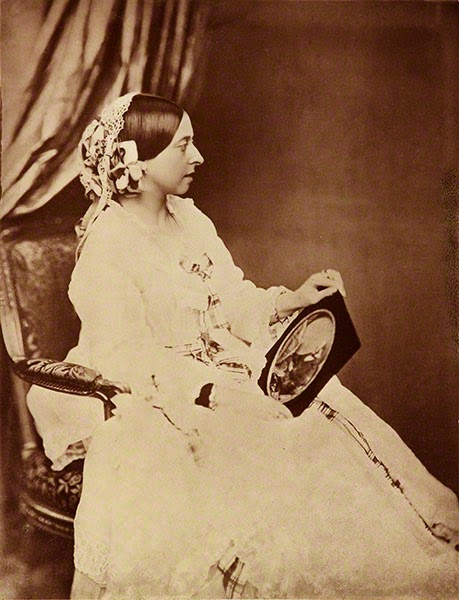 Still, when I visited the exhibition rooms afterward it was an impressive collection of picture indeed, and nice to see them in their "real" form, shape and size. The commentary had at least placed them in time sequence, yet it was hard to actually study the pictures to try to discern more for myself, as many were so small and not easy to see, hung high in some cases. It wasn't the best arrangement for small photographs, which a single other observer can block completely.

What I ended up liking most was the related exhibits, such as pictures from the Great Exhibition and the Manchester art exhibition of the 1850s. Some of the faces shown - poor people, military, ordinary families - were fantastic, a true revelation of the past. It was also wondrous to see rare photographs of famous London sites and buildings as they looked in the mid-19th century, empty spaces without cars. These panoramas were adjacent and incidental to the Victoria exhibit, with no connection  pointed out in any comprehensible way, but at least they were there for the eye to see. 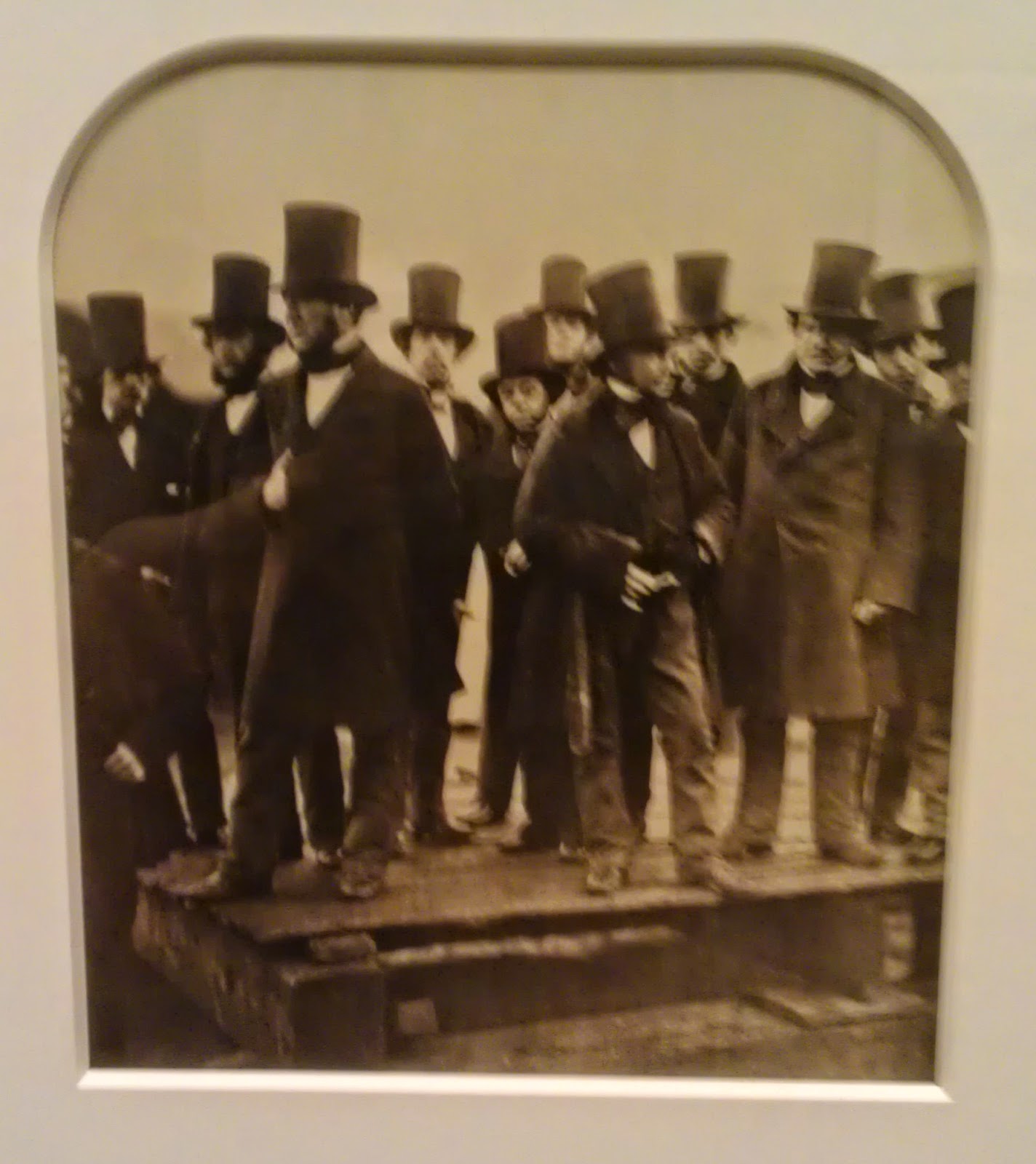 My favorite picture in the exhibition: the monkey face of the man in the center is so arresting!


Yet no elating, elevating impression exuded from this exhibit.  Noisy Sunday strollers wandered through, talking not of Michelangelo. The guards were so militant you felt unpleasantly that they were waiting to pounce, barking at everyone who pulled out a cell phone camera as if they were planning destruction. (I thought of the lovely Metropolitan in New York which not only permits you to take pictures of anything in their permanent collection, but has even released hundreds of thousands of images!)  The many familiar photographs of Victoria and Albert were repetitive, though it was nice to see them in the original, and the array of cartes de visites was particularly impressive, containing shots I'd never seen.

The exhibit didn't seem to have made up its mind if it was about Victoria and Albert as photographic subjects or about early photography itself; there was no clear thematic unity that I could discern. I was feeling vaguely dissatisfied until I noticed the book of the exhibition, A Royal Passion, Queen Victoria and Photography, by Anne M. Lyden. And there was what I'd been wanting to see - stunningly perfect reproductions of the photographs, much easier to see and examine, all the rare pictures you wanted to linger over, with some explanatory text. Since this was selling at half price, I nabbed a copy, and I think this is where I will finally find my exhibit satisfaction.  Passion was the exact element that was missing from the lecture and exhibition, but it may be on the page. 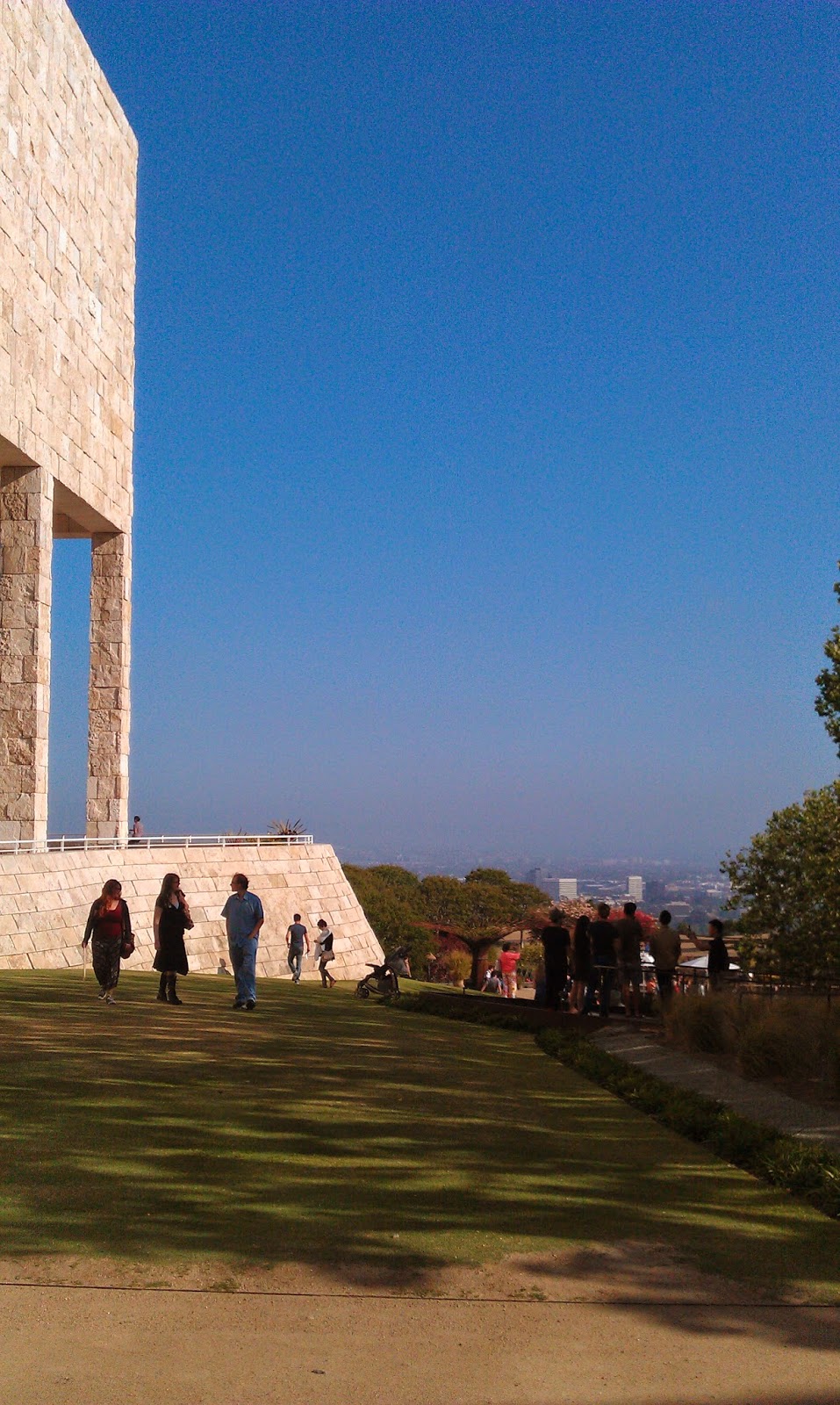 I took notes on the lecture and reproduce them below.


The slide show began with the 1857 Osborne picture of the whole Royal Family, baby Princess Beatrice six weeks old, and an earlier photograph from the mid 1840s with the Princess Royal as a baby. Victoria and Albert were acknowledged for having grasped the archive concept so that there were 20,000 pictures in their private collection by the end of the reign. Most of these family photos were meant to be private, or only shared with friends and family (like the Duchesse de Nemours, or Prince Leopold), and they are intimate and homely. For public consumption there were portraits like those by Winterhalter, presenting the Royal Family in a far more glamorous and regal light; some photographs were used as the basis for paintings.


One photograph by William Kilburn showing the Queen and five of her children in 1852 was disliked by the Queen because she had her eyes closed, and she defaced the picture, rubbing herself out. Another version of it has her turned to the side, wearing a bonnet so you can't see her face. "Mine was horrid but the children were pretty," she wrote about it.


The first picture of the Queen after her accession in 1837, addressing her council, showed her wearing virginal white, and she disliked the picture as inaccurate. A full length Winterhalter of 1859 was made her official likeness, "full length of me in grand costume," she wrote. For a bust by Alexander and William Brodie at the National Galleries of Scotland she wanted to "look Scottish," and wore a thistle, but the sculptor committed suicide and his brother had to complete the work. Then there's the Roger Fenton photograph of 1854, with Victoria in a plaid shawl, scissors hanging from her chatelaine; and a family group with her mother, which was sent to Leopold. Another 1854 photograph, by Bryan Edward Duppa, shows Victoria in profile, holding a picture of Albert, meant as a surprise for him. Fenton became a favorite family photographer and Victoria commissioned him to hand colour some of the pictures for a natural look.


One Fenton photograph people often take for a wedding picture, as it shows Victoria in white looking soulfully at Albert, but it was actually taken in 1854, and they were dressed for a Drawing Room. Edward Henry Corbauld did the painted, idealized version, an early example of Victoria creating her own image. In 1857 the carte de visite became popular, with the famous (Dickens, Nightingale, Winterhalter) having cards made, and Victoria commissioned cartes of her and Albert circa 1860, that sold like hot cakes. These images made her look very domestic and maternal, not threatening, as a female monarch might be taken to be. Though when Queen Isabella of Spain sent a grand portrait of herself, Victoria competitively had one made in very stately royal gown.


After Albert died in 1862 she asked William Bambridge to take images of the family in mourning around his bust, and for Bertie's wedding to Alexandra the family stood by the bust again. These images were released to the public, though not idealized. Such photographs became her public face. The famous one of her on her horse with John Brown near her, had the image of a second ghillie cut off, to make it seem that she was more intimate with him than perhaps she was. Later, after the Prince of Wales's illness in 1872, Victoria appeared in a thanksgiving portrait, in a startling costume with fur trim, quite unlike her familiar black mourning crinolines.


After becoming Empress of India in 1876 her portraits grew more imperial; the Bassano image of 1882 retouched her wrinkles, jowls, and slimmed her down. "God knows there is nothing to admire in my ugly old person," she told Vicky. Downey's Diamond Jubilee portrait of 1893 (painted in 1897), showed her all in lace and diamonds with a fan; the copyright was removed, and this image went viral - all over soap, chocolate, dishes.


One interesting image that was not in the slide show, I found in the exhibit itself, a daguerrotype where you looked through a scope, of Victoria in 1854, photographed by Antoine Claudet, in which she has ringlets and unusually has a rather pretty, almost Spanish look.

Here's the link to the exhibit:  http://www.getty.edu/art/exhibitions/victoria/victoria_photography.html 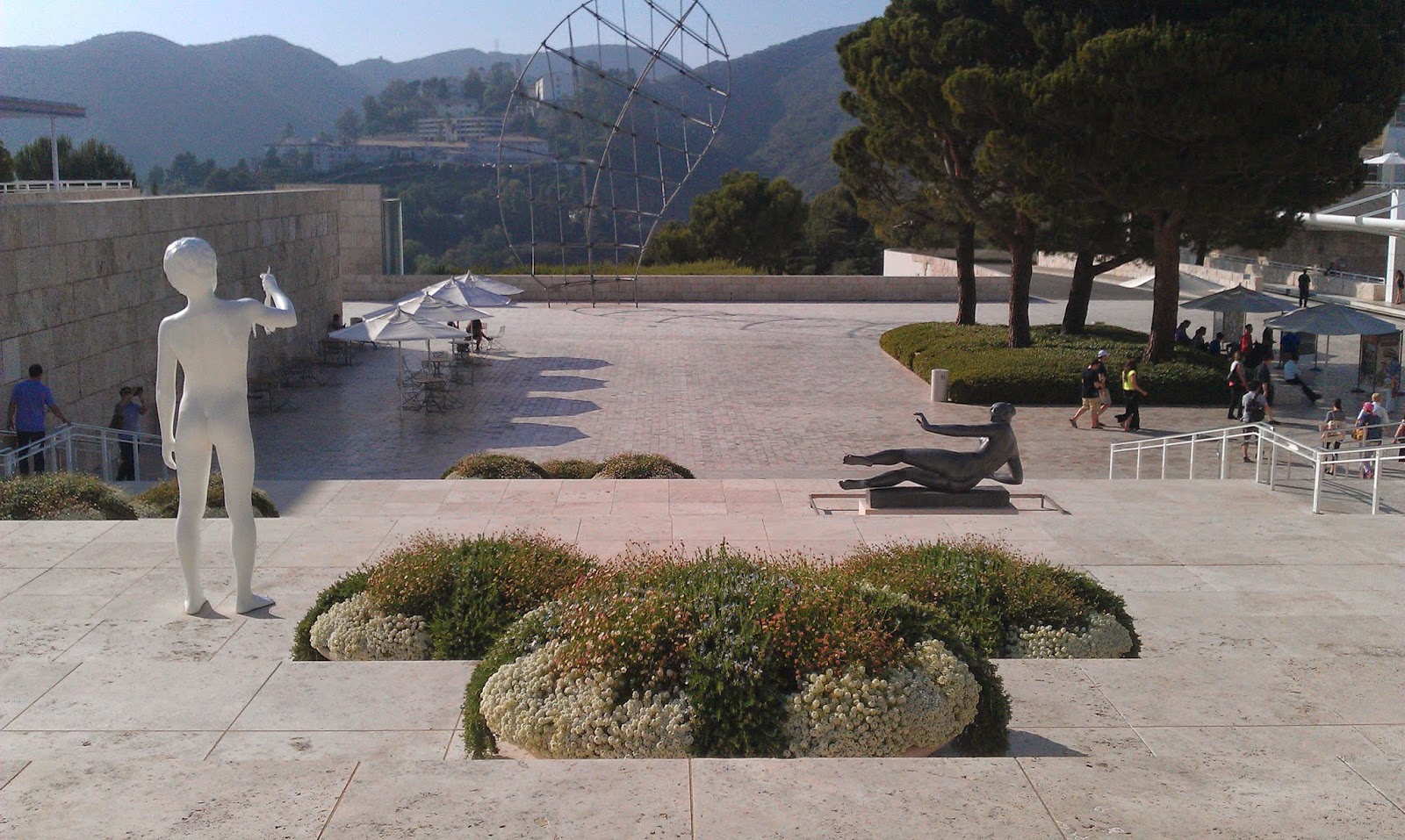