The Good, the Bad, and the Ugly in Current Austen Affairs

Our local JASNA-SW Jane Austen's birthday celebration at the Los Angeles Athletic Club was one of our most wonderful meetings in years. Great turnout, speakers, authors, food, good cheer. For many, the outstanding feature was a talk by Dr. Cheryl Kinney. She is a Dallas gynecologist as well as Austen scholar, who was co-coordinator of the Ft. Worth JASNA AGM, and is one of the best speakers I've ever heard. She's got it all: intelligence, wit, sparkle, liveliness, allied to serious knowledge. Listening to her you are learning while being diverted, and are aware that this is a remarkable woman as well as speaker. I took a few notes on her intensely interesting speech, and here are a few of the odd and alarming facts I learned about her subject, which was "A Dangerous Indulgence: Women’s Health in Jane Austen’s Time."
In Jane Austen's day, men used to make medical decisions for women. The women of the household did all the nursing, however. Women were not allowed to be trained to use forceps, yet midwives often knew more than doctors: for instance, in a cookbook of the era, in the back pages dealing with health matters, a midwife wrote about how bed linen should be changed to stop the smell of infection. This means that 50 years before Lister, women knew about infection.

Barber poles were white, and with a red stripe it meant the barber was also a surgeon.
Christie's auctioned off an 1810 condom recently, for L20,000.
Abortion medications were sold everywhere, and could kill you.
Douching could kill you too, as it was done with dirty water and could cause infection.
Mr. Woodhouse's medical advice was all good - London really was unhealthy! Bad water, typhus, plague, abounded.  VD was everywhere, spread by upper class men.
The Royal Navy spread clap (gonorrhea) due to stowaway prostitutes.
A lovely young lady at sea
Who complained that it hurt her to pee
Said the brawny old mate
That accounts for the state
Of the cook and the captain and me.


Women in Jane Austen's day had menopause at age 44. Women were bled once a month for menopause troubles, by an apothecary. One treatment involved leaving leeches in the vagina for hours. With cervical cancer, women simply rotted inside.
Giles King-Lyford treated Jane Austen in her last two weeks, and she improved during that time. He was one of four sensible thinking physicians, and took excellent care of her, apparently until others were brought in. In Austen's detailed observations of her illness she described Addison's Disease 30 years before doctors did.
Dr. Matthew Bailey may have written something about her illness in his private diary - but it is in family hands and they won't release it.
To hear a podcast of a talk Dr. Kinney gave on "Jane Austen and the Body" at the Chicago Humanities Festival, click on this link. Her thesis is that “Austen-itis” as the recurrent use of sickness, health, frailty, and injury to develop Austen’s characters, drive her plots, and establish the comedic side of characters’ suffering.


"Jane Austen turned herself into a physician whose patient was society." - Dr. Cheryl Kinney


THE BAD:  Death Comes to Pemberley by P.D. James 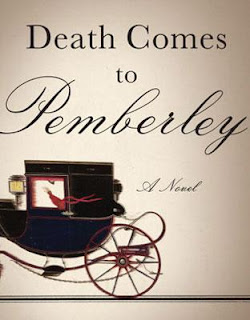 Oh lord. I thought to write a regular book review, just like a proper book blogger, but really I haven't the patience. This book was very much anticipated, since to have England's surviving grande dame mystery writer take on Pemberley, sounded an intriguing, possibly amusing prospect. But it's a disappointment, and I think the book will fail to please both Austen-lovers and P.D. James lovers alike. As one of the former category I was shocked to see an egregious error smack dab in the middle of page one. James calls Mr. Collins a nephew of Mr. Bennet, not his cousin. This may seem a very minor detail, but it informs you right up front and center that you are not going to be in the hands of someone who truly inhabits the world of Austen or cares about the details, so you are likely to be ceaselessly irritated; and it also distracts you from reading enjoyment as you sit there gobsmacked that an author as eminent and best-selling as P.D. James does not have a competent editor or copy editor!
Still, I moved past that, as it would be absurd to let one error put the kibosh on an entire book. Although there were other errors (as her continually describing the Hursts as splendidly rich, when clearly they were spongers), the book didn't turn out to be distressfully messy in that respect. Instead, James fell into another grievous and more serious error - she proceeded to recap and summarize Pride and Prejudice for almost the next solid fifty pages. This was done in a stilted, stupefying way that is incredibly tedious to anyone who knows the book, but also does Pride and Prejudice a disservice by making it sound so tortuous and dull that the P.D. James fans who aren't familiar with P & P would hardly be moved to become so!
Once this section is over, the mystery begins, and James starts to write in a more natural style. Unfortunately the mystery she now unfolds is so dim and low-key, the book is anything but an exciting page-turner. Wickham is drunk in the Pemberley woods when his friend Denny is shot. He is tried for murder. There's a turgid, complicated explanation at the end which I won't go into, but I can't imagine a non-Janeite understanding the half of it, or a Janeite believing it. There are flashes of nice descriptive writing in the woodland scenes, with James wielding prose in a masterly way; and her depiction of early 19th century jurisprudence is well researched and well handled. But oh, dear. If a neighbor hadn't given me this, I never would have read it to the end. P.J. James has amused herself with a stab at being a sequelist, but she is unlikely to amuse very many others.
THE UGLY:  "The Portrait" and Publicity 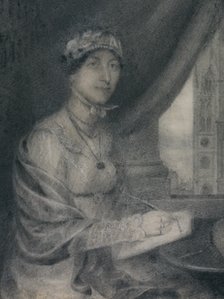 On December 5, The Guardian headline read, "Jane Austen Biographer Discovers 'Lost Portrait.'" It's a headline that's both sensational and misleading, as is much of the article. The facts are that this "new" portrait has been in a private collection for years, and was auctioned at Bonham's in March, when Dr. Paula Byrne and her husband acquired it. Deirdre Le Faye wrote about the portrait in the 2007 edition of the Jane Austen Society Report, calling it an "imaginary portrait," done perhaps as early as 1818, possibly by the Revd William Jones, who liked to portray authors he admired.
Byrne is quoted as saying, "When my husband bought it he thought it was a reasonable portrait of a nice lady writer, but I instantly had a visceral reaction to it." This seems extremely disingenuous. Byrne was not unaware of the Le Faye article, or that "Jane Austin" (sic) was written on the back of the portrait. Yet the Guardian present the sequence as: "when Byrne...with an Austen biography due out in 2013, was given a portrait of a female author acquired by her husband, Shakespeare scholar Jonathan Bate, at auction, she was immediately struck by the possibility that it could be a lost drawing of Austen." This beggars belief. Her husband thought he was just buying a nice lady writer portrait? Of course they knew that the picture had been bruited about as a possible Jane Austen portrait, real or imaginary. That's why they were at the auction in the first place!
Byrne says, "The idea that it was an imaginary portrait – that seemed to me to be a crazy theory. That genre doesn't exist." Doesn't exist? What was Jane Eyre doing, for instance, but drawing "fancy portraits" of people from imagination? Obviously it was a thing people did do. In fact, Le Faye's 2007 article is illustrated with several other "imaginary" portraits of Austen. But Byrne says, "[Le Faye] "thinks it is an imaginary portrait. I did try so hard to find one single example of an imaginary portrait, but nobody could find one – they just don't exist." And she asks, "Why would someone have wanted to draw her from their imagination, when she was not popular at that time?" Well, maybe after Austen's death, those who lost her wanted to remember her. How about that for a reason?
Myself, I like the portrait; it does strongly resemble pictures of men of the Austen family, with their long noses, though her nephew and first biographer's description specifically says her nose was small. But what she was doing sitting near a cathedral with a cat (she didn't like cats), and wearing a lot of jewelry, simply seems to indicate that it was not drawn from life.
Byrne is also quoted as saying, "The previous portrait is a very sentimentalised Victorian view of 'Aunt Jane,' someone who played spillikins, who just lurked in the shadows with her scribbling." But what does a Victorian portrait (she means the altered and engraved 1870 version of Cassandra's original sketch) have to do with the case? A late, altered portrait is not pertinent. That the one Byrne bought is of a distinguished-looking author, "very confident in her own skin, very happy to be presented as a professional woman writer and a novelist, which does fly in the face of the cutesy, heritage spinster view," may fit in with Byrne's own (ironically imaginary!) vision of what Austen looked like, but has absolutely no bearing on the question of whether the portrait was taken from life.
Upon buying the portrait, Byrne approached the BBC and they started filming a documentary about it that will be aired later this month. The unavoidable conclusion is that Byrne and her husband bought the portrait to use as part of a campaign to build herself up as the author of *the* new major biography, in a bid for major league fame. The documentary is publicity to showcase "their" discovery. But it's not their discovery. It's their calculated purchase. To me this resembles the "arsenic" story in which a mystery writer recently hypothesized, as a vehicle for book promotion, that Austen was murdered. It's all about the limelight and nothing but the limelight - for the authors. Jane Austen doesn't need it; they do. Funny how both of these stories turned up almost at the same time; it's the way things are done in book promotion now. Find some manuscript or picture, hook your book to it, the truth doesn't matter, all that matters is what you make the public think. The public, not thinking about it very hard, now thinks that Jane Austen may have been murdered with arsenic, and that a brilliant scholar uncovered a new portrait of Jane Austen. Let's buy their books! And they may be good books, too; I'm told the mystery is excellent. This means more sales of good books, so where's the problem? Truth, inconvenient truth, is the problem. Mind you, I have nothing at all against book promotion, in fact I support it enthusiastically. And I have nothing against discoveries. But when people deliberately say they discovered things they didn't, in service of promoting a book, yes, it bothers me. The portrait itself is very interesting. It makes the subject look rather like an early 19th century Virginia Woolf.
"Ambition! Ambition! Cromwell, fling away ambition. By that sin fell the angels."
Posted by Diana Birchall at 3:17 AM 19 comments: