A Toronto Memorial in May

"Kind, kind and gentle is she
Kind is my Mary." - Old Scottish song 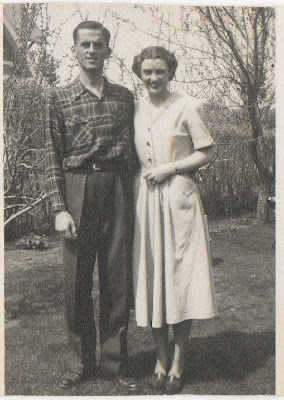 Only three weeks after my mother-in-law Vivian's death, and Peter's and my trip to New York, Paul and I flew to Toronto for the beautiful memorial for another very dear relation, my first cousin Tim Rooney's wife of sixty-two years, Mary Elizabeth Rooney (nee Carlisle).  With my mother's death last January, this forms a triumverate of women in my family circle of that generation, whom it's hard to believe could ever be gone.  Mary was so special, so life-affirming, so gentle, so smart and understanding, that it's hard not to fall into hyperbole in writing about her, but Mary herself well knew Jane Austen's saying "Pictures of perfection make me sick and wicked."  So I won't even attempt a description, but will only say that her family, Tim and their five children, and grandchildren, were lucky beyond compare to have Mary as the center of their universe.

Mary's parents were early settlers in Peace River, northern Alberta, which was frontier country when they arrived in 1914; Mary was born in 1923, but her father died when she was small and her mother worked to support her, becoming the first woman in Canada to be appointed Clerk of the Court and Sheriff.  Mary has written about her early Peace River days in a lovely, privately printed book. 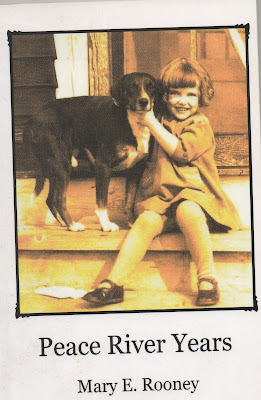 Tim and Mary were married in 1950, and he was a mathematics professor at the University of Toronto - now by far the most senior member of the department.  Mary among multifarious occupations, interests, and the raising of her five children (Frank, Elizabeth, Katie, John, and Jim - and there are grandchildren, Frank's son Patrick, stepkids Claire and Aiden, and Katie's sons Casey and Jamie), deeply loved all things beautiful and was a beautiful artist.  There exists an awe-inspiring book of photographs and memories from the group of women artists she belonged to for more than forty years, who met and painted year round, often in a cabin at Lake Muskoka.  Kae, her dear friend and fellow artist, spoke movingly at the memorial, as did members of her family. 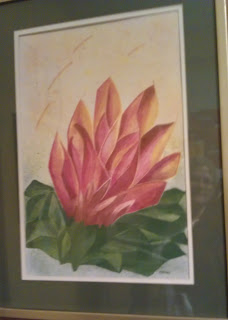 A painting by Mary (courtesy Elizabeth Rooney)﻿
Geographical separation meant that our family visits were few, but much enjoyed and greatly cherished.  We thought there would always be more, but there comes a time when trip numbers are finite.  Tim and I first really got together when I started working on my biography of our mutual grandmother, Winnie (Onoto Watanna, University of Illinois Press, 2001), and we had a flurry of memorable visits during those exciting years.  Since he is twenty years older than me, grew up in Winnie's home, and has to this day the most incredible steel-trap mathematician's memory, I used to follow him around with a notebook, scribbling down his reminiscences! After the book came out I gave a talk at a Women in Western History conference at the University of Calgary (Winnie's papers are held at the university library), and Tim and Mary came and helped me celebrate "bringing Winnie back home."  We also went to Num-Ti-Jah together, the wonderful old lodge on Bow Lake (near Lake Louise), where Winnie had visited in its early days. 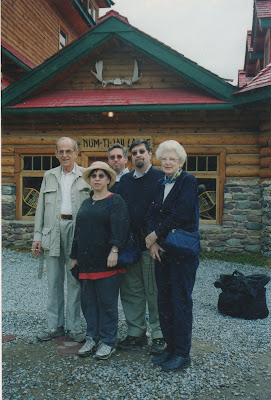 Tim and Mary with me, Peter and Paul at Num-ti-Jah

It would be impossible for me to do justice to the history of our very happy cousinship, which was particularly important to us, as Tim and I were both only children, and I had grown up knowing nothing of my father's family.  Tim told me so much, helping me to know and discover that family.  Mary was hardly less interested than he was, and did as much to create this family magic, which went beyond my book and into our lives.

No, all I can do here, is tell about our Toronto visit...which, though it was so sad, was a good time to be together. 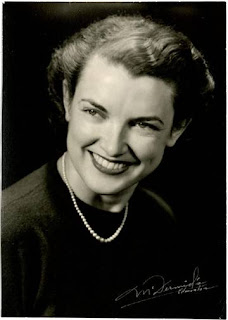 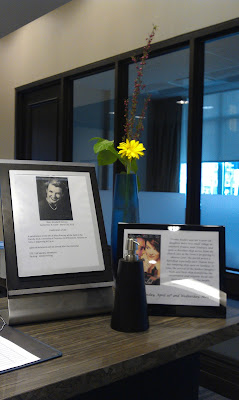 Mary's picture, at the desk at their retirement home 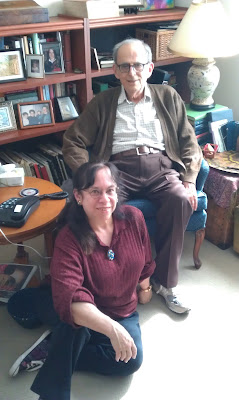 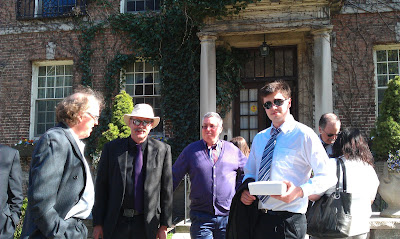 After the memorial at the University of Toronto Faculty Club﻿ 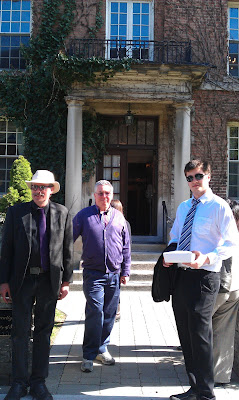 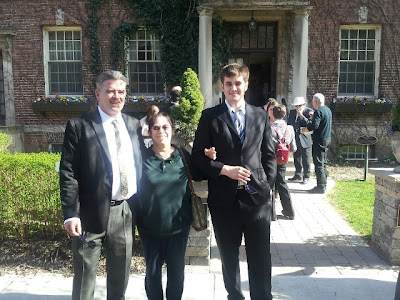 Jim, me and Jamie 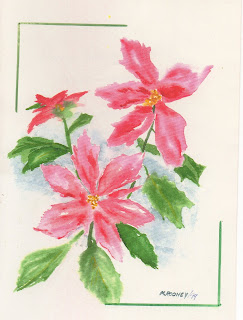 Mary's poinsettias always came at Christmas...
While in Toronto, I was able to see friends as well as family, and a Pifflefest was organized.  Piffle is an online group originally derived from the Lord Peter Wimsey group devoted to Dorothy L.Sayers, but Piffle was for general chat, and eventually split off.  It's complicated - but it was in its heyday a truly sublime social group, whose members "piffled" on several continents.  We've had many pifflefests in the U.S., Canada, and England, and a few yet further afield (I think there was one in a Borneo airport once).  It's a venerable group, I've been a member since I think 1999, and even though it's necessarily dwindled somewhat as other internet forces like Facebook have taken over, we are still friends.
﻿ 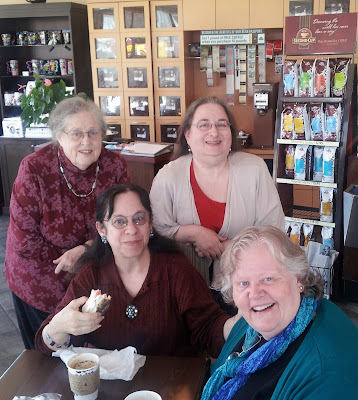 Many of us have "noms," taken from the Lord Peter "corpus," and mine is Miss Schuster-Slatt from Gaudy Night.  I have met each of these pifflers on several previous Toronto visits, and they are, left to right, Suzanne ("Figment of a fevered Imagination"), Miss Schuster-Slatt, Shayna ("Mrs. Forrest"), and "Just Jane." 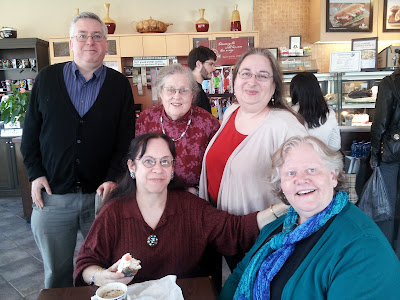 Here we are joined by Paul, at a Second Cup in a Jewish neighborhood.  We were able to procure bagels and lox in a nearby bakery
At a good Pifflefest, talk and food reign supreme.  What did we talk about? What didn't we? I was triumphantly reminded once again that a good old fashioned Pifflefest is like no other conversation. It is enthusiastic, curious, friendly and excited. Jane told about a lobster that turns off its brain in adolescence, and we decided to meet in London. Library school, travel, teaching, cruises, Judaica, the selfless act of Figment's granddaughter, age 13, in cutting her hair for sick children who need it. How age and infirmities cannot keep indomitable plfflers from piffling all over Europe and continents beyond. Berlin, reduction of benefits, rhinestones, iPads, books thereupon, mysteries, writing projects, cats, senior homes vs. own homes with stairs, Marrakesh, Cambridge, Chicago...that only scratched the surface of the topics.
Afterwards we visited at Jane's and Figment's lovely homes briefly, but even that wasn't all the friendly socializing...Paul and I were joined by another friend, Claire from the Girls' Own list, whom I've known for years.  She is godmother to our cats, and I've even stayed in her northern lake cabin!  But we've never actually met in person before, so this was a great occasion.  We had cider and continued the piffling.  After she left (as she was just off the plane from Edinburgh), Paul and I thoroughly enjoyed our last Toronto meal at Mt. Everest on Bloor Street - Himalayan and Nepali food, yum!﻿
﻿ 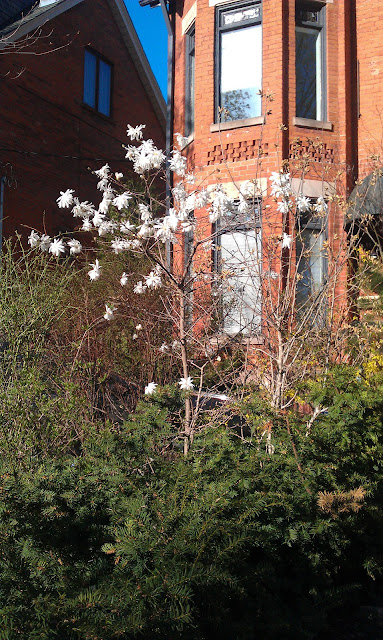 A house on Figment's block.  I wonder what the white flowering tree is,
they're in bloom all over Toronto this week.  Does anyone know?
Posted by Diana Birchall at 3:26 AM 2 comments: