The Cats Go to the Vet (Alert the Media!) 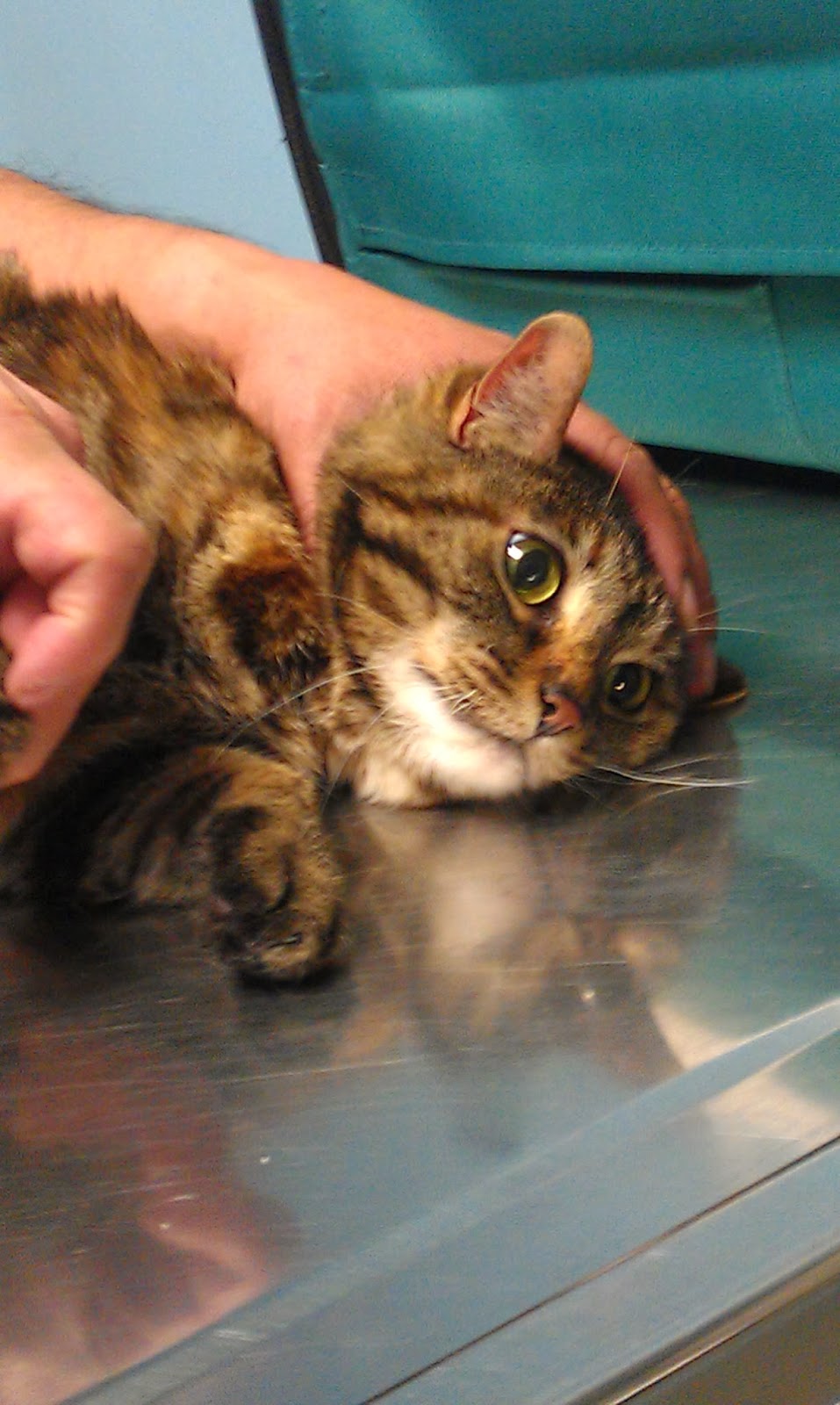 Pindy being examined - a study in beautiful resignation
It was high time. It was past time. It was two and a half years since we took the three cats to the vet. We kept putting it off and off and off, because they were quite well, and because wrangling the three of them into their three cat carriers is a chore beyond the three of us humans - we are no match for them. Peter recuses himself, because he is so tender-hearted where the cats are concerned, he can't bear hearing even an unhappy squeaklet. And it had to be done, because Paul starts a new librarian job tomorrow and won't be available to help me wrestle moggies for months.
Help me? He did the whole thing. I tried a feeble method, putting treats in the carriers, and when Marshy stuck her head in to get one, I tried shoving her in, but that ended in the cat being twenty feet away and on full alert. We turned a carrier on end, Paul picked up Pindar in his arms, dropped her in and slammed down the door. One down. Somehow he swooped Marshy up in his arms too, and once he had her firmly, he gave her the same treatment. Two down. 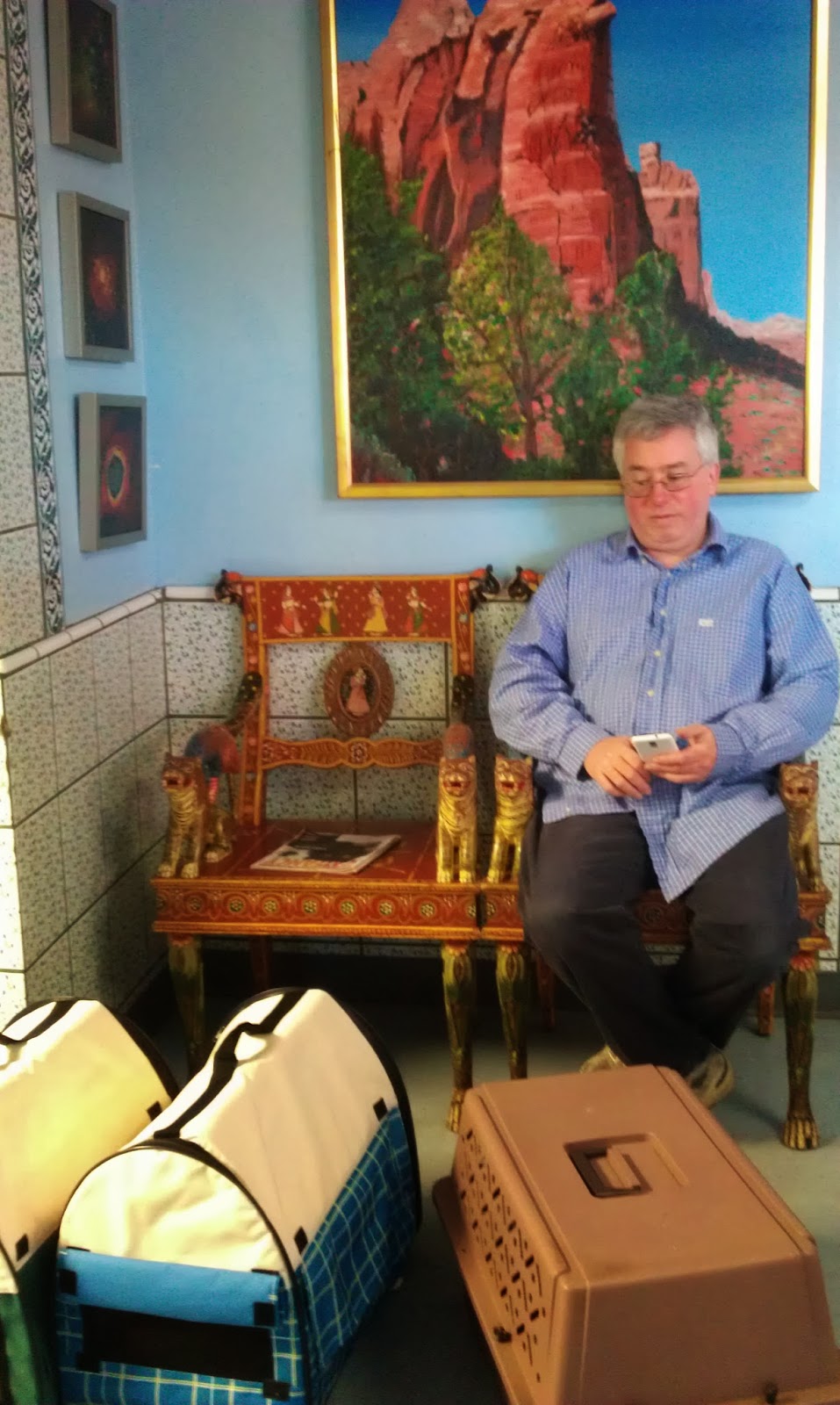 Paul and cats in waiting room
That left Catullus. After being chased all around the house, she cagily took refuge behind the couch. I moved the couch, she ran out onto the terrace, and Paul trapped her there. Already exhausted, we carried the cats down to the car, and drove to the vet's, less than a mile, with Pindy crying hard all the way. It's a cute little cabin-like office, a sort of Venice hippie place, that's been in business forty years, and is full of souvenirs of the vet's travels. They're very nice people and charge very little. They also don't take appointments; you bring in the animals and wait. We've always been lucky going in late afternoon; no one was ahead of us, and we brought the three catties into the examining room right away.


﻿
They never scratch anybody, but just assume poses of pained but passive resignation. Limply, they were weighed, and to our surprise, the short haired but firmly muscled Alpha, Pindy, out-weighed fat furball Marshy, at 14.9 pounds to Marshy's 13.10. Tully looks nearly as big, but it's all fur - she only weighed 11.12. Their nails were cut, and then one of the vets, a pleasant woman, came in to examine them one at a time. She pronounced them all very healthy, and only carrying a little too much weight! We were pleased that she was so impressed with Pindar, whom she called a very unusual cat, a perfect Torbie, and gorgeous. That's a tortoiseshell tabby, but she has swirls rather than the usual tabby pattern, and lovely streaks of red, as well as that exquisite face. The other two are standard Tortoiseshells, and she complimented them on their gentle good nature, since there's not much that's polite to say for their clownish faces! 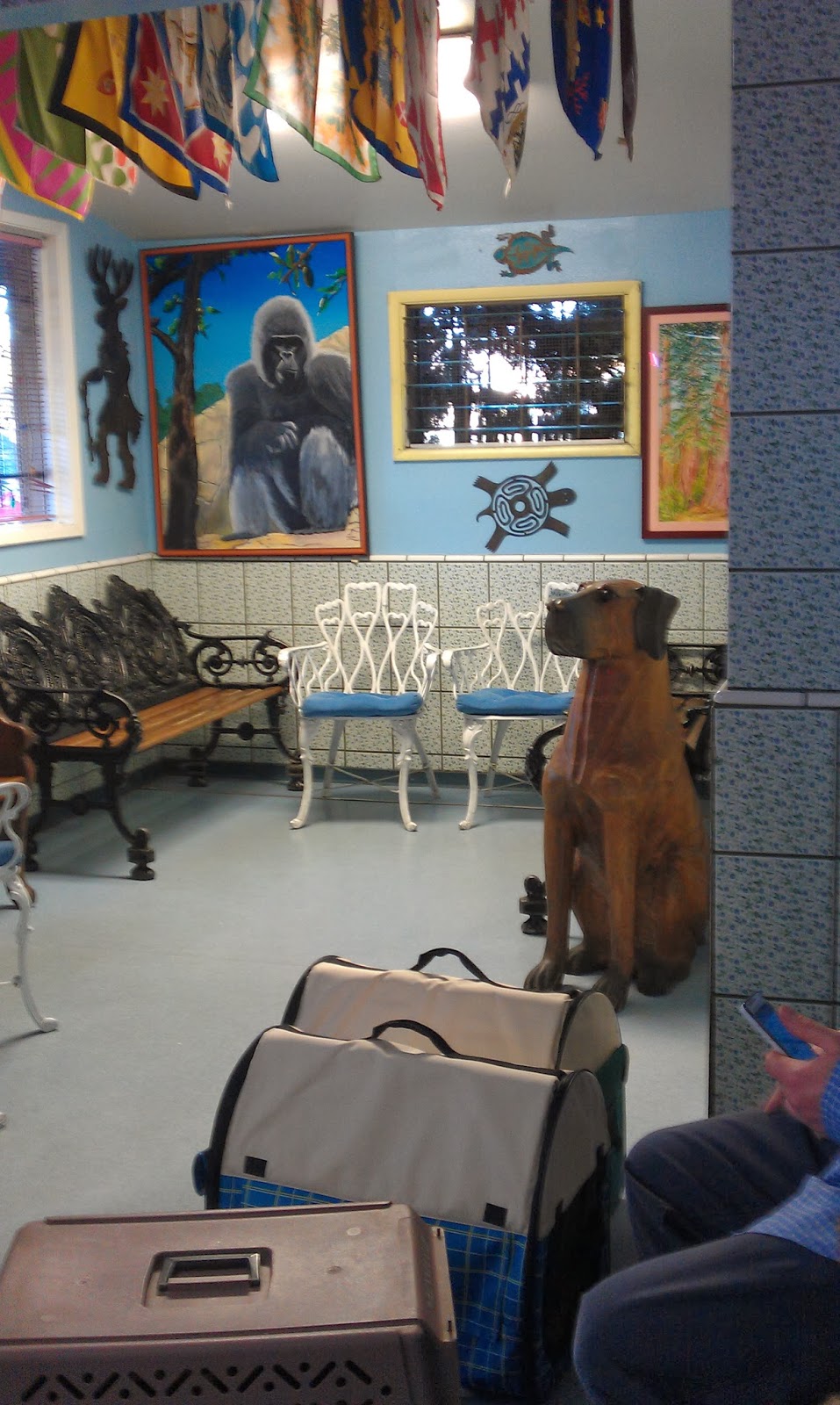 A bohemian vet's office with lots of personality!
The trouble came when the assistants realized they hadn't taken Marshy's temperature. She had to be pulled out of her box again, but when they tried to use the thermometer she let out a scream. Afraid there might be something wrong with her bottom, they called back the vet. Three people had to hold her down, and there emerged from that cat a noise I never heard from her or any other cat before. Not the high yowling scream you hear when they mate in the street at night; no, more like the foghorn of the Queen Mary right in the room with you. The doctor quickly noted there was nothing wrong with her bottom, it was just that Marshy had reached that moment when it was All Too Much. Back she was allowed to scuttle into her box.


The drive home was serene, compared; Pindy sat on Paul's lap in her box and enjoyed looking out the window. They couldn't get out of their boxes fast enough, and spent the rest of the day lying around the house in poses of limp, subdued exhaustion. So did we. 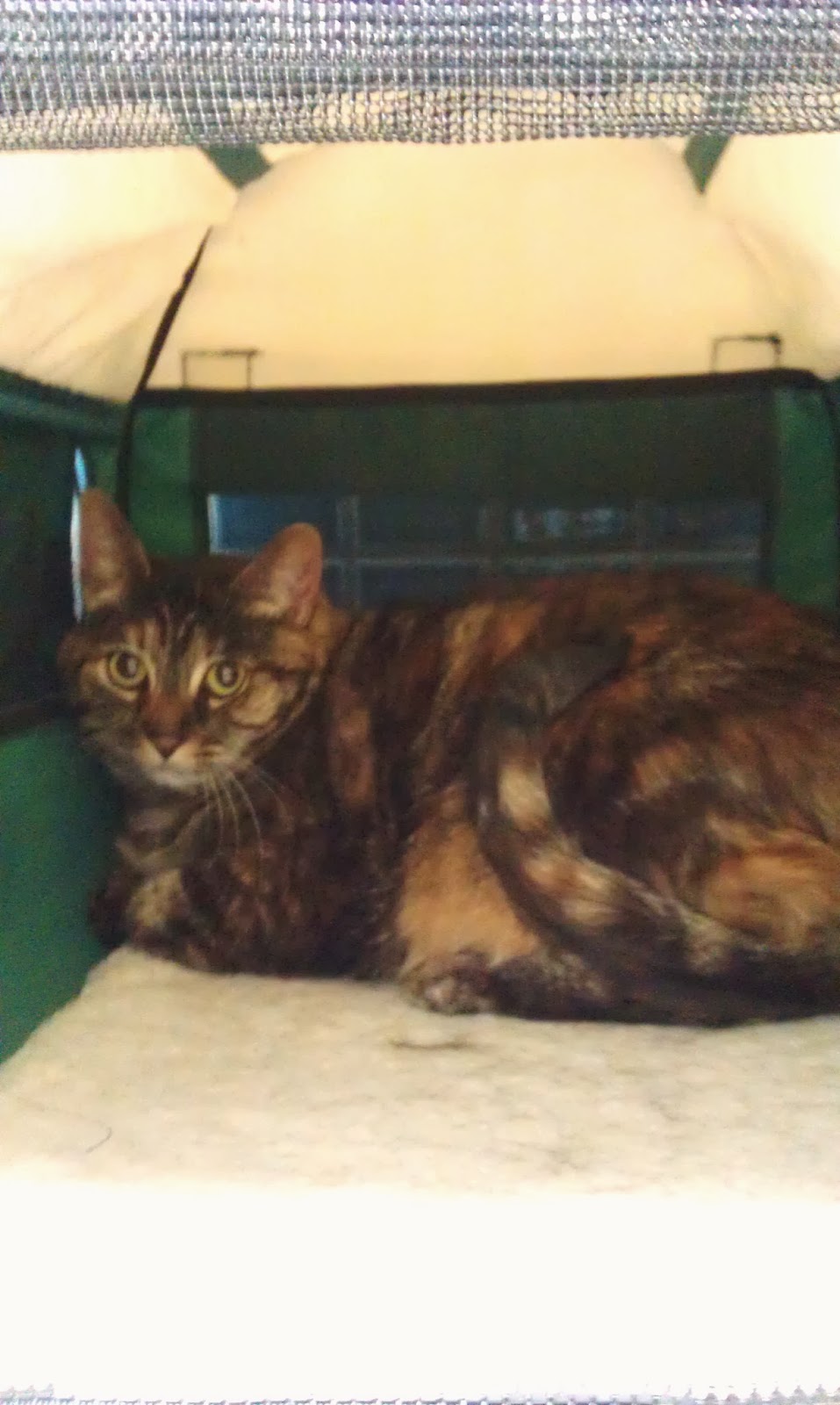 Pindy cowering in her box, with that "Et tu, Brute?" look