I was shocked to realize that I haven't blogged on my own blogalicious blog since Syrie's and my "Austen Assizes" was put on in Brooklyn (excerpts are on YouTube), and that was last October! Mostly I've been blogging at www.AustenAuthors.com, where my "Lady Catherine de Bourgh" stories reach a wider audience and I get to write in company with other Austen obsessives. 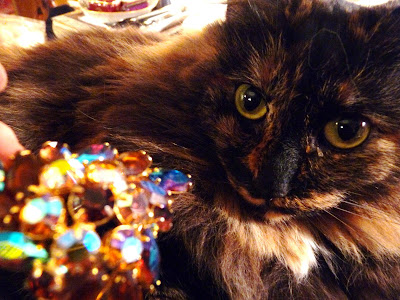 Marshy and an Aurora Borealis rhinestone brooch﻿
But there are other things in life than Jane Austen, and two of them are Cats and what my Alaskan friend Denise calls "the sparkly things" - as in, "Never forget the sparkly things."  Since October, of course, there have been many cat-related incidents (code for things like: Pindy unhooked the cable router) and my sparkly pile has grown so hoardishly huge it is almost ready to have a dragon atop it instead of a cat.  So I will now catch you up, with a photo gallery of not only the new sparkles but our four-year-old treasures, Pindar, Martial and Catullus. 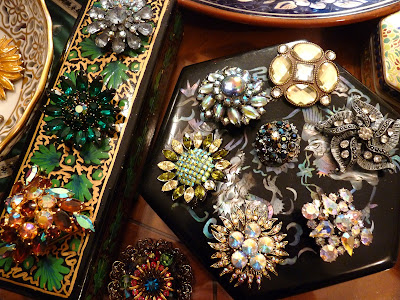 Aurora Borealis Brooches
My latest obsession is with Aurora Borealis brooches.  I'm still learning, but what I've learned so far is that "aurora borealis﻿" is a coating given to crystals to make them sparkle and twinkle amazingly.  Jewelry made with these crystals and rhinestones was very popular in the mid-20th century, and so far my favorite "name" designer is Albert Weiss.  People nowadays may think of such jewelry as glitzy, cheap, costume stuff, but I assure you it is not so!  In my opinion, just one Aurora Borealis brooch on your sweater, and you are golden.  Or crystal, anyway.  Here is the current reigning prize of my collection: 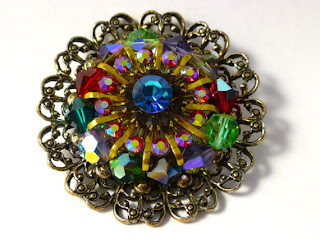 "Melrose Weiss"
I call this baby "Melrose" because the person who sold it to me originally bought it on Melrose Blvd. in Hollywood years ago.  I actually bought Melrose and several others on Etsy, not in my usual Salvation Army venue.  Nice aurora borealis brooches can be found for as little as $10, though of course "Mel Weiss" (and she is indeed a vintage Weiss) was dearer than that!
As for how they look when worn, well, here I am with three friends who are this year celebrating the 50th anniversary of our Hunter College High School class of 1963.  (I didn't graduate from Hunter but after junior high at Hunter went to the High School of Music and Art - which means I'll be attending two golden reunions in New York this June!)  Joanne, Ruth and I all live in California now, while Joan, on the right, is visiting from Boston.  Anyway, you remember what Mr. and Mrs. Bennet said:
She:  "When a woman has five grown-up daughters she ought to give over thinking of her own beauty."
He:  "In such cases a woman has not often much beauty to think of."

Therefore I do not boast of my own beauty in showing this picture, but only want to illustrate that an Aurora Borealis Brooch does add a spot of sparkle to the ensemble! 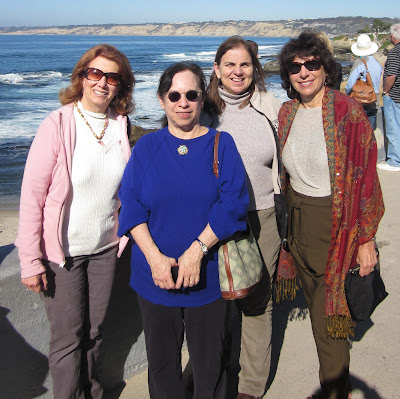 Hunter friends after half a century, in La Jolla.  Joanne, me, Ruth, and Joan

Melrose, a small Weiss, and a swoony pink-and-blue swirl 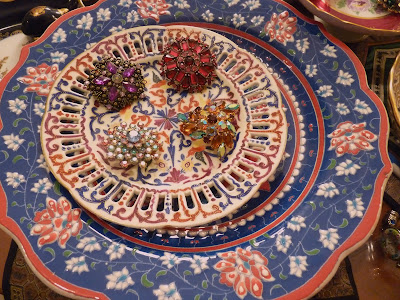 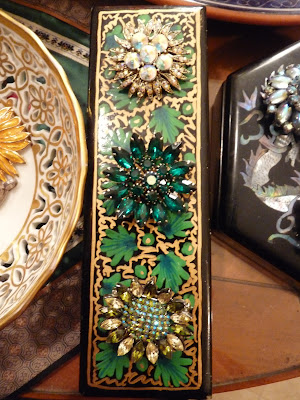 Three beauties on a box.  The middle Emerald Star is divine! 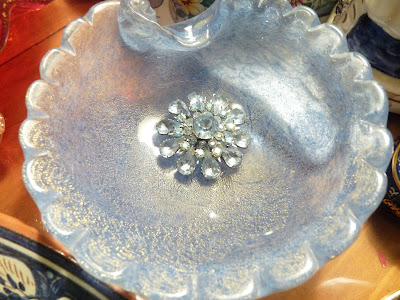 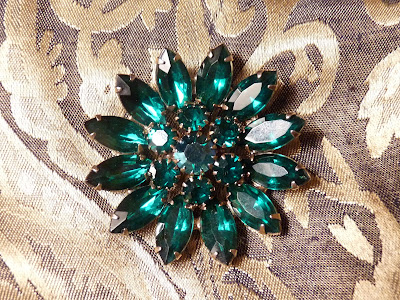 Close up of the Emerald Star.
﻿ 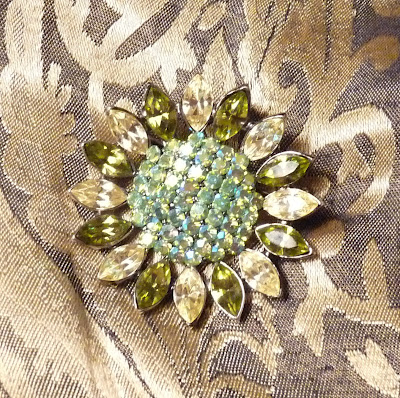 A nameless brooch from the Salvation Army, $10, and priceless.  You have an eye, and then you buy...
Now for some new acquisitions of the non-brooch variety...
﻿ 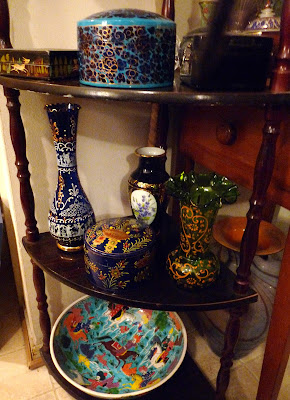 Salvation Army what-not, quickly filled with pretties
My new favorite is a beautiful Victorian glass vase Paul found at the Star antiques store in Hermosa Beach, next door to the library where he's working.
﻿
﻿ 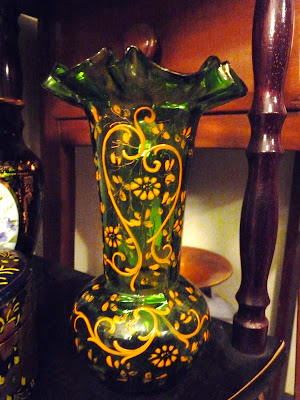 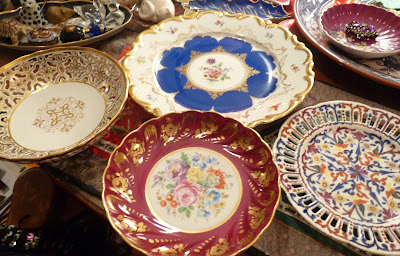 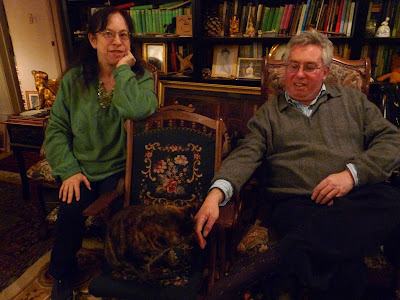 A needlepoint folding Eastlake chair, from Hermosa Beach. Celebrated by me, Paul, and Pindy. 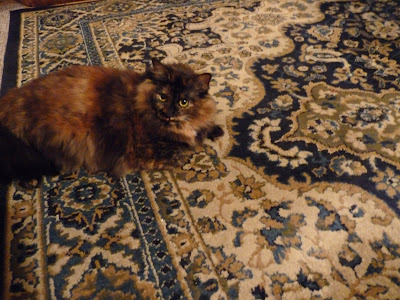 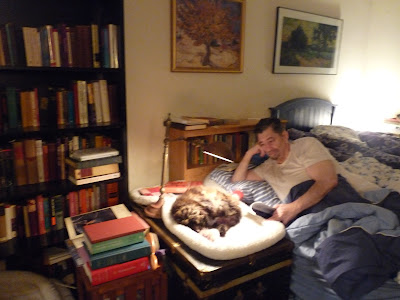 Peter reading in comfort, with Marshy and Tully curled up together nearby
And now, the cats... 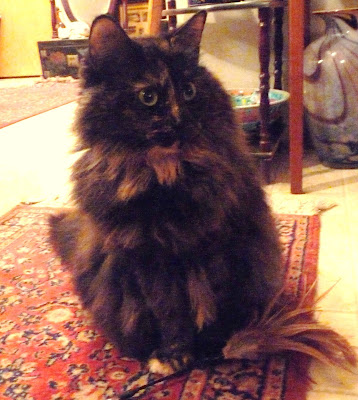 Tully, in possession of an important Feather 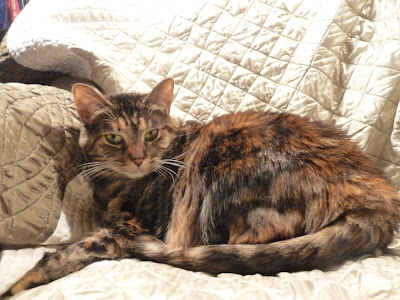 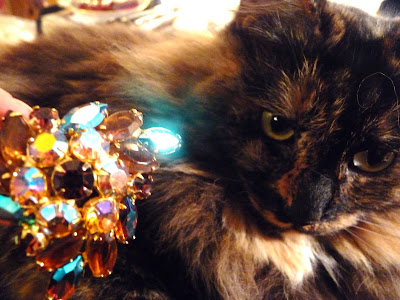 And a final shot of Marshy as Glamour Puss.  Aurora Marshyalis...
﻿
Posted by Diana Birchall at 3:10 AM 6 comments: