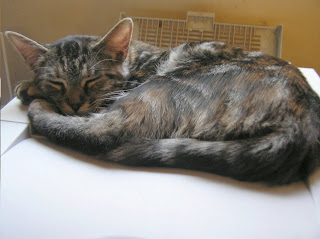 Two pieces of information: 1) Peter hates his birthday. 2) I would place him approximately to the right of Lord Melbourne (Queen Victoria's first Prime Minister) on the political spectrum, which is why he had to leave the country for two months to avoid seeing a Democrat elected. So how ironic was it that his 65th birthday fell on Inauguration Day? (Or that Inauguration Day fell on his 65th birthday.)

Yet, to my extreme surprise, he had a wonderful birthday! He played with the cats most of the day, watched a bit of the Inauguration without noticeable discomfort, and was delighted with his birthday gift, which was a Drinkwell Platinum Water Fountain for the cats. "You could not have given me a birthday present that pleased me more," he told me earnestly. The little cats have such pleasure in swatting their little paws in the stream. And then, two of our dearest friends who are a newly unemployed editor and an newly unemployed journalist respectively, turned up at the Novel Cafe to give Peter some home baked raisin cinnamon bread for his birthday. Generosity, nobility, kindness, friendship in dark days. As we walked back to the car Peter was heard to say reflectively, "This was a very good birthday." I'm thankful it was so.

We are all waiting to hear the gory news of severe budget and staff cuts at work. What can you say? Brother, can you spare a cat? 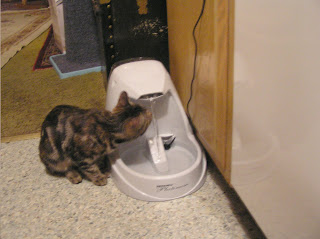 A birthday present for the man who has everything (or nothing): Cat water fountain
Posted by Diana Birchall at 8:13 PM

I shall send you a photo of Isabel and Ian. The one we took of me and Clary didn't come out well. I no longer look good in photos unless they are carefully taken.

What a cute birthday present.
I am crossing my fingers for the financial situation for you and your friends.

I am so sorry to hear the grim situation at work. Please keep us informed! Glad to hear that Peter had a lovely birthday, and I adore the pictures of the kitties! Beautiful, by the way. Isn't it amazing how they wrap themselves around our hearts?

Such lovely cats and great photo subjects. No wonder you are besotted. I can't blame you for being sidetracked and showing off your kitties. I must send you a photo of my dog at doggie day care. I am as crazy about my pooch as you are about your kitties!!