The Cats' Debut into Literary Society 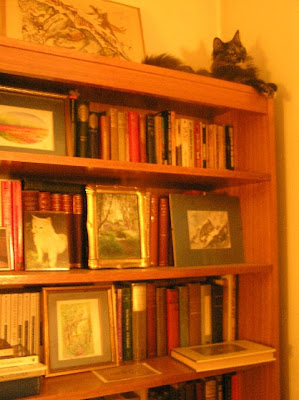 The latest adventures of the Cats began with the trials and tribulations of Martial, who had a scratched cornea - probably something from her abandoned youth, that flared up lately when she rubbed it. The vet put an Instrument of Torture upon her, known as an Elizabethan Bonnet. It was the saddest sight to be seen for many a day. The poor creature could not walk. She could not see. She could only stumble backwards and slither sideways, like a lame raccoon. And she slid into alarming depression - she became completely limp, lying there, mute, except for when she emitted her signature plaintive cries of "Squee! Squee! Squee!" 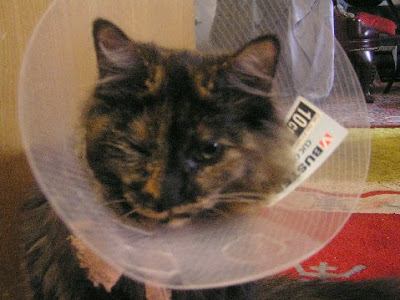 If you are one of those who think cats cannot feel compassion and sympathy, disabuse yourself. Martial's sisters gave up all squabbling and play-fighting. They were visibly disturbed by the sad plight that had come to her. Valiant little Pindar never left her side; she sat by her at all times, wherever poor Martial stumbled, and when she was in misery because she could not wash, Pindar washed and licked her all over, with many kisses. Catullus was not so valiant, but equally disturbed: she hid away terrified by the awful sight of her sister with the horrible object on her head. After some hours, she crept out, and tentatively advanced toward her, looking for all the world like a small child approaching its mother on her deathbed. She patted her once, and retreated again. My picture of the moment should put paid to the idea that cats don't care about each other. 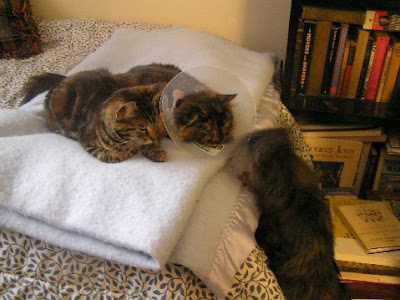 Martial's ordeal was somewhat enlivened by my cousin Anne's husband Jim, an artist, who sent a get-well drawing. I thought at first the drawing was done by their daughter Joanna, 11, but it was explained to me that the image of Martial was wobblified on purpose to make it look like the work of a cat. 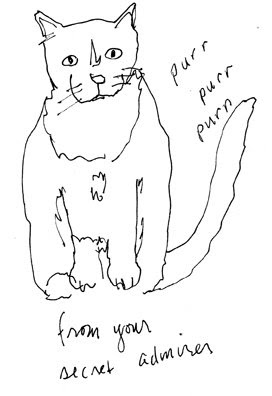 From a Secret Admirer

On the third morning, Martial could endure no more. She was sitting on my desk, when suddenly she started to shake all over, and pull and scratch at her Iron Maiden with astonishing violence. "What are you doing, you silly thing?" I asked, just as the torture device was fiercely ripped off, and Martial outburst with joy! She spent the next hour washing her entire self and scratching particularly where the collar had confined her. I knew I ought to replace the device - be cruel to be kind - Peter and Paul and I talked it over - but it was impossible. None of us could bring ourselves to do it. The poor little animal had been so miserably depressed; she had no idea the thing wasn't forever, and she was so purely blissful in her freedom. So we took her back to the vet, and she was pronounced doing well and in no more need of torture.

Now that she was recovering, the serious spoiling began. We bought the cats shearling beds: 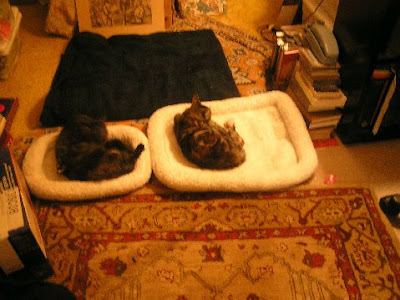 "What, no satin sheets?"


And toys, and toys, and more toys: the house is so strewn with feathers and shocking pink pompom sticks that it looks like the Copacabana. American cat decor is not tasteful. Possibly they do things better in Japan, or Paris. 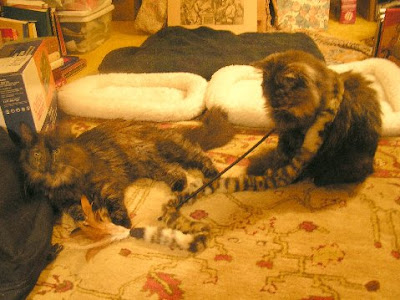 Midnight at the Copacabana 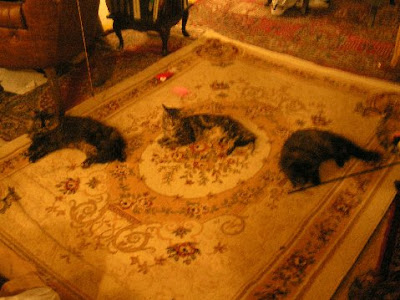 The three little queens lie on the floor, like Eastern Crescents


Then came the most wonderful purchase of all: A Lazy Cat Kitty Window Ledge Seat (um, are you keeping a running tab on the expenses here? By all means include the vet). You know how they love sitting together looking out of Peter's study window at the birds and the squirrels. How much better to have a shearling window seat and look out in luxury? But we did not reckon on the degree to which Martial had become spoiled and entitled. Immediately after I installed the seat, she took command of it, and lay there at her sprawled-out ease, like Cleopatra on her barge. The look on the face was a silly, cross-eyed cat version of "Look at me, I deserve this throne."

In emphasis of this, when hapless Pindar tried to hop onto the ledge with her, she firmly pushed her off, even bit her (not hard) on her little striped leg! She repeated this performance with Catullus. We were appalled. Instead of giving the three cats more comfort in their window, we had deprived two of them of even climbing up to look out of the window at all! 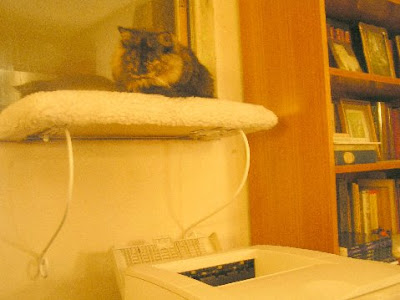 The Shelf of Contention: Martial Ascendant 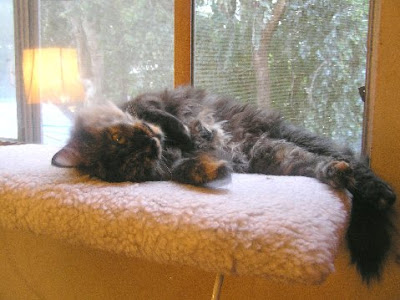 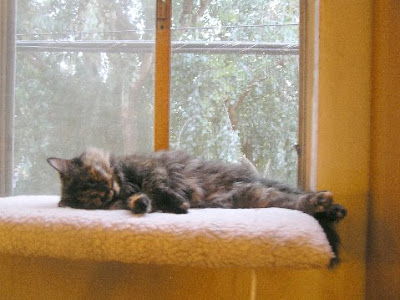 Matters had to change, so Peter firmly laid down the law to Martial, removed her from the shelf and placed the other two upon it. Martial learned her lesson, and a somewhat sadder and wiser cat learned to share with her sweet sisters. 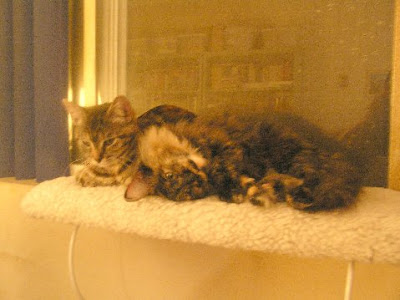 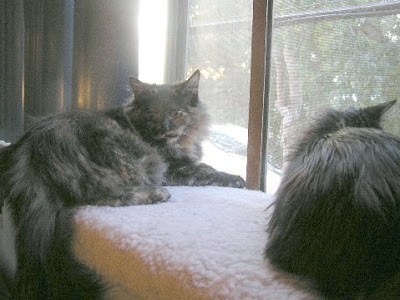 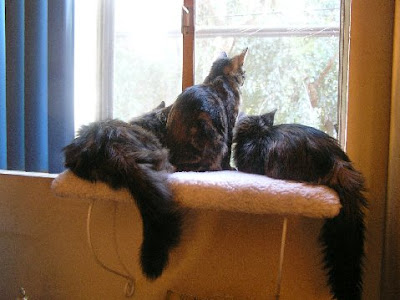 Then it was time to celebrate, so we had a party. Actually, it was a meeting of my reading group, to discuss Parallel Lives by Phyllis Rose, a slightly dated but still interesting examination of several varyingly dysfunctional Victorian marriages among literary figures, such as Carlyle and Jane, Ruskin and Effie, Dickens and his wife, George Eliot and Lewes. I decided that this would be an appropriate occasion for a coming-out party, the Debut of the Cats into Good Literary Society. It would not be necessary for them to talk, for as Mary Crawford said in Mansfield Park,

"A girl not out has always the same sort of dress: a close bonnet, for instance; looks very demure, and never says a word."

Of course, Martial's bonnet was gone, but I could answer for it she would say nothing more objectionable than "Squee." So, I commissioned editor friend Jennifer, who has a penchant for baking and has been turning out wonders (the espresso shortbread cookies with butterscotch glaze were my favorite) to make chocolate cat-shaped cookies, and cupcakes with cats on top. She produced some delightful treats, though afterward allowing that cupcake designs were fiendishly difficult and she wouldn't attempt that again. Here's what she baked: 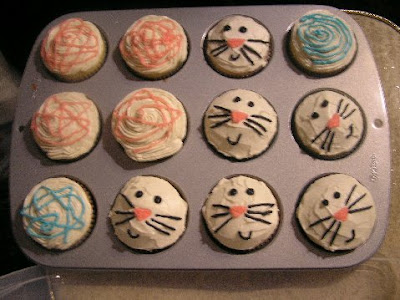 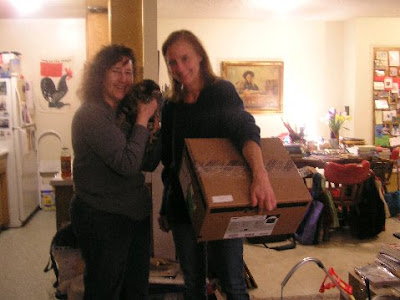 Susan with cat, and Jennifer 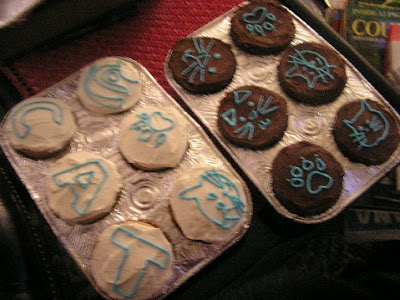 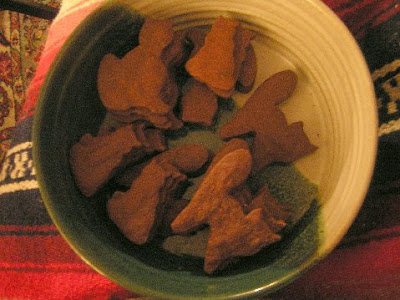 
The party was a great success, and the three debutantes behaved themselves perfectly. It turns out that they are very sociable animals. I thought they'd retreat into the back of the house, or be annoyingly underfoot, but they did neither. They preened on their rug, showing off their lovely selves; they hopped onto laps and made love; and they allowed Paul to put them through their jumping paces, as at a circus. They did not interfere with the food either when I was preparing it or when we were eating, and in short, they showed very fine manners indeed.

Much was said, and much was ate. 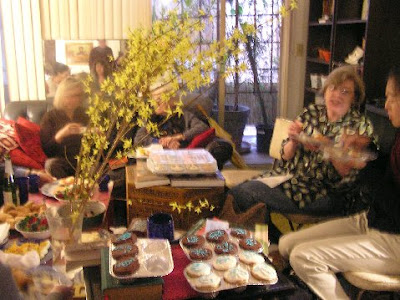 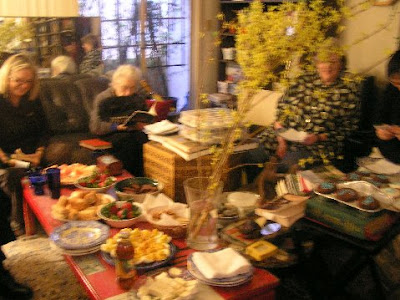 Forsythia for spring, to remind us of Central Park 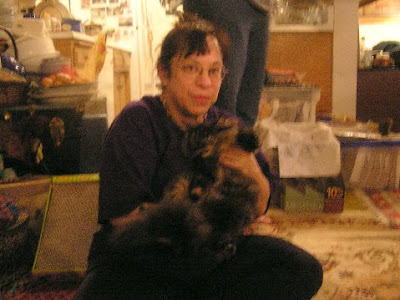 My Martial and Me 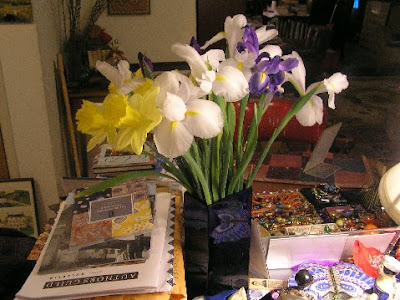 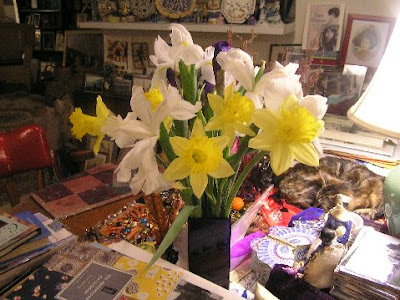 
We decided that at our next meeting, on March 29th, we will compare and contrast Mansfield Park and Silas Marner, as the Ventura Jane Austen reading group has done that and it seems like an interesting idea; and for our April 26th meeting we will read Passionate Sisterhood: Women of the Wordsworth Circle by Kathleen Jones.

In other news, I've been asked to appear as a guest on the MLA's (Modern Language Association) radio show, "What's the Word?", talking about the Eaton sisters. I'll have to read my own book again, it's been so long!

Meanwhile, the Miscreant Martial has silently and stealthily taken up possession of her Ledge again, biting all comers...
Posted by Diana Birchall at 7:47 PM

What a simply glorious post and I loved every word. Gosh I miss having a cat. When I finally stop wrok (HA! laughed she sardonically) I am going to get a cat, I am I am I am

Elaine's comment covers everything I wanted to say, though I'll add more awwwwwwwwwwws. And I'm getting a cat as soon as tenacy agreements let me.
Simon

Simon and if it is a she cat will you call her Miss Hargraves..??

You are enjoying your cats enormously. I too wish I had no work for then I could give myself over to them. Jim was not well today and spent the day in bed -- with two cats by his side all the livelong day.

I've not read _Passionate Sisterhood_ yet but it looks good.

I loved this post. Pindar is a baby version of my Muffet due to 16 in May although M is short haired, their expressions are similar. wish I lived near then i could babysit them for you.Daphne

What a great post. I loved the cat pictures, but that feast all laid out was sure a mouth-watering looking feast for the eyes. I see you settled on the beige windowsill seat, but the catties don't care, I'm sure, and seem to love it anyway.

Now I'm thinking my cats need one, as well as a water fountain .... You are leading me to unexpected expenses here. :-)

You definitely have the most spoiled cats! I'm sitting this week for a family of 14 cats, and they do not have as much Cat Equipment as your three have.

I am glad to hear that Martial was able to be persuaded to share; sadly, I expect future lessons on the subject will be necessary.

(Did you mean to say that the sausage rolls were for the Jewish guests, and the bagels for the goyim? If so, I don't get it.)

Susan Craig once said to me, "I'd rather have cats than furniture."
A good quote to keep in mind as they take over your domain. They are incredibly empathetic creatures and it's no wonder they're frequent companions of writers... Enjoy! I'm going to give my kitty a skritch.

Ain't they wonderful? I'm gonna go give my kitty a skritch.

Alex Dog, feeble joke was that many Jewish people eschew the kosher and make for the porkiest things...and plenty of non-Jews adore bagels and lox!

Holly, I didn't know that was Susan's philosophy, but I embrace it!

Don’t purchase an LED Light or discolight and don’t waste your money install this app in your android device and solve your disco with music, flashlight & strobe light problem.