Springtime at the Salvation Army

"Emma had a charitable visit to pay to a poor sick family, who lived a little way out of Highbury." 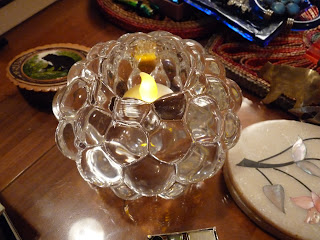 I've always been vaguely aware of the Salvation Army and its thrift shop here in Santa Monica, but hadn't set foot inside it in years, until recently, when an unmoneyed friend who was furnishing an apartment kept exclaiming about the treasures she was finding.  So I went with her, and it was the beginning of a series of surprisingly delightful shopping adventures. 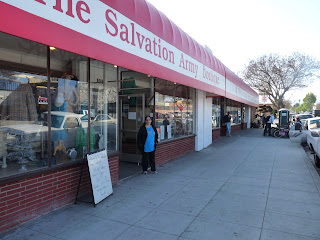 Here I am at the Santa Monica store 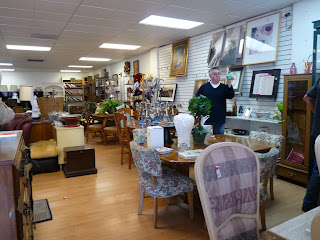 And here is my son Paul, inside 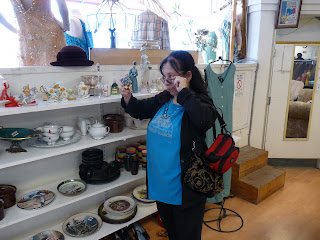 Examining bric-a-brac
"Emma was very compassionate; and the distresses of the poor were as sure of relief from her personal attention and kindness, her counsel and her patience, as from her purse."
Here are some interesting facts about the Salvation Army.
It was founded in London in 1865 by William and Catherine Booth, as an evangelical charitable mission.
It is called Sally Ann in Canada.

The Salvation Army salute consists of raising the arm above shoulder length with the index finger pointing up to Heaven, and shouting, "Hallelujah!"

Today the Salvation Army is the second largest charity in the United States.

The Salvation Army operates in 120 countries, is organized like an army though most of its workers or adherents are not soldiers but church members. It is well regarded as one of the world's largest providers of social aid and disaster relief, though there was a murky episode when the organization was accused of discriminating against homosexuals in its hiring practices.

The Beatles' song Strawberry Fields was inspired by a Salvation Army children's home of that name in Liverpool.

And these are some of the things I've acquired at the Salvation Army in recent weeks, for your viewing delectation. 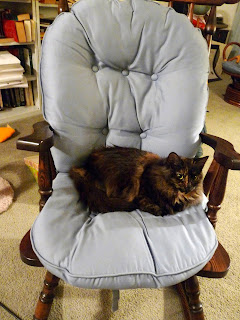 An oak rocking chair for Christabel-Catullus 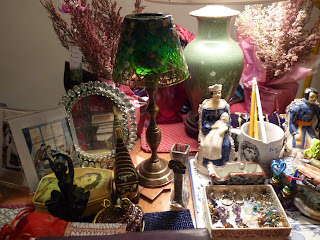 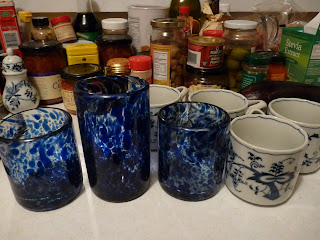 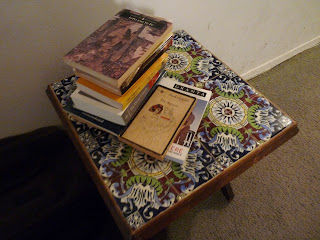 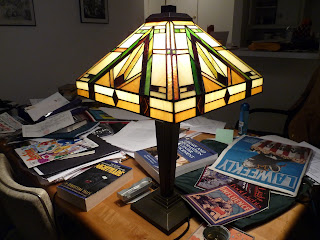 Tiffany style desk lamp
... "[Elizabeth] had finally proposed these two branches of economy, to cut off some unnecessary charities, and to refrain from new furnishing the drawing-room" - Persuasion 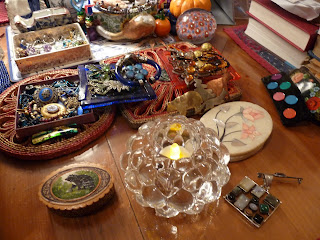 I liked this crystal candle holder ($12)
"her writing–desk, and her works of charity and ingenuity, were all within her reach"
- Mansfield Park 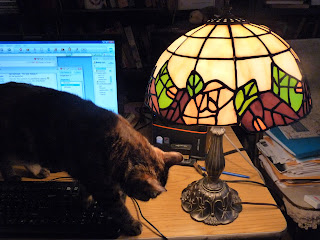 Pindar examines my Tiffany style desk lamp
"Upon the whole, Emma left her with such softened, charitable feelings" 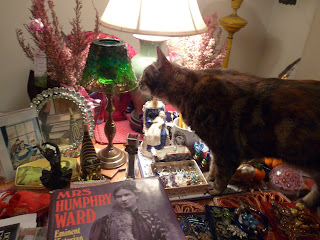 Pindar sniffs the green glass candle holder
One day when I brought home a new stash of treasures I asked Paul to guess which ones they were.  He commented that it was like the scene in Ozma of Oz, when they have to guess which ornaments are actually people who've been transformed.  The seeker has to go around touching the ornaments and saying the word "Ev," and if he guesses right, the transformed person turns back into himself.  So Paul went around guessing and saying "Ev - that's Salvation Army, isn't it?"  Nobody got transformed, but he was most often right. 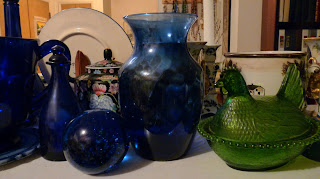 Can you guess?  The blue glass ball is new, and the green hen. 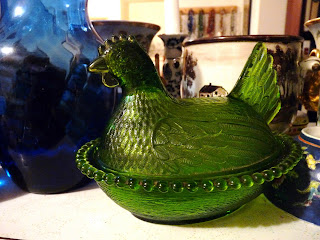 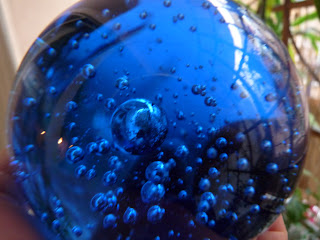 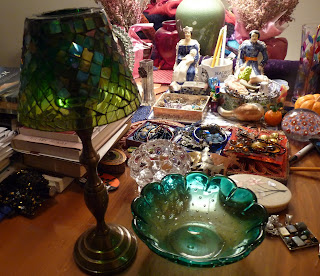 And the new green dish clearly comes from the Emerald City. ($7.50) 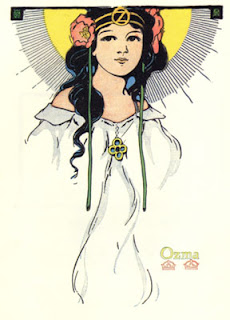 Ozma of Oz, 1907.  (Is she wearing a Suffragette pin?)
There is a perfectly thumpingly astounding Salvation Army lyric by Vachel Lindsay entitled "General William Booth Enters into Heaven" (1913), with a chorus of "Are you washed in the Blood of the Lamb?" Here's the first verse:

And so on. Perhaps the best known verse associated with the Salvation Army, however, is the one we all sang in summer camp:

I was lying in the gutter,
I was covered up in beer,
Pretzels in my moustache,
I thought the end was near,
Then along came [Name]!
And saved me from my curse,
Glory glory Hallelujah sing another verse

"The adieu is charity itself."
Posted by Diana Birchall at 4:00 AM

Lovely blog. I like your Salvation Army finds and, of course, the way you weave in Jane!

Great post. I love shopping at the Salvation Army when I visit my sister in NC.Wish there was a good store closer to me.

I had a period where I was shopping at our local salvation army. This was the early to mid-1980s when I was not working (for money), had a daughter with no sitter ever to leave her with, and just wandered about the world with her. I had not much money either.

In those years we (Jim and I) went to auctions too. Your photos make your Sally Anne stores look ever so much nicer than ours here in Alexandria, and I see such pretty glass and table objects (some of which you brought home), the type we did find at auctions (they "specialized" in art deco).

Most of this stuff has vanished by now, but I do have from SA still a credenza (I called it for reasons in my past I can't reach). It's a lovely piece of irony looking cabinet furniture that stretches across a wall under a long window in our dining area. We have pictures for our walls (framed) from the auctions: a nymph on a rock against a blue background, an Alma Tedama of young people dressed as if they were British actors doing Romans for the BBC reading Virgil; a Columbine picture, two matching couches with soft gold-yellow upholestery (the cats don't do much for the fake ivroy frame). A desk. I used to haul the furniture home in a hatch-back sedan I had.

Days with no goals beyond getting through them solvent and reading books,

Ah yes - days with no goals but staying solvent and reading books. Funny, that was my twenties, too. Seems like this touched a strain of nostalgia in you, Ellen, maybe you should do a "Sally Ann" post of your own!

In my (UK) experience, they're generally called the Sally Army, but I have occasionally heard Sally Ann.

Thank You for Such cozy photos with some history to go along ~~the charming JA Quotes just add to the overall Nostalgia that so often *Emma-nates* from shopping at the SA and other's like......There is something comfy and constant about it all~~~~

All about Value. At AMCdecor.com we know
what value means: competitive pricing, personal attention and the best customer
service in the business. AMCdecor.com
sells top name brands such as Quoizel
Lighting, Murray
Feiss Lighting, Momeni
Rugs, Kid Kraft
and More. For all your home decor
needs - including furniture, sofas love seats and more visit us at www.amcdecor.com
or call toll free 1-866-554-6999. International Shiping is available.