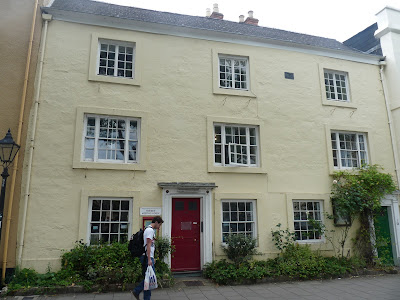 Friends' Meeting House, St. Giles, Oxford
﻿Saturday, July 23
To my surprise, I slept like a top in the Cornish Riviera sleeper train. I’d been anxious about it, thinking it foolhardy to get no sleep on a train the night before having to give a talk, but Jan thought it would be an adventure and she was right – only I slept, and she didn’t! She knocked on my cabin in the morning to say she was off, and departed for Cambridge, having to take a cab to King’s Cross. I was more fortunate, just stepping off the train into the middle of Paddington, where I had only to buy cappuccino and pain au chocolat, and board the next direct train for Oxford. 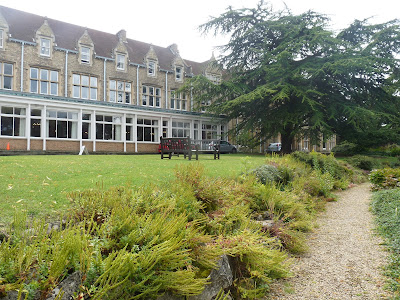 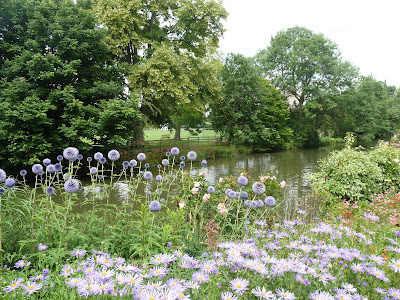 The garden by the river at St. Hilda's College
Arrived in Oxford about 8 AM, and took a taxi the ten minute drive to Jean’s house. She and Tony were up and about, and we enjoyed tea and a happy reunion together. Then Jean had to go in to St. Hilda’s for a meeting about the Pym conference, and I stayed back, to do email and perhaps nap. We agreed that I’d take the bus into central Oxford to meet her at the old Quaker Friends’ Meeting House before my talk at 4 PM, but to my delight Jean phoned and asked me to come to lunch at St. Hilda’s! I had a chance to refresh myself with a look at the river and gardens which I remembered so well from past conferences, and then was kindly welcomed by the redoubtable organizer Eileen Roberts, and by Clemence Schultz, chairman of the Charlotte M. Yonge Society, whom I remembered from attending the conference of the centenary of Yonge's death, at St. Hilda’s in 2001. Pleasant Yonge talk and shared memories, and then they had to go back to their meeting, while I had a couple of hours free to wander around Oxford before my talk. 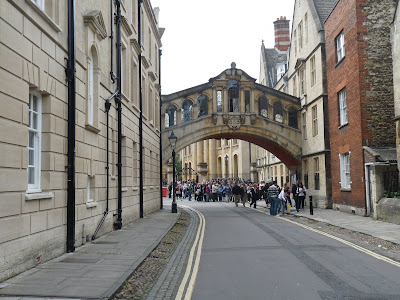 A crowded Oxford
This was of course a treat, but I admit to being taken aback by the immense crowds of summer students – clearly not regular university level students, but masses of teenagers from various countries (Japan and Italy seemed the main ones) taking some sort of language classes. Oxford has always been full of summer visitors, students and tourists, but this was at another level. The narrow streets were so thick with kids that you could hardly thread your way, and they were not space conscious, so you were constantly bumped and jostled. The Bodleian quad was almost surreal, with hundreds of kids all taking pictures of each other; walking to the shop, I probably ended up appearing in twenty different shots.  All I managed to do in a couple of hours was a peek at Blackwell’s, a look at an intriging sounding exhibit called Eccentricity at the Museum of the History of Science, which turned out to be rather dry and disappointing, being more about inventions than genuine eccentricity.  But I got to the Meeting House in good time. 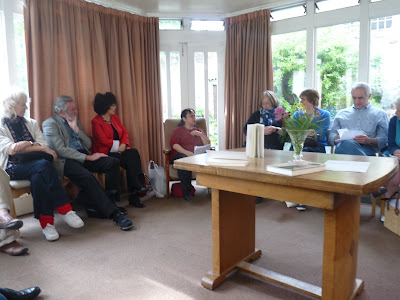 My talk at the Friends' Meeting House 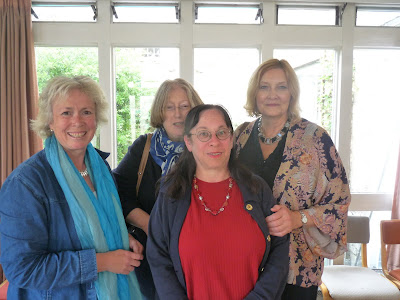 After my talk, with Alison Boulton, Jean Harker, Helen Rappaport
Finally I reached the Quaker Meeting House in St. Giles. I’d passed it many time before but never been inside, and was very excited at being asked to speak to the Writers in Oxford Group in such a place. Built in 1660, it is a lovely old building with such a welcoming feeling. As I was early, I greeted people as they arrived, and it was such a warm and wonderful group – which I was happy to see included several old friends, which made me feel very comfortable! I did my talk in a charmingly informal and peaceful setting, a room looking out onto the garden, where chairs were placed all around against the walls, in a very friendly “Quaker meeting” fashion, much nicer than the usual audience/lecturer setting. 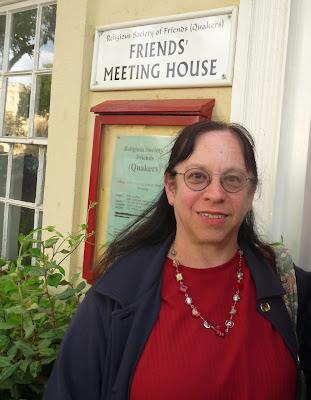 A friendly welcome, indeed
The talk was called “A Life in the Story Department: Reading My Way Through Hollywood – Part Two,” since I gave this group a very similar talk a few years ago, and this might be regarded as an update. I talked about my work, and as the group members are all published authors they had lots of questions about what a Hollywood story analyst looks for in submitted novels. I also talked about having been the third of four generations of story analysts in my family, dating from my grandmother, who was story editor of Universal Pictures in 1924, and about her books and mine. It was fun, but as always a great relief when it was pleasantly over! Afterwards, Jean, the group’s treasurer Sheila Cameron, Helen Rappaport, and Christine Finn, took me out for drinks at Brown’s. I had perry, and felt a bit wobbly, which I attributed to having slept on the train! Afterwards went back to Jean’s where Tony prepared one of his famous curries. 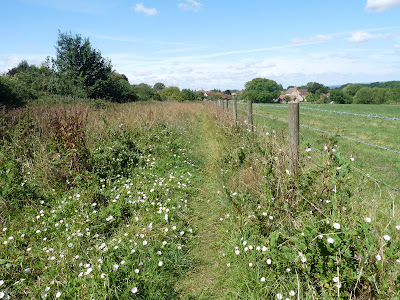 A country footpath, near Oxford
Sunday

Lovely warm sunny day, went for a walk with Tony and Jean in the morning; I had never realized, in all my visits to their house on Cumnor Hill, such a short distance from central Oxford, that merely around the corner was open fields and countryside. This was a revelation, and I so enjoyed the ramble that gave me glimpses of green meadows, thatched cottages, and fast ripening apple trees. 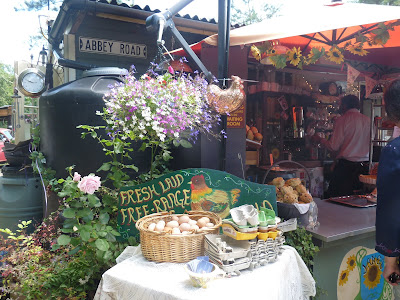 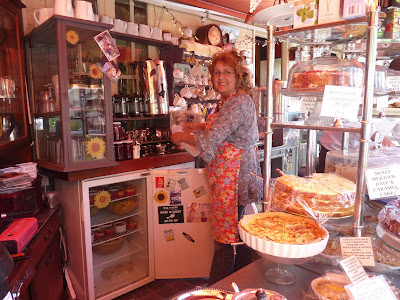 Jane at work in her tea shop 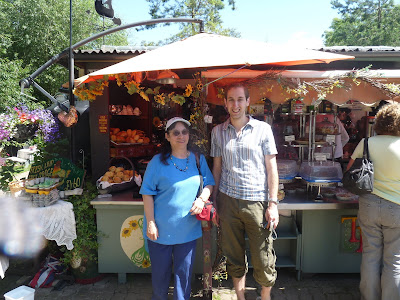 Me and Simon at the tea shop
Then Simon of Stuck-in-a-Book fame and his housemate Debs picked me up at 11 and we drove, as planned, to the eccentric, hidden, wonderful riverside tea shop called Jane’s Teas near Kirtlington. Only open on Sundays, it’s run by a lady who lives on a Thames riverboat, and originally started serving teas to other boaters, but now serves to the public, if you can find your way there and stroll down a long country lane on a Sunday! It’s a unique, charming place, and the food is delicious, as well it might be as she grows all the fruits and vegetables on her own freeholding, with cream from her own cows. 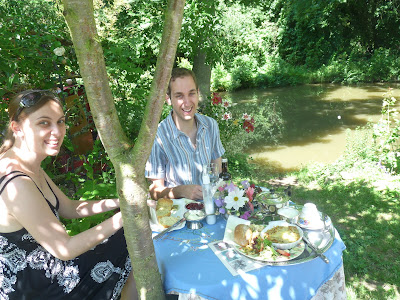 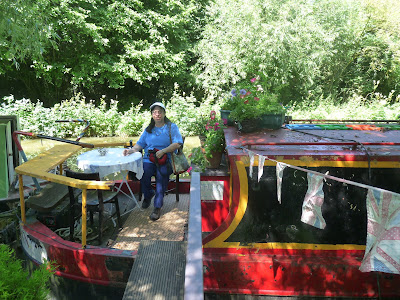 Me on Jane's riverboat 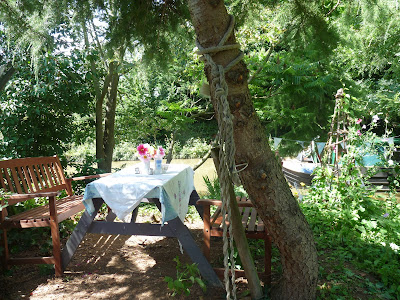 A riverside table
I had a seafood pie and cream tea, and bought some of Jane’s chutneys to bring to friends tomorrow. Lovely chat with Simon, who I know from the Dove Grey Books list (devoted to Persephone books and early middlebrow fiction) and have met before, and I felt as if I’d known Debs for ages. But Simon has written about this idyllic afternoon, as well as my talk, on his own blog, one of the finest book blogs in England; if you’ve never visited, it is my honor and pleasure to introduce it to you:

Was in such a mellow mood on leaving Oxford (Simon kindly drove me to the bus station) that the three-hour bus ride between Oxford and Cambridge only seemed like a mellow winding about the countryside. The bus stopped right near my Cambridge friend's house, where I passed the best evening of the whole trip, at an elegant family dinner, which, being in the bosom of a friend’s family, I will not blog about. But it was the perfect end to a perfect trip, and could only leave me saying, like Jane Bennet in Pride and Prejudice, “I do not deserve it. Oh! Why is not every body as happy!” 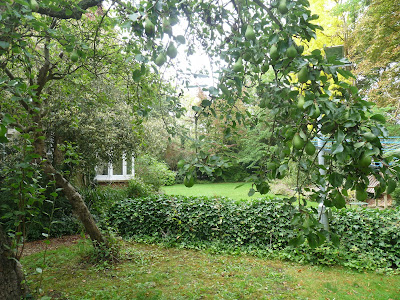 Pear trees in Cambridge garden
The pleasure lasted a little longer, when my friend Christine from the Girls Own list met me in the morning, for tea in a little shop not far from King’s College, and then a dip into The Haunted Bookshop, my favorite, still reassuringly piled as high as ever with old books, particularly children’s books. I splurged on a beautiful first English edition of Charlotte M. Yonge’s The Cunning Woman’s Grandson (1889). I thought 20 pounds was a lot, but I now see that I was lucky to find this extremely scarce book and the price was excellent. I gave Christine the pretty copy of What Katy Did Next that I bought in the Scilly museum, as she is a Susan Coolidge scholar, and she gave me a lovely book called From Norfolk Knobs to Fidget Pie: Foods from the Heart of England and East Anglia. 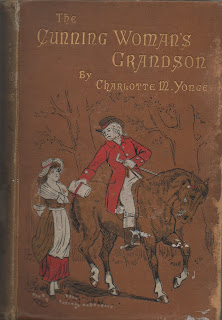 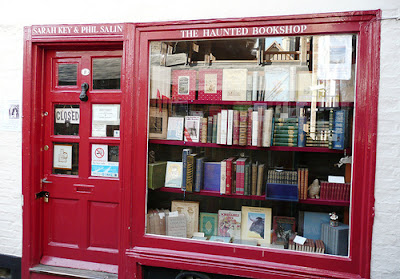 The Haunted Bookshop, Cambridge
The journey home, train from Cambridge to King’s Cross, tube to Heathrow, several more movies (for some reason I watched Marilyn Monroe in The Misfits for the first time, quite fascinating, think it must always have been underrated).  A journey marred only by the confiscation of my Jane's Tea Shop precious jam and chutney at Customs for being a few milliliters over the allowed amount! 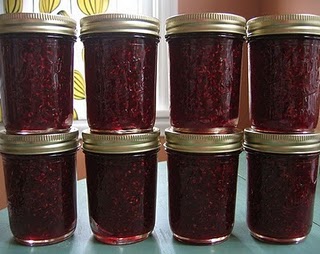 Probable view behind the scenes at Customs.  Greedy beasts!
Posted by Diana Birchall at 3:28 AM

Lovely post, Diana! Will be so nice to look back on in years to come.
Simon

I loved hearing about your trip, Diana-glad you had a wonderful time. I bet that customs person couldn't resist your chutney!

It has been great reading your posts about another trip to these islands. Thank you, Diana! The next best thing to indulging personally a "Dovemeet", as we call them, is reading about others enjoying them. Come again soon, Barbara