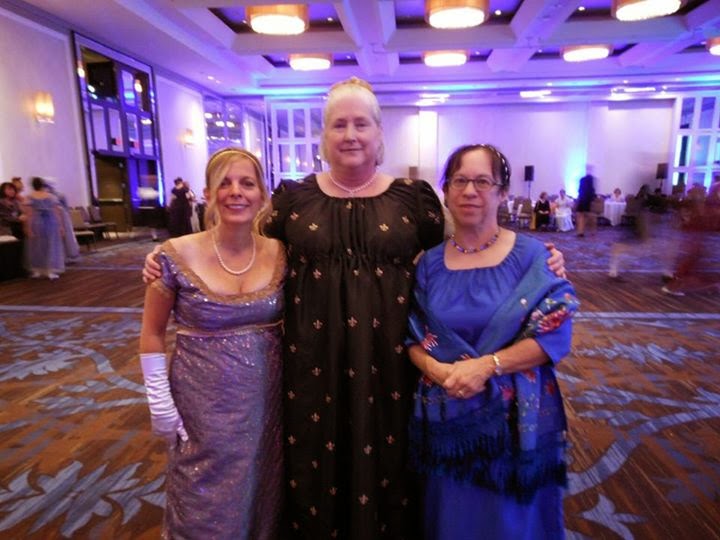 Karen Doornebos, C. Allyn Pierson, Diana Birchall - three members of the popular "Austen Variations" writing blog
A guest blogger!  I have a guest blogger on "Light, Bright, and Sparkling" for the very first time!  As a companion piece to my previous post, "A View from the Stage," C. Allyn Pierson (more familiarly known as Carey), has agreed to tell the story as she saw it from the other side of the footlights.  (Not that there were any actual footlights.)  Carey is a member of Austen Variations, the "Austenesque" writing blog I belong to, and we both write stories there regularly. She's also a physician living in Iowa, with many fascinating interests, which you can read about on http://austenvariations.com/   And now, here's Carey's tale of matters Montreal...


View from the third row…


My miniscule part in “A Dangerous Intimacy” began almost a year ago when I followed Diana’s Facebook posts and blog posts about the 2012 AGM and I discovered that she and Syrie would be writing a new play and presenting it for the 2014 AGM in Montreal. During her comments she lamented that her only Regency gown had been deemed DOA by her friends and that she would need to get a new gown, sighing that she would have to have someone make one, as she does not sew. I volunteered to sew her a new gown…but it took about 2 weeks to convince her that I really meant it! It would be a dangerous thing (not intimate, but clearly dangerous…) to volunteer such a thing if I didn’t mean it!


After some wasting of time, twiddling of thumbs and a couple of months, we finally came down to the cotton thread (sort of like the brass tacks a là sewing…) and I obtained royal blue satin and selected and altered my pattern. I used the wrong side of the satin, as Diana wanted a gown that could be used for daytime as well as for any Regency balls she might come upon, so she did not want it to be too glossy. I chose to make it a drawstring dress so that she could not only adjust it to fit perfectly, but she could actually get in and out of it on her own (those who have been to Jane Austen events have probably dealt with the “OMG! How do I get out of my dress here, alone in my hotel room? Is this included in room service?”).


After the gown was finished and as the AGM approached, I offered her a cap, fichu, etc. and then discovered that she would be costumed in green baize! When I finished laughing, I went on to work on my fleur-de-lis embroidered gown, hoping to finish it before I left for beautiful Montreal (I finally finished it 45 minutes before the Saturday evening banquet...whew!) 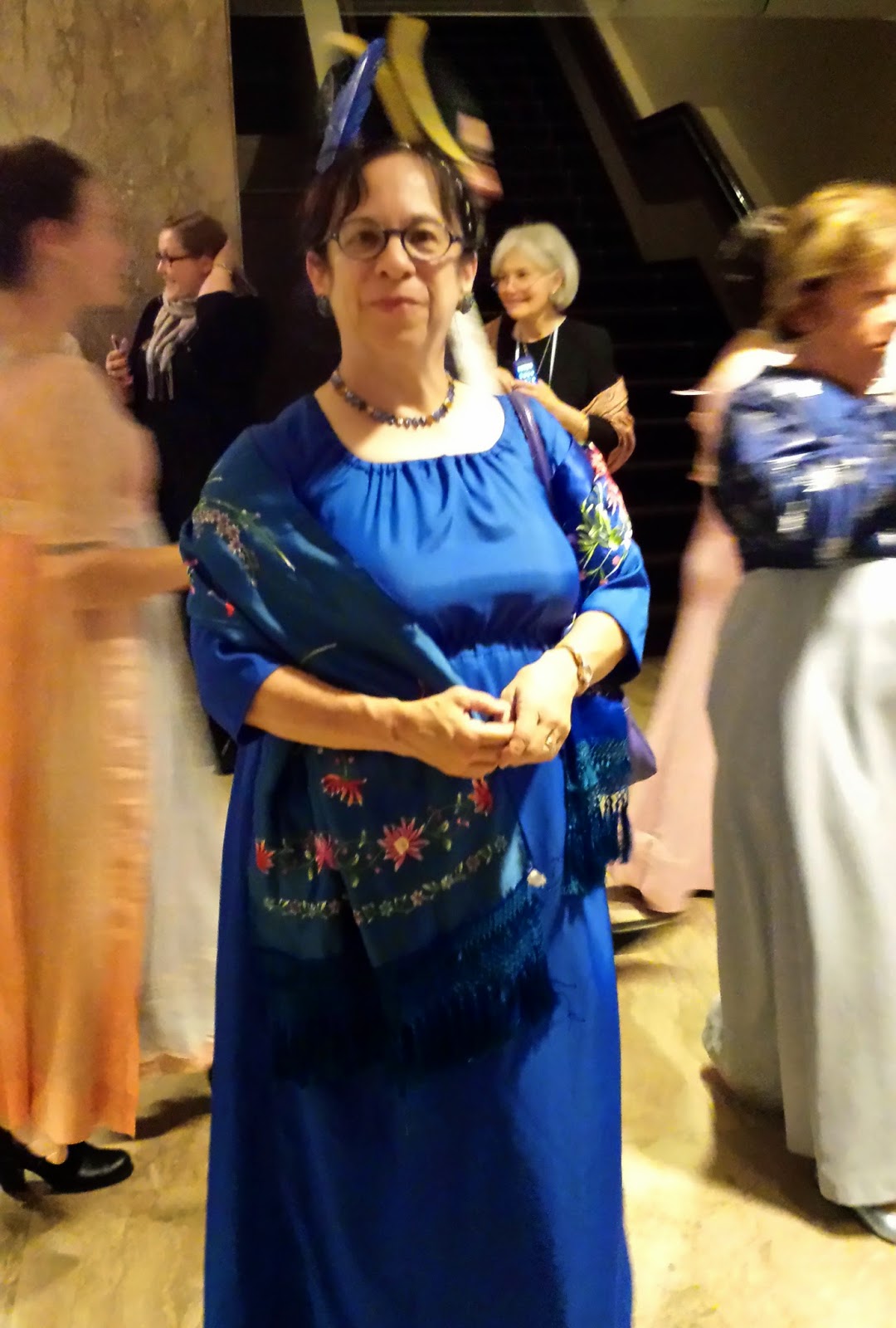 Another view of my couture gown from the House of Pierson 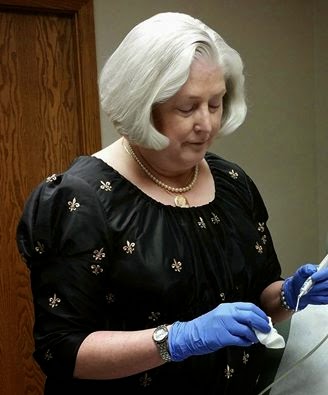 Carey wears her own elegant gown to work!


On Friday evening, the night of Diana and Syrie’s tour-de-force, I ran into Karen Doornebos, another Austen Variations friend, and found out that she was in the play too, but needed help getting into her gown (see above, paragraph 2…). She gave me the time she would be dressing, and I packed up needles, thread, hair doodads, flowers, hairpins, and jewelry and stepped into the elevator, generating much comment about the red and white striped bandbox I had all my accessories in…there was also considerable disappointment when I admitted that there was no bonnet in the bandbox.


I won’t go into details about the dressing experience…we dressers need to be discrete about our activities…let us just say that it involved one zipper, two safety pins (not Regency approved), bobby pins, a pearl hairclip and a pearl necklace (fake, but hopefully not colored with fish scales). You may imagine the details yourself.


I took my bandbox and retired to the auditorium, ready in case of theatrical emergencies, but everything was prepared so I found a seat on the third row aisle where I could see the entire show without getting a kink in my neck looking up at the stage. I prepared to be entertained.


While awaiting the curtain, I was a little confused by the piano tuner tuning the grand piano in the room…but later realized that it was for a concert later in the evening. The audience straggled in and a glance around just before curtain time revealed that there was standing room only. There was a buzz of conversation and a rustle of programs as spectators speculated about the props that were visible on the stage, and which actors were playing which parts. They did not have long to wait…


Reading Diana’s version of the writing and staging, I am even more impressed that she and Syrie were able to bring together people from three countries and, with two short rehearsals, pull off a comedy that called forth cheers and applause, boos and hisses. There is no question that Mrs. Norris stole the show (as we know she always tries to do) and Diana did an outstanding job being mean, nasty, dismissive, and patronizing. I have never seen an Austen-based entertainment that actually engendered hissing at the villain in the piece!


I have to say that Julia and Maria Bertram did far too good a job at cat fighting…I hope this was just for the stage ladies…ahem. The best part about the vignette was that the actors obviously enjoyed their parts! I do still wonder what Mrs. Norris did with that roll of green baize with which she absconded when Sir Thomas returned from Antigua earlier than expected…


The theater-goers trickled out after the play…far too busy laughing and talking about the play to hurry on to the next entertainment. They were still talking about it the next night at the banquet and ball, and I’m sure will continue to do so until the next AGM.


The ball on the following night was an excellent example of how difficult it is to put together a multinational production, when the Austen Variations gang tried to get together for a picture…we finally managed to get three of us in one place (unfortunately, we could not find Syrie when we had the inspiration for the photo, but you may look on Diana’s Facebook page and this blog for pictures of the cast)…Diana Birchall in her new royal blue gown and beautiful embroidered shawl, Karen Doornebos in my pearls and pearl hairclip (and her new ball gown), and me in my fleur-de-lis gown. I think we made a respectable showing! Somehow, even though Diana and Karen wore heels and I wore ballet slippers, I managed to tower over their delicate selves…but then being tall was one of the signs of Maria’s and Julia’s superiority…I will say no more than that.


Well, except to look forward to a reprise of Diana's earlier play, "You are Passionate, Jane," with herself and Syrie playing respectively Charlotte Bronte and Jane Austen, which may happen at the 2017 JASNA AGM in Huntington Bedach, California, with a "Jane Austen in Paradise" theme.  Oh, dear, how can I make a Regency gown look more…Brontë?

[From Diana] No worries, Carey, I found a pair of gorgeous blue feathered angel wings at the Salvation Army, which will look sublime with the blue gown!  A snood, and I'm a dead Bronte...