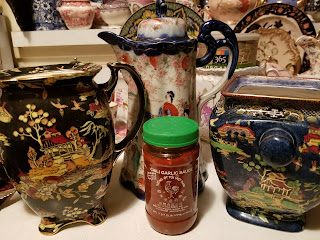 Chinese chili and garlic sauce - a staple of my cooking!

I've been posting my Chinese dishes on Facebook, and people have been asking me for the recipes, so here they are, on my blog. I'll copy some of the things I wrote on Facebook - and add the recipes.

When Peter and I moved to California in the 1970s, we bought a set of cookbooks in Chinatown, and set about teaching ourselves to cook Chinese food. The book, Pei Mei's Chinese Cookbook, has proved to be even better than we knew. It was a kind of breakthrough publication, that came out of an early (1960s) Chinese cooking show in Taipei, and is described as being "the first to teach authentic regional style Chinese cooking to the public," demystifying Chinese cooking techniques. Apparently, the three volumes became de rigeur for every bride, and were passed down in families in both Asia and America. The recipes are divided into regions (Shanghai, Canton, Szechuan and Peking), and the variety and quality was good enough to last a lifetime. So in a sense, I was one of the brides for whom this book became seminal! 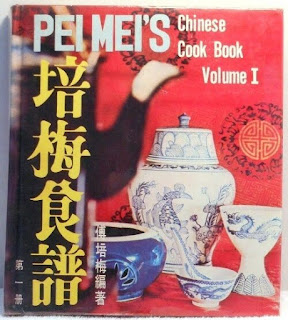 Forty years later, the dozen or so recipes we liked most and incorporated into our family's routine, have naturally matured, and become refined - to our taste anyway! We've never needed another Chinese cookbook, but we've got one in the family, anyway. This was the "Chinese Japanese Cookbook," the first published in America (1912), written by my grandmother Onoto Watanna (Winnifred Eaton) and her sister, Sara Bosse!  Pioneering work though it may be, it's nowhere near as good as Pei Mei - in fact, I think the sisters begged or stole the recipes from local chop suey joints in New York, and they taste like it!  But it's a fascinating cultural artifact, as procuring ingredients and cooking in the primitive kitchens of the time, was quite a challenge, over a century ago. 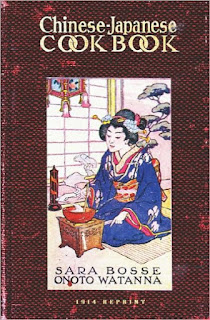 And above is the book I wrote about my grandmother. Now you see where I got my interest in Chinese cooking!

At the same time we bought the cookbooks, we bought The Wok, in Chinatown in 1972 for $12. They didn't sell them anywhere else, back then. It has survived and, seasoned to black inside, it has cooked literally thousands of our Chinese dinners over the decades. This dinner is lo mein with barbecued pork and Chinese peapods. 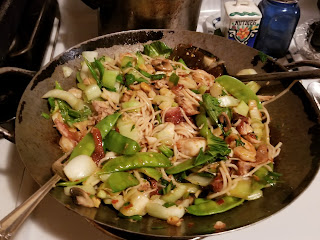 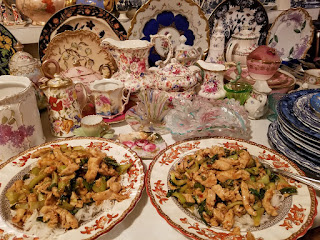 This is another great favorite.  I collect old china from thrift stores, and this is served on Coalport Indian Tree plates!

Put on rice. Beat 1 egg white and 2 tsps. cornstarch in large bowl. Marinate chicken pieces in it for 15 minutes.

Fry chicken in the wok in a cup of hot oil, stirring often; drain thoroughly on paper towels. 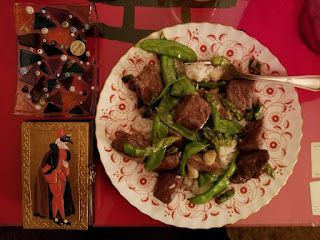 Another great favorite, the classic Beef with Oyster Sauce. This is served on our home-painted red coffee table with black Chinese characters, and shown with a couple of souvenirs I brought back from Venice. The plate is Royal Crown Derby.

Ingredients:
2 lb lean beef, cut up in squares.
Bunch of scallions, cut up.
1 tsp chopped fresh ginger.
2 Tb. oil (I use olive) that's been cooked few minutes.
1 cup oil.
Maybe half a cup of Chinese peapods, same amount chopped asparagus or broccoli, or whatever you like - you can use more veg, too.
1 Tb. wine (I use a cheap white)
1 tsp sugar (I use stevia)

Put on rice. 1) Boil peapods (and other veggies if desired) for 1 minute. Remove from pot, rinse in cold water, drain.

2) Season and heat in wok, 2 TB oil with 1 TB wine and 1 tsp sugar. Stir-fry the vegetables in this, over medium heat, only 1 minute. Remove pods to plate (with the wine sauce), wipe wok clean.

4) Use another 1 Tb oil to stir fry a chopped scallions and chopped ginger 30 seconds or so, then add beef and toss quickly over high heat. Blend in the seasoning sauce. Add pea pods and veggies, stir, serve over rice. 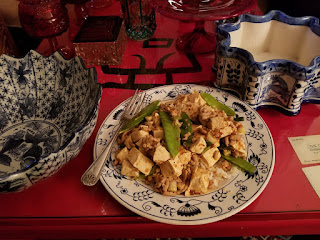 I know lots of people don't like bean curd, but this classic and easy to prepare Ma Po To Fu dish is delicious, with the bean curd taking flavor from the ground pork, garlic, ginger, and spicy chili. The plate, an old Royal Crown Blue Onion, is one of a few of my grandmother Naomi Finkelstein's I have left (Jewish maternal grandmother - other side of the family!)  I remember the plates from earliest childhood and they were what started me on my long and happy blue and white road.

Cover the wok and cook for 3 minutes, stirring once. Thicken with cornstarch, then removed from heat, add black pepper and serve over rice. 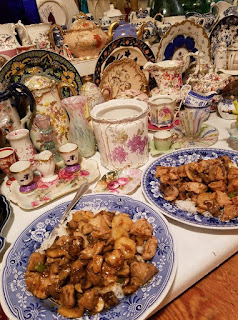 Another very delicious dish, though I admit in the picture above I didn't cut the pork into any strings - it's just "meat for pork stew," as is, from the supermarket!  Here it is in the kitchen, on generic reproduction Spode plates.

Heat another 1 Tb. oil, stir fry garlic, ginger, water chestnuts, mushrooms, and pork, in that order. Last of all add the seasoning sauce, stir well and serve over rice. 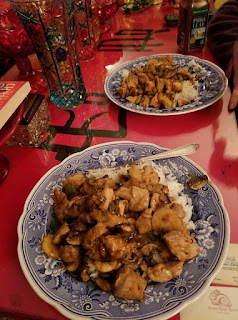 And here it is on our Chinese red coffee table!

Now, last but not least, here is our piece de resistance!  Yes, I know, won ton soup doesn't sound very exciting. But this home made soup is one of the best dishes I've ever made. Hand made dumplings with ground pork, cilantro, spinach, bok choy, mushrooms, scallions, black bean sauce, chili, garlic and ginger - cooked in a lemony chicken soup with shrimp. With fresh ingredients, home cooking beats what you get in even a good Chinese restaurant, by a mile!  And I'm very proud to say that my friend and neighbor Pam, who shared the soup with us, afterwards wrote to me:  "Your soup was the very best I’ve ever tasted, anywhere, ever. If I had eaten it in a restaurant I would return just for the soup. It is your masterpiece!"  And she is not a flatterer (smile). 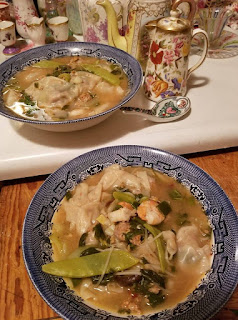 WON TON SOUP OF THE GODS

One of the reasons this soup is so good is that the broth is that old canned stuff by Swanson - not one of the new waxed-package low salt broths I usually buy. This Swanson's broth, mixed with a ton of lemon, is simply sublime in this soup. Doubtless because it is high in sodium!  Maybe the lemon cuts it? In any case, it's what I use, and won't substitute. It tastes better than even my home made turkey broth that I make at Thanksgiving. I do try to cook with as little salt as possible, but make an exception for this one stellar dish!  (And by the way, save some of the won tons to make fried won tons, they're stupendous!)

In a large bowl, mix the pork, half the scallions, most of the vegetables, half the mushrooms and half the cilantro, with the soy sauce, black bean sauce, garlic and ginger. Let sit 15 minutes, then form into wontons, putting about 1/2 tsp. of mixture onto each wonton skin. Wet two adjacent edges of skin. Fold over in a triangle, wet the 3 corners and fold over into a wonton shape. Make lots of them - we used the whole package - but reserve a few if you'd like to pan-fry some!

Heat the chicken broth in a big pot. Put in well-washed, torn-up spinach leaves, the rest of the mushrooms, cilantro, lemon juice, balsamic wine vinegar. When it comes to a boil, add the wontons, a few loose Chinese vegetables, shrimps, and the remains of the meat mixture (it's nice floating around loose). Simmer 5 - 8 minute, or until a wonton, cut open, looks and tastes cooked through.

Makes 4 big bowls like the ones in my picture!

There. I hope you like my cooking, but if you don't, remember I make it the way we like it - and that may not be the way you like it!  So experiment till you get it to your own liking. That's what I did!

ADDENDUM:  What happens when you pan fry leftover wontons the next day: 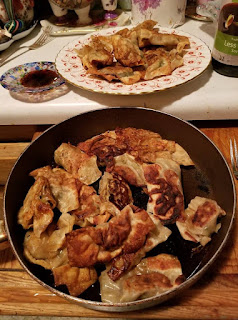 Specifically, they are all gone extremely swiftly!  And here is Paul, tucking into the meal, which had chicken in black bean sauce as accompaniment to the dumplings. He looks pleased, doesn't he? 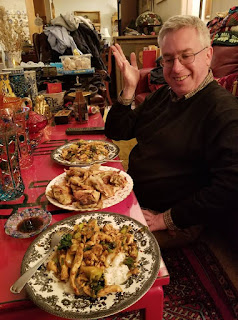 It was rather like Lewis Carroll'ls "The Walrus and the Carpenter":

"And that was very odd, because
They'd eaten every one!"
As a final fillip, a Chinese farewell featuring a figurine that once belonged to Peter's grandfather, Febus Kobak (@1880 - 1957) 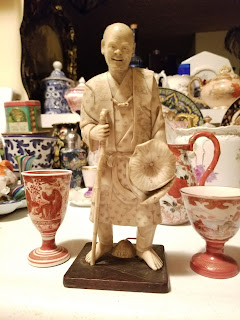 Posted by Diana Birchall at 3:52 AM