Persuasions Behind the Scenes - now free! 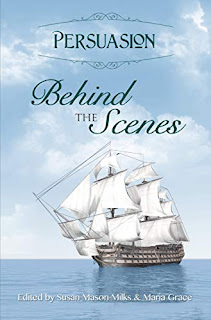 The Austen Variations collection Persuasions Behind the Scenes is now available for FREE, at all major booksellers. I have several "scenes that Austen never wrote" in this volume, and here's one of my favorites, a conversation between Sir Walter Elliot and his daughter Elizabeth, called "Can We Retrench?"

Can We Retrench?  by Diana Birchall

"It had not been possible for him to spend less: he had done nothing but what Sir Walter Elliot was imperiously called on to do; but blameless as he was, he was not only growing dreadfully in debt, but was hearing of it so often, that it became vain to attempt concealing it longer, even partially, from his daughter. He had given her some hints of it the last spring in town; he had gone so far even as to say, "Can we retrench? does it occur to you that there is any one article in which we can retrench?" (Persuasion, Jane Austen)

“Papa,” said Elizabeth Elliot to Sir Walter, “I must have some new gowns.”

It had been a busy day, as all London days were, when father and daughter were up for the Season. Expensive dinners were given and taken; engagements at Court enjoyed; and in the afternoons Sir Walter liked to saunter over to the House of Commons with his handsome daughter, or for an airing to see and be seen in the chaise and four. Today he had been hobnobbing with some cronies at his Club while Elizabeth went shopping for various female articles.

Now they were home, to dine by themselves before spending the evening at a dance at Almack’s. Sir Walter looked up from his chop. “I think you are right, my dear,” he answered. “I have noticed you not looking quite the thing.”

“Why, Papa, I hope you do not think me faded!” Elizabeth exclaimed.

“No, no. To be sure not. You are as blooming as ever, certainly. But your gowns – I was noticing, yesterday when we were paying calls, that some of the ladies’ costumes seemed superior. That primrose day dress with the streamers Lady Beresford wore, became her very well I thought. That muslin of yours looked a bit limp beside it.”

Sir Walter frowned. “Not that, I hope,” he said gravely, “but it is not often you make such a poor show. What in heaven’s name induced you to wear such a plain dress? And – and, when we went to the opera, your cloak – “

Their eyes met. “It has holes in it,” Elizabeth said grimly, “and Sally has not been able to repair it properly. She has not the skill.”

Sir Walter looked discomfited. “Well,” he said at last, “you have made your point. You do need a new wardrobe. Why did not you have some new things made before we came to London?”

Elizabeth averted her gaze, and reddened. “The dressmaker’s bill,” she muttered.

“Oh, I see.” He made a face. “Those small market town dressmakers, what a pother they get into about the least thing.”

“She has not been paid in three years.”

“Ah. Well, she should consider it an honour to be allowed to dress you at all! She can make a good deal of money merely by being known as dressmaker to Miss Elizabeth Elliot of Kellynch-Hall, you know.”

“She doesn’t see it that way,” sighed Elizabeth, “and – and she told me to take my business elsewhere.”

“What insolence! But then, why did you not get some pretty things when we came to Town? There is a Miss Bell, I know, whom all the ladies speak of as so clever. Did she not make Mrs. Harrison’s latest ensemble – that lemon-coloured Russian velvet gown?”

Elizabeth was dabbing at her eyes now. “Yes,” she sobbed. “Miss Bell is all the mode, but when I went to see her about a spring wardrobe, she told me – she told me that she would not dress me, because,” she burst out with it, “my credit was not good!”

Sir Walter pushed aside his dinner and rose to his feet. “She dared! A mere tradeswoman! And for her to turn you away, an Elliot of Kellynch-Hall, when you owe her nothing!”

“Not quite that, Papa,” Elizabeth managed to say.

“Don’t you remember, she did make some things for me last year – the spotted sarsanet that every body thought was so pretty, and, and the cloth-of-silver pelisse? And – “

“And we did not pay her.” Elizabeth hung her head, looking down at her plate.

There was a silence, and all Sir Walter could find to say was a half-hearted, “I do not know what has become of trades people these days. No proper respect to a gentleman’s family.”

Father and daughter looked at each other despondently. “I have lost my appetite,” sighed Sir Walter.

“Come then, let us sit and have a look at the Baronetage. That always makes us feel better, does it not? We can compare how much newer the other creations are than our own ancient family…”

At that moment a loud knock at the door was followed by running footsteps. Father and daughter started, as the housemaid, Letty, entered breathlessly, with a man hard on her heels, who pushed his way past her.

“Letty! What is the meaning of this!”

“To what do we owe this unwarrantable intrusion,” thundered Sir Walter, looking disdainfully at the stranger, who appeared to be a stout man of business in middle life.

“Harold Cadgwith, sir, of Gudgeon and Cadgwith. The banking concern. You owe us a note, you do, for eight hundred pounds, eighty and sixpence.”

“The impertinence of you! Get out of here at once!”

“Begging your pardon, sir, but I won’t. Not until you have paid me or issued a promissory note from another account. I can call the constable, and have you hauled before the magistrate. This debt has been running for eighteen months, and my bank won’t have it. You’ll go to debtor’s prison if you don’t settle this, lordship or not.”

Sir Walter was shaken, but did not lose his composure. He withdrew a card from his breast and held it out with such an elegant air that the man took it, wordlessly.

“That is the direction of my man of business, John Shepherd,” he said in as lordly a tone as if Cadgwith had been the debtor, not himself. “I will write to him tonight, and order him to settle with you. You have my word of honour as a gentleman. Now kindly withdraw.”

“I’ll go,” said Cadgwith, “I’m going. I’m going to see this Shepherd, that’s what, and for all your fine airs, your lordship, it’s gaol for you if your word’s no good, certain sure.” He strode out and Sir Walter sank into a chair, his head in his hands.

Elizabeth was white with shock and horror. Eventually, her father rose and shuffled over to his writing-desk, unlocked it, and pulled out a terrible mass of bills, dunning-notices, and cancelled accounts. He stirred the heap of papers uncomprehendingly. At last he looked up at his daughter, who stood beside him, unable to speak.

“Elizabeth,” he said, “can you think of any way in which we might retrench?”

If you enjoy reading Persuasion variations, you can enjoy a whole book of them for free!  Here's the Amazon link:

Posted by Diana Birchall at 4:19 PM

If you're attempting to burn fat then you certainly need to start using this brand new custom keto diet.

To design this service, licensed nutritionists, fitness couches, and top chefs have joined together to develop keto meal plans that are productive, suitable, price-efficient, and enjoyable.

Since their launch in January 2019, 100's of individuals have already transformed their body and health with the benefits a good keto diet can offer.

Speaking of benefits: in this link, you'll discover 8 scientifically-certified ones provided by the keto diet.

Please share your story with us, we will feature you. Visit ACN - Latest News of Japan | Trending News in South Korea | China Business News

Final Fantasy XIV players can use FFXIV Gil to do too many things.

Thanks for sharing such a wonderful blogs.its very useful.It is a site where you can watch Korean dramas, movies, webtoons, and videos for free. Click our website to see https://mtpang.com/%eb%a7%81%ed%81%ac%ec%82%ac%ec%9d%b4%ed%8a%b8/

I wonder why the other experts of this sector don’t notice this. You must continue your writing. I’m sure, you’ve a huge readers’ base already! want to learn more? click the link here 바카라사이트

I would appreciate you that you pick up an important topic to write a thoroughly informative post on. I hope that you never stop and keep posting such valuable content

After becoming MMORPGMALL.COM VIP, you can also delight in up to 10% discount. After MMOARPG Lost Ark is officially released, you can purchase most affordable Lost Ark Gold at XMMOMALL. Maintain looking ahead!