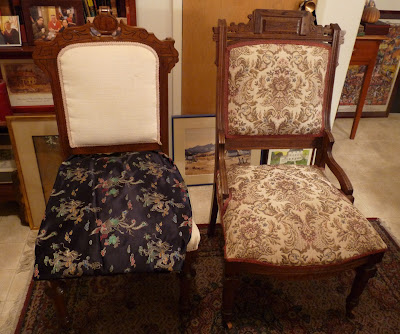 Chairs to mend, old chairs to mend
Rush or cane bottom, old chairs to mend
Mackerel, new mackerel.
Old rags, any old rags
Take money for your old rags
Hare skins or rabbit skins!
- Old English song (as sung by Senior Chorus, High School of Music and Art, 1963)
It all began when I bought a pair of old chairs at the Salvation Army, $20 each.  I liked them.  They looked, when googled, like something called "choir chairs," but later a knowle﻿dgeable friend identified them as Eastlake chairs, a kind of Victorian/Edwardian, pre-Craftsman sort of design invented by one Charles Eastlake, and mostly made between 1880 and 1920.  Here they are in their natural state: 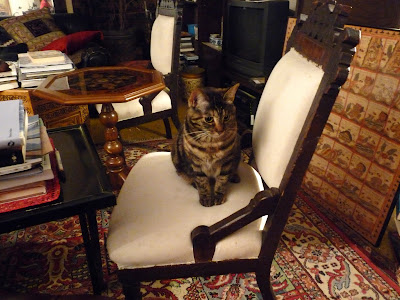 And here is the antique red Chinese silk I planned to cover them in: 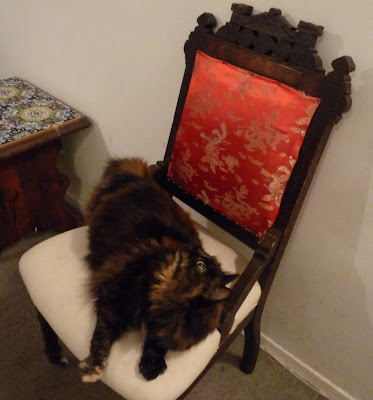 The cats approved, and all seemed well - until the cleaning woman "accidentally" threw one out!  (Chair, not cat.)  You may well wonder how she could accidentally throw out a chair, but it was sitting in the front hall, and she always thinks things left there want to be taken out.  (She speaks no English, but for the purposes of this story you need only know that she will retain her job, but throw out no more chairs.)

Wanting to restore what was lost, I hunted on eBay, and found some 96 Eastlake chairs, average price $350 for a pair.  Yes, well.  There was only one listing for really affordable ones - two Eastlake chairs, $39 and $29, out in someplace called Agua Dulce in the Santa Clarita Valley.  The people would not ship them, they had to be picked up.  So I inquired if they'd sell them both for $40, if I drove out there.  Yes, they would.  So I drove...and drove...fifty miles each way for the chairs!  But it was an adventure, I wanted an outing, and I wanted to see what life was like in one of those little canyon towns you usually speed by, unseen. 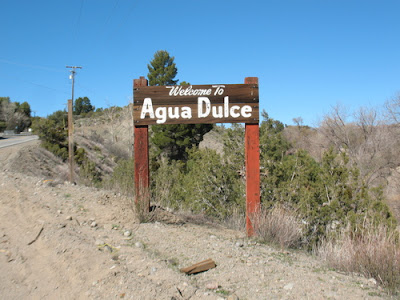 Agua Dulce is on Highway 14 on the way to Mammoth, so I'd passed the turnoff and knew where it was; and I knew that in these dry foothills there are canyons of old California beauty.  I'd seen one when visiting the set of The Jane Austen Book Club, which was filmed on the old Disney ranch in Placerita Canyon where Spin and Marty was filmed in the 1950s.  Beautiful golden hills.  So I was intrigued to visit this little foothills town.  It's a peculiar California mixture...ranches, vineyards, horses, movie sets, rich people, poor people.

The ones I was visiting were on the poor end.  They lived up a borderline non-negotiable, incredibly narrow, winding, heavily pitted, steep dirt road with a sheer mountain drop on one side, and when I got there they mentioned that hardly anybody is willing to drive up that road.  But I'm used to mountain driving from all our Sierra hiking trips, it looked safe enough, being dry; and I drive a sturdy SUV 4Runner truck.  These people, an older Hispanic couple (well...probably my age, but having had a hard life), lived in a kind of shack, or possibly something that was once a camper, amongst a heap of antique junk, but they had a beautiful valley landscape spread out below them.  They lived with their profoundly mentally handicapped son, and explained that they were on a small fixed income and "eBay keeps us going."  They used to have an antiques store, but with bad times people stopped buying.  I felt bad for having bargained with them, but my mind was primarily on getting back down that road alive (Paul seemed to fear I might be eaten by some Santa Clarita Valley Sawney Bean). 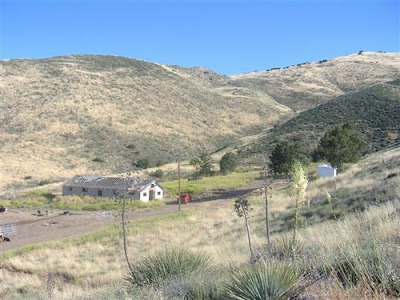 This isn't their place, but it's sort of what things looked like around there.  The chairs were good, better than I'd thought from the eBay pictures (they said that years ago they could have sold them for a lot more, but that dirt road must inevitably bar the madding crowd), so I put them in the SUV and started to drive home.  Just then the heavens opened!  I got down like a jackrabbit before the dirt road could turn muddy, or worse, drown me in a flash flood.  And drove home to L.A., where I then had to drive my reading group friends to the elegant Samuel Johnson dinner at the Huntington Library in San Marino.  Quite a contrast, and another 75 miles on top of the 100 I'd just done; but it was an interesting day.  And I have my chairs!  I think I'll put black silk Chinese fabric on the smaller, white velvet chair, but I'll keep the brocade one as it is.  I kind of like the brocade... 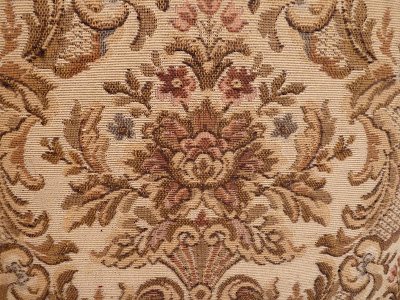 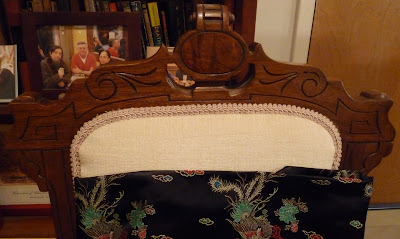 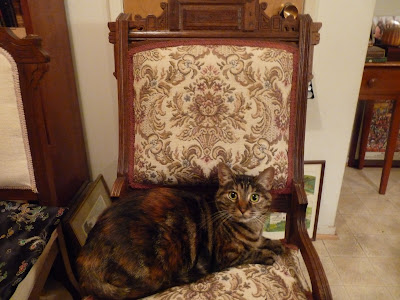 The approval of Pindar

What an adventure, Diana! I love the chairs and the brocade (prefer that to the Chinese silk, myself). I'm on a chair hunt myself but more sitting than dining if you know what I mean. Lovely story. Can't wait to get to California and see these places for myself! Barbara