Despite dozens of Facebook warnings the night before my flight, like this one: "Why are you travelling in this mush? Be safe. I would cancel and wait for spring if possible!" plus agitated calls from both mother and mother-in-law begging me not to make such a "dangerous" trip into a New York paved with lethal Black Ice, on February 5 I did indeed take flight. Here are Excerpts and Embroideries from my emails home. 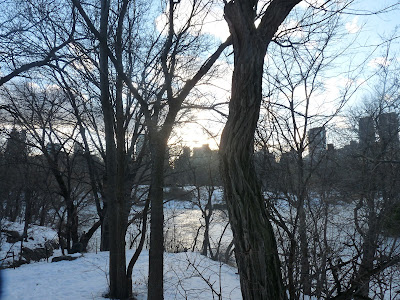 Not a bad flight on Jet Blue, but I only had a couple of hours sleep and am an anxious flyer, so it's always an ordeal. Plane left an hour and a half late because they lost a lightbulb. Then there was heavy mist at JFK and we had to circle for another hour because of "congestion," which wracked nerves further. But the car I ordered was waiting for me, and I was at my cousin Ezra's house on the Upper West Side by 10 PM.  Felt tired and muddled (accidentally left reading glasses on plane, automatically adding $300 to the $250 airfare), but went out to a neighborhood Indian restaurant and had delicious curried goat, which restored equanimity.  Whatever it took to get there, I was in New York! 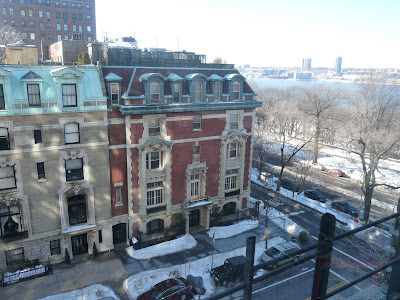 View from the window
﻿
﻿Slept well and woke up to a beautiful soft sunny day, temperature 49, and out the window a glorious view of Riverside Park, the Beaux Arts mansions, and the snow-fringed river. Just a little snow was left in the gutters; the streets were dry, and my big thick Salvation Army hiking boots seemed like an overstatement. So I sauntered out into the New York streets, securing a creamy cappuccino and a Metrocard, before meeting my Hunter friends for lunch at Chef Ho's Peking Duck on 89th and Second. We were eight: Marianne, Mickey, Priscilla, Te, Debbie, Barney, Nancy, and me. And what a wonderful, warm, chatty lunch of old friends it was. (We celebrated the 50th reunion of our sixth grade class at Hunter College Elementary School a few years back, and the party's still going on.) We ate Peking duck, dumplings, sesame noodles, minced chicken lettuce leaves, and spicy string beans. Afterwards, several of us went to the thrift shop next door and had a revel. Not such great prices as in Santa Monica, however, and I bought nothing; but it was fun. 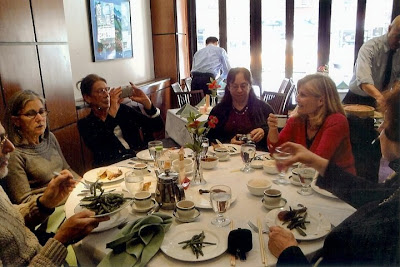 ﻿Hunter lunch
Then I took the Second Avenue bus down to Peter Cooper Village, where Peter's parents live. Everything has looked the same there since 1948, when the family first moved in, though his mother at 88 is now more bent over and has more trouble walking than last year. Spent a pleasant hour with them, then took a cab crosstown for a lovely Indian dinner with my first cousin Anne, her husband Jim, and daughter Joanna, a bright personality who keeps me in touch with the current 13-year-olds of this world. 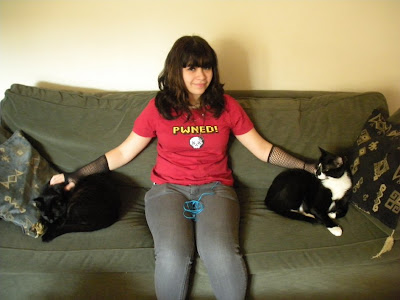 Joanna, cat person
A very warm and happy evening, and then I took the subway back uptown, to the apartment on Riverside Drive that is the scene of so many childhood memories.  Then it was the home of my dear great-uncle Louis, who lived there since time out of mind (probably the 1930s), and we always went to seders there. It's been modernized, but the original seder chairs are still there. 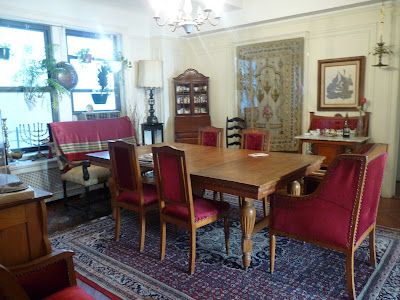 Seder memories
Monday
Another lovely day, still warm, in the 40s, sun and clouds. Bad dreams from the horror thriller I was reading for work, and got up too early (a rarity in my life, that), but repaired self with Starbucks. Crosstown bus to 96th and Third, then caught the bus to Riverdale, in the Bronx, where my mother is in the Hebrew Home for the Aged.  I'd thought it would be snowier, because reports are that there's more snow and ice outside Manhattan, and the Hebrew Home's grounds on the Hudson are country-like; but it was dry, and I was fine without the boots. My mother was very glad to see me, and we had a very pleasant time, talking over news and memories of various members of our once large, now smaller, clan. 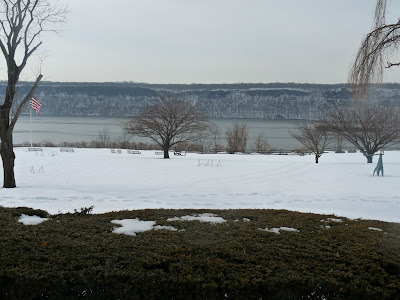 View of the Hudson River from the Hebrew Home
Took the 4 PM bus back, and got off at Central Park West and 81st. From there I had a lovely West Side wander, past the Museum of Natural History where I bought a New York salted pretzel with some anticipation, only to find that, like so much in life these days, they have been denatured and now taste like they were baked by MTV. Infinitely more satisfying was a visit to Zabars, mercifully unchanged, where I bought some truly divine nova. Reached Epices du Tratteur just in time for dinner at 6:30 with two Hunter friends, Te and Eva. We had a lovely warm wonderful chat for more than 3 hours, while enjoying Moroccan/Algerian food - started with a bric, which is a thin fried filo pocket filled with egg, potato and tuna, followed by lamb curry. Great evening, great talk, ranging from Tunisia (where they'd both been) to New York life, and of course school reminiscences - my favorite was Te telling about how she, Marianne and Debbie were once in a play based on Henry Wadsworth Longfellow's thumpingly cloying 1860 poem The Children's Hour. I have no recollection of the event, but apparently Marianne played Grave Alice, Te was Laughing Allegra, and Debbie was Edith with Golden Hair.  Hilarious, though I cannot imagine what inspired any Hunter teacher to make this part of our education. Here are a few stanzas to jog your memory:
Between the dark and the daylight,
When the night is beginning to lower,
Comes a pause in the day's occupations,
That is known as the Children's Hour.

I hear in the chamber above me
The patter of little feet,
The sound of a door that is opened,
And voices soft and sweet.

They almost devour me with kisses,
Their arms about me entwine,
Till I think of the Bishop of Bingen
In his Mouse-Tower on the Rhine! 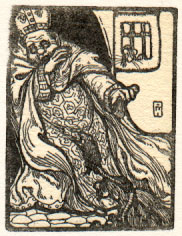 Bishop of Bingen being devoured by mice
Do you think, O blue-eyed banditti,
Because you have scaled the wall,
Such an old mustache as I am
Is not a match for you all!

I have you fast in my fortress,
And will not let you depart,
But put you down into the dungeon
In the round-tower of my heart.

And there will I keep you forever,
Yes, forever and a day,
Till the walls shall crumble to ruin,
And moulder in dust away!

Damned sinister.  Another one of these things that would probably have the poet arrested as a pedophile today.  But, good heavens, how I do love the Internet.  I just looked up that Bishop of Bingen story.  Do you know he was a greedy man in the 1300s who hoarded food during a famine, until everyone died and the mice ate him up in his Mouse-Tower?  Nice story, I don't think! 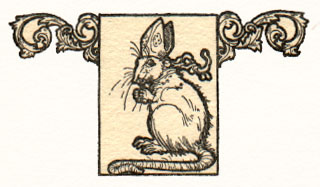 But I digress.  How does the city look to me this trip? There doesn't seem to be the level of fashion and luxury goods you used to see, but that could be because it's winter and everybody's wearing down jackets. A few stores have desperate sale signs, but not as many as at home, though I was shocked to see a really high number of closed stores and big sale signs emblazoned up and down Madison Avenue in the 80s.  Of course the rents are astronomical there, but I have never seen such a sight in my lifetime and never imagined such a thing - Madison Avenue!  Still, no hordes of homeless people, unlike in Santa Monica, but that may be because people can't sleep out in such cold. I've only seen one homeless man so far, in a sleeping bag near Zabars, talking on a Blackberry. Incidentally, that's another social change - seems like every third person, whether sitting on the bus, walking, or whatever, is using a smart phone. Reminds me of two visits to Dublin I made just a few years apart, one before cell phones, one after; it was like a different century.  Here, it's not something new - but the proliferation is astonishing. 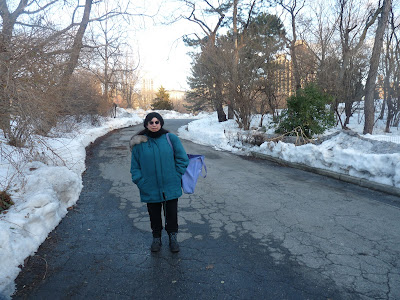 Great to read about your visit to New York - you busy bee!! Have enjoyed seeing Joanna at several stages in her life - now on the verge of young womanhood - or even in it already by the look of her. I know just what you mean about Dublin! Visiting often between 25 and 30 years ago it was like stepping back in time and then with a 12 year gap between the next visit suddenly it had a jaunty contemporary continental (as in European) air about it. Not sure what it would be like now having been so hard by the credit crunch - probably shades of Madison Avenue. Thanks for the post - look forward to reading the rest of the story. Barbara

Wonderful blog...great photos--but I beg to differ on "The Children's Hour." I don't find it sinnister at all. My father used to quote it at the dinner table, and it was meant to be an expression of affection. The ending was, I think, meant to be an allusion to our mortality...and how all things pass away, which will include their childhood...which the narrator is already anticipating...

Hi Linda - no, I don't seriously find The Children's Hour sinister. I was joking that nowadays an innocent story about little girls climbing an "old mustache" of a man would probably be looked at in a different light. Just as nowadays Charles Dodgson is seen as creepy in retrospect.

Just to say: quite right, there are sinister currents there. Longfellow had real depths in his poetry. Nowadays we have to go to Randall Jarrell to get an equivalent ambiguity and it's more sentimental.

I enjoyed reading this blog because it told of happy good times -- glad you enjoyed yourself and envied you those times in Central Park -- but also did not ignore the state of the city in this time of the "Raw Deal" (no effort to stop foreclosures, no effort to provide any jobs for huge proportion of the people).

Here in Alexandria, Va we also see only the occasional homeless person. It's cold in winter here and we do have two active shelters where people really do run about to pick the homeless up -- plus a Salvation Army place. WE are a small city too. But huge parts of once thriving malls are empty.