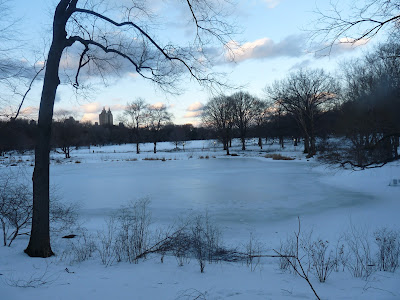 Central Park
Tuesday
Not that much sleep. Hurried down to Yeshiva University, at Lex and 33rd, the women's college, where I found the new Regional Coordinator of JASNA-NY in her lovely office-with-a-view. We had a delicious Japanese lunch with lots of interesting chat, before heading to the Pierpont Morgan Library. I was eager to see the exhibition of three centuries of literary diaries, but first I was halted in my tracks by the Shakespeare portrait. This is the newly discovered portrait, that hung in obscurity in an Irish country house for centuries, on which many later, familiar portraits have been based. The copies don't begin to capture the magic. What's fantastic is that Shakespeare's eyes are manifestly so intelligent; and one has a slight cast. He looks young, prosperous, well set up, curious, satisfied, all of that, and so, so intelligent! Copies of the later replicas are in the exhibit too and you can clearly see how badly they distort the original image. This was the only portrait painted by someone who actually saw him, and I was mesmerized; to see it is really spine-tingling. 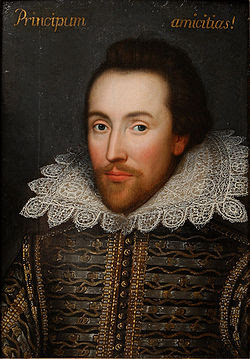 Swooning over Shakespeare
http://www.themorgan.org/exhibitions/exhibition.asp?id=44
I was also very taken with a portrait of his patron Henry Wriothesley, 3rd Earl of Southampton, also recently identified, and fascinating to study. This is obviously a young and gay pretty boy with lip rouge and long hair, dressed as a woman. The exhibition text diplomatically tries to play down the effeminacy (not gay, oh no, it's just the period), but there it is, plain to see. The two portraits together are more than enough for a fabulous dip into Shakespearean England in the heart of New York. 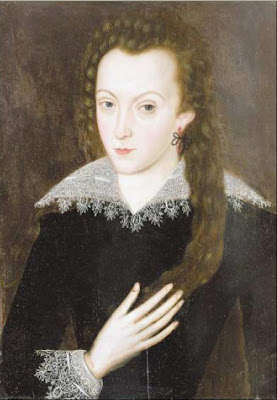 His pretty Patron
The literary diaries were wonderful too, a very rich exhibit that I could have studied for many hours. I particularly loved a touching little entry by Queen Elizabeth I, written in her exquisite handwriting at age 15. The whole thing was a fantastically eclectic collection of what seemed like everybody famous who ever kept a diary, from pioneers to magnates, Thoreau to Bob Dylan, Charlotte Bronte to a heartbreaking piece by a cop describing rescue efforts on 9/11. It was extremely absorbing, but this being one of my compressed New York visits, I had to tear away to meet my friend Laurie, who was waiting for me at the Ramble in cold (temperature had dropped into the 20s) but sunny Central Park. 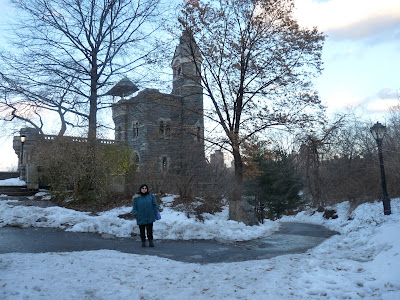 Belvedere Castle
Laurie is a former MGM friend who moved back to New York years ago, and now feeds the cardinals in Central Park every day. We walked in the cold bright sunshine, in this very quiet and snowy part of the park, where you might think you were in the country. Amid a lot of assorted birdsong, Laurie suddenly said, "Oh, I hear a cardinal!" - she can identify one squeak from another! And we ended up seeing an assemblage of nine of them, six bright red boys, three more subdued females. It was truly glorious and exhilarating, seeing these little red things flitting in the trees and against the snow, but they're almost as fast as hummingbirds and photographing them was next to useless. I missed the best shot (of course), a red boy sitting on the snow right at my feet, and these unsatisfactory ones with their little heads turned and eyes closed is all I could get! 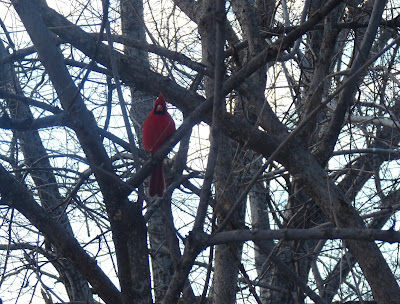 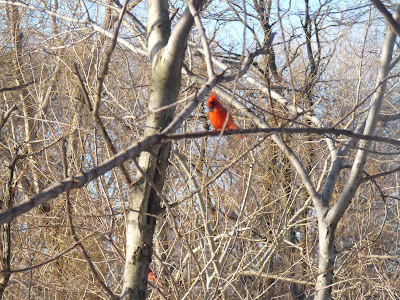 After an hour, with the sun going down (my green fur-trimmed down jacket from the Salvation Army cost $10 and turned out to be the best coat I've ever owned, light, but kept out all cold), it was pretty chilly, so we warmed up at EATS, the East Side Zabars, where we had a sumptuous spread of chocolate cake, cookies and cappucino. From there I took the bus back down to my mother-in-law Vivian's house on 23rd Street, stopping at the Metropolitan Opera Thrift store, which had some very nice things, though again, prices were higher than at home. At Vivian's we ordered in Italian food, and then I made the long trip back up to Riverside Drive and 106th via crosstown bus and subway. 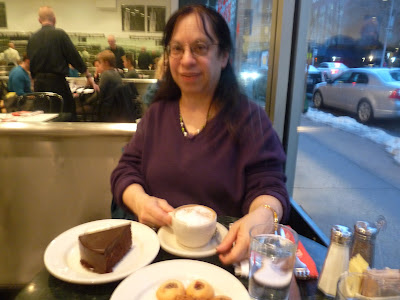 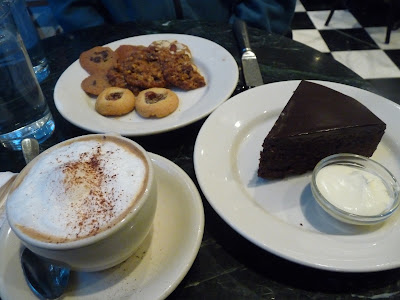 Slept in, till 10. Ate the last of the Zabars lox. Cold, sunny day. Subway down to Sheridan Square and a cappuccino at Cafe Reggio. After a short wander around the Village, took the subway back up to Riverside Drive to visit my friend Barbara, American secretary of the Charlotte M. Yonge Society, as I do every year. A couple of hours of lovely book and travel chat, over tea and sandwiches, flies like ten minutes. Then I dipped into a favorite bookshop near her, Bookculture on 112th Street, http://www.bookculture.com/
before meeting my childhood best friend, Mark, at a Starbucks on Broadway near his office. Then I went back to Ezra's to tidy up for dinner party, which wasn't far away, at another Hunter friend's beautiful, rambling 4-bedroom apartment with the most stunning panoramic view of Central Park and the reservoir that I have ever seen. The gathering was small and select, all writers, warm and friendly, and the dinner was beautiful. I am particularly fascinated by people who stayed in New York instead of emigrating as I did, and seeing what they and their lives are like today...genuine dyed-in-the-wool sophisticated New Yorkers!

Love, Denny (P.S. No More Cheese for Marshy, Please!! We do not need that cat vomiting up curds.) 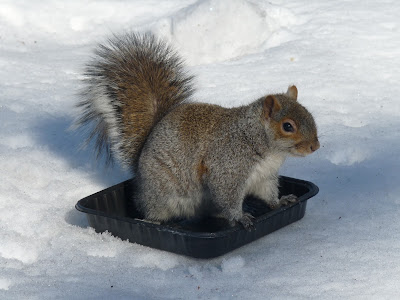 Squbble (as I called them as a child) in Riverside Park.  Food dish or litter box?
Posted by Diana Birchall at 2:44 AM

The depictions are lovely: the visit to the museum. Is that Shakespeare portrait that accepted now? I had a lunatic come to my blog on Anne Vavasour indignant at the way I described [off hand, not to the central point of the blog about Vavasour as a woman poet] De Vere who of course wrote Shakespeare's plays. The man is a professor -- or so he and a student claimed.

The morning scene of you and Laurie among the cardinals is beautiful.

Or sledge?? Diana, what wonderful literary days you spent last Tuesday and Wednesday. Was it hard work bringing this trip together and managing to fit in so many meetings each day so 'effortlessly'? When I say effortlessly I don't mean that it wasn't an effort to criss-cross New York getting from one place to another - but that you managed to get to see so many friends and family in sequence. Barbara

Ellen: It seems pretty accepted, the text stops just a hair from stating it as fact, but they put it in the "very strong probability" class.

Barbara: Yes, you picked up on the schematic nature of my trips - I do indeed plot it out in advance, email people, and make some attempt to juggle so I see the West Side people and things one day, East Side another. When all fails, I take a cab! Obviously I wouldn't want to live my life this way, but each day in NYC I have as many "big events" as I might do in three months in LA. It gets kind of stunning sometimes, to go from a museum to a reunion to a fancy dinner all on the same day - but it certainly is exciting.

Dear Diana - Am in a huge rush today, so I'm responding to your marvelous whirlwind "NYC in Winter" blog entry#2 first.

Surely Diana, no one does nyc better than you do [remind me to meet up with you in Paris or Firenze sometime soon]. First, I am so glad you got to the Morgan to see the amazing Cobbe portrait of Shakespeare. He is so incredibly self-assured. His riveting gaze, so intent, so knowing of mankind, reminds one instantly, as Mark Z. has recently said, of that marvelous Borges poem. What other treasures are languishing in darkened corners of people's houses one wonders.

And surely you were blessed in that some of the most charming of our city's creatures came out to greet you!! I am speaking here of those simply gorgeous, cathedral-sized cardinals who appeared so majestically in Central park against the dramatic backdrop of mounded white snow for you. I actually have a cardinal-friendly feeder-breeder area in our backyard that attracts clans led by alpha males who have become good friends over the years [they really do communicate with humans with special vocal tones, etc.]. But never, short of peacocks and members of the parrot family, have I seen such an architecturally magnificent display of, well, size-plumage-color combined as in your Central Park cardinal-of-cardinals!

Which brings me to the third [were you aiming for a secular Trinity??] item of pictoral magnificence - the simply luscious, satin-y soft, heavenly chocolate cake, molded with perfectly smooth Genoise icing. Surely no patisserie in Paris has seen its equal; even Vienna's Marzeipanteiggen would be hard put to match it.

Obviously your stay here was much too short.