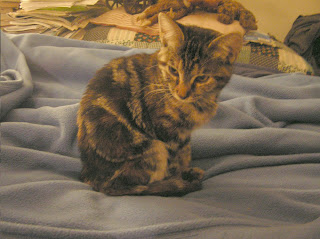 Pindar, the Beauty of the Family 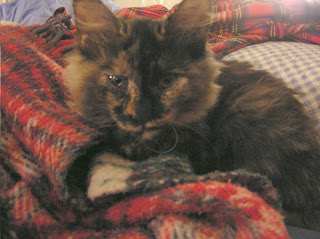 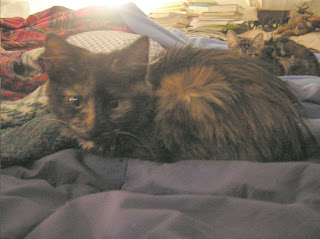 
If you are already massively bored with my cats, Cateat Emptor! I have fallen so cravenly low that (I can hardly believe it) I am writing a blog about their progress after a visit to the vet. Once I wished to be a world beating author, then I was glad to settle for being published and selling a few copies, but never in my wildest dreams did I know that I would end up no more and no less than the commonest Cat Bore in the Creation. But surely, these faces are some reason? When acting was proposed at Mansfield Park, Mr. Crawford said, "Be it only half a play, an act, a scene; what should prevent us? Not these countenances, I am sure,” looking towards the Miss Bertrams. And surely these cat countenances are some excuse for my dizzy plunge into cat besottedness. 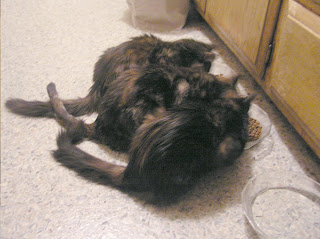 Eating in Company, a Companionable Tail


So I brought the Mesdemoiselles to the Vet. They are such good sweet angels they didn't even mind going. They got shoved into the carry case, but they only purred. Once in the car they mewed a little, but I talked to them and the sound of my voice soothed them. At the vet, I was absolutely astounded to learn that since their last visit, only two weeks ago, they have each gained A POUND!! Martial is a Five Pound Cat now. Catullus the 3 pound runt is now up to 4.3! The vets couldn't make enough fuss over them and said they are Thriving and are some of the happiest, most darling kittens they've ever seen. They also fussed over me for rescuing them from the shelter, and I said we were so lucky they turned out to be such sweet cats, but the vet said, the cats were the lucky ones, to have such an obviously loving home! They had their nails trimmed, and poor little Catullus and Martial had their narsty vaccinations and were pronounced in super health.

Pindar is still sick, and the vets say the upper respiratory infection can linger a long time, and she'll have to be on antibiotics, interferon, and lysene, until the cold is completely gone, however long it takes - could be many weeks. But they say she's fine, in no danger, very bouncy and eating well. I like these vets. Even though they're the clinic the shelter uses and you don't have an appointment but have to wait, I don't mind. I got to talk to other people who've recently adopted cats from the same shelter, who are also sick with this cold. (I even recognized their cats.) The clinic is inexpensive, they only charged for Pindar, and the visit including the two injections and all the new meds, came to $100, which seemed very reasonable. All three cats got full attention and advice (to which they did not listen) and I took them home and they collapsed in three little furry splayed heaps, utterly exhausted by their great adventure which I believe that, on the whole, they cheerfully enjoyed. And I sat down to write about it. Such a somnolent tale, it would make a good bedtime story, would it not? "The Three Little Kittens go to the Vet." Oh, what has become of me! 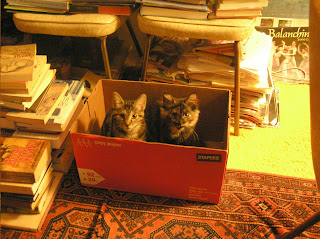 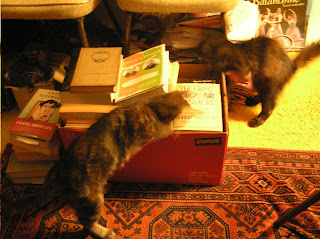 Incredibly, the book they're fighting over is...The Great Cat Massacre! Click to enlarge if you don't believe me!
Posted by Diana Birchall at 2:38 AM

Sounds like one of our vet trips... but cheaper! (We had four Jack Russells to take. Had to do it in relays.)

Isabel wrote a song to the cats upon taking down our Xmas tree. How's it going? Go over to my blog and hit the comment and you'll see how it was in the Great Hall at the Kennedy Center.

I would sacrifice all other possible achievements and accolades for that of Besotted Cat Owner. (But does one ever really own a cat? Do they not simply own one?)

Ten years ago my marriage came to an end. As I was the one going I left behind my beloved cats ginger and pickles, Darcy and bingley and oh did I miss them. I live in a small flat, out all day and now way for a cat to get in and out so no more cats for me. Over Christmas I dropped one of my daughters off to see their father and Bingley was in the front garden. He was always a bit of a loner and would only ever come to me. Had not seen him for several years and yet when I called his name and said Bingley it's me which my daughter thought was silly he came over, let me pick him up and started purring. You will not be surprised to hear that I burst into tears..

I enjoyed every sentence and picture--don't stop--

If you think you're besotted, witness me at this moment, perched on the edge of my chair because our resident poet--the elegant, remarkably elegant Taliessin--is occupying most of it . . .