A Happy Jumble of Jane Austen and Cats 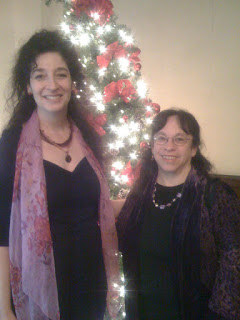 Professor Kay Young of UC Santa Barbara, and me, speakers at the JASNA-SW Christmas event 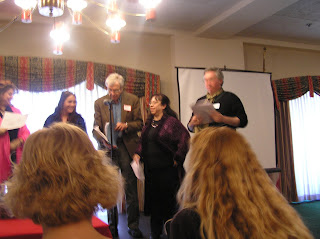 "The Courtship of Mrs. Elton"


Our JASNA-SW (Jane Austen Society-Southwest) winter meeting was a great success; about 90 people at the Los Angeles Athletic Club, which is more elegant than it sounds. The morning speaker, Professor Kay Young of UC Santa Barbara, spoke on Emma and the imagination, and after lunch I gave my talk on Mrs. Elton: The Bride from Bristol, which explores the implications of Mrs. Elton's origins and how Austen used this character as a foil for Emma. In fact, the day was rather like a quote from Emma: "For ten minutes she could hear nothing but herself." Only it was a lot longer than ten minutes, and I was drained! 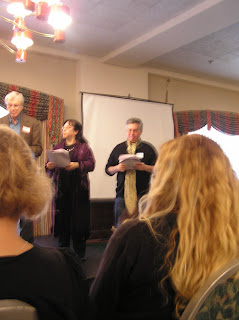 Me and Paul acting 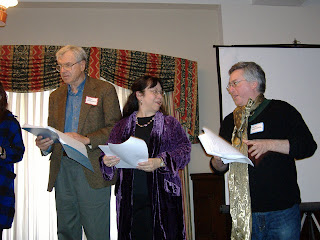 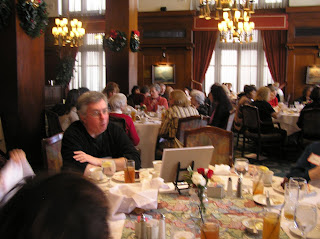 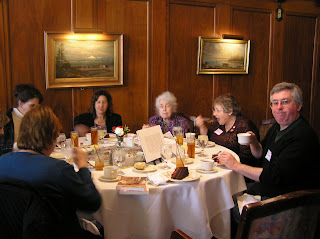 
Then there was a reading of my playlet The Courtship of Mrs. Elton. Readings have been given, to date, in Vancouver, New York, Edmonton (twice), Calgary, St. Louis, Florida, and Arizona. This one went over gratifyingly well, and for me it was special because I had prevailed upon Paul to play the part of Mr. Bird, the Puppy. This he did with enormous skill and brio, playing him as a kind of simpering Mr. Fezziwig, and rendering his poetic lines with all the ridiculousness they deserve. Very special. There were other special moments, as when my friend Natasha Zwick, playing Miss Milman, spontaneously threw her stuffed kitty across the room - just like I do Martial when she gets into my study. Or maybe you had to be there... 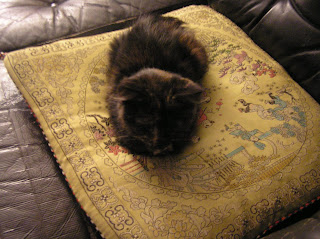 Catullus on Chinese Pillow<
Posted by Diana Birchall at 12:08 AM

This looks like a fabulous meeting. I wish I could just drive over and join you!

You all do look like you're having a good time. Your friend's scarf is exquisite. And the kitten just hunkering down.